A visit to the Art Deco Museum has been among the most popular attributes of meaningful leisure time in Kaunas in recent years. Here’s some kaunastic to those who have already experienced this apartment’s hospitality - the museum’s founders are opening another historic apartment in January 2023. The Amsterdam School Museum, located at Vytauto pr. 58, inspired the brand new illustrated itinerary in the It’s Kaunastic series, called “Art Deco Kaunas”. 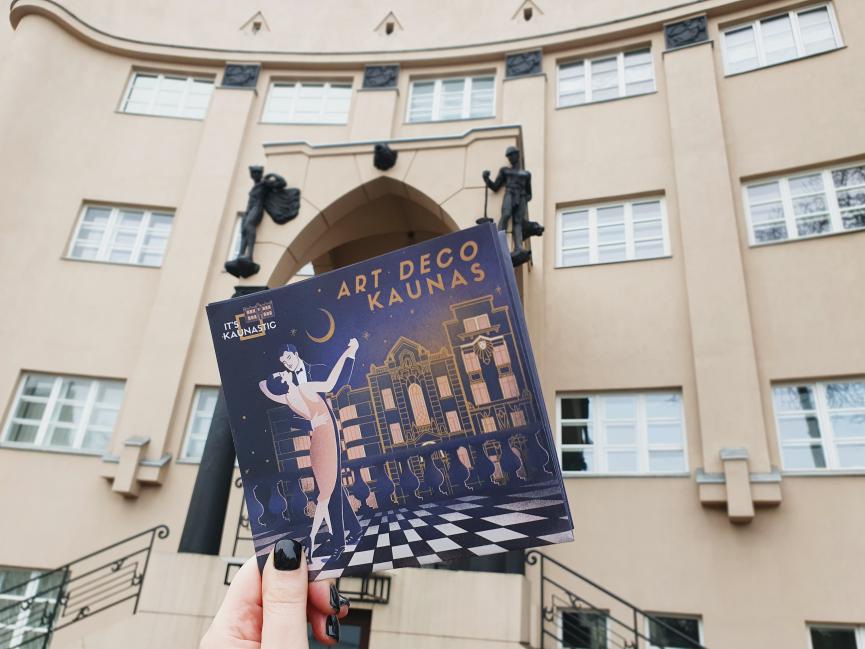 Why Art Deco? After all, we’ve already published The Modernist Guide for architecture lovers. It’s no secret that the most distinctive feature of Kaunas in terms of architecture is modernism. In 2015, Kaunas’ interwar modernist architecture was awarded the European Heritage Label, and the city became a member of the UNESCO Design Cities network. It was also that year that the first exhibition, “Art Deco in Kaunas 1919-1940. A sense of home”, was organised! Since then, our city has often been presented in the Lithuanian and foreign media through this lens.

Art Deco is not the only, but a crucial and visually appealing trend that shaped interwar Kaunas, a temporary capital striving for Westernness. The new route invites you to explore how much of this decorative trace can be seen in Kaunas’ modernist heritage.

The Amsterdam School Museum offers experiential tours from 18 January onwards, and registration is already open. We suggest you start your kaunastic art deco explorations from here. And what does a visit to Vytauto pr. 58 promise? 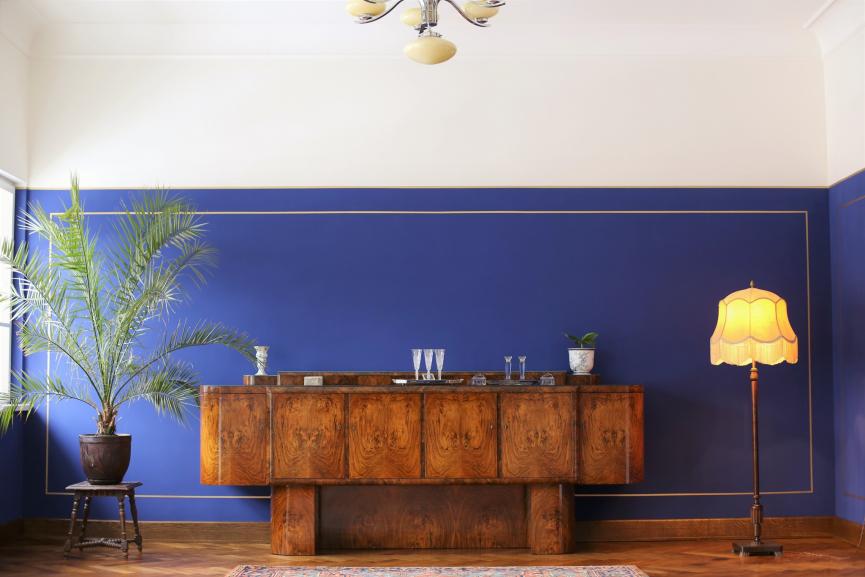 First of all, as the museum founders Karolis Banys and Petras Gaidamavičius state, This is the only building in Lithuania representing the Amsterdam School architectural style, which borrows Art Deco and Art Nouveau elements. For the project, the owners of the textile factory Liteksas, Moses Posvianskis and Giršas Klisas, employed architect Jokūbas Peras. The house was the home of many prominent citizens of interwar Kaunas. Its façade is characterised by remarkable plasticity, curve angle, segmented windows and sculptures. It was recently restored, as well as the main door and windows of the staircase, and the latter was given back its bluish-golden hues. 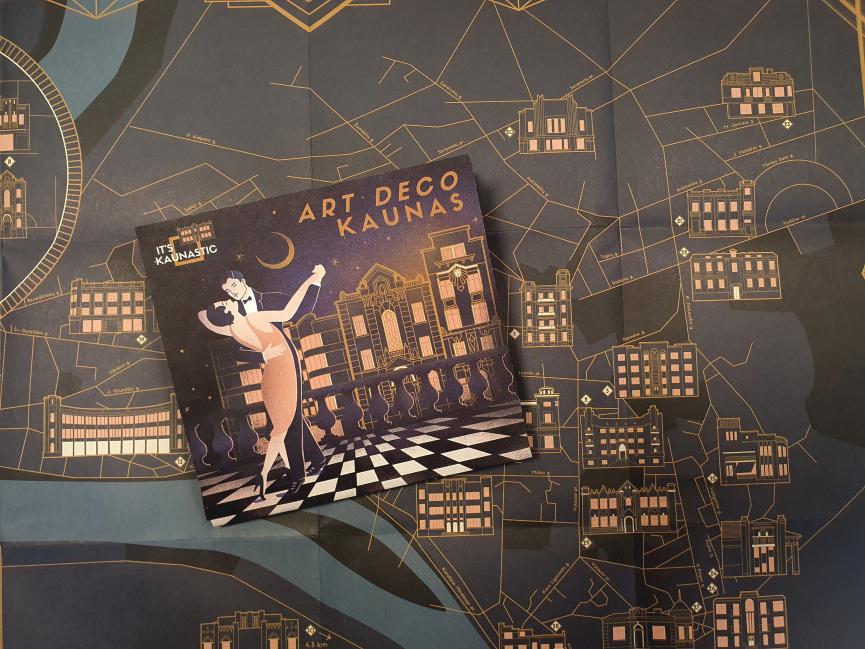 The new museum is in apartment No. 6. The 136 sqm, 5-room apartment has 2 balconies and a terrace facing the slopes of Žaliakalnis. Queer theory is used to help explain the very colourful and bright palette of the room walls and the mannered sculptures decorating the building. The Jewish culture of Kaunas, interrupted by the Holocaust, is an integral part of the story. The museum’s experiential tours present sustainable solutions for recreating the interiors, which can be compared with images from the apartment’s previous eras and even footage from the HBO series Chernobyl. The condo features Art Deco and Amsterdam School-style furniture.

“Art Deco Kaunas” invites you to discover the features of the historical style not only in the buildings of the city centre but also in Žaliakalis. You can come inside some of the objects marked on the route to admire the interiors, furniture and various other objects. Be sure to take a stroll in Žemuosy Šančiai, where there is an exceptional modernist synagogue, and discover the villas in the former resort of Panemunė. If you’re observant, you can undoubtedly prolong this route on your own. There are many more expressive art deco signs in the city, hidden in the facades and interiors of historic buildings. 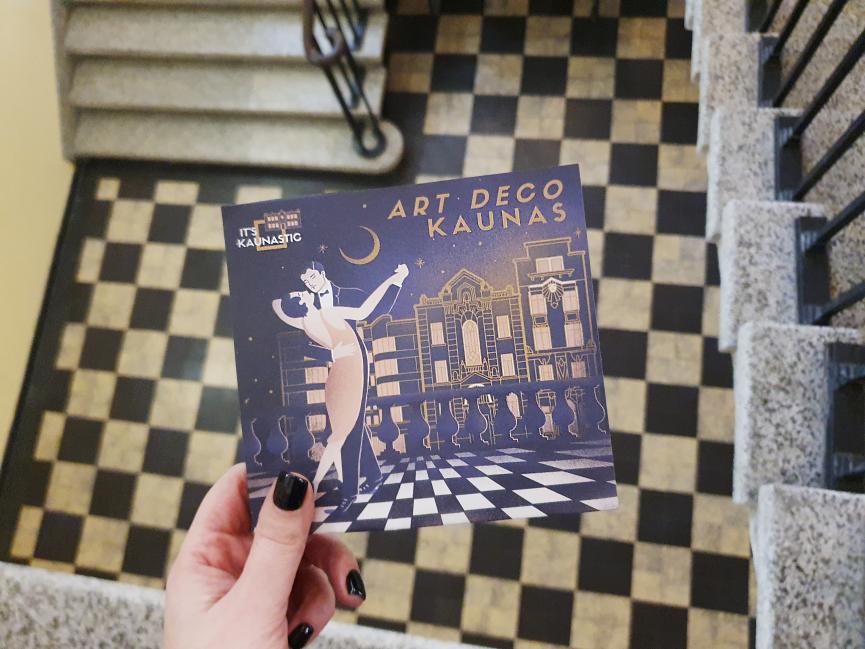 We are grateful to Jolita Kančienė, an architect and expert on the architecture of interwar Kaunas, for her help compiling this route and revealing the unheard stories of the buildings. Our other important source was the “Kaunas 1918-2016. An Architectural Guide” by LAPAS publishing house.

“Art Deco Kaunas” is the newest release of the series of dozens of illustrated itineraries in Lithuanian and foreign languages. The most recent It’s Kaunastic publications include discoveries of industrial heritage, wooden architecture, interwar Kaunas student life, and the city’s Ukrainian highlights. The free maps are available at the Kaunas IN Tourist Information Centre, Laisvės al. 36, and digital copies at visit.kaunas.lt or kaunastika.lt.