The masterminds behind 'Blue Orange' have just opened a second location on Gedimino - it's also a very kaunastic spot. 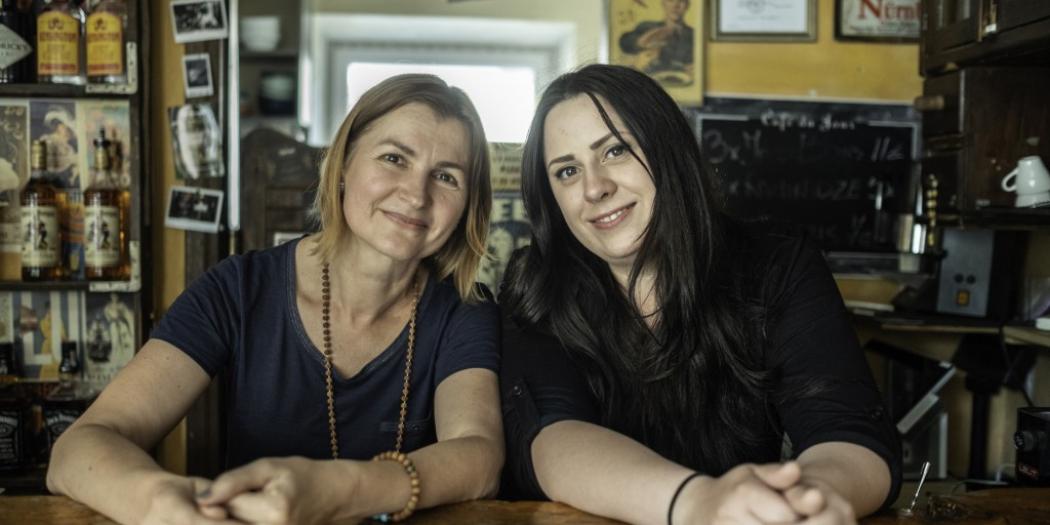 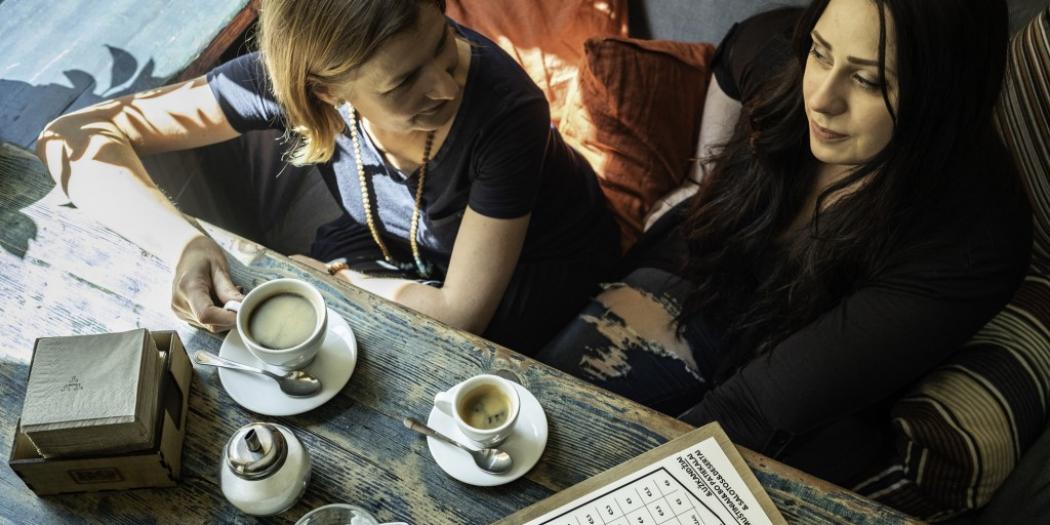 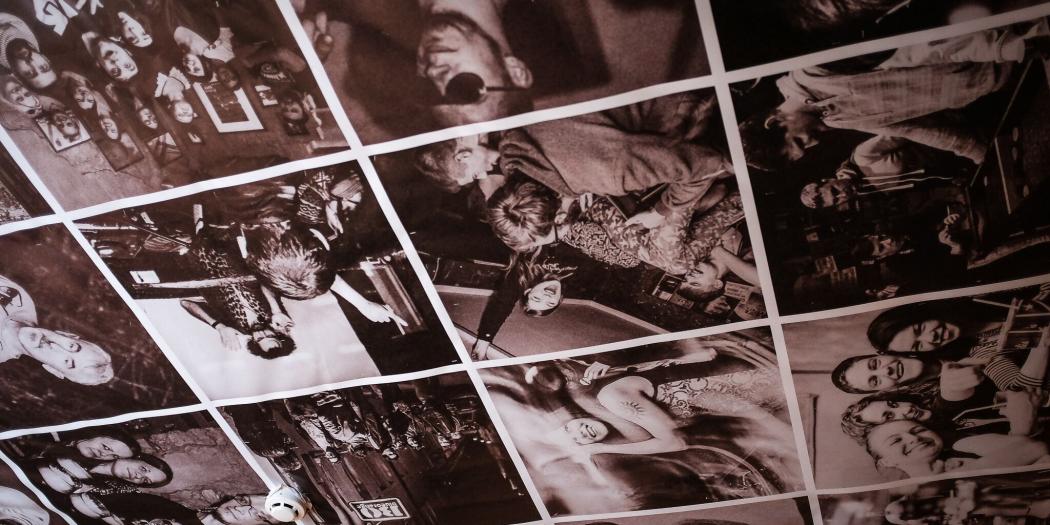 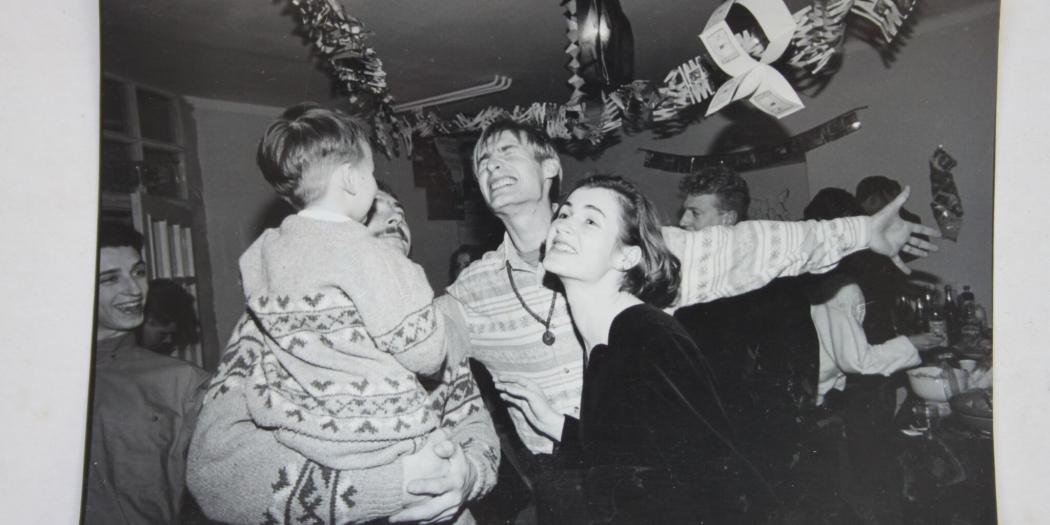 Blue Orange (or BO) bar located on Muitinės Street has entered its mid-twenties. It is the bar that gave birth to and educated entire generations of bar visitors. The bar’s director Virgita Kuprėniene and its manager Vaida Diliūte told us all about BO community’s features, it’s historical moments and why it was - and continues to be - frequented by beautiful people. 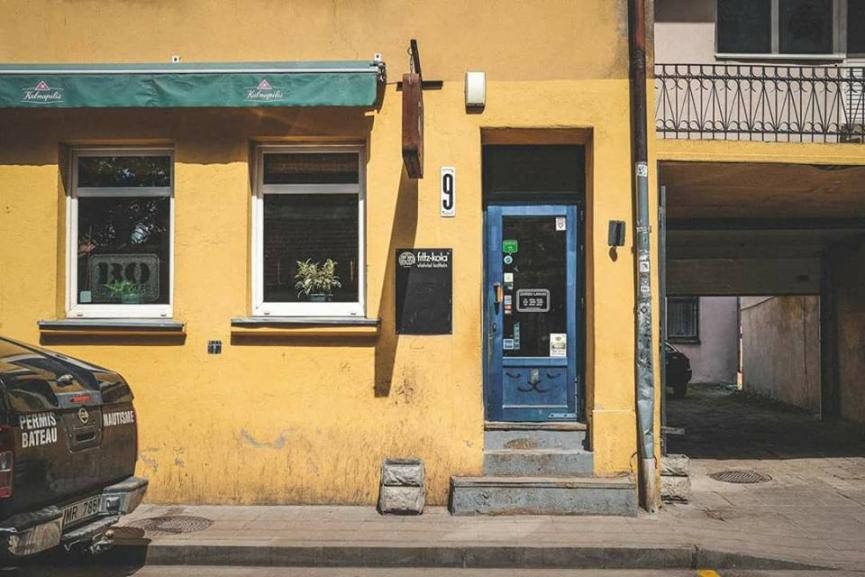 THIS is the place! Photo from the archives of BO 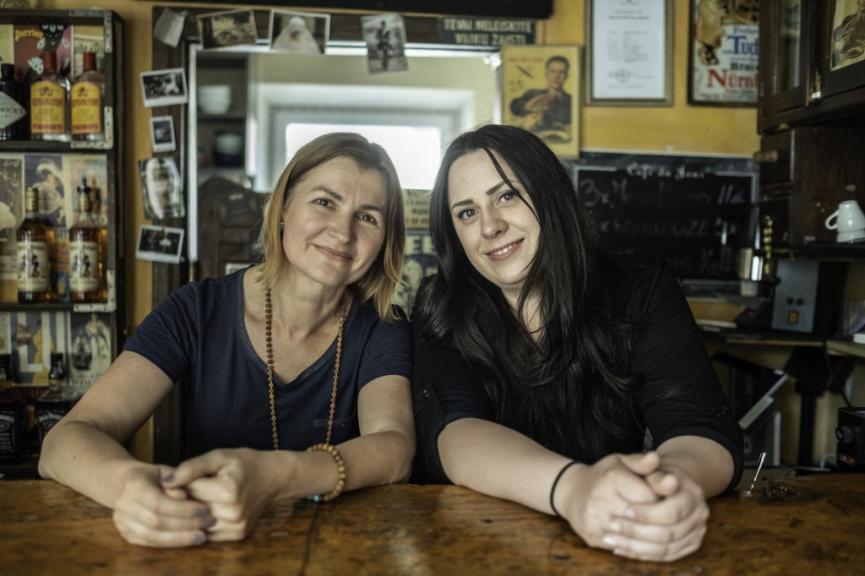 Virgita to the left - Vaida to the right!

Let’s go back to the beginning. Blue Orange has been running for 23 years already, right?

V. K. We, as a company, are a year older, because we were established in 1994. Since we renovated it by ourselves - painted, demolished, brought all kinds of things from home - the opening of the bar itself happened only on May 5, 1995.

It all began with the wish to open a different bar. Not a typical Kaunas bar: we didn’t want it to be fancy, but a democratic place that would be friendly and close to people; the one which you can visit without make-up or dress up (at the time it was like a slap in the face). The principal founders of the bar are probably Deivis and Claudia Mačiuliai: my brother and his wife. When they began developing this idea, Deividas was the practical one, and Claudia was the moving spirit - it was she who came up with the bar’s name. Claudia loved the surrealist poet Paul Éluard, and she took the name from one of his verses, “The world is like a blue orange.” We’ve heard a variety of hilarious versions guessing the origin of the name, but I can assure you it doesn’t stand for the Blue Oyster as one of the rumours suggest.

Do you have regular visitors that frequent BO since its opening day?

V. K. I don’t think we have people who would be sitting here every day or week for 20 years, but some do return for specific occasions. They come with families, children, and there are also a few kids of the frequent visitors that now work behind our bar.

How did bars of Kaunas look like when you opened yours? Where you alone in your genre?

V. K. There were a few similar bars: a discotheque-like Telis bar, Antis, Skliautai and Kregždutė beloved by students.


How did your audience change over the years, how does it look like now?

V. D. On the other hand, we noticed that more and more visitors of the older generation are interested in the bar. It’s interesting that the old bohemians can relate well to the modern hipster youth. 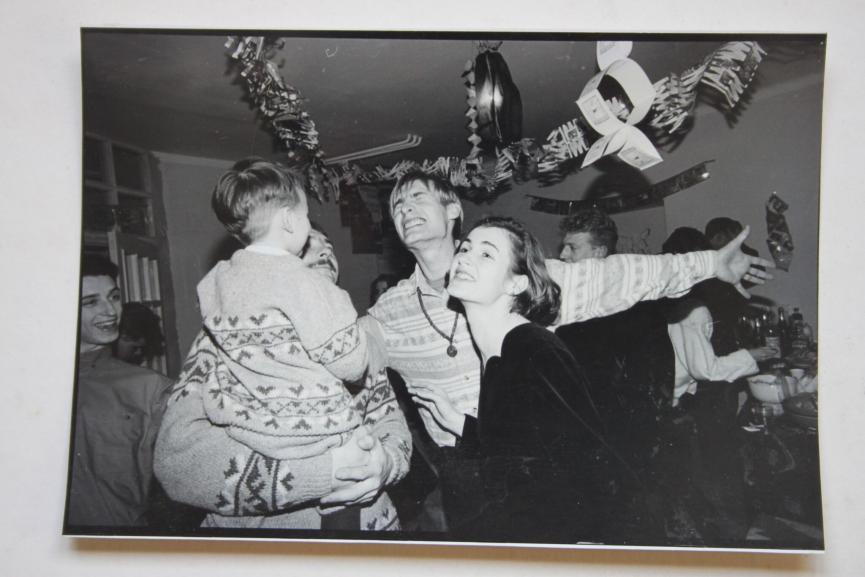 A very happy New Year a couple of decades ago. Photo from the archives of BO

Tell us, what events that took place in this bar in those few decades you find the most fun, silly or beautiful?

V. K. There were so many of them. After remembering them, I am not sure if they’re funny, but they sure are typical of us. One of the founders and old-timers of the bar, Ramūnas, told a story about a neighbours’ guest who upon arriving at the party closed up the entrance of the bar with his car. And BO visitors have a specific sense of justice, and if necessary are able to join forces for a common goal quickly and thus, all the BO’s guests got outside, lifted the car and moved it with their hands into the middle of the street. Soon, there was a traffic jam, drivers got angry, started beeping - many people were dissatisfied. So, the owner of the car, with the help of BO’s visitors was taught a severe public lesson.

V. D. I don’t remember why, but once the bar guests wrapped a security car with a plastic wrap and tied it to a street pole. A very nice and meaningful act.

V. K. Once, one visitor spent a long time in the toilet. Finally, he came out all wrapped in a toilet paper - mummified. He looked impressive.

V. D. One evening, the bar was full of people. Someone started playing the guitar in one of the halls. Then, another person in a different hall pulled out a pipe and slowly a music band was assembled. The people in the bar got into a circle and started to dance. It all started spontaneously and grew into a good family feast.

V. K. I remember, once in the morning we came to work and found the whole bar decorated with crayons. Apparently, some older artist (cannot remember his surname) felt inspired and started drawing - on the walls and the ground.

Do you tolerate such bouts of self-expression?

V. K. Yes, as long as it doesn’t harm the guests, employees or equipment. That time it was a pity to destroy the drawing, but we needed to mop the floor.

V. D. The artist comes to this day. He brings paint, a canvas and paints our visitors. 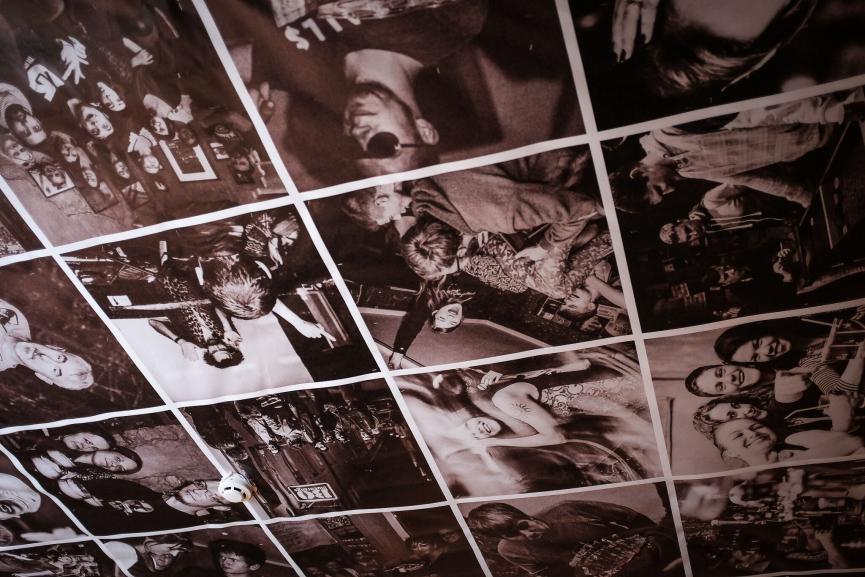 Way too many kaunastic stories in this one. Photo from the archives of BO

Do you hold personal celebrations in BO?

Yes, always! We love to celebrate birthdays and all sorts of other occasions.

Have you ever brought your mom here?

V. D. My grandma was doing shots at the bar.

You have recently opened a new BO bar. Compare them.

V. K. Never thought that we’d become a chain, but - never say never. The bars are similar in their atmosphere, which is artistic, democratic and open. We opened it for the “grown” BO fans. We felt that sometimes people want to chat calmly, have some coffee or even bring their mom over but the first BO lacks that chamber feel, it’s a much wilder place. It appears that by opening the second BO we made many people happy, so I guess, we have hit it right.

Are you considering the possibility of a third, fourth or fifth bar?

V. K. Three is a beautiful number! Somehow that third bar pops up in discussions. Recently, when we were sitting at the second BO with my brother, one old BO visitor came up to us. He gave us a coin (Litas) that was given to him by a grandma and told us, “Thank you so much for the second BO. When after many years of living abroad I returned to Kaunas and visited the first bar, I felt a bit too old for it, so I was sent over here. This coin is for your third BO so that I can visit it when I return the next time.” 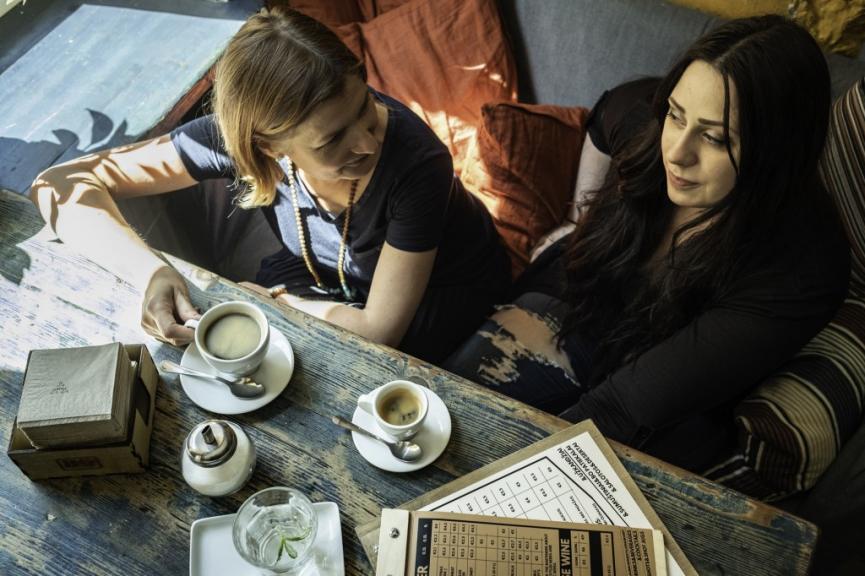 Then we’ll be waiting for the third bar! And what are you planning on doing in the first BO?

The word “planning” is hard to use now because the whole building is being sold.

V. K. Everyone reacts in this way. We were shocked too after learning about it. It doesn’t necessarily mean that we will move, because the new owner may be interested in maintaining the bar. I’ll tell you a joke. Once, on the April Fools’ Day, we announced that we’re opening a BO bar in Vilnius. After that, we received such a huge number of CVs and various offers that if we really were to open a bar, it would have been a wonderful bar with an amazing team in the capital. Hence, no matter where we’ll be, we will continue to thrive and attract beautiful people.

BO is located on Muitinės g. 9 and B2O on Gedimino g. 30. You simply must try the fried pickles if you visit the latter!