Building a modern city with a special attention to its past

When the city’s spacetime becomes an inspiration and the solutions are dictated by a house in the old town with a truly rich history.

Vaiva Mažonė, the founder of Bōheme House says that during the first year of construction, she immersed herself in readings about the bohemian life and salon culture of interwar period Kaunas, and she was astounded by what she learned. “Kaunas was much more than the so-called Little Paris in 1920-1940,” the architect and the owner of the hotel says. 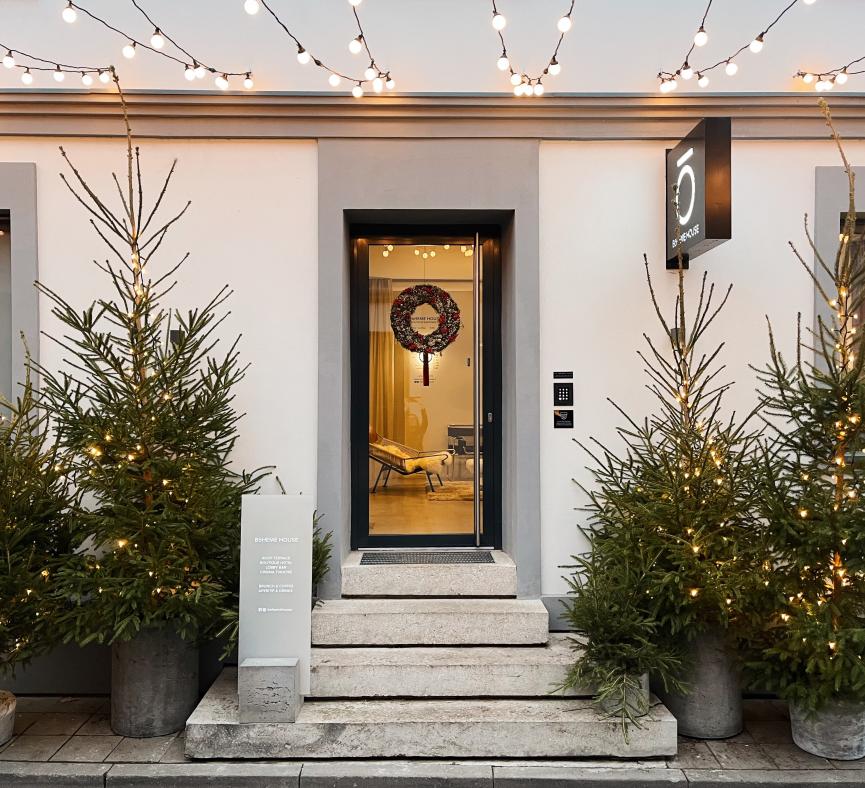 Architectural design usually begins with the historical or urban context of the surrounding environment. Thus, the interwar period building that houses Bōheme House prompted the architect to take a closer look at what was happening in the temporary capital a century ago.

“I tried to look at it not only from an architectural but also from a cultural point of view, more broadly. In the interwar period, after studies and internships in Western Europe, bohemians returned to Lithuania full of energy and ideas. Therefore, we tried to refine the most intriguing stories and give them an architectural form. That is how eight differently themed rooms – of architecture, scenography, perfumery, ballet, photography, painting, poetry and music - came about,” Vaiva says, calling this idea her “maternity leave project.” The abandoned building, purchased just before the birth of her daughter, was to be carefully reconstructed, but at the time, there was no thought of building a hotel or a restaurant. 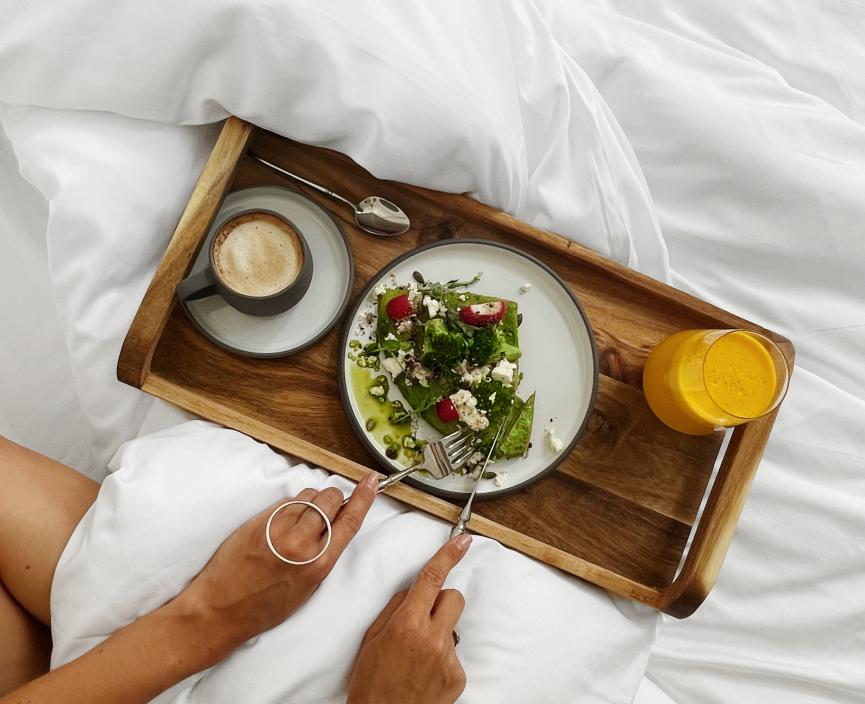 Gradually, the project grew organically, and the market itself - people, who miss unique spaces and healthy food in Kaunas - inspired her to offer a unique product: a house that accommodates different and inspiring spaces that motivate people to spend their time meaningfully.

Most ideas were dictated by a newly rediscovered interwar period Kaunas. “Philanthropists and artists worked here. At the time, people were already drinking coffee with almond milk and restaurants offered food deliveries and yet the sewage system in the city was introduced only in 1924. I was most impressed by the interwar period feature of combining old traditions with innovations coming from Western cultures. With this project, we aim for the same by creating synergy between old, cosy objects and modern technologies that enrich the guest’s stay. We didn’t want to imitate the interwar period; we didn’t hang old paintings on the walls and did not furnish the rooms with Art Deco furniture. We sought to refine the core values, the way of life of that time and give it a modern look. We don’t believe in imitation. We believe in building a modern city with special attention to its past,” the creator of the project says.

Entering the scenographer’s room, the guests will be greeted by the spirit of Liudas Truikys’ home and the Far East atmosphere. Instead of the usual chairs, a Persian rug, and a cup of hot matcha tea will invite you to sit down. The architect room’s eclectic shapes in the white background will remind you of the legendary white villa and the soloist’s room will amaze you with a private live piano concert right there in your room. In the bathroom, you will be able to try out a bar of soap created according to the Kipras Petrauskas’ soap formula.

Some of the innovative ideas in the hotel were inspired by the spaces and the desire to live sustainably, for example, by adapting the same space to different activities at different times of the day. The hotel’s laundry, for example, ended up in an amphitheatre-like basement that was also wonderfully suited for a cinema. So, towels are washed here in the mornings and in the evenings, guests gather for private screenings at the cinema or for cosy celebrations and tastings with friends. 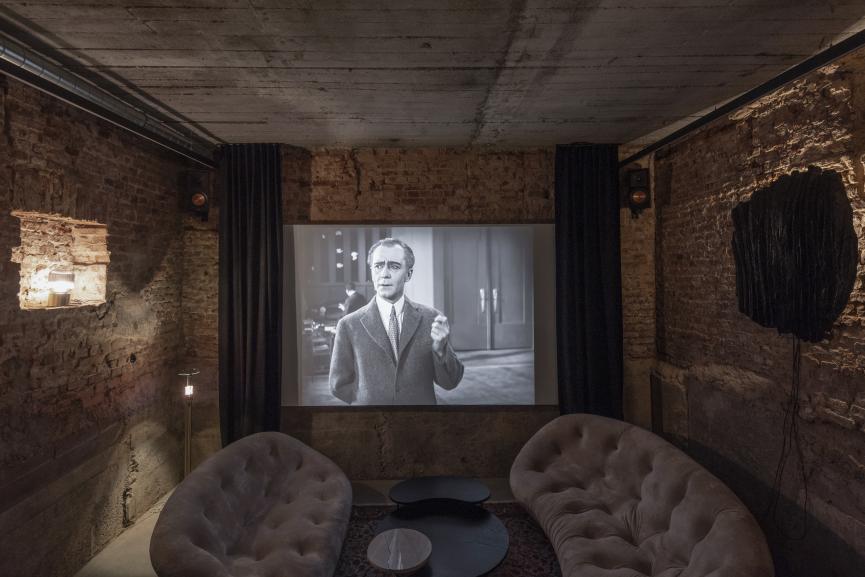 “On the other hand, what is innovative here in Lithuania, is already commonplace and part of everyday life abroad. For example, the roof terraces that can be found everywhere in Zurich, Venice, Vienna, and other cities’ old towns. Our rooftop terrace invites you to get to know the city from above. It offers a cosy panorama of Kaunas while you’re sipping on your morning coffee or relaxing after work in the evening,” the owner of the hotel describes her ideas. 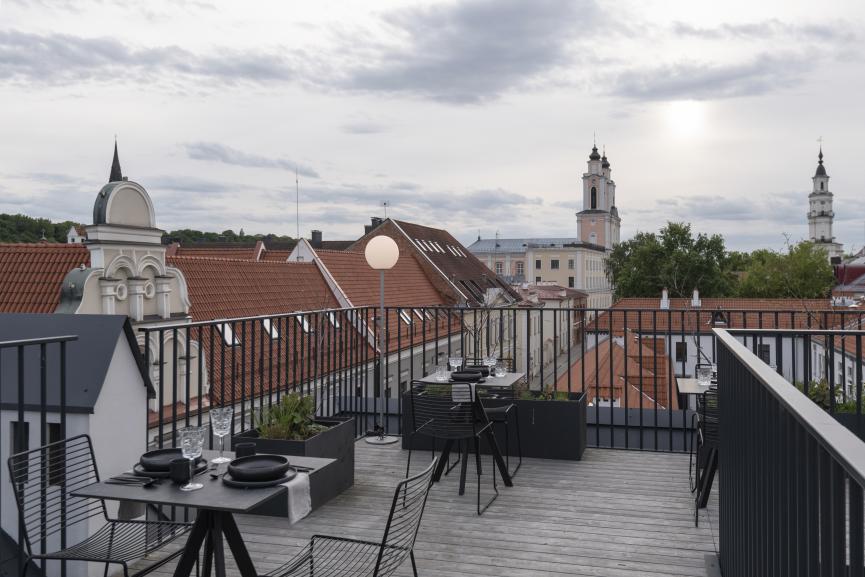 In addition, sustainable ideas motivate one to turn to partnerships will local businesses and creators. The hotel’s hallways are decorated with Lithuanian artists’ works, which guests can purchase. The hotel beds have the highest quality mattresses by Lithuanian manufacturers and the restaurant will soon serve products from Lithuanian farms. “After all, we eat here too, so we set really high standards for the restaurant’s dishes. In addition, we wanted to escape from the traditional hotel breakfast buffet, so we created a nutritious and seasonal menu,” V. Mažonė says.

When asked what were the biggest challenges that this ambitious project faced, Vaiva responds that the old building and its unusual spaces surprised her several times. The process was also slowed down by the pandemic, thus much more energy, time and effort than initially expected was put into the project. However, the result and rich new experiences that gave so much to the architect as well as the hotel, made it all worthwhile.

“I believe that Bōheme House will become the new Konradas Cafe bringing together authentic personalities for new acquaintances and quality time together under one roof,” the Kaunas resident adds with a smile on her face.