Conquering the Hill Forts in Kaunas and Around

The ancient artefacts are popular sightseeing spots as they usually reveal stunning panoramas. So, put on your climbing shoes and see you on the hill in Kaunas or Kaunas district! 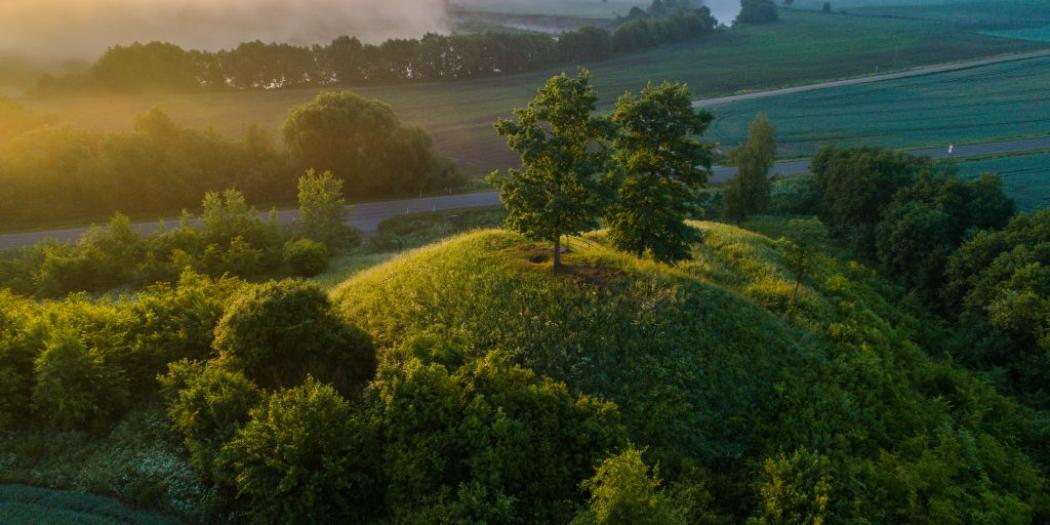 Hill forts are some of the most interesting and beautiful archaeological monuments in Lithuania. Their total number approaches one thousand, which is more than in neighbouring countries. In ancient times, hill forts were used as a refuge or defended settlement, located to exploit a rise in elevation for defensive advantage.

Lithuania has hill forts dating from the Bronze Age in the 1st millennium BC. Most of these forts were expanded between the fifth and fifteenth centuries when they were used in the Dukes’ Wars, and against the invasion of Teutonic Knights from the west. Most forts were located on the banks of a river or a confluence where two rivers met. These fortifications were typically wooden, although some had additional stone or brick walls. The hill was usually sculpted for defensive purposes, with the top flattened and the natural slopes made steeper for defence. Nowadays, no castles are left standing, but the hill forts are popular sightseeing spots as they usually reveal stunning panoramas. So, put on your climbing shoes and see you on the hill in Kaunas or Kaunas district!

The Vieškūnai Hill Fort, also known as the Amaliai Hill Fort or Šuneliškės Hill Fort, located in Palemonas, was discovered only in 1992. Probably because it wasn’t known about for a long time, this is one of the best-preserved hill forts in Lithuania and dates back to the second half of the 14th century. The hill fort provides magnificent views all year round, including a panorama taking in the reservoir, sandy slopes and the pearl of Lithuanian Baroque, the Pažaislis Monastery. In this remote place, you can relax and listen to the singing of birds. Perhaps not surprisingly, nearby is Lakštingalų (nightingale) Valley. In 1937, the poet Salomėja Nėris settled close to the valley, and today you can visit her memorial museum. On the other side of the valley is the Kaunas Yacht Club. 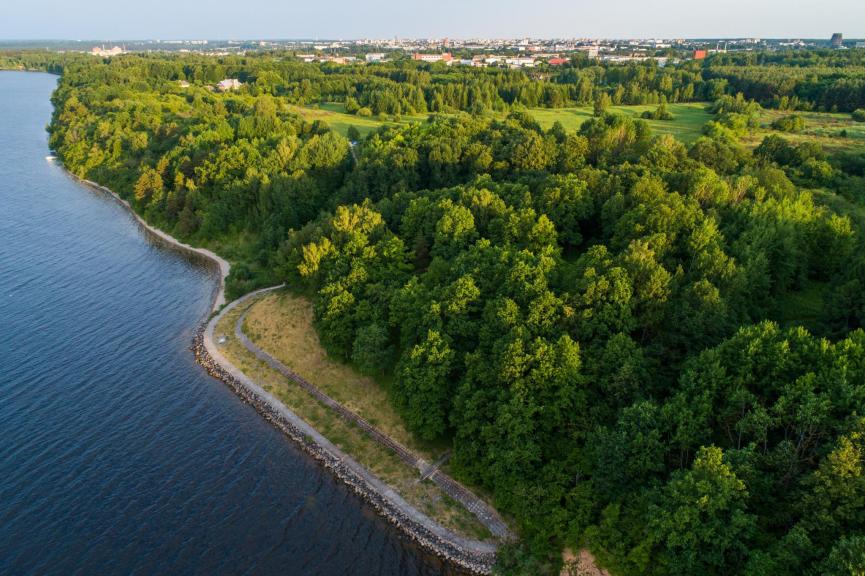 In Aukštieji Šančiai, not far from the centre of Kaunas, is a hill fort known as both Šančiai Hill fort and Aukštapilis. The Aukštieji Šančiai oakwood that covers the hill fort and that’s located on the upper terrace of the right bank of the Nemunas, is a smaller remaining part of an oak forest that once surrounded the city. You can find the hill fort when driving from K. Baršausko Street before you reach the cemetery. Like many other hill forts in Kaunas and Lithuania, there are many legends concerning this one. One says the hill is haunted. Someone here has even seen white horses.

Members of the ancient religious community Romuva, the so-called Romuvians, established a sanctuary next to the hill fort. In 2013, a fire altar was built on a platform next to it. Here, people celebrate Baltic holidays and perform different rituals. If you were to go deep into the oakwood, you’d find an oak tree marked by the god of thunder, Perkūnas. The members of the Romuva community formed a paleoastronomic calendar around it, a circle made of stone that’s 14 metres in diameter and made of 12 different sections. 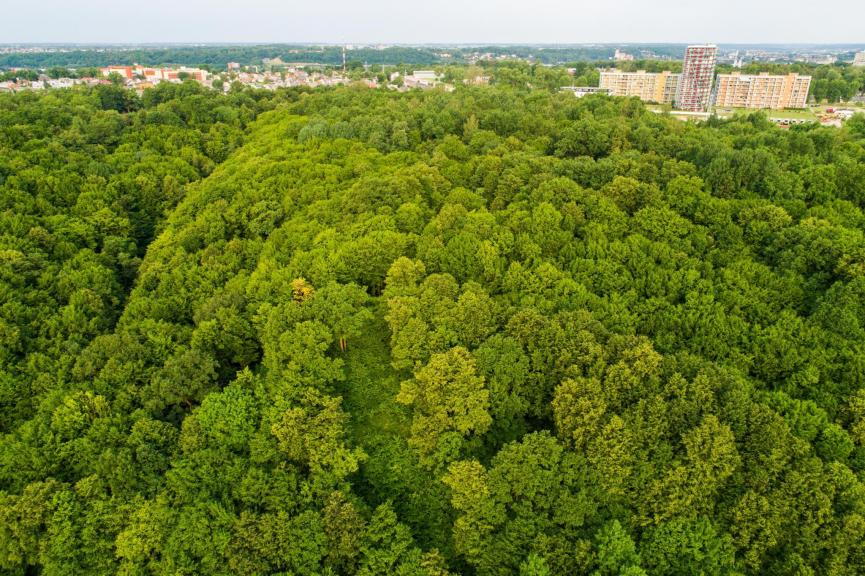 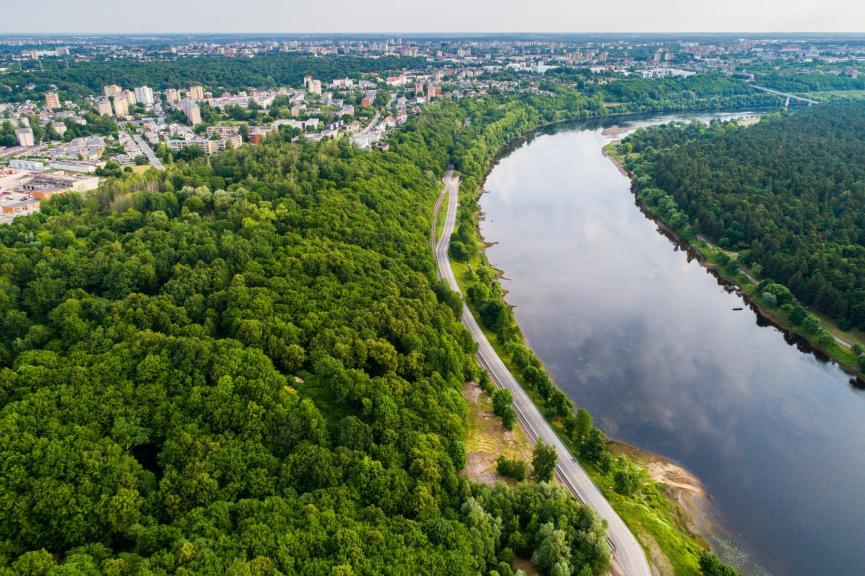 Photos by Unseen Pictures / Kaunas IN

The Jiesia or Pajiesys Hill Fort, also known as Napoleon’s Hill, is located on the left bank of the Nemunas at the confluence of the Jiesia and Nemunas close to Piliakalnio Street, between Panemunė and the railway bridges. The steep hill fort, overgrown with broad-leaved trees is a natural hill standing 63.6 metres high. During the autumn, winter and spring, when the trees don’t have so many leaves, a panorama of Kaunas opens up.

It’s believed that in June 1812, Emperor Napoleon watched the French Army crossing the Nemunas for three days and three nights from this hill, which is how it got its other name. In the memories of his contemporaries, it’s stated that on the eve of the crossing, the commander arrived here and put on the frock-coat and hat of a colonel. After exploring the area, Napoleon ordered that cannons, the fire of which were used to cover the troops crossing the river, be brought to the hill fort. However, this wasn’t needed as the army didn’t face any resistance. 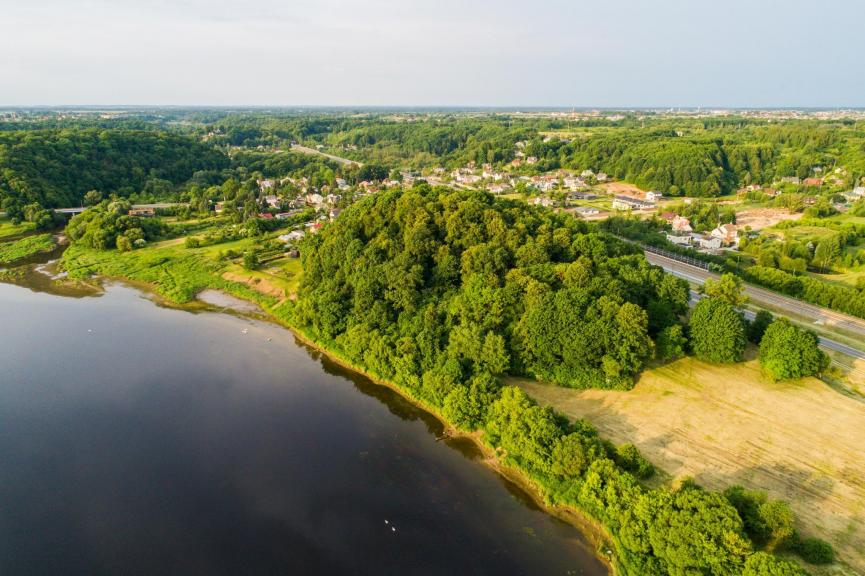 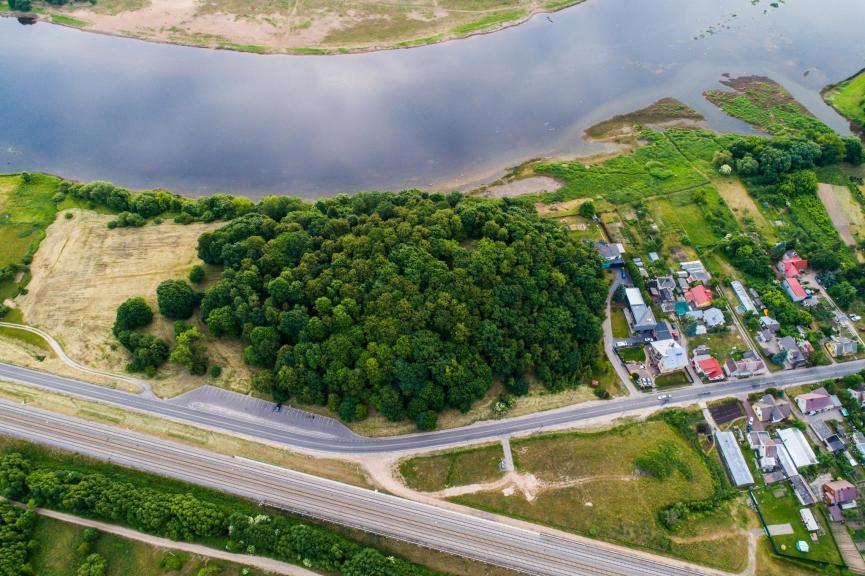 Photos by Unseen Pictures / Kaunas IN

The Veršvai Hill Fort, or Lampėdžiai Hill Fort, located In Vilijampolė on the cape of the hill chain of the right bank of the Nemunas, dates back the 14th century. According to archaeologists, a wooden castle stood here at the time and was destroyed during the battles against the German Crusaders. Thus, this hill fort is an important site in regards to the creation of the Lithuanian state.

The people of Veršvai make many contributions to the management and popularisation of the hill fort. Community celebrations, national and traditional Baltic festivals, where people from Kaunas and the guests of the city are always invited, are organised at the location. 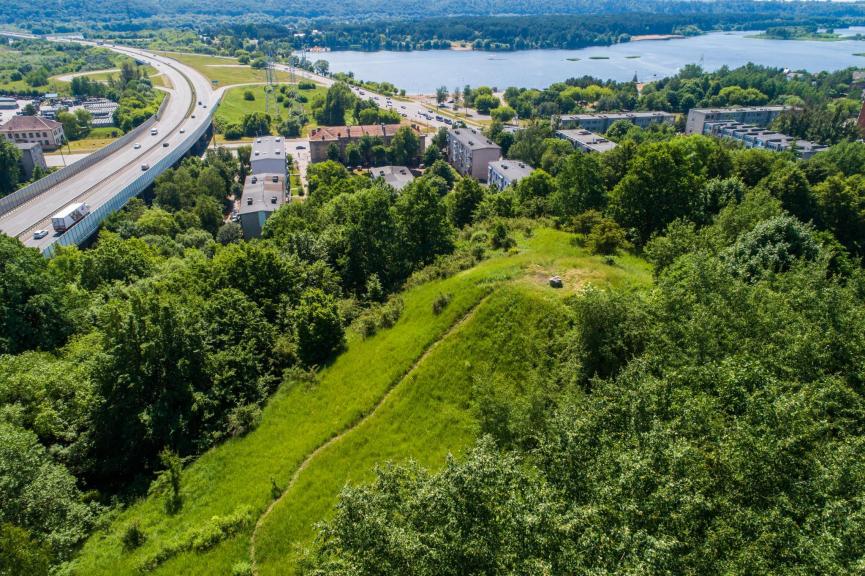 In 1379, the chronicles of Wigand of Marburg state that a marshal of the Teutonic Order, Gottfried of Linden, who was attacking Lithuania, descended from Neris to Eiguliai. This is the first mention of this place’s name. Today, Eiguliai is a residential district of Kaunas. The area’s history from the 14th century can be found in the form of a hill fort that hides here. It’s believed that the castle of Eiguliai (Egollen) stood on this hill fort and was burnt by the German Crusaders on June 30, 1382. There are those who believe that the rebuilt Vytautas Eiguliai castle was where Vytautas 1390 defeated Skirgaila. 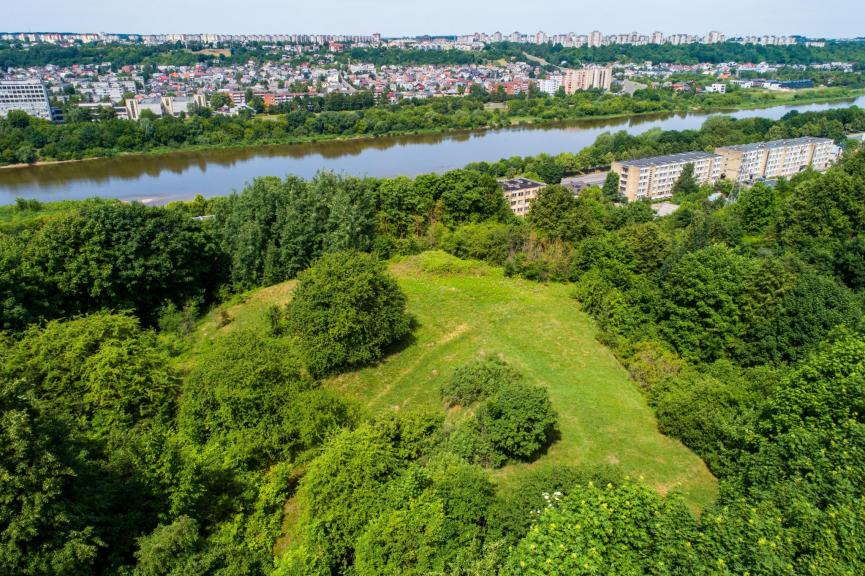 The Piepaliai Hill Fort is on the cape of the upper terrace of the right bank of the Nevėžis river. You’ll find this hill fort, which is also known as Babtynas, Babcinas and Žemaitkiemis, on your way to the Babtynas-Žemaitkiemis Manor, famous for its cultural events and located northeast of Piepaliai village.

Legend has it that the Swedes poured the hill fort with their hats. Some variations of similar stories, however, mention the period of Napoleon’s reign. Another legend is about two brothers who found treasure here, but who argued who should get the horses to take the treasure. One brother said angrily: To hell with them, and the whole chest went down the Nevėžis river together with all the treasure. 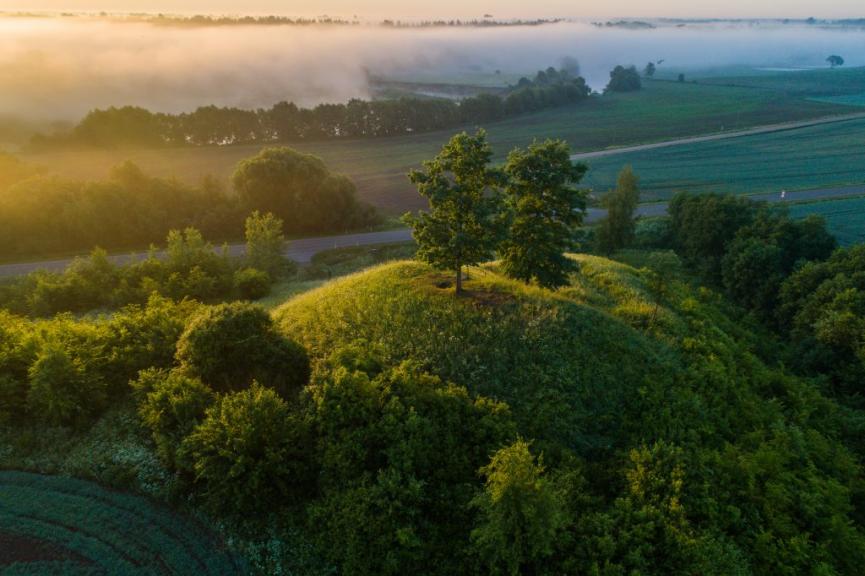 Whilst travelling from Kaunas to Jurbarkas, about 5km from Vilkija, it’s possible to visit the Ringovė Hill Fort, which is sometimes called Pilikė or the Humorous Hill. This is an archaeological monument from the early period of feudalism.

There are several legends about the Ringovė Hill Fort. For example, it’s said that a long time ago, a priest fell into the Šventupis creek close to the hill fort along with his carriage. It’s true however that the creek was given this name only after this incident, and its water is said to be consumed as medicine. It’s also reported that around 1364 an attempt was made to build a big wooden castle, Ringė, which was one of the links in the Nemunas defensive line. 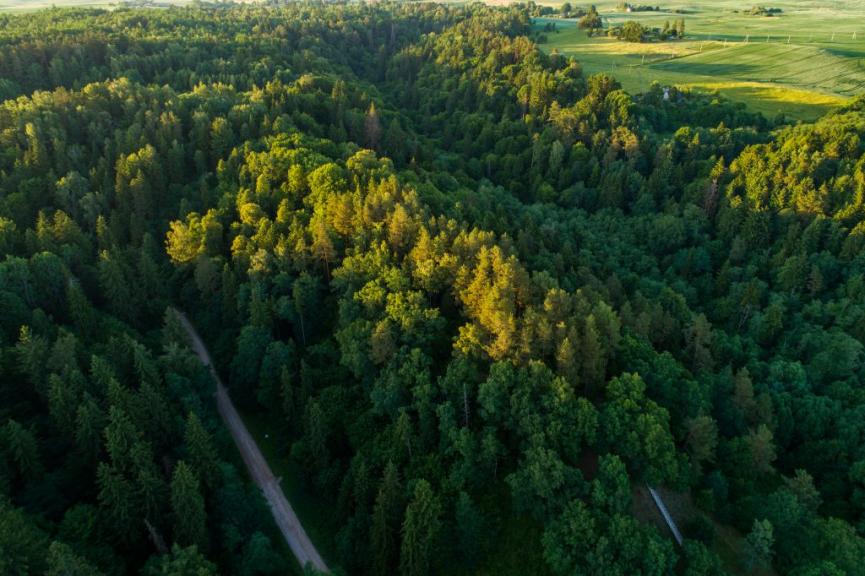