Andrius Aleksandravičius takes pictures of Kaunas every day, and we love them all. Time to ask him some questions! 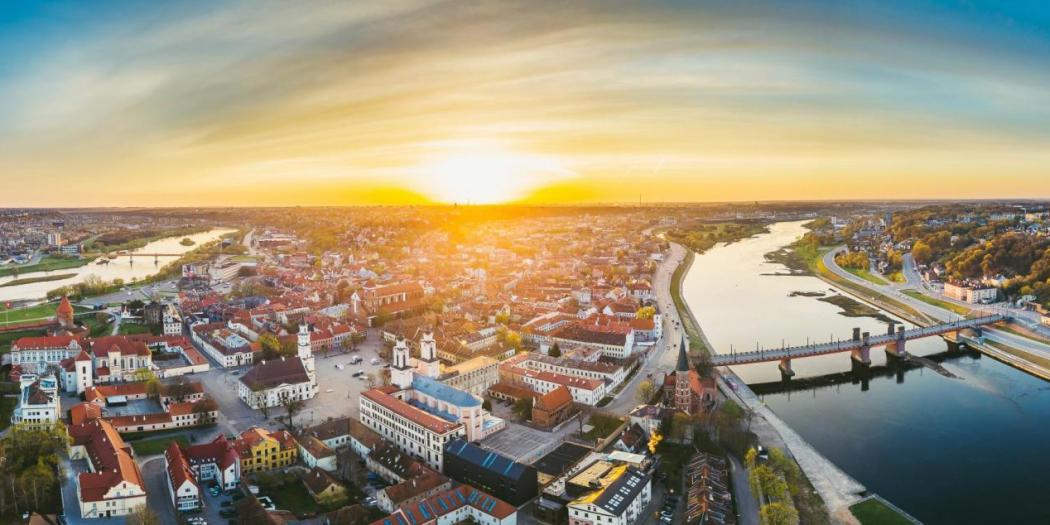 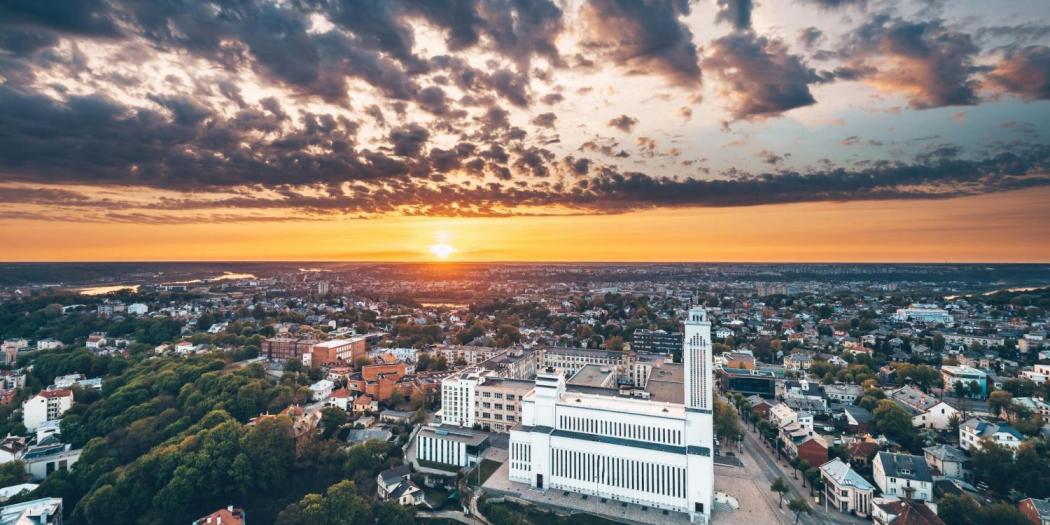 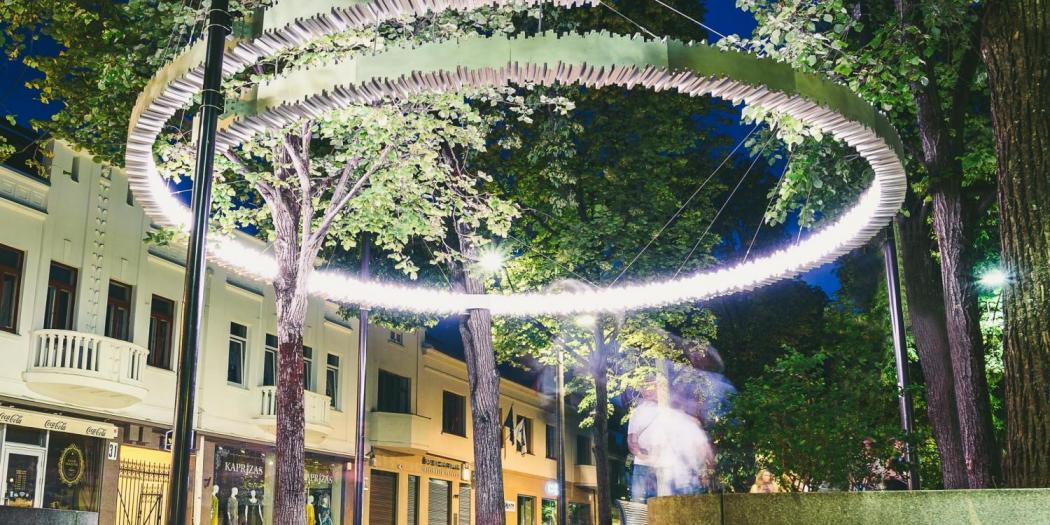 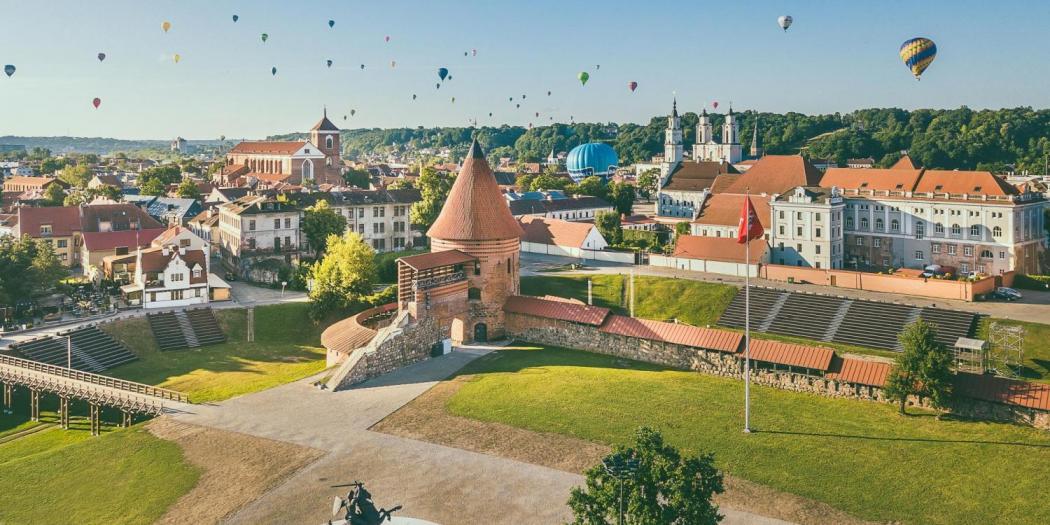 Early morning and late at night, in the summertime and at Christmas. Empty and packed. Andrius Aleksandravičius has been capturing the different faces of Kaunas for 12 years now. We’ve shared dozens of pictures by Andrius on our Facebook page and Instagram profile; his snapshots have also made it to publications about Kaunas distributed abroad. It’s about time we sit down with Andrius and ask him some questions. 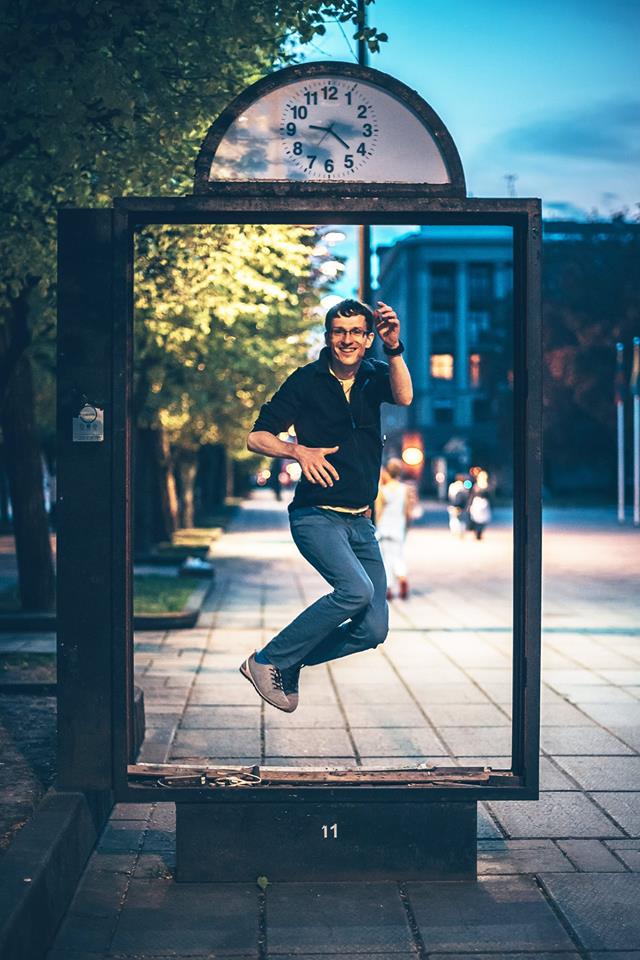 Sometimes, the frame is so right the photographer steps in himself. Like in this picture. Hi Andrius!

What were your first pictures all about and what inspired them?

I think it was around 2005 or 2006 when the first mobile phone with a camera appeared in our house. The quality of phone pictures was terrible, so I decided to explore other options. I didn’t feel any affection towards analogue photography – I wanted results, and I wanted them as soon as possible. So, I convinced my family to buy a digital camera. They were quite expensive back then. I got one and started shooting – cats, flower, sunsets and cityscapes… Quite soon I left my hometown Panevėžys for Kaunas, where I became a student. That’s when I really learned a lot. Better cameras, more practice and more will to improve.

Portraits, nature, urban life – do you prefer any of these topics?

I don’t really have a single topic that would be “mine”. It’s true that I never try to “direct” a photo. This is precisely why I have worked as a press photographer and really enjoyed reporting the busy city life. After some time, though, I realised it’s all very cyclical – major holidays, weather, accidents etc.

It was an invaluable experience to work on location, quickly edit the pictures and publish them. Nevertheless, after some time, I decided to go independent and set myself free from websites, editors and reoccurring events.

I’m a freelancer now. I mostly shoot the city and events, I travel a lot, and I work with international agencies. 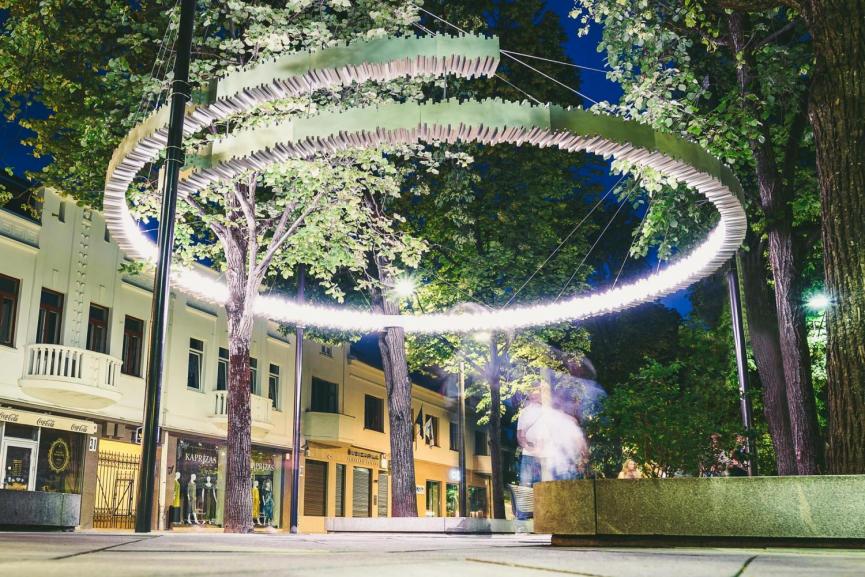 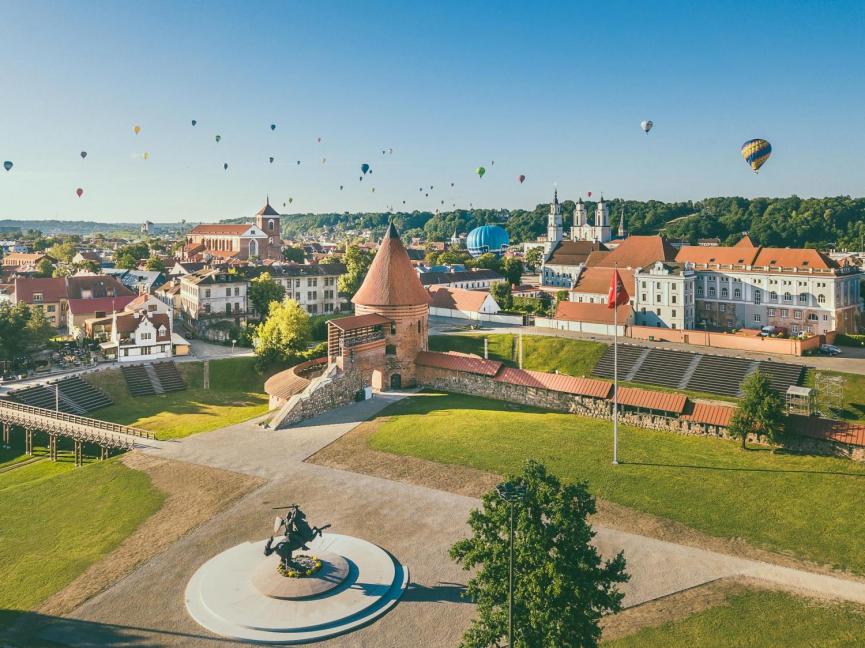 Andrius follows the cultural life in Kaunas and captures every important detail. In June, he welcomed the memorial for Jan Zwartendijk; in July, he observed the brand new Warrior of Freedom statue from above.

Have you ever tried to count the number of different pictures you shot in Kaunas?

That would be very hard to do. The first one was done in 2006, so it must be a lot of them. I do have a project called 365 – to publish at least a picture a day – that has been going on for 9 years now. Most of the photos on there are from Kaunas. I update my virtual gallery every day, and it’s usually more than one picture. I love that social networks, especially Instagram, lets me show the views of my city to the whole world. I do hope at least one tourist chose Kaunas because of my photos.

Of course, offline publications are what makes me very happy, too. I’m particularly glad we work with Kaunas IN, and my pictures are visible abroad.

What’s the most beautiful angle of Kaunas for you?

Kaunas is the most beautiful when viewed from the confluence of the Nemunas and Neris rivers. It’s both the Old Town and the view of the connecting rivers that are stunning. The place is beautiful all year round. In spring, the pedestrian paths are flooded. In the summertime, it’s just perfectly green. In winter, it’s the most picturesque when ice covers the rivers – first Neris, and, if it’s freezing, then Nemunas. 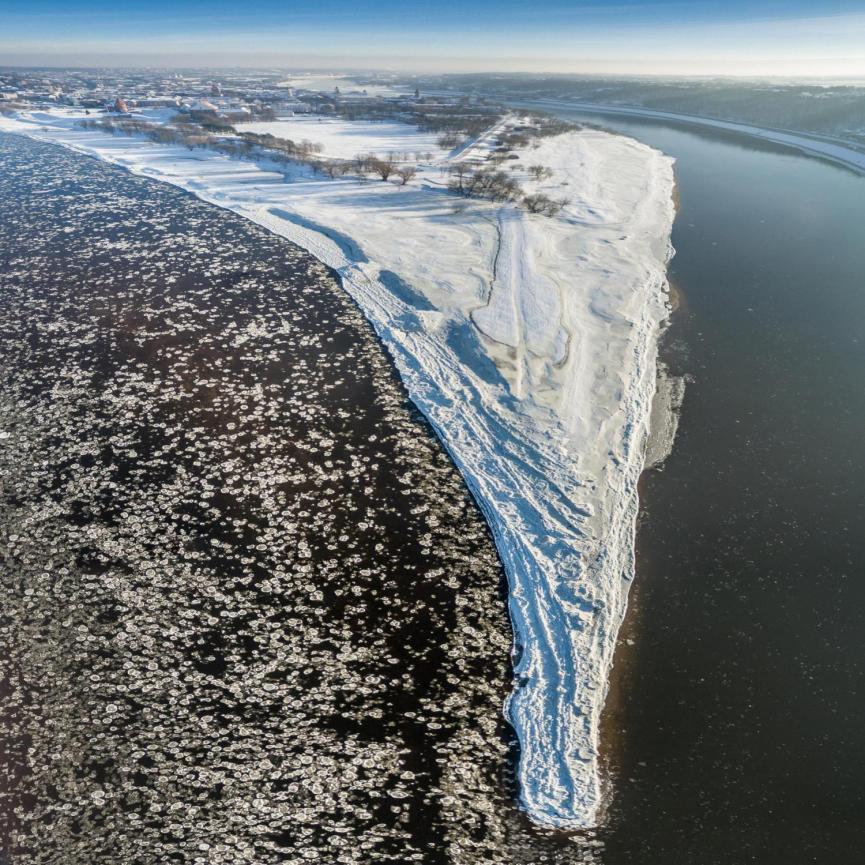 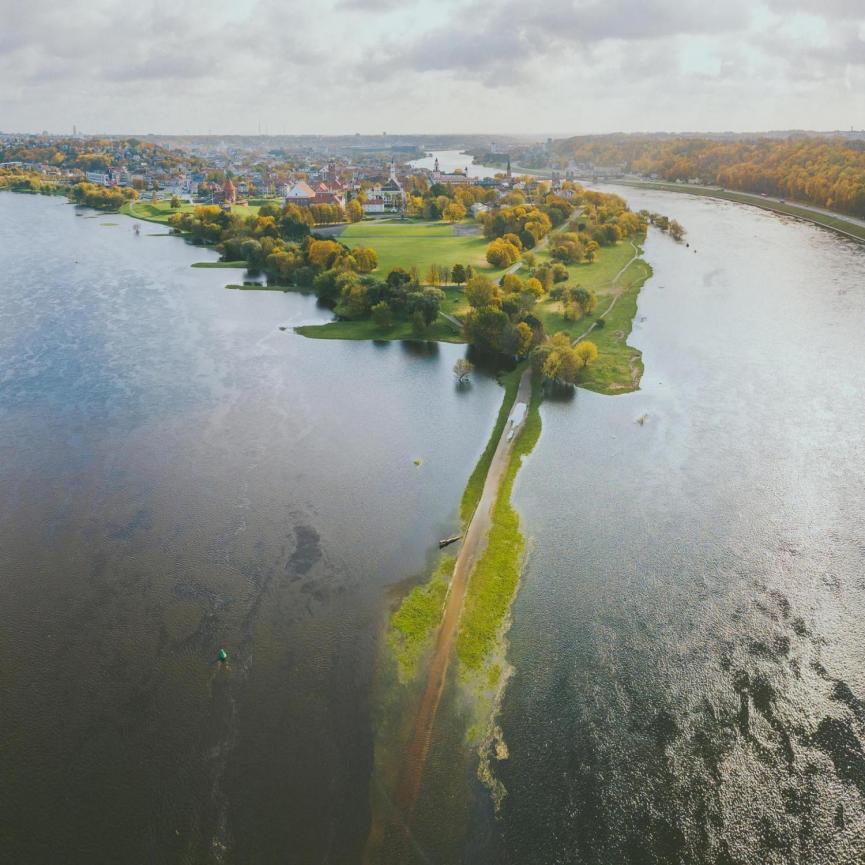 Pictures by A. Aleksandravičius

How often do you upgrade your gear? But maybe a mobile phone is enough for a perfect shot if it’s really perfect?

Of course, the best shot can be done with a phone. They’re great at taking pictures nowadays. It’s just that you need to be in the right place on the right time. You also have to be very lucky, because the best shots are often overseen due to lack of time. So, if you want best shots regularly, you have to have a setup that’s with you all of the time. I change mine every two years – that’s the camera and the drone. Of course, I’d love to do it more often. My dream done setup, for example, costs more than 10k Euro. I want better pictures of Kaunas, really! Here’s what’s inside my bag today:

You belong to the drone subculture. Do you also take pictures from flying objects – hot air balloons, maybe? Where’s the catch of photos from above?

Well, people have wanted to fly since forever. It is an expensive thing to do, no matter how you look at it. A plane, a hot air balloon or anything else that flies is almost never cheap. I wanted to fly, too. My first aerial pictures were taken from a plane on my way to holidays, I ten tried a hot air balloon and an ultralight aircraft. And then drones happened.

I have been using a drone for 3 years now. The first flights weren’t too cosy but, with time, I plan more thoroughly – and I do check the weather forecasts.

One of the main perks of a drone is that it fits in a backpack, which means it’s always with me. This allows me to always be able to take the picture I can’t take from the ground.

Aerial pictures still surprise me. The places I know quite well look very differently from above. I think that’s the catch you asked about. 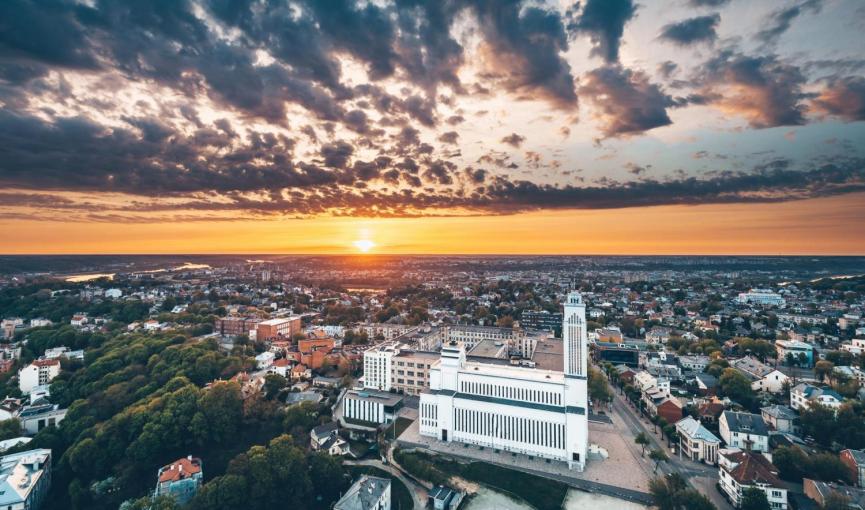 Pictures by A. Aleksandravičius

Of course, there are limitations – and they’re becoming stricter. You have to receive permissions for both the drone and the pilot when flying above cities. For many places, you need permission from the military and other institutions. It’s a pity that some rookies don't pay attention to the rules and put themselves – other people, too – into danger.

You've been keeping a visual diary of Kaunas for more than 10 years now. What do you think our city will look like in, say, 5 years?

It’s true that some of the pictures I did have already made history. Some of the new business centres weren’t here a year ago, it all changes very fast. I wish the ghost buildings would be demolished sooner.

In five years from now, Kaunas will no longer be the European Capital of Culture (the title is for 2022 – ed.). The slogan of Kaunas 2022 – “From Temporary to Contemporary” – will be fulfilled. There’ll be no borders between Kaunas and Kaunas region – just Kaunas.

I hope Kaunas will become a bicycle city. We do have a lot of bicycle paths, new ones are coming, but the network is quite messy at the moment. I also hope Kaunas will be the first city in Lithuania to get rid of nature-unfriendly cars in the centre. The rivers, I hope, will be full of boats and ships. They’re too empty now, but the city looks so good from the water!

What colleagues of yours would you recommend to follow for those who want more great sights of Kaunas?

Three panoramas in Kaynas you’d suggest for a visitor who only has one day in our city?

I’d suggest he or she starts with the main one on Aleksotas hill. Don't climb all the way to the top to see the broadest view from Akropolis mall to the confluence of Nemunas and Neris. Then it’s time to go to Žaliakalnis. Stop for a few moments when climbing up the stairs to Vytautas park – Soboras and the perspective of Laisvės alėja are visible through the leaves. An adrenaline-fueled perspective opens up for those who ride the “Orbita” rollercoaster at Vytautas park. After that, keep walking on Vaižganto street – you’ll end up at E. Fryko street and a splendid view of Kaunas railway station.