Iconic Places to Visit in Kaunas

Here are some of the all-time favourite objects of guests and residents of Kaunas. How many can you explore from Friday to Sunday? 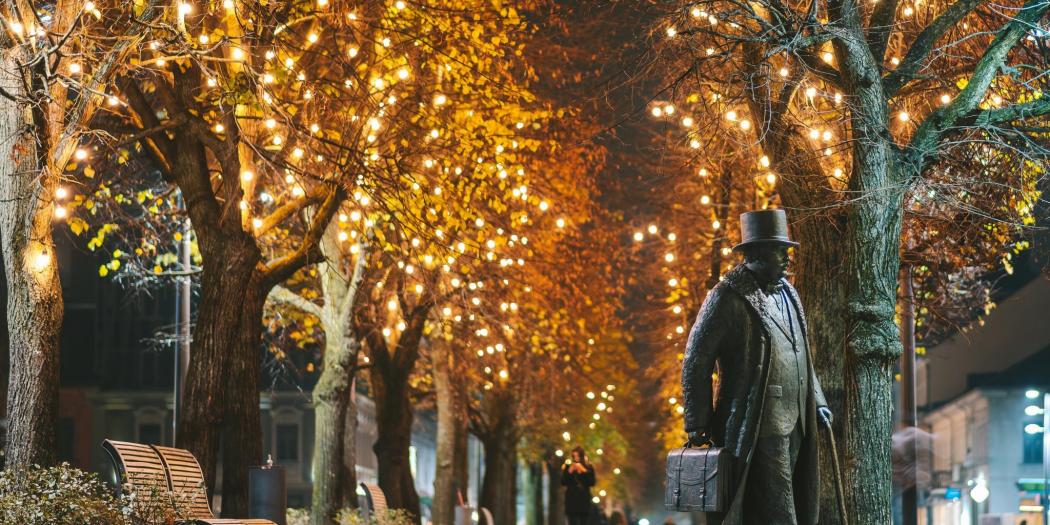 Are you planning a weekend getaway? Kaunas is a perfect choice for that. Due to its comfortable size and multilayered history, you can actually see a lot in just a couple of days.

The avenue might have lost the title of the longest pedestrian boulevard in Europe, but it’ll always be one of the oldest. Stretching between the St. Michael the Archangel’s Byzantine-style church often called Soboras, through numerous shops, cafes, restaurants, museums, galleries, public institutions to the Old Town of Kaunas, the street dates back to the 19th century. It was called many different names and received the principal name – “Freedom Avenue” – in 1919 and became completely car-less in the 1980s. The boulevard was recently renewed, as well as its iconic 80s-style fountain that actually plays music and spreads mist. It’s one of the most popular dating spots in Kaunas. 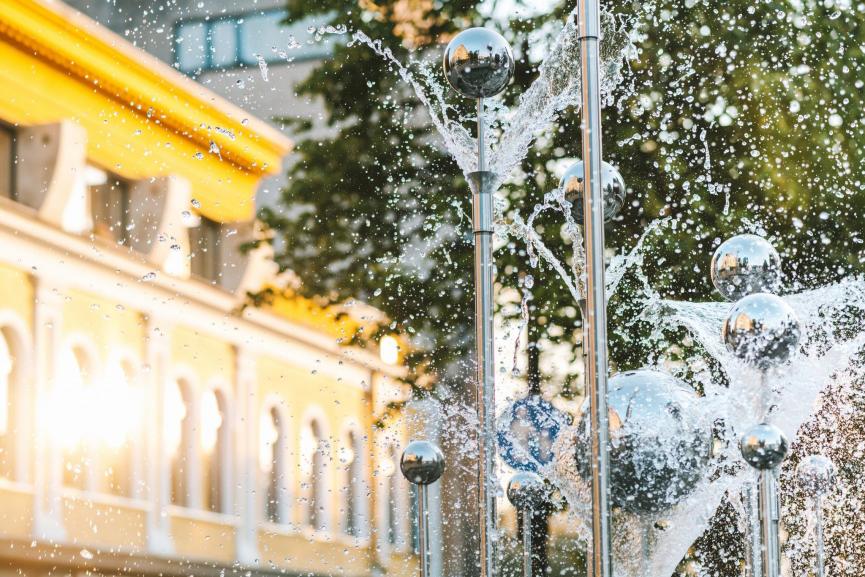 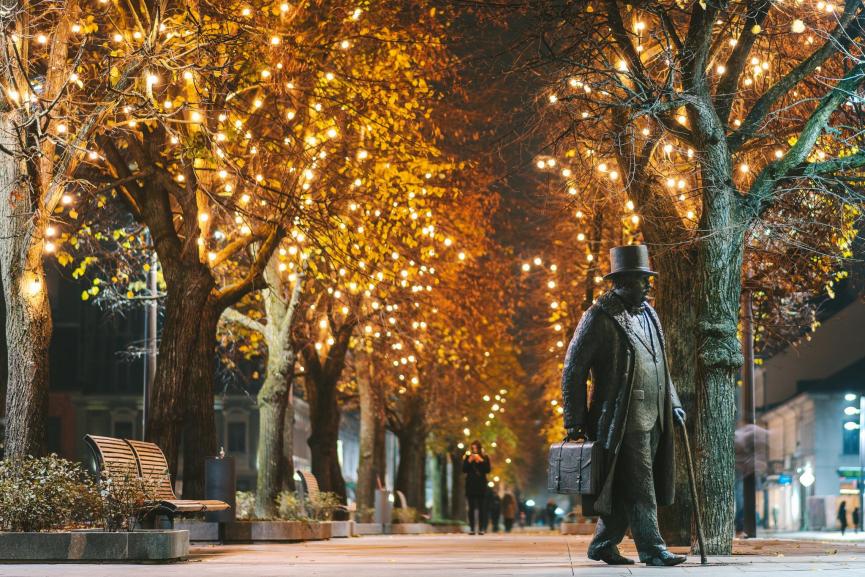 Crowning the extensive network of Kaunas modernism is this quite astonishingly beautiful building. An essential spot for those who have limited time in Kaunas and can only visit a small number of places. The annexe section covers the complex personality of Mikalojus Konstantinas Čiurlionis, the best known Lithuanian artist; the main building section is dedicated to a collection defining the beauty and elegance of Lithuanian art. The museum has a vast network of departments, mostly memorial houses and flats of notable Lithuanian artists, scatted all over downtown Kaunas and Žaliakalnis neighbourhood. 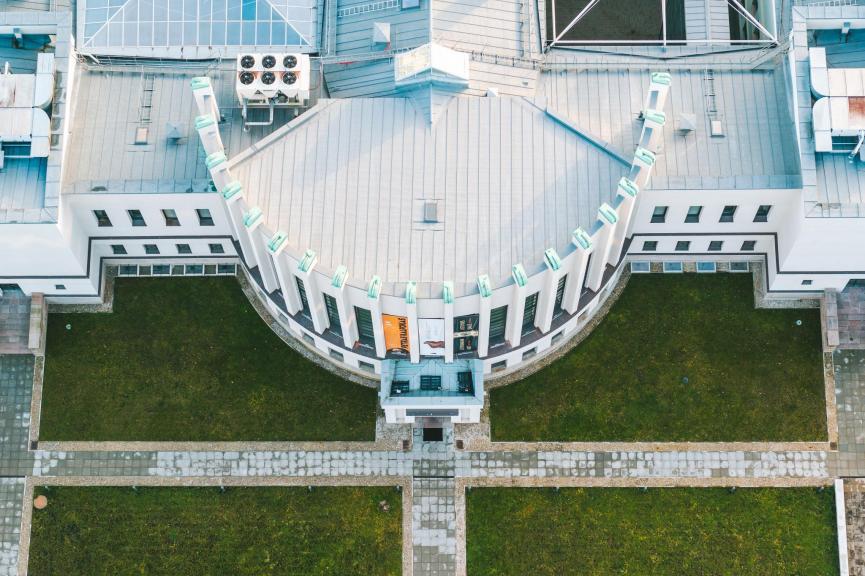 One of a kind, the devils’ museum sports a collection of over 3,000 devil creatures from all over the world. It was started by the painter Žmuidzinavičius, whose interwar house you can visit next door. We highly recommend that you book a guided tour of the museum, part of the National M. K. Čiurlionis Museum of Art network. 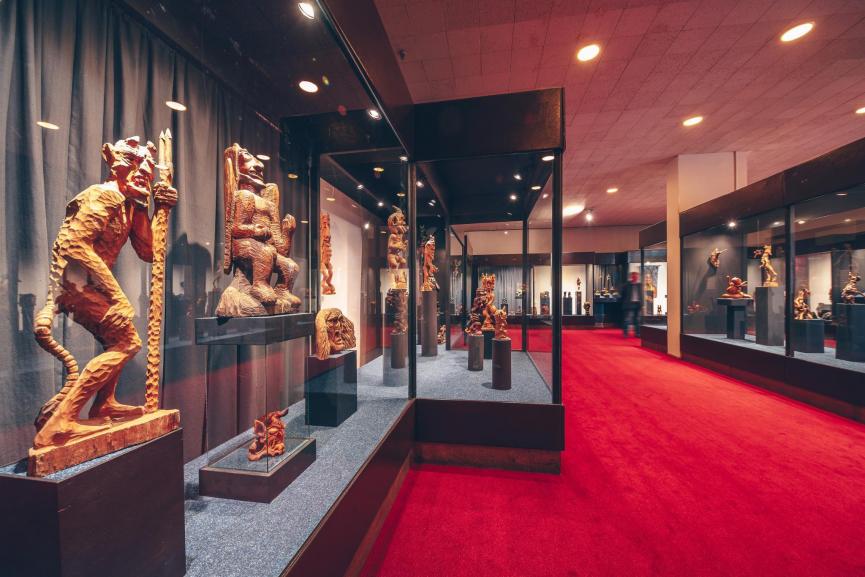 Welcome to the most-pictured panorama of Kaunas! Across the river Nemunas from the city centre, the hill itself is one of the best places to fall in love with the panoramic views of Kaunas, conveniently reachable by funicular, the vintage and very trendy means of transportation in Kaunas. Make sure to charge your camera. 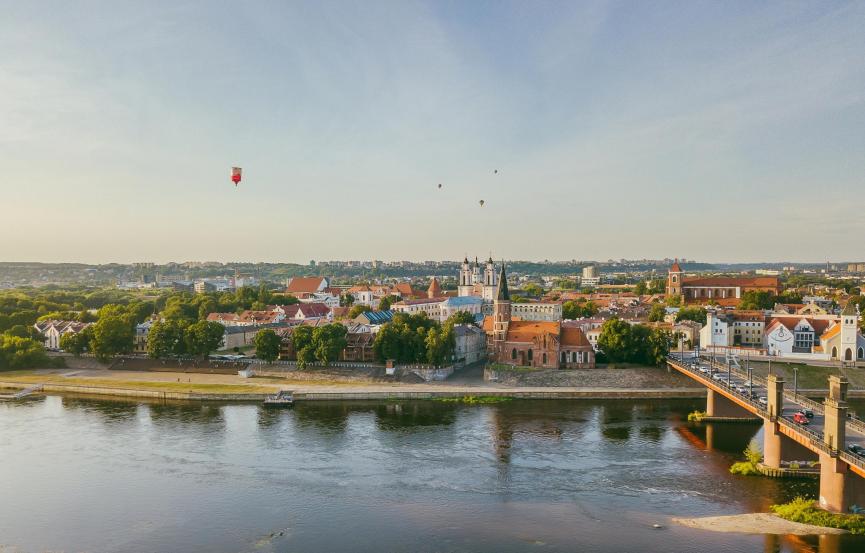 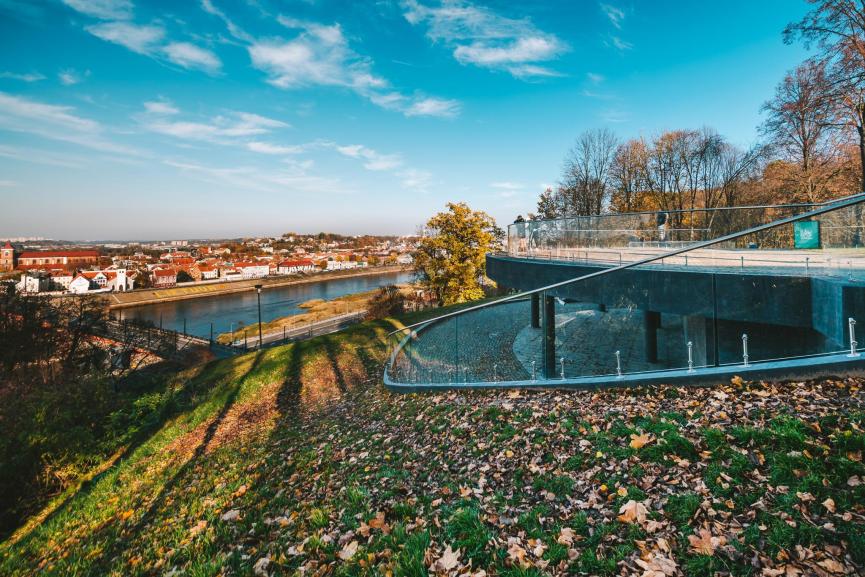 The church and monastery complex is one of the most mesmerising examples of late baroque in North-Eastern Europe, contributing to the history of Kaunas for over 350 years.

Now the location is among the most popular destinations of cultural and film tourism in Kaunas: pilgrims, artists, fans of series such as Catherine the Great and other visitors are welcome here, festivals take place in summer along with religious celebrations. The monastery is worth a day trip, and you’re welcome to stay in a hospitality complex located right here in the monastery if a day isn’t enough. Come hungry. 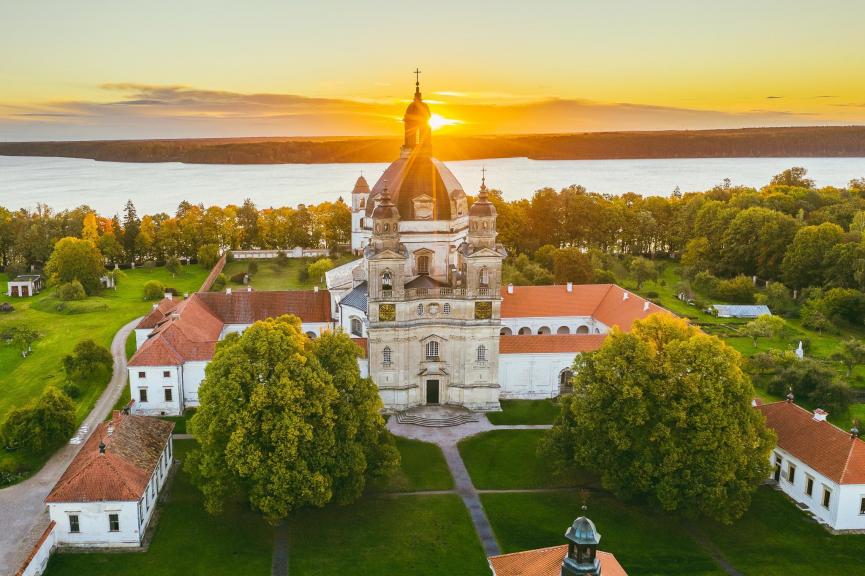 It’s a miracle that two funiculars – the symbols of the increasingly modern city in the interwar period – not only remained intact but are still used to this day. The picture-perfect Kaunas panorama from Aleksotas hill looks even more beautiful if you get up there with the recently refurbished yet authentic vehicle. The elder brother of Aleksotas funicular gets you up to Žaliakalnis – right in front of the monumental Christs’ Resurrection Basilica – in 1 minute and 38 seconds. You can take your bike with you for free! 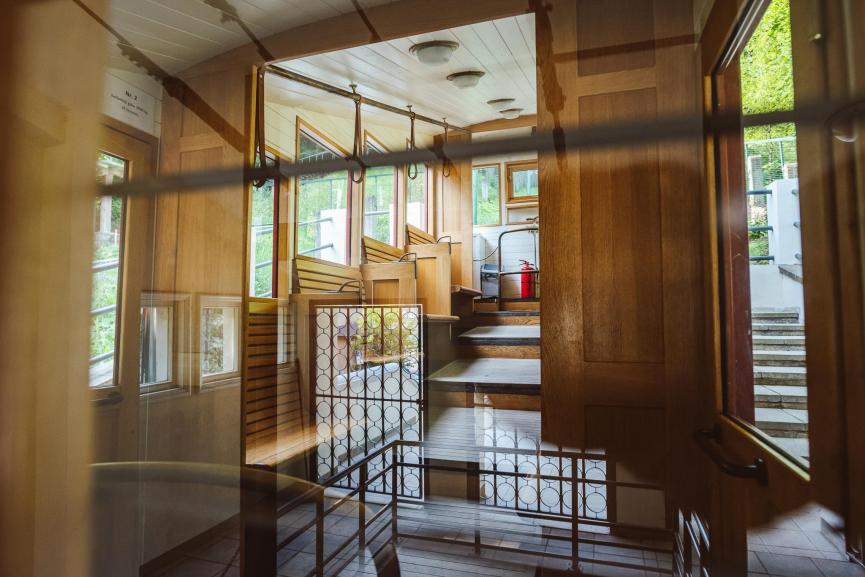 It’s the most significant example of a basilica of monumental architecture in the Baltic states (designed by a Latvian Karolis Reisonas), and it has the most extended history of building. Funded by people, the construction started in the 1930s and was only finished after we regained independence. In Soviet times, it was used as a radio parts factory. Christmas Eve is a great time to visit the church – and its upper terrace offers a spectacular 360-degree view of Kaunas every day of the year. 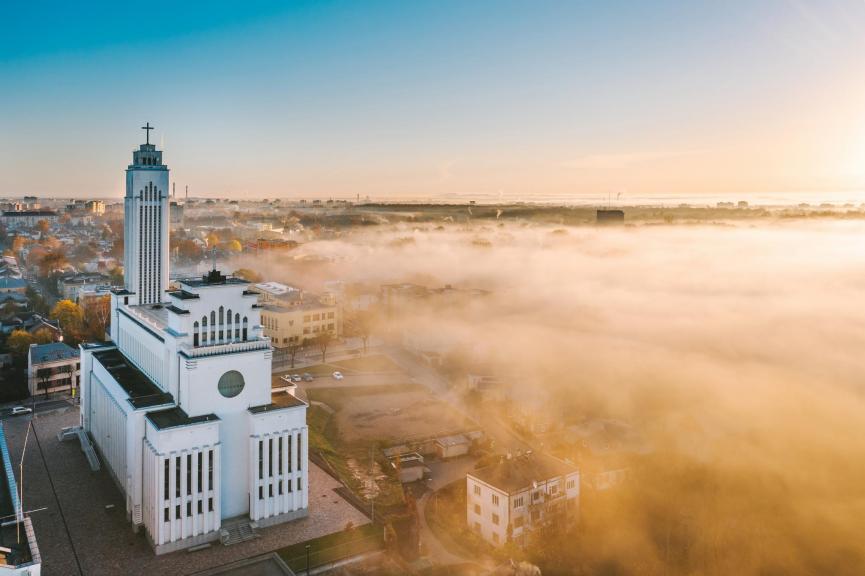 The majority of people arriving at Kaunas start their sightseeing tours at the partially rebuilt ruins of Kaunas Castle, the oldest building in the city and witness of Medieval times. In the remaining tower, there’s a permanent history exhibition hosted by Kaunas City Museum. Its staff offers quite a few exciting educational programmes to choose from. The valley surrounding the castle was used for defence purposes back in the day, but it’s a popular open-air event space in contemporary Kaunas. Check out the calendar – maybe there’s a concert scheduled during your trip to Kaunas? 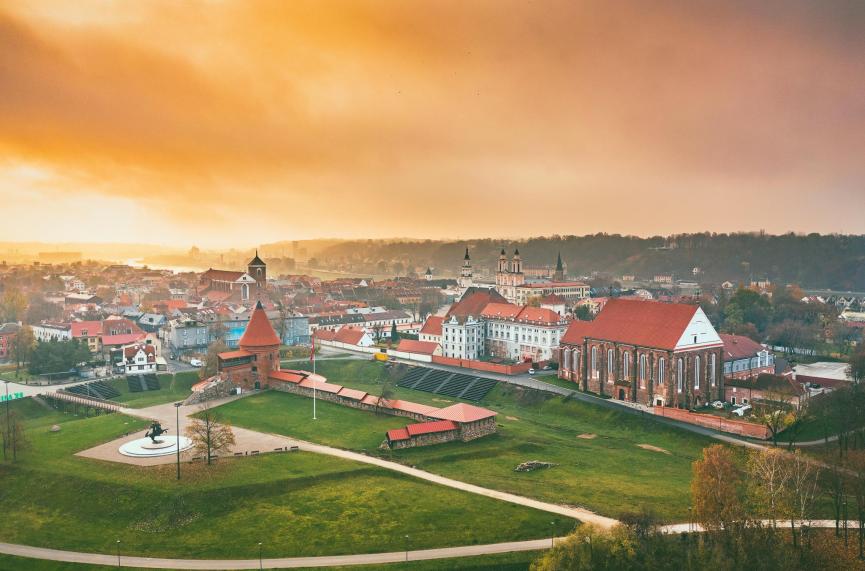 Nicknamed ‘The White Swan, The Town Hall is where lucky couples get married, as well as being the venue for prestigious international meetings. It’s also where the main exhibitions of the Kaunas City Museum will be showcased after the reconstruction is complete. For now, you can usually see a few temporary exhibitions, and if you have a head for heights, you can climb up the tower or, if not, explore the vaults of the building, which were once a jail! The KAUNAS IN tourism information centre is on the ground floor.

The Town Hall is surrounded by a dense perimeter of historic buildings facing the main square of Kaunas old town, including Saint Francis Xavier Church and monastery, Museum of the History of Lithuanian Medicine and Pharmacy, various cafes and restaurants. In winter, the Town Hall Square becomes the Christmas Market. 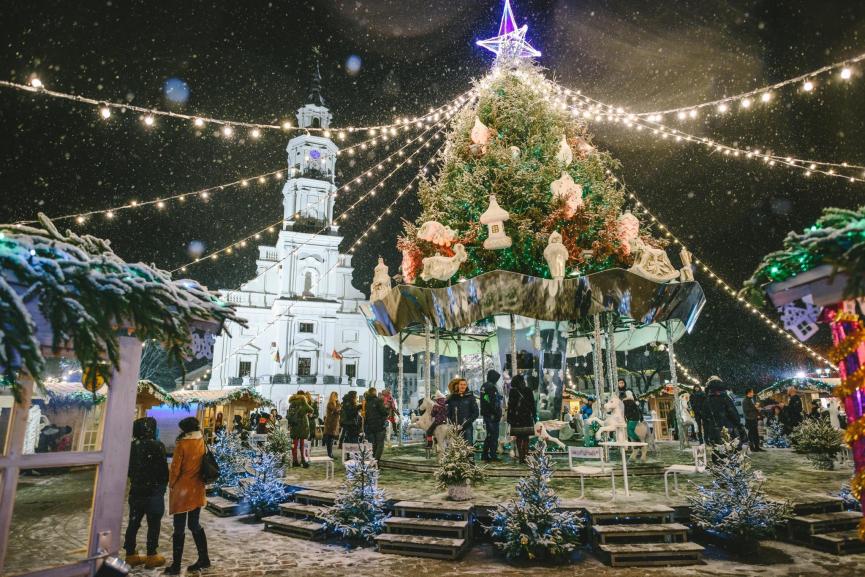 Ninth Fort of the Kaunas Fortress

The gigantic monument by Alfonsas Vincentas Ambraziūnas, Gediminas Baravykas and Vytautas Vielius, erected some 30 years ago, is one of the most awe-inspiring landmarks of Kaunas – and a reminder of all the blood that was spilt here. Before WW2, the Ninth Fort of the Kaunas Fortress (built by the Russian Tsar) was used as a jail. Later, thousands of Jews were killed here, coming from local vicinities and transported from other countries occupied by Nazi Germany. There is also a museum presenting the painful chapters of this period of history open here. 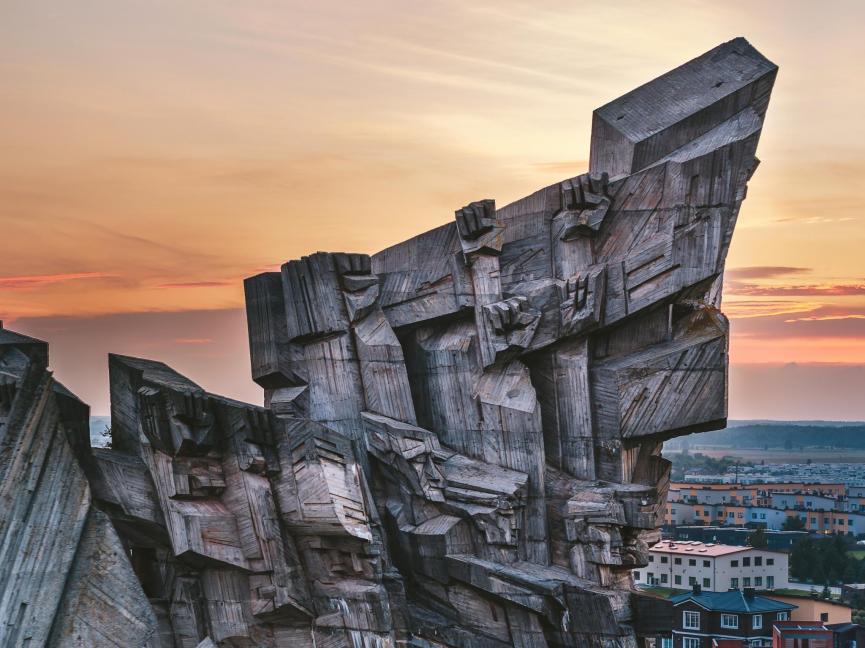 Since 2011, this has been the essential place to watch the most-awarded European basketball teams in action. It’s an absolute must to see BC Žalgiris Kaunas, Lithuania’s only Euroleague team, play! You’re also welcome to attend concerts of best local acts and platinum discs and award-winning international bands, singers and performers. Located on an island, the arena is the biggest and the best in the Baltics! It’s also a popular venue for fairs and exhibitions of all sorts, including food, fashion and career opportunities. 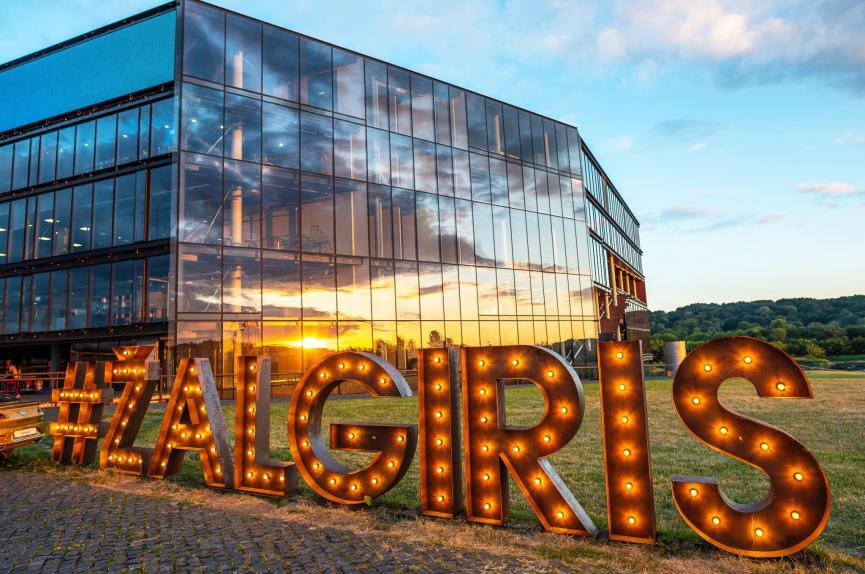 It’s a gallery open 24/7 – and always under construction! Vytenis Jakas, an artist who moved into a house in this courtyard more than a decade ago, noticed that neighbours were alienated – they had forgotten the collective past of the yard. Jakas received great support when he started transferring photographs of the Jewish families – who had previously lived here – on the walls. One after another, new objects continue to appear in the yard. New artists leave their traces here, neighbours’ festivities take place in the yard, which tourists usually visit. Just don’t forget that people live there, and they have their right to peace and quiet. 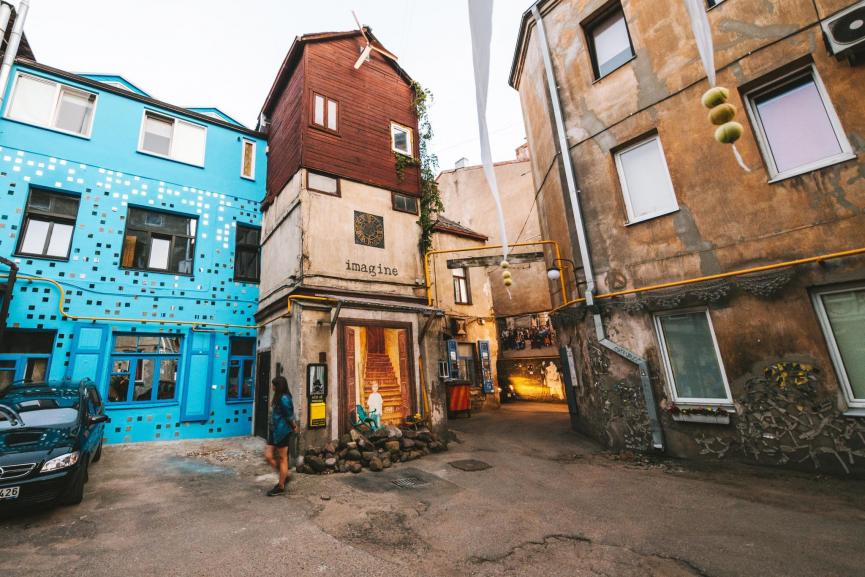 The architecture of Kaunas, famous for its unique modernist network dating back to the interwar period, is even more attractive inside the buildings. Why not pay a visit to an Art Deco apartment which was recently restored to its original beauty? It‘s a private initiative by Karolis Banys and Petras Gaidamavičius, where architecture and the authentic interior express how people lived in Kaunas city in the 1930s. Dozens of stories, original interior details (including a kitchen to die for) and a glass of bubbly… 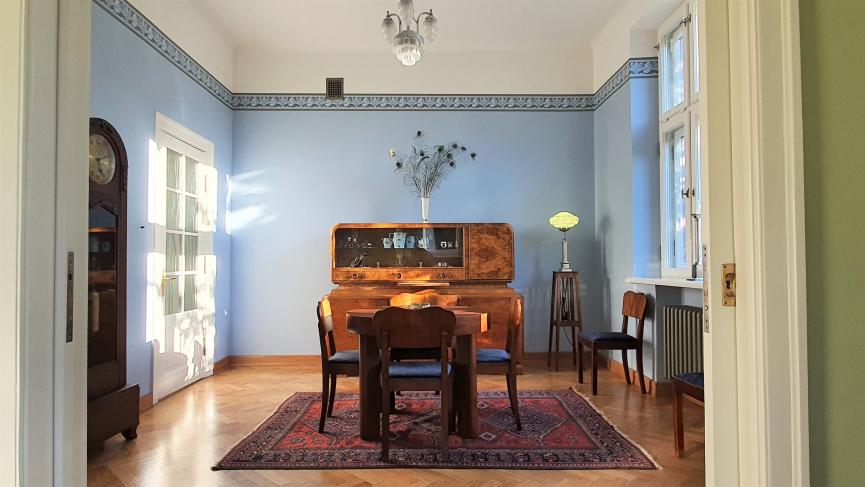 Neglected for many years, recently, this renewed public area has become the go-to place for dates, meetings, family time, BMX and skate rides, etc. Its design has already achieved international awards – these and your personal ones await to be celebrated at one of the cafes surrounding the square. 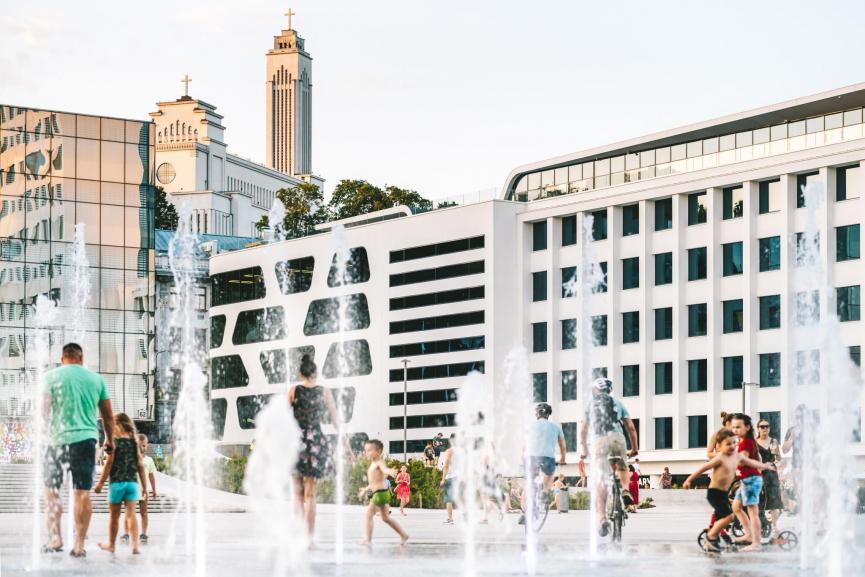 All photos by A. Aleksandravičius except Art Deco Museum