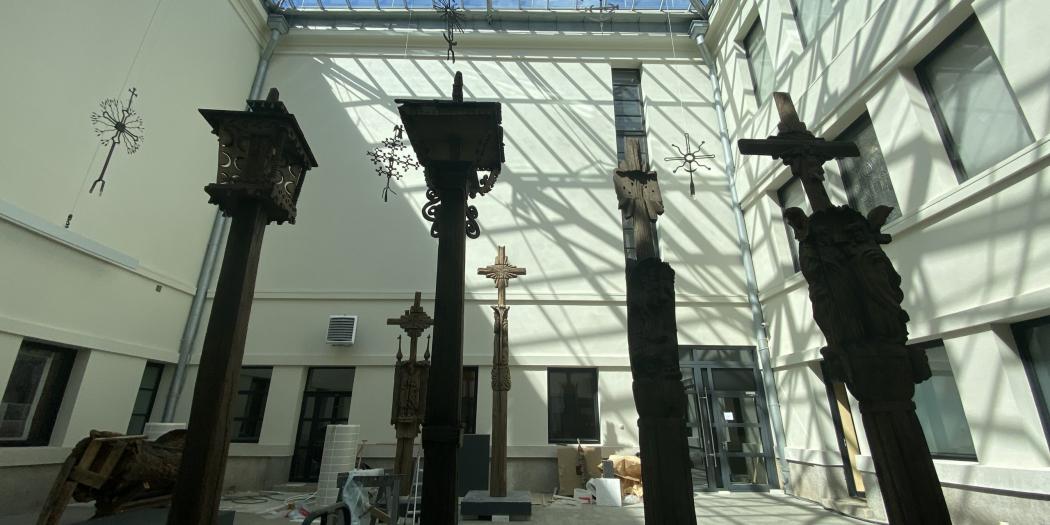 Year 2020 is the Year of Folk Art in Lithuania; to celebrate that, the National M. K. Čiurlionis Museum of Art offers a tour in three exhibitions revealing the unique heritage of our region. As the first head of the oldest and largest museum in Lithuania Paulius Galaunė once said, “Folklore and folk art keep a nation alive. They alone are the essence of a nation, they alone help prevent annihilation, they alone differentiate one nation from another.”

Over the course of time, Lithuanian culture branched out in three main directions: language, folklore and song, as well as folk art. The latter was influenced by the environment, the climate, various locations and resources, and also customs, which determined the purpose of the object, its form, its unique coloration and variation of pattern. The extended exhibitions in National M. K. Čiurlionis Museum of Art will help you to better understand the Lithuanian history and the point of view of its peoples.

The exhibition presents carvings and linocuts by Lithuanian folk and professional authors from the collections of the M. K. Čiurlionis National Museum of Art. All the carvings on display combine a word, a story, a narrative composing an integral whole.

In folk carvings, these are the word of God, religious stories, narratives of the saints, carved and ‘enlivened’ on the planks of branchless trees by known and anonymous folk masters. Usually, both sides of a plank were carved by means of blades and chisels. The compositions were printed manually by applying paint on a plank and pressing paper to it with a roller. When printed on a sheet of paper, the image was sometimes coloured with paint. Works of larger dimensions were composed of several fragments printed separately. When going to religious festivities, carvers used to take with them clichés and paint so that they could print more images on the spot in case they ran out of them. Thus, a self-educated Lithuanian engraver has combined the ancient Lithuanian worldview and peasant folklore with canonised Christian representations and deep-rooted European culture.

Linocut. Archive of the museum

Lithuanian crosses are a unique phenomenon. In 2001, UNESCO included Lithuanian cross-crafting in the representative list of masterpieces of the Intangible Cultural Heritage of Humanity. They are a synthesis of faith, tradition, artistry and craftsmanship. Lithuanians built crosses in memory of the dead or as symbols of spiritual protection. It is believed that, in pagan times, wooden pillars (the forerunners of crosses) marked significant places at homesteads and burial sites.

Christianity did not take hold easily in Lithuania. The cross was associated with invasions by the crusaders and the Livonian Brothers of the Sword. Nevertheless, the second wave of Christianization, successfully started by the Jesuit monks in the 17th century, won villagers over by imparting a new Christian meaning to the old customs and symbols: the signs of the sun and the moon used by the Balts were treated as a symbols of the virgin birth of Jesus.

Slowly, chapels and crosses were being erected everywhere – in the fields, by homesteads, near roads and at crossroads as protection for travellers, in forests, cemeteries and as an adornment of sacred sites. Their abundance is unique. 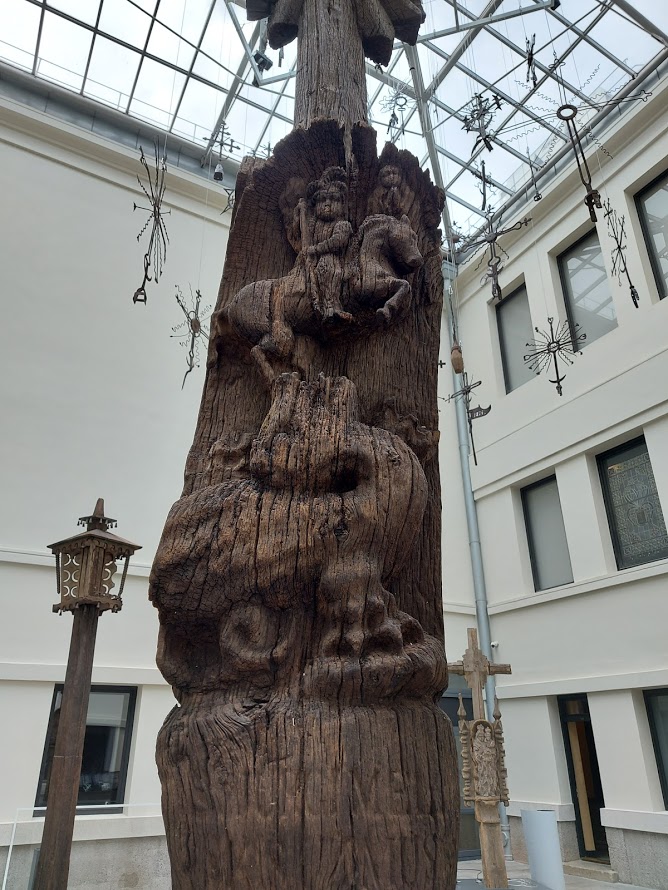 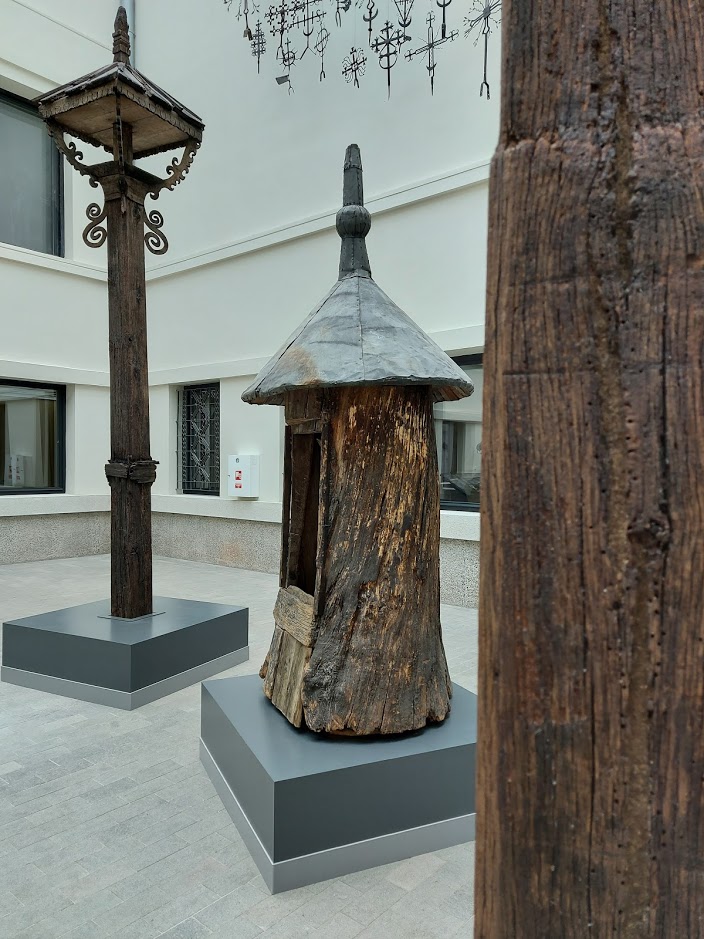 Photos by the museum

The exposition aims to unfold our nation’s cultural heritage of the 18th – 20th centuries through the M. K. Čiurlionis National Museum of Art’s collection of Lithuanian folk art which is comprised of 12,000 ethnocultural objects.

The title of the exhibition clearly defines the selection criteria: ancient articles that have remained unchanged for centuries, unaffected by urban culture and industrial influences. They are ritual or household objects that amaze with the complexity of forms, techniques and creative details, even though the decorative elements have retained the simplicity of prehistoric times (a dash and a dot – the starting point for the most ancient of symbols and signs are known almost worldwide, eg., a swastika, a cross, a grass-snake, a string). On display are handmade items of local raw materials (clay, wood, linen, wool) and meant for everyday use: ceramic tableware, weaving and spinning tools, fabrics and clothing details. Almost all of them have sacral, ritual meaning. This is why the oldest surviving headdress of a married woman, a rare ceremonial wedding cup, distaffs and spindles (the patterns and ornaments of which encode the signs of fortune, fertility and fecundity) have become the keynotes of the exhibition.

Until the early 20th century, territorial isolation was a characteristic feature of Lithuanian peasants’ lives – it predetermined their personal traits, artistic expression and ethnic specificity. As a result, the formation of traditions developed naturally by passing them from generation to generation. 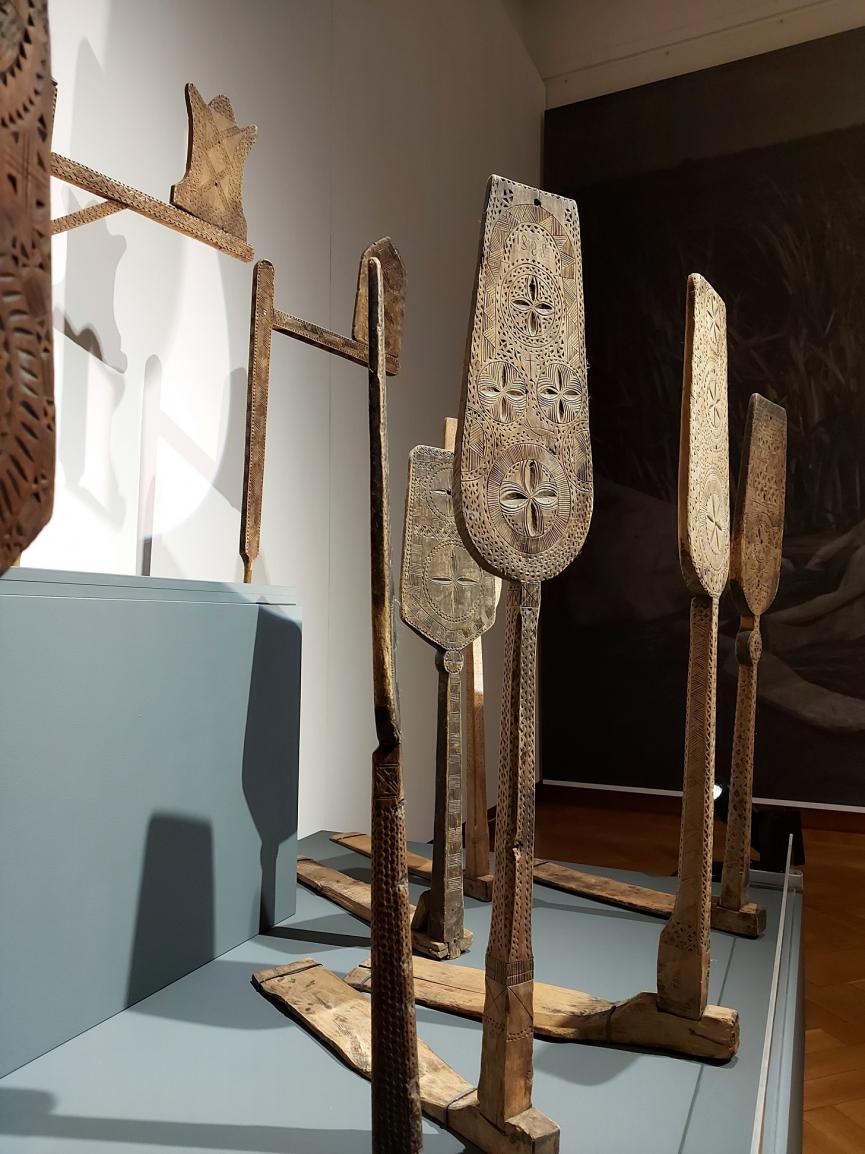