As the trees turn green and the weather warms up, achieving your daily steps goals is much easier. Here are four directions for inspiring walks. 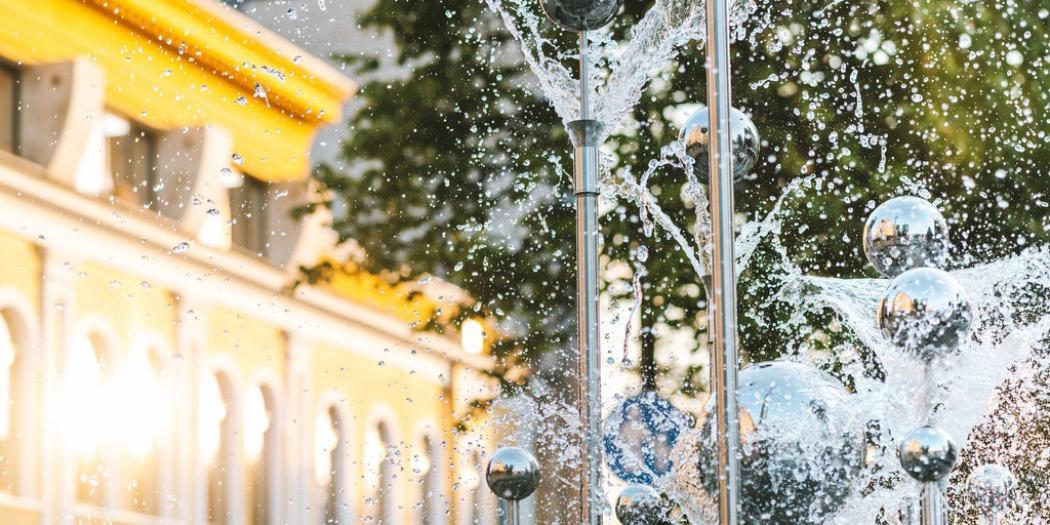 One of the most popular places to meet in Kaunas is the fountain at the intersection of S. Daukanto street and Laisvės Alėja. The pedestrian boulevard, which dates back to the 19th century, runs east and west - but what if we went north and south? After all, as the trees turn green and the weather warms up, achieving your daily steps goals is much easier. So this time, here are four directions for inspiring walks. All you have to do is plan a date at the fountain!

Let’s get some lunch before stepping further south. Paslėpti receptai, a homemade pasta restaurant, has recently set up shop on the corner, and a little further down S. DaukantosStreet is Buon Giorno, a lovely Italian trattoria. And now, onwards across the S. Daukantas Bridge. It connected the Nemunas Island and the centre of Kaunas in 1988. 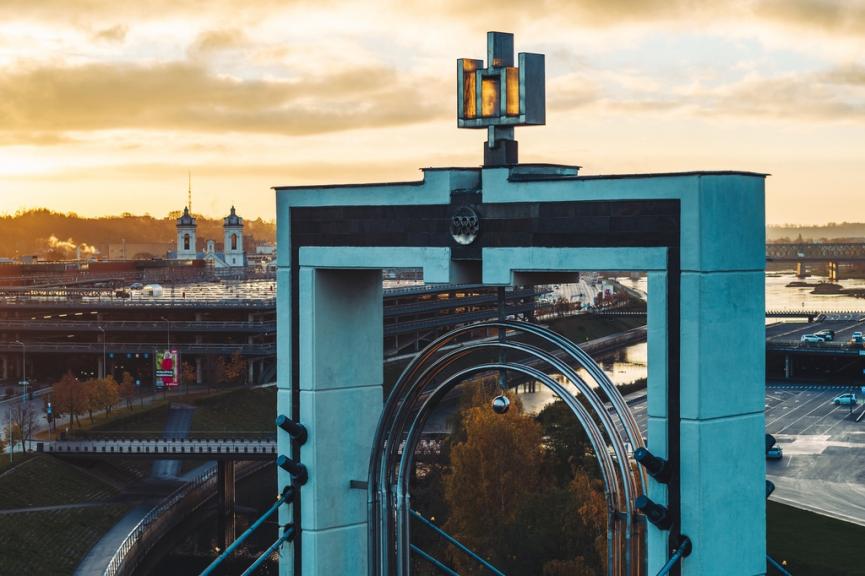 The suspension bridge is 151 metres long and is the most popular way for Žalgiris fans to get to the matches in the Arena. The island’s big news - the Science Island and the swimming pool complex - will be coming soon, so there’s some construction vibe, but there is plenty of greenery in this natural oasis. And if you’ve forgotten to dine in the centre, head to the Žalgirio Arena’s Sala restaurant offering great views of the other bank of the Nemunas...

... where we’ll be heading soon. However, you’ll have to return to Karaliaus Mindaugo Avenue to reach Vytautas the Great Bridge unless you're an excellent swimmer and not afraid of getting wet. Just kidding! Today, you’ll get to Aleksotas in less than half an hour, whereas it used to take up to two weeks. Why? Because different calendars were used in the Russian Empire and Western Europe.

On the other side of the Nemunas, you will see a funicular railway, which you are welcome to take to the Aleksotas observation deck. Wave, and you’ll see the Old Town of Kaunas smiling back at you... The impressive sundial shows the “true” time of Kaunas - a kind of protest against the system by its creators during the Soviet era.

After seeing the panorama of Kaunas, we invite you to discover Aleksotas - a historic part of Kaunas which is home to an airfield, a giant open-air market, the VMU Kaunas Botanical Garden, which is fascinating in all seasons, and even the forts of Kaunas Fortress. To ensure you don’t get lost, we’ve published the It's Kaunastic itinerary for Aleksotas - available at the Kaunas IN Tourist Information Centre at Laisvės al. 36 or online at www.kaunastika.lt. 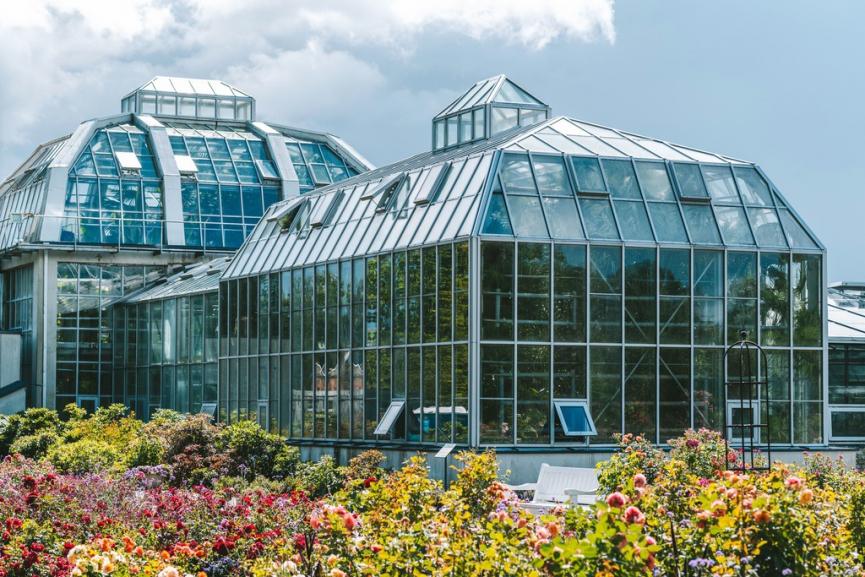 First stop - Vienybės (Unity) Square! The space, wholly redesigned a few years ago, has quickly become a favourite leisure destination for Kaunas residents. It’s a place to ride scooters, tricycles, skateboards and bicycles, share the day’s impressions, refresh yourself in the fountain, listen to concerts of the nearby carillon, or just drink coffee.

After a shot of espresso, it’s time to move on to the beautiful V. Putvinskio Street, a genuine avenue of modernism, with its famous museums, the Kaunas Artists’ House offering alternative events, and absolutely incredible architecture. You can spend several hours here. 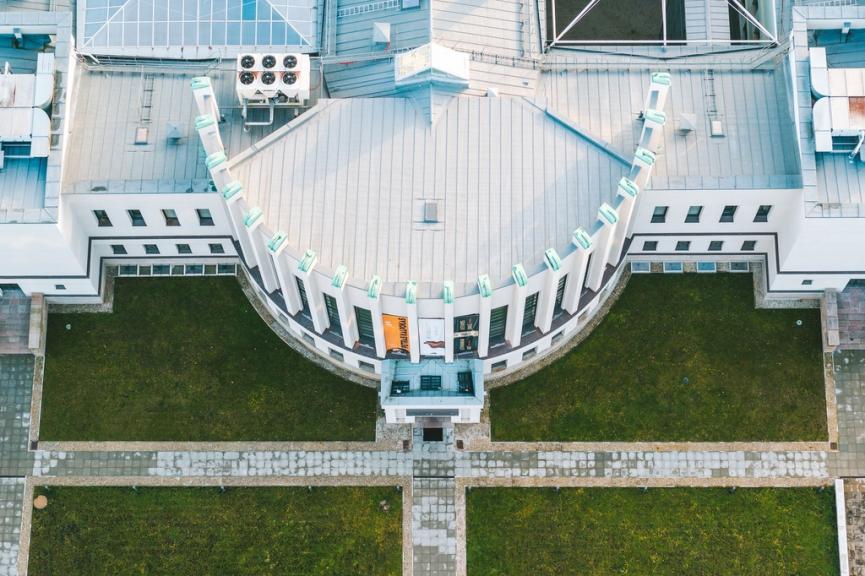 Got any energy left? Head to Žaliakalnis by one of Kaunas’ two historic funiculars or one of the many staircases. If it’s straight from Unity Square, let it be the Šilelis stairs. They consist of 256 steps, and at the top, you will find the wonderful Nenartavičiai family chapel. Nearby is the beautiful modernist Christ’s Resurrection Basilica. From its terrace, you can see all of Kaunas.

But head north, dive deeper into Žaliakalnis on Žemaičių street and meander through what the locals call “Compote” - it’s a neighbourhood with streets bearing the names of Strawberry, Cherry and Pear. Just marvel at the diversity of wooden and modern architecture, catch a concert in the old synagogue on Vaisių street and discover the “Brazilka”. In the early 20th century, the slopes of Žaliakalnis were home to Emigrants returning from South America - today, it’s like travelling in a time machine. And if you turn right from Žemaičių street, you'll find the Zanavykiai Market, where horses used to be sold, and today you can get fresh farmers’ produce. Come early. If you didn’t make it for shopping, you can still pose with a bronze statue of Bitė, a local Saint Bernard dog that used to come shopping here (author Lukas Šiupšinskas). 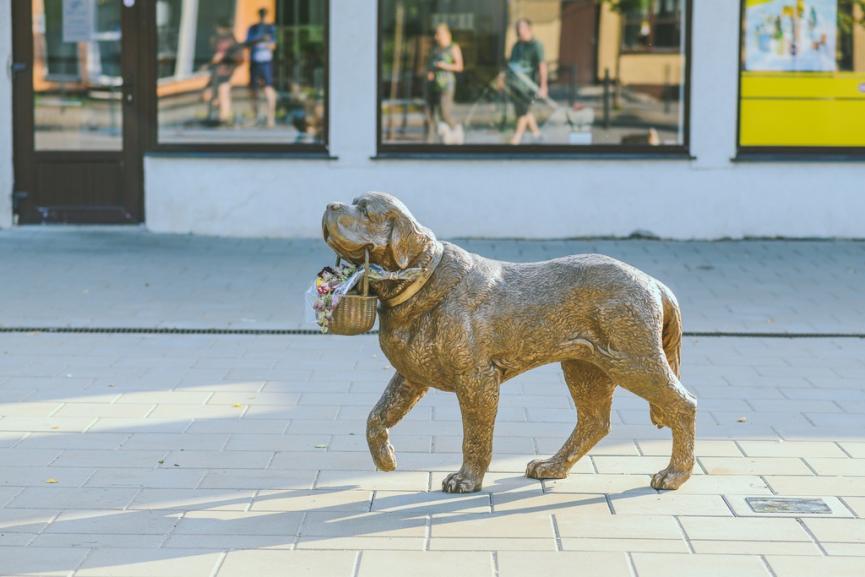 Shall we catch a movie? Romuva, Lithuania’s oldest and most beautiful cinema, has recently opened its doors after a five-year restoration. Seven days a week, it shows auteur films that are rare elsewhere - so you can start or end your date at Romuva any time. 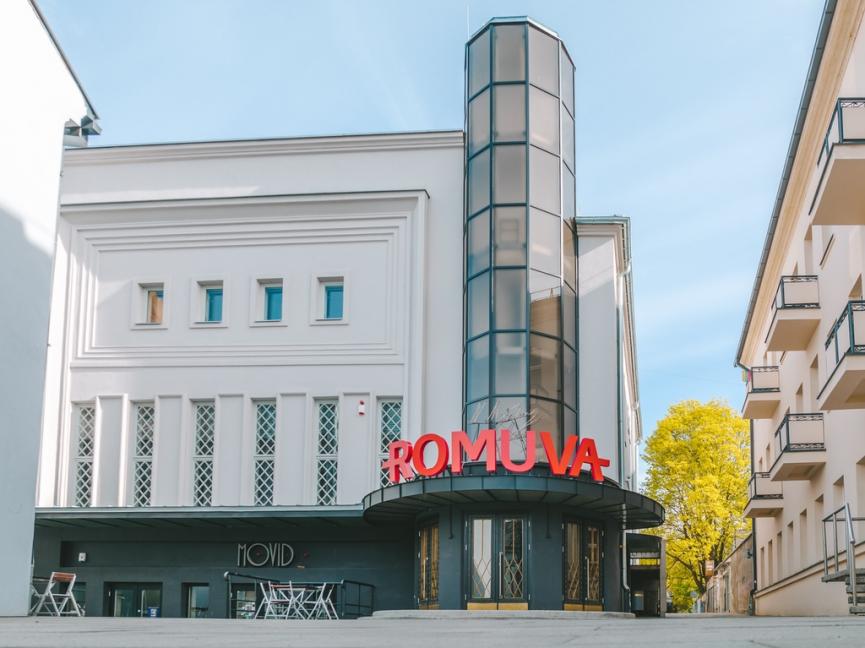 If it’s early, grab a coffee at the Green Cafe or the stylish Habits coffee house that recently opened near the Soboras church. And of course, come and visit us at the Kaunas 2022 and Kaunas In Tourist Information Centre at Laisvės al. 36 - we’ll recommend events, award you with colourful maps and help you choose the most kaunastic souvenirs.

And then get your soles on and climb to Žaliakalnis. If you follow the rules of the game, you’ll have to choose the stairs leading to Vytautas Park, located behind a short stretch of Laisvės Avenue, after crossing Vytautas Avenue. Doing so, you can see the handsome house number 58, inspired by Dutch interwar architecture and featured on HBO’s Chernobyl, on the right, or the impenetrable but exciting George Maciunas Square on the left.

After crossing Vytautas Park, one of the most charming parts of Žaliakalnis, or the Radio District, awaits you. It surrounds the former radiophone, from where “Hello, Hello, Kaunas, Lithuania, speaking” was heard in 1926. Perkūno Alėja is home to the historic Kaunas sports hall and a stadium behind it, and many fancy villas. On Vaižganto street, the Sugihara House Museum awaits. For more stories and addresses, see our guide to Žaliakalnis, available online at www.kaunastika.lt or at Laisvės al. 36. 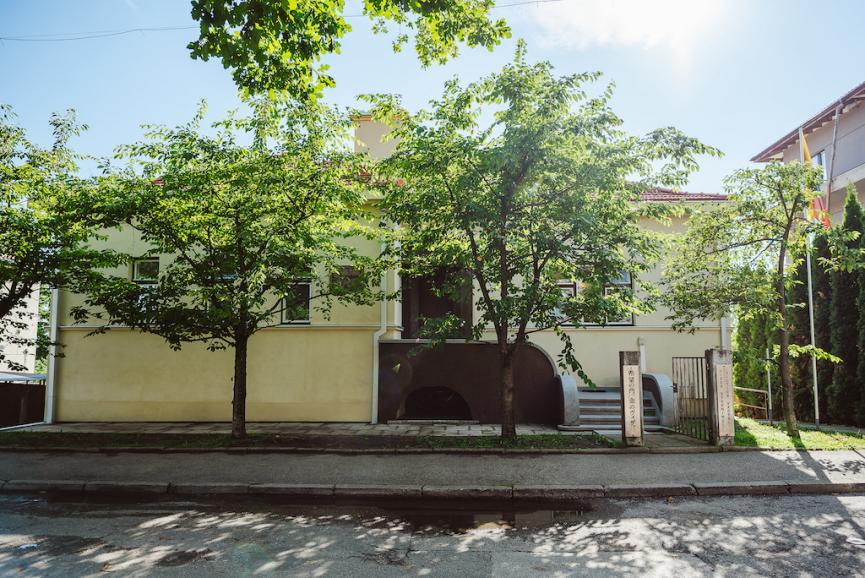 It can take several hours to reach the Old Town, depending on what you’re interested in. Perhaps you’ll wander through the courtyards of Laisvės Alėja in search of street art murals? There are dozens of them. Or maybe you have a ticket to the drama, puppet, musical or chamber theatres? They are next to the City Garden, which holds many stories. The Philharmonic Hall is also nearby, with its romantic classical concerts. 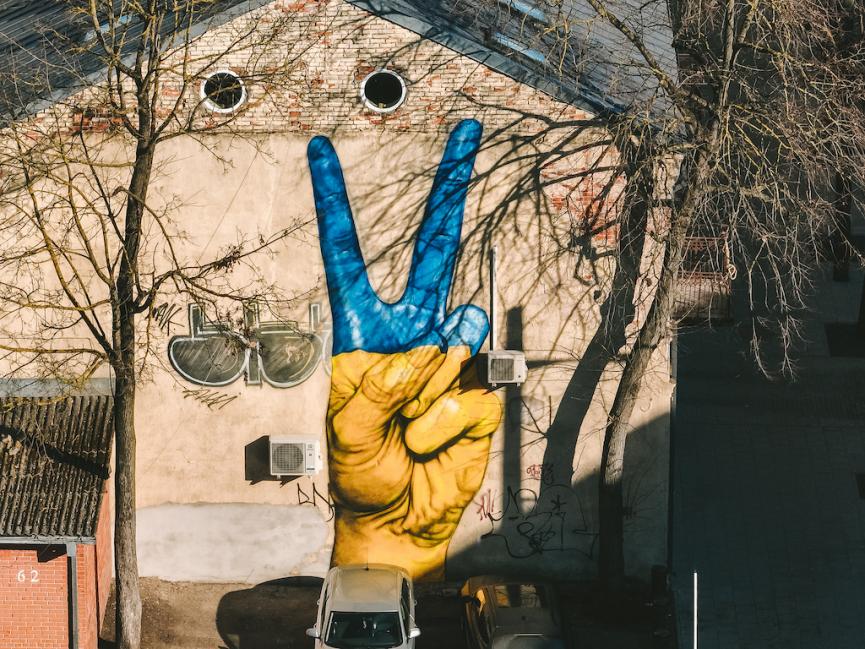 Today, Kaunas Central Post Office, stunning with its modernist forms, is transformed into an exhibition space. From 14 May, Kaunas 2022 invites you to go back to 1972, when Romas Kalanta set himself on fire in the same City Garden, and find out about the rebellious mood of the Kaunas of that time. On the other floors of the building is the cultural centre CulturEUkraine, dedicated to Ukrainians who have found refuge in our city but open to all creative souls.

Another noteworthy stop is St. Gertrude’s Church and the candle shrine next to it. Did you know that the Soviets wanted to demolish this Gothic beauty, one of the oldest in Kaunas, when they were planning new buildings? The people protested, and the church survived. 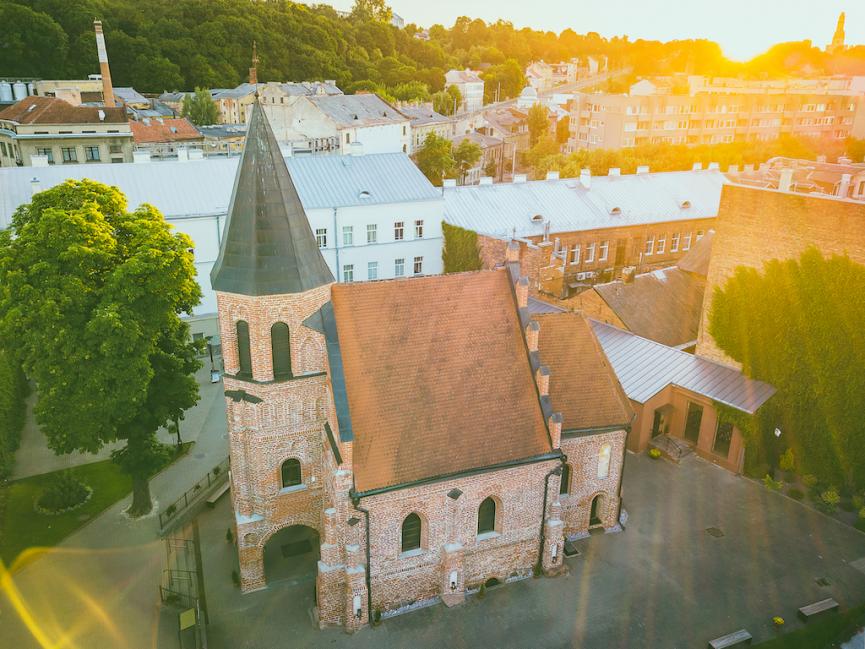 On the border of the New Town and the Old Town is the Historical Presidential Palace, which even has exhibitions in its garden. This building, which dates back to the time of the Tsarist Empire, hosts our recently rediscovered Act of Independence from 1918 until the end of the year and an interactive exhibition presenting all the governments and epochs. In fact, if you want to learn about Kaunas history and have just an hour to spare, we recommend coming precisely here.

If you still have some energy left and haven’t managed to walk the 10,000 steps of the day, you will undoubtedly do it in the Old Town. Discover the narrow streets, the art galleries and shops, the cosy restaurants and the authentic aura. If you’re looking for greenery, the confluence of the Nemunas and Neris rivers and its park will delight you, while basketball fans will be thrilled by the new Basketball House and the sculpture of its inventor James Naismith next to it (author Lukas Šiupšinskas).

Museum-lovers in the Old Town will enjoy the innovative exhibitions and garden of the Maironis Lithuanian Literature Museum, the Kaunas City Museum’s Folk Music and Castle Departments, and the Museum of the History of Lithuanian Medicine and Pharmacy. Each one is different, exciting, and a must-visit at least once in a lifetime. Maybe today is the day? 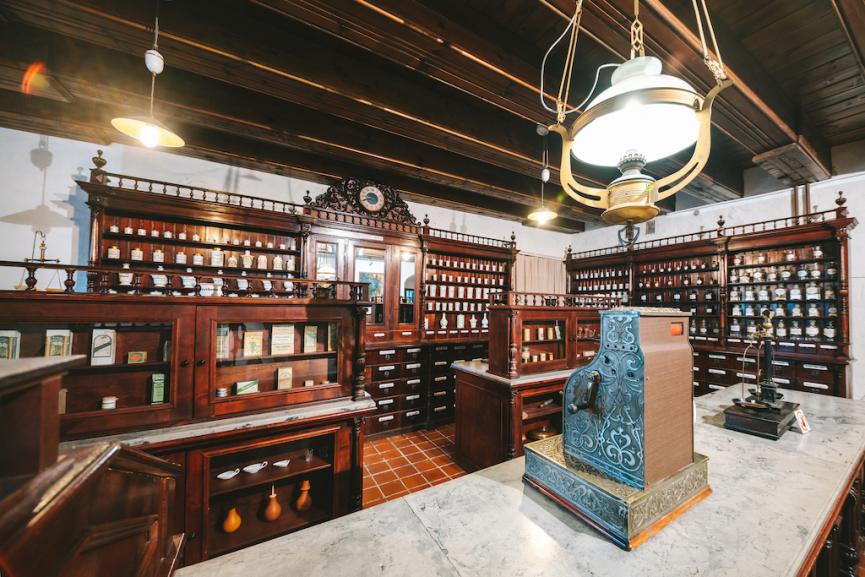