Kaunastic discoveries: A Book Club in a Priest’s Garden

The newest Kaunas Book Club, called precisely that, officially launched a couple of months ago in the garden of Maironis Lithuanian Literature Museum. 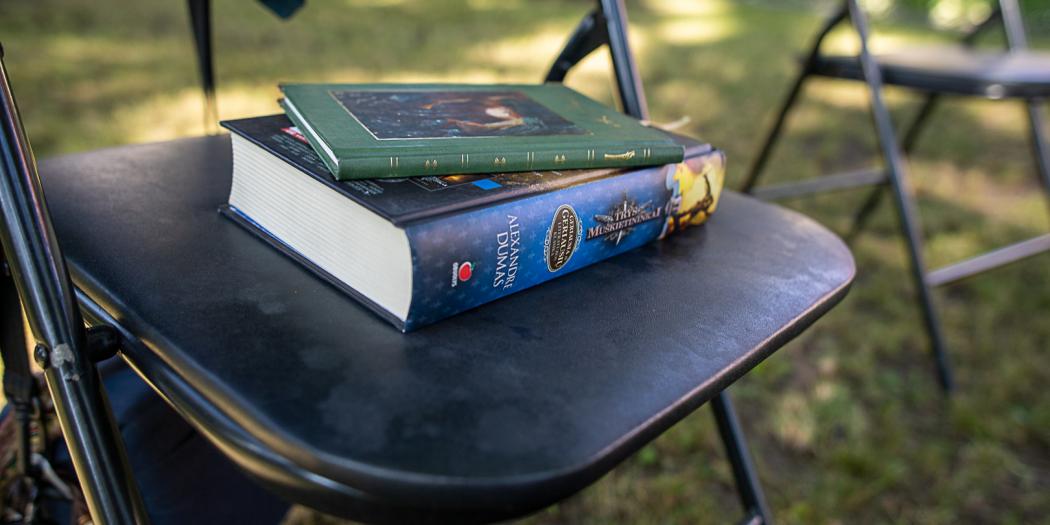 The tradition of book clubs is centuries-old and most definitely has local versions all around the world. In Kaunas, there are a few literary clubs, often in libraries, but not necessarily. Some of them even date back to the interwar era! The newest Kaunas Book Club, called precisely that, officially launched a couple of months ago in the garden of Maironis Lithuanian Literature Museum. The museum itself is in a baroque mansion once owned by Maironis, a priest and one of the best-known Lithuanian poets. So, it’s a very charming place to meet up and talk about books. We contacted the initiators of the new idea, Narmin Alieva and Anna Didžbanienė, to find out more about it. As Anna is the main organizer, Narmin decided to stay between the lines…

Oh, by the way, the next meeting of the club is scheduled for Thursday, August 27 and its theme is “The book I didn’t expect to like, but I did”. 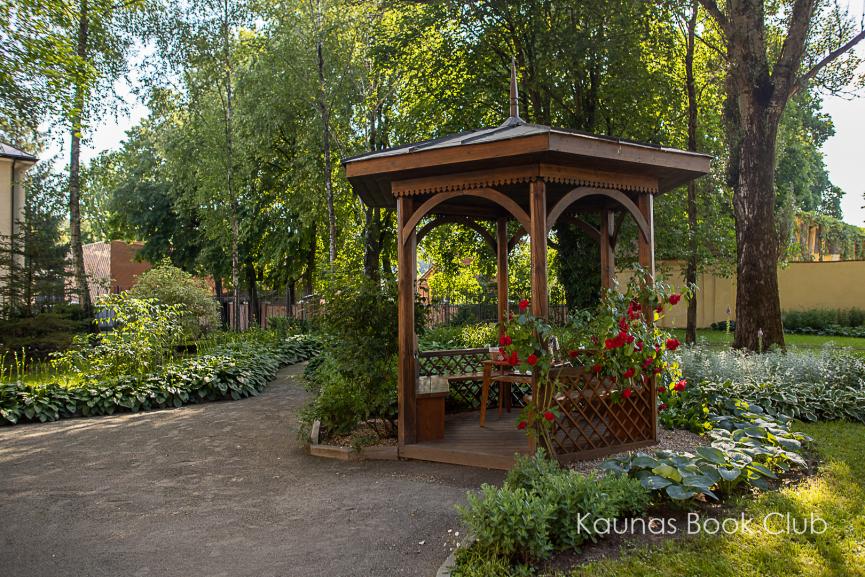 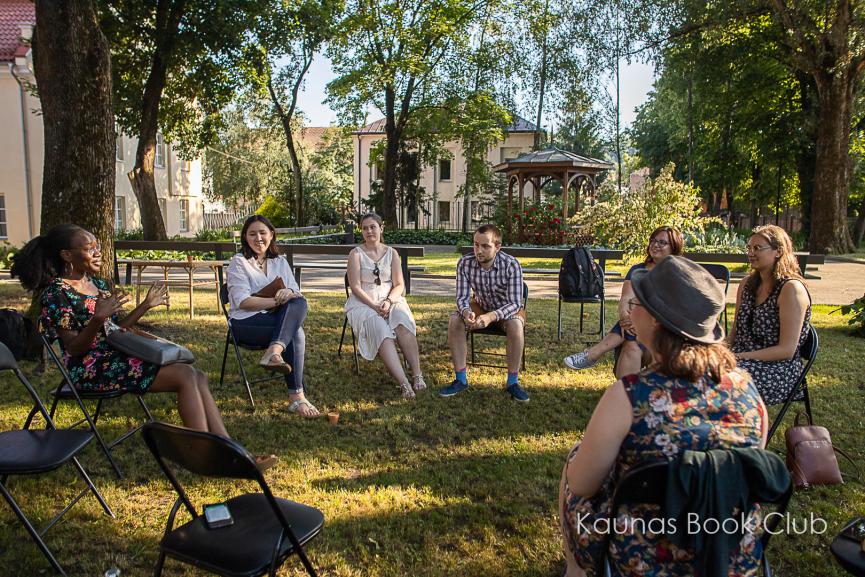 We have already introduced the absolutely kaunastic Narmin and her initiatives in our blog (click here for a story about her pub quizzes and here for Saturday tours), so it’s firstly interesting to find out more about you, Anna. What are you doing here in Kaunas? How long have you been living here?

I was actually born here, but my family decided to move away when I was very little. I only came back two years ago to work and stay with my spouse. I am now rediscovering this beautiful city, and I absolutely love it here.

What inspired you to start a book club? Maybe you attended clubs before, in other countries?

I lived in a small town in Scotland for five years, and we had these ‘cafe’ series of events designed to engage and educate people on various topics. I had such a good time hanging out there; I wanted to start something similar here in Kaunas. I was looking around for what was already available, and that’s how I met Narmin during one of her quiz nights, and became a regular since. I remember telling her about my inspiration and ambition, too. After almost two years of knowing each other, Narmin approached me recently – she had started SPEAK* social integration project in Kaunas, and we decided to give Kaunas Book Club a shot as a separate yet affiliated event.

How many people attended the first meeting and how many came back?

We only had two events so far. I was ready to start back in March, but this year had different plans for us all. We had eight people during our first meeting in June, and I believe eight joined the next time we met in July, must have been our lucky number. Half of them were returning, and the other half were new. I am equally excited to welcome either.

How can one join? Just read a book and come?

Pretty much! Right now, we try to pick a rather broad topic and take time to discuss books outside the main themes, as well. I appreciate everyone reads at a different pace, and life can get very hectic sometimes, so I don’t want to put any additional pressure onto anyone. So as long as you have read at least one book, you’re cordially invited to join us. We’re a relaxed and friendly bunch. The aim is to talk about something we all enjoy in an informal atmosphere and hopefully learn something from it and meet new people along the way.

How do you pick books and themes for the meetings?

I have come up with a rather long list of various topics and choose a few for attendees to pick from at the end of the event. It will be our third meet-up at the end of August actually. We have already discussed quite a few books from our childhood and compared differences and similarities across the cultures, which was incredibly engaging. We have also discussed the books that shaped us into personalities we have become and had another wide range of titles: from classic novels to self-help books. We don’t aim to all read the same book; however, I hope we can also pick a more extended term topic at some point, and read a book nominated for one of the awards (for example Hugo, Nebula, or Pulitzer) and then discuss our impressions of it a few months later. We also do book swaps at the end of the evening for those interested. 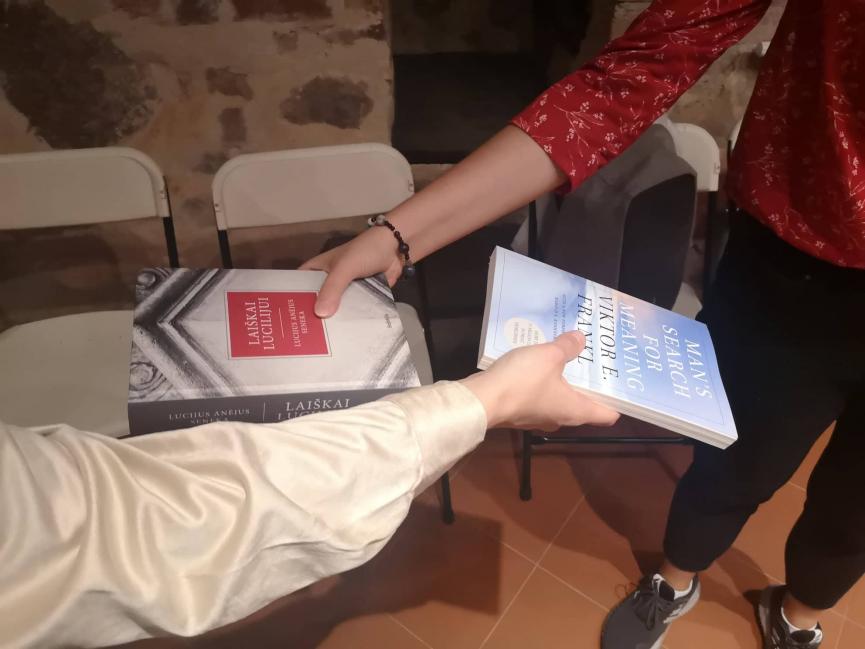 Do Lithuanians also attend, or only foreigners living here in Kaunas?

Our audience is half local and half foreign so far, and this balance makes me very happy. It’s an excellent opportunity to practice spoken English language for everyone, but also a way to welcome ex-pats and foreigners, and even help them integrate into the social life of the city.

Why the Maironis Lithuanian Literature Museum? Obviously, it’s a literature museum, so it’s an instant connection, but maybe there is a story behind it?

I met Deimantė, the director of the museum; she shared the excitement of hosting an international book club community and has kindly let us meet at the premises of the museum. Weather permitting we stay in the garden, or in the cosy cellar downstairs otherwise. Museum staff provides us with hot water so we can enjoy some tea and biscuits, which is very sweet and accommodating of them. 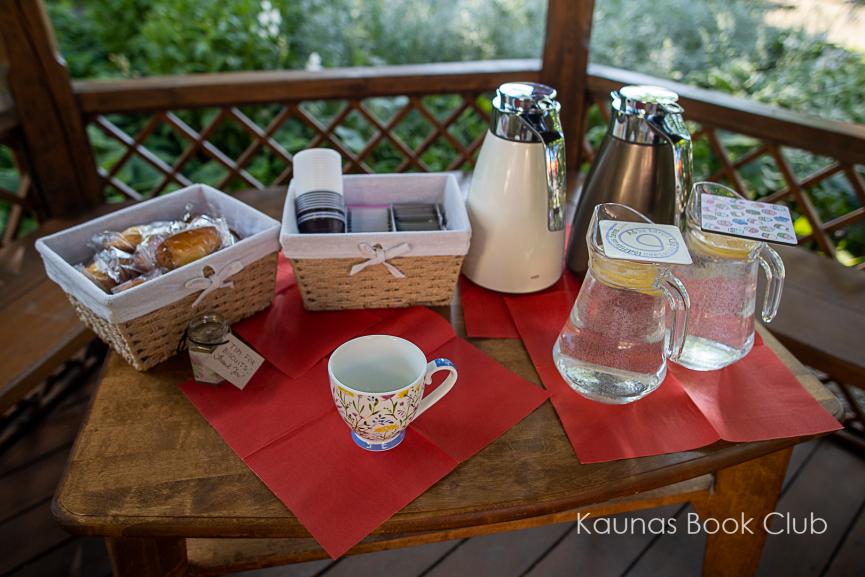 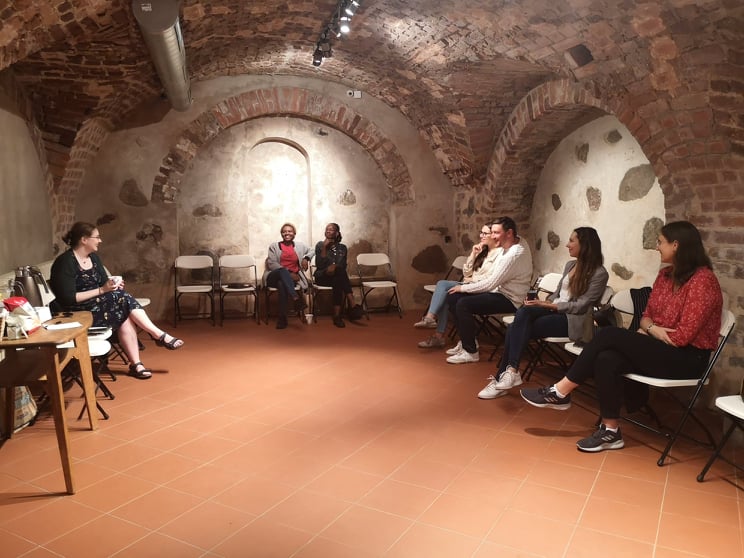 Where in Kaunas do you like to buy or borrow books? Favourite libraries or shops?

I buy my books both online and from the ‘physical’ shops. I prefer small local shops best, and my most recent haul came from “Tūkstantis ir viena knyga“. Sometimes I will just see a book on a shelf in a corner shop and know it’s the book I have to take home with me. I am actually planning on visiting a few libraries around the town to find out which ones are the most friendly towards the foreign readers.

Favourite places to read in Kaunas.

Kaunas is a very peaceful city, it’s hard to choose, really. The confluence of Nemunas and Neris, Lakštingalų valley and my own garden – I love being surrounded by the greenery. Stairs of Soboras is another wonderful place where you can really feel the flow of life around you as people pass by.

Do you have a favourite book ABOUT Kaunas?

I don’t think I have one just yet, but now that you asked, I am determined to find the one.

*SPEAK connects migrants, refugees and locals living in the same city through a language and culture exchange program.
Find SPEAK Kaunas group here.
To become a buddy and share the language, click here.
To become an ambassador and organize community events, click here.