The private museum’s collection is not only recognized by international experts but was also featured in the famous HBO Chernobyl series. 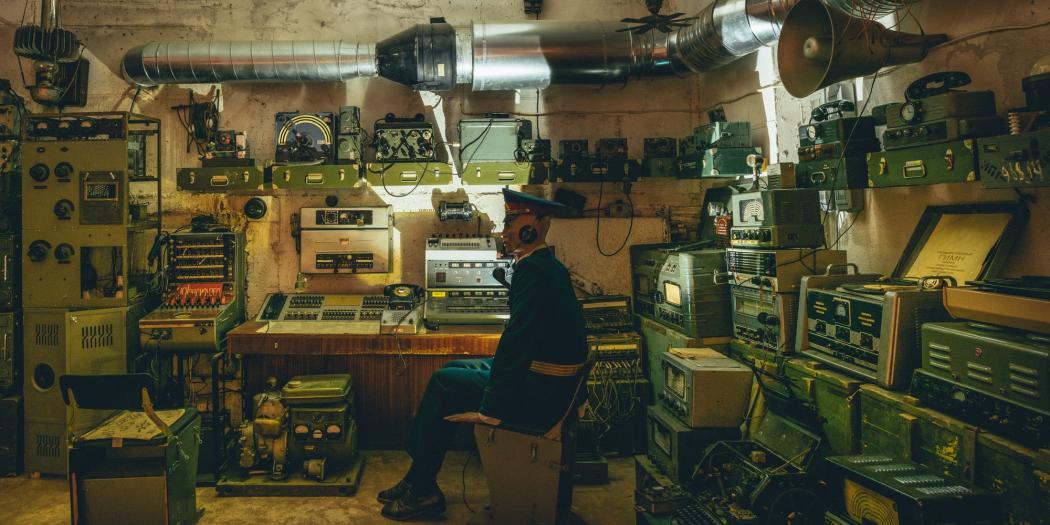 In Vilijampolė, in the former Aidas factory, or more precisely, seven meters below it, an era of the past opens up. A bomb shelter belonging to a factory that used to produce children’s furniture, prams, musical instruments, and flashlights is currently a museum called the Atomic Bunker (with a KGB bunker inside). As you arrive, the first thing you notice – planted near the entrance of the museum – is the foreign body of these times. Rescued from a scrapyard, there lie cast iron, half-a-ton–weighing Soviet decorations of the Vytautas the Great Bridge. And this is only the beginning!

The collection of Atomic Bunker surprises with impressive Cold War artefacts, weapons, unique equipment of KGB, NKVD, and even independent Lithuanian agents, authentically equipped interrogation rooms, schemes and stories revealing how the oppressive system functioned, as well as various household or luxury items from different decades of the 20th century. In addition to that, this museum in Kaunas, which was opened in 2014, soon moved across the Atlantic. Most of the collection is currently on display in the museum’s New York department. The new KGB Spy Museum that opened its doors in Manhattan in 2019 and its founders – a businessman Julius Urbaitis and his Daughter Agnė Urbaitytė – immediately received a lot of public and media attention. The exclusive museum was mentioned in Vice, The New York Times, The Wall Street Journal, Forbes, and New Yorker. 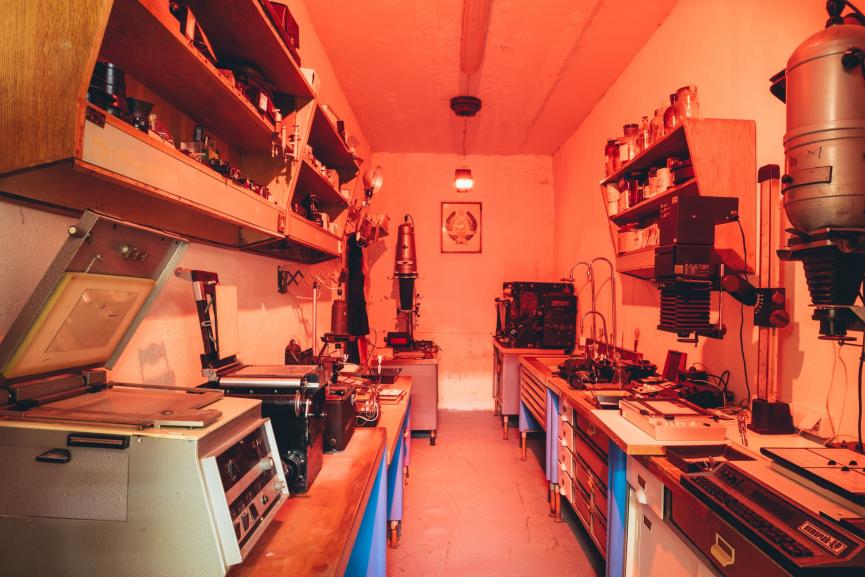 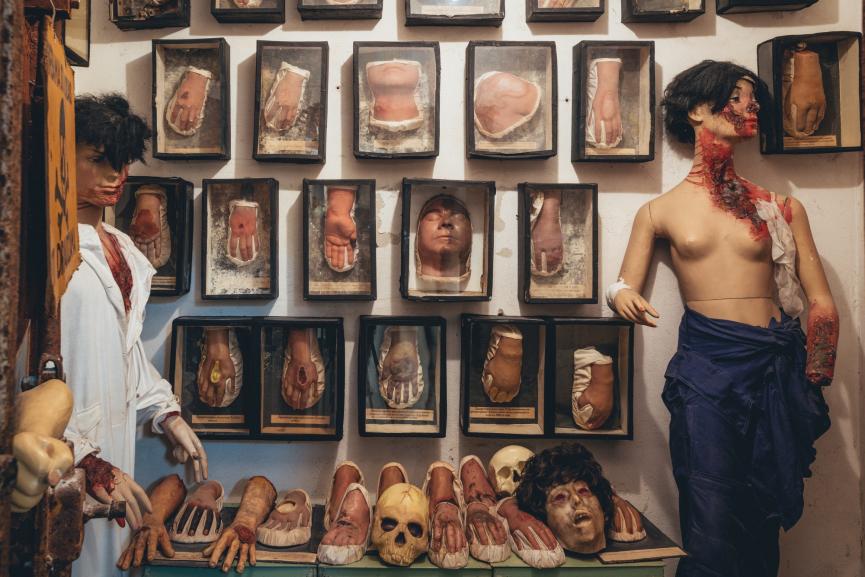 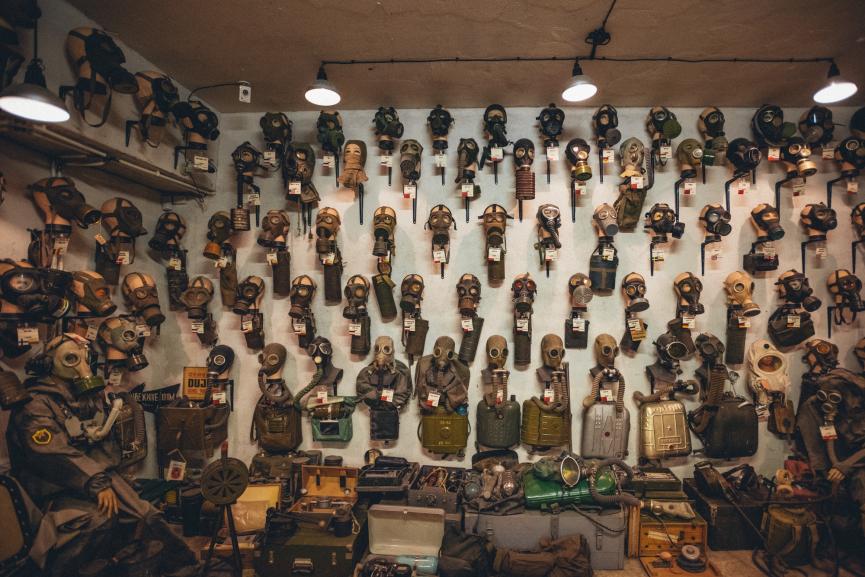 After the collapse of the occupation regime, most of the Soviet bomb shelters were privatized and looted. According to J. Urbaitis, there were over 200 of them in Kaunas alone and about 300 in Vilnius. The collector says the bunkers were installed at every major factory, as well as in residential areas, sometimes under churches or hospitals (they cannot be bombed under international agreements). Some of the hiding places were command posts; the rest were for civilians. However, Rimas Urbaitis, who works as a Cold War fonds keeper at Atomic Bunker remembers a visitor, who claimed the hideouts were not for everyone, “Interestingly, although the larger factories employed thousands of people, the shelter was able to accommodate only 200. It would seem that they were only for the management, as confirmed by a story recently told by a former Aidas’ employee, who claimed to have worked there all his life but knew nothing about the hideout.”

According to the fonds keeper, 200 people could have survived for three days in the Aidas’ factory hideout. The premises could be accessed through two metal, sealed doors; there were two stair entrances and one exit through a 70-meter-long underground tunnel. The shelter is divided into the main room with plank-beds, ventilation, gas masks, food storage rooms, and toilets. Radiation measurement equipment and protective suits for outdoor use in hazardous conditions were also stored here.

It all started with the dance

The story of the Atomic Bunker started relatively recently, in 2013. A. Urbaitytė, a dancer at the Kaunas Dance Theatre Aura, together with her father, opened a dance and movement studio called Dance Bunker. The studio hosted contemporary dance, ballet, yoga, and fitness training classes for children and adults.

When resurrecting the former Soviet civil defence bunker to a new life, the founders had to work hard. The acquired shelter was not only looted but also seriously flooded (according to the museum’s founder, as many as eight sewage pumping machines had to be pumped out).

After the establishment of the dance studio, the specific atmosphere of the place dictated the theme. In order to create an authentic shelter atmosphere, J. Urbaitis acquired the first Soviet gas masks, which were used to decorate the walls of the dance hall. Such were the origins of the collection.

J. Urbaitis says that since he was a kid, he liked to collect various things, and would dedicate time and meticulous work to the hobby. Before taking an interest in the topic of the Cold War and secret agencies, he used to collect motorcycles, paintings, cars, adjustable keys, and so on.

The largest collection in the world

In 2018, a book The Secret History of KGB Spy Cameras was published in the US, and Julius Urbaitis made a significant contribution to it. The book contains photographs of exhibits belonging to the collector; the authors used his expert opinion and consultations. According to J. Urbaitis, the author of the book H. Keith Melton, who is also one of the owners of the most McDonald’s franchises, intelligence historian and collector of intelligence equipment, together with other authors and experts who worked on the book, acknowledged that the Atomic Bunker collection is the largest collection of KGB intelligence equipment in the world.

The museum’s collection is not only recognized by international experts but was also featured in the famous HBO Chernobyl series, to which J. Urbaitis sold or rented out part of the authentic exhibits of that time. At the end of the series, the production team visited the KGB Spy Museum in New York.

Perhaps the most surprising thing in the museum is the ingenuity of the special services equipment seen only in the old films about Agent 007.

According to Julius Urbaitis, spy equipment was manufactured for specific situations, which is why almost all devices are unique and especially difficult to obtain.

Among the weapons exhibited in Kaunas, you can see firing small-calibre pen guns and lipstick pistols (and in the New York department you can find a Bulgarian “killer” umbrella, which was able to fire a dose of poison).

As eccentric is the range of tracking devices displayed in the museum: miniature film cameras mounted on a jacket button, on a handle of a handbag, a belt buckle or a pack of cigarettes; containers for transferring photographic films, cameras or other information that the agent hid in a shoe brush (the brush would open up with a needle or safety pin pressed into a miniature hole hidden between the bristles), the heel of the shoe, cuffs or even in the rectum. Bugs would also be placed in the most unexpected spots, for example, when a fridge would be returned to you after repairs, all your kitchen conversations could be heard through the microphone and transmitter built into the refrigerator condenser.

Here you can also find the equipment that helped agents pull out the letter without opening the envelope, unlock all doors, unobtrusively remove the seals from the door, or even detect a person hiding based on a heartbeat. 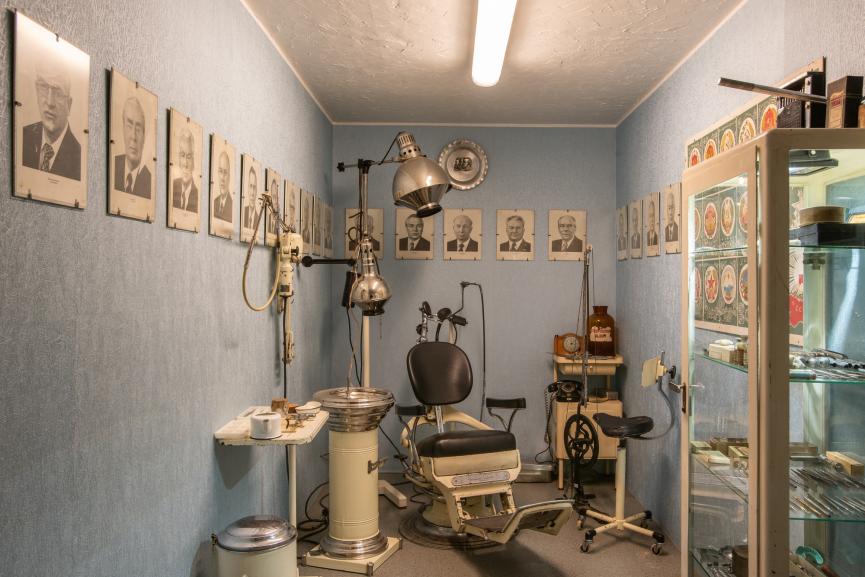 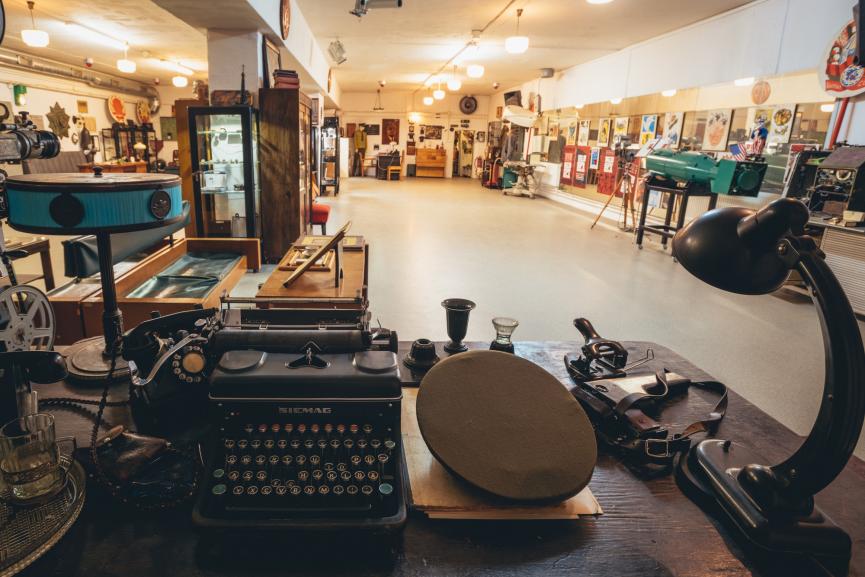 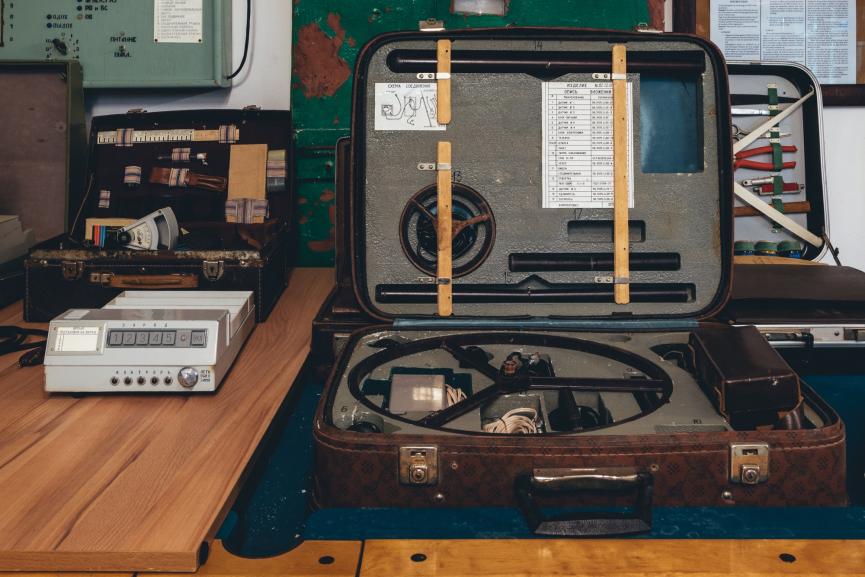 The museum is full of interesting things and significant historical artefacts. One of the most subtle ones is a miniature depicting a thoughtful grim reaper sitting next to M. K. Čiurlionis painting Tranquility and looking at a truck carrying an atomic bomb.

And one of the spookiest exhibits is a little room that contains a heap of mannequins (made during the cold war) with various injuries caused by a lethal level of radiation.

The museum contains separate rooms dedicated to a huge collection of various gas masks, a dental office with a scary treadle drill, and an ancient photo laboratory with spine-chilling photos. There is also an impressive collection of military radio stations, including a huge single piece of Latvian radio made of Karelian birch to reward Stalin (yet never delivered) and next to it stands an even larger projector with three red stars, which, according to the museum fonds’ keeper Rimas Urbaitis, stood in Brezhnev’s villa in Palanga resort.

Breaking away from the Soviet era, we will find the first telephone (still working) of Lithuanian president Antanas Smetona.

This story is only a small part of the experiences and impressions that you will take away with you after visiting Lithuanian or American museums, filled with incredible objects and stories marking the dark time of our history. By the way, the founders of the museum present the museum as an apolitical institution whose mission is education and preservation of authentic history. Therefore, we wish this transatlantic atomic idea a successful implementation!