Kaunastic Summer: A Lagoon of Flavours and new Spaces for Music and Relaxation

We are not only the European Capital of Culture, not only a contemporary capital but also the only kaunastic city in the world, especially great in the summertime. 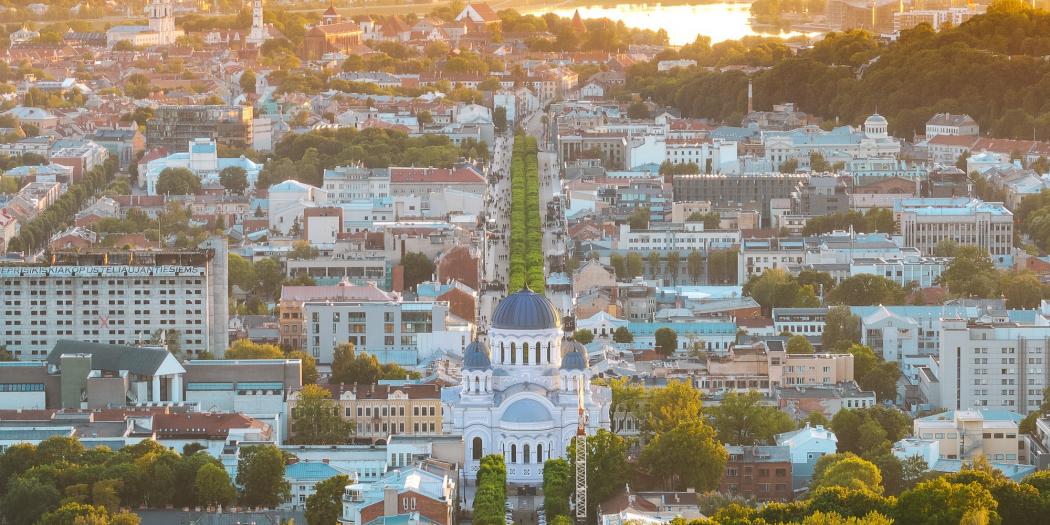 This year, Kaunas is in the spotlight of Europe, and we are pleased when travellers tag their experiences not only with #Kaunas2022 but also with #kaunastic. Yes, we are not only the European Capital of Culture, not only a contemporary capital but also the only kaunastic city in the world. No matter where you’re from, you’ll get that feeling in the first few moments of your stay in Kaunas.

We hope you choose a sustainable way to explore Kaunas - on foot, by bicycle (this year, there are also electric bikes on the streets) or by scooter. Or maybe public transport will be a pleasant exotic experience, too - after all, the historic funicular is the most beautiful way to reach Žaliakalnis or Aleksotas from the centre.

For those who plan every trip based on the lunch and dinner offerings, there’s always something unvisited in Kaunas. Have you visited the ‘Marina Taste Gallery’, which offers perhaps the most picturesque panorama, and ‘Iešmas ir ližė’, located in the renaissance Kaunas Lagoon Yacht Club? Both after a swim and instead of a trip to the seaside, you always want to stay longer.

There’s also a mountain of undiscovered spots in the city centre. A Kaunas-based brewery Genys has set up its new taproom on Vilniaus Street. At the same time, breakfast mecca ‘Holy Donut’ invites you to enjoy bagels, pancakes and mimosas in a new spot on M. Valančiaus Street. For special moments, the ‘Boheme House’, with its exquisite interior and its terrace revealing an unseen panorama of the Old Town, is a tempting place. 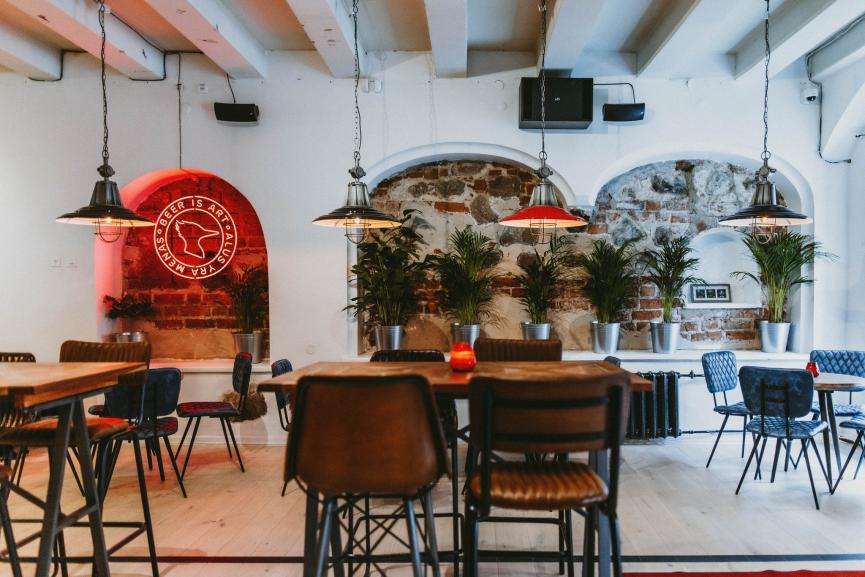 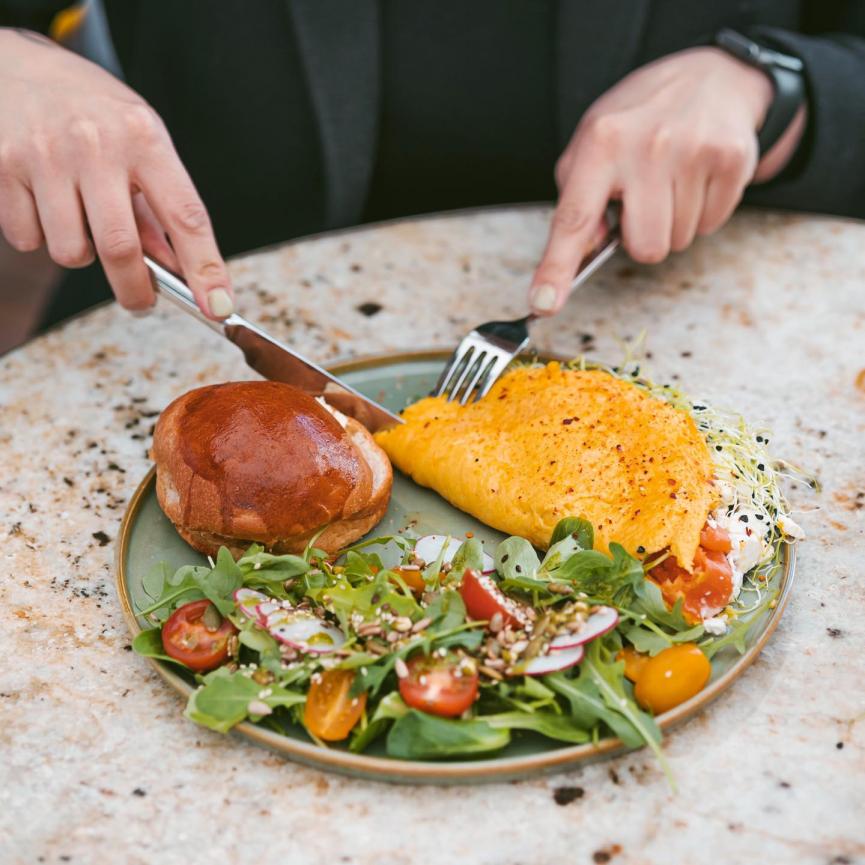 New in Žaliakalnis is a food truck spot on K. Petrausko Street, near the S. Darius and S. Girėnas Stadium, which will open its gates soon. ‘Po Perkūnais’ is a great place to unwind after a day of active leisure in Ąžuolynas.

Another street food oasis, which is becoming increasingly popular, is ‘Brastos Square’ in Vilijampolė, just behind the P. Vileišio Bridge, opposite Kaunas Castle. By the way, a unique music club on the trolleybuses ‘14th Stop’ will soon open its doors here too.

An authentic Italian gelateria opened its doors right next to the Town Hall Square in June. In other words, all the paths of foodies lead if not to Rome, then to Muitinės Street. ‘Angolo Italiano’ is the name of this place, run by an Italian gelato master Alessandro.

Experienced travellers know that excellent restaurants and bars are hidden in hotels. Radisson Hotel Kaunas invites you to ‘Two Senses’ by introducing the ‘fire in the kitchen and ice in the bar’ formula. This is where you can try a one-of-a-kind kaunastic cocktail. 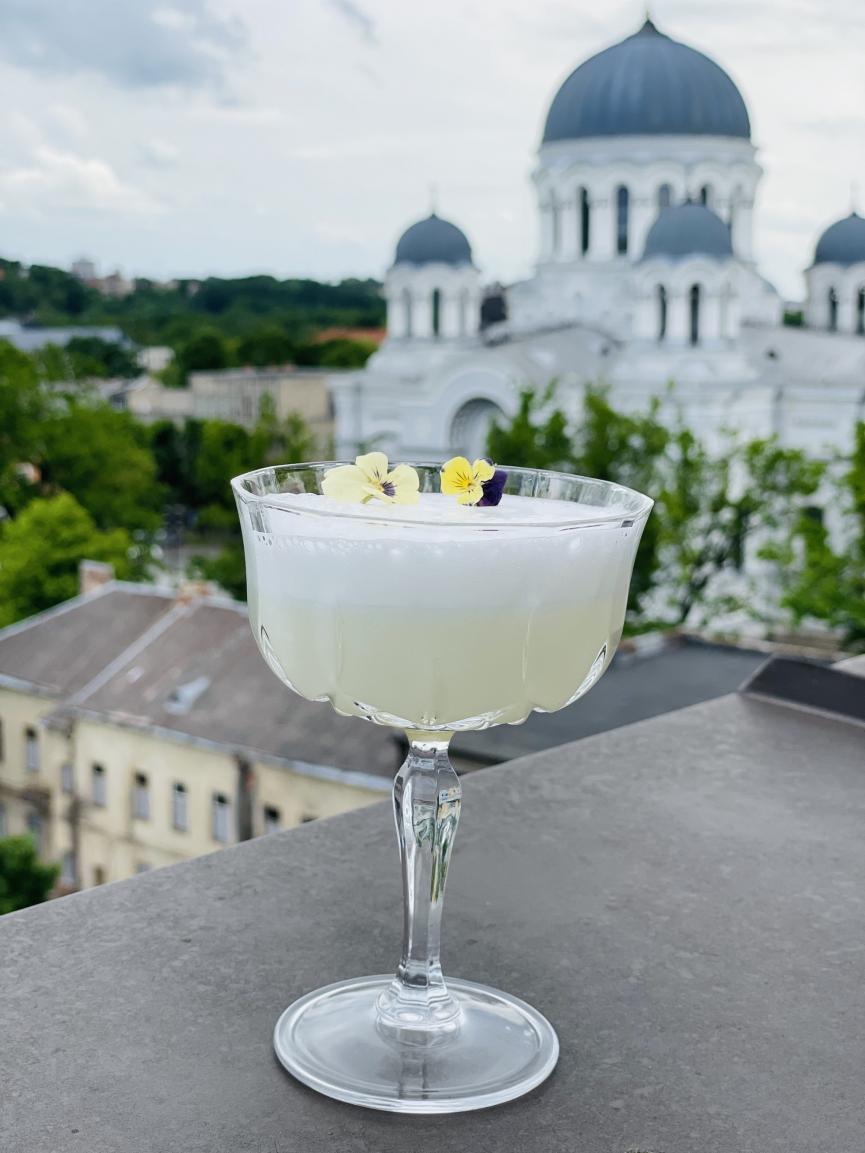 Holidays with music and cinema

The most exciting news of the season is the Kaunas 2022 Summer Stage at the Town Hall Square. Dozens of concerts and other events are planned until autumn, featuring up-and-coming and established Lithuanian names and exciting guests from near and far abroad. 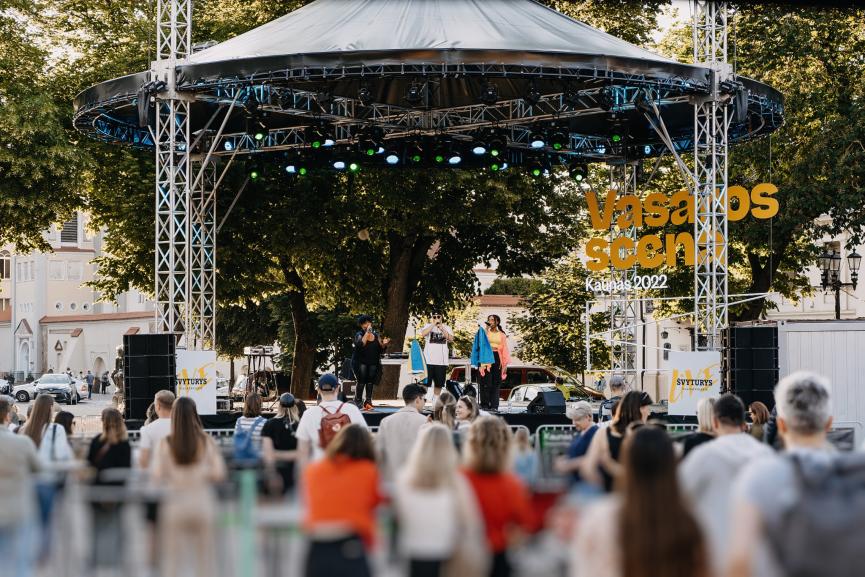 For a few summers now, the entertainment space ‘Pakrantė’ on the island of Nemunas near Žalgiris Arena has been delighting with the sounds of music of both Lithuanian and foreign performers.

Although the M. Žilinskas Art Gallery is undergoing renovation, this does not prevent the terrace ‘Laukas’, located in the vicinity of the gallery, from inviting music lovers to interesting musical adventures several times a week. The venue can accommodate stand-up comedians as well as exotics such as the Japanese girl trio Kuunatic (almost #kaunastic!), who will play in Kaunas on 28 June. Oh, and the food menu at ‘Laukas’ is worth a look! 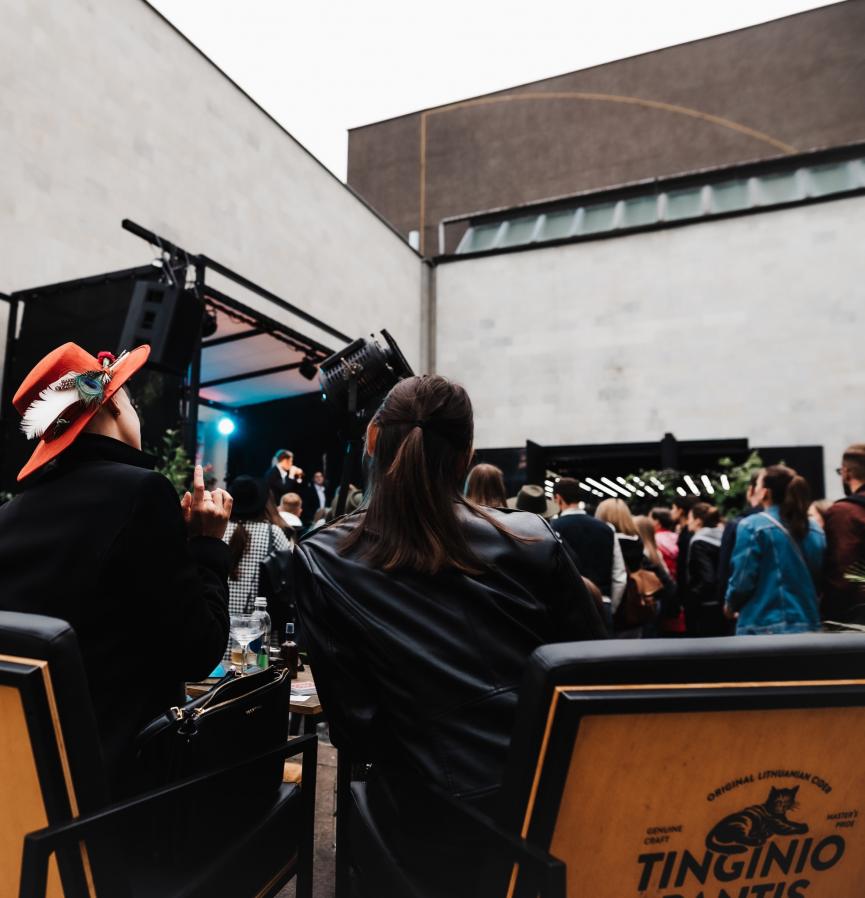 The historical Kaunas cinema centre Romuva is offering open-air screenings in the Lithuanian Education History Museum courtyard at Vytauto Pr 52. And if it rains, Romuva itself, recently opened after a thorough renovation, is waiting for you.

Suppose we add up all the major museums, memorial houses and private initiatives. In that case, we have about three dozen of these institutions in Kaunas, so we can rightly call ourselves a museum city. The institutions in Kaunas are regularly being revitalised, with new exhibits arriving and innovative exhibitions being set up. And then there’s the private Art Deco Museum, which opened last year and where you absolutely must book a tour.

The last Sunday of each month is a free museum visit day for museums under the Ministry of Culture, so you are lucky if you are in Kaunas, for example, on 26 June, 31 July or 28 August. This year, exhibitions of world-class artists by Kaunas 2022 are on display at the National Museum of Art of M.K. Čiurlionis and Kaunas Picture Gallery, while Kaunas Central Post Office and other unexpected places in the city have also become a space for intriguing art shows. For those with kids, a must-visit is the Folk Music Department of the Kaunas City Museum, located on L. Zamenhof Street, which will surprise you with its sounding stairs. House-museums are also becoming increasingly popular - who wouldn’t be interested in seeing how composers, opera stars or writers once lived? 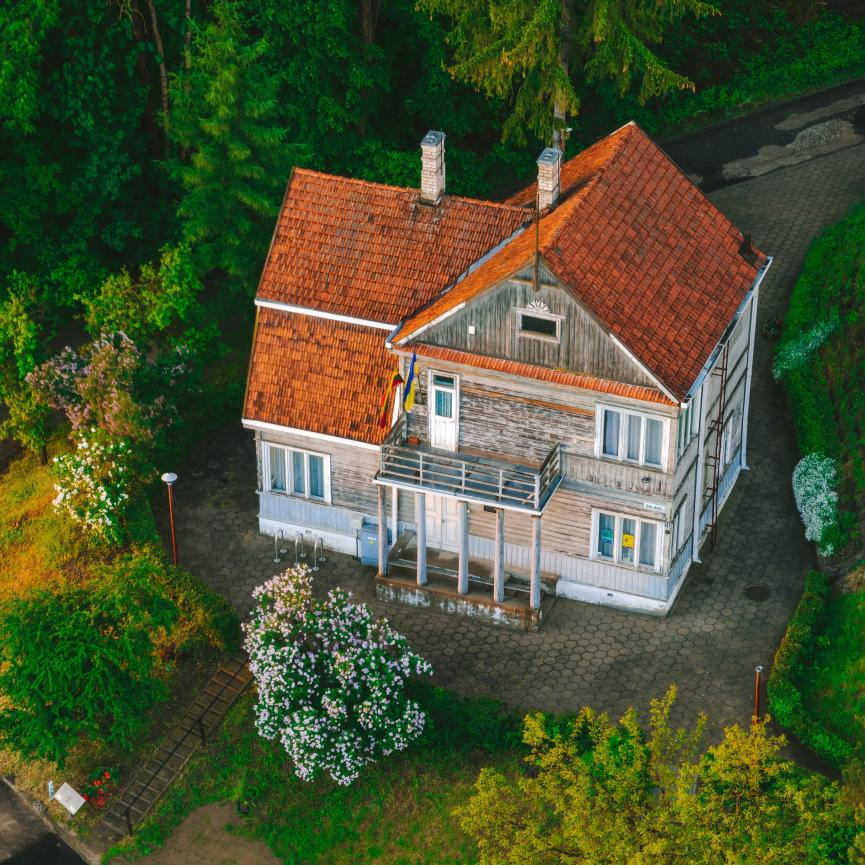 House of composer Juozas Gruodis awaits on Saturdays. Photo by A. Aleksandravičius

City beach, anyone? Or have you been to the Museum of Sacred Art in Pažaislis Monastery? Maybe it’s time to learn how to wakeboard or just go hiking? The nature around Kaunas allows you to do all this and more.

After a stroll in Panemunė Šiliai, you can enjoy the sun on the banks of the Nemunas River and grab a pizza at a place named ‘Ipanema’. Those who love reading will enjoy the V. Kudirka Library’s summer reading room in the popular Kalniečiai Park. The season’s hit is Santaka Park, which has just been officially opened after a careful renovation. 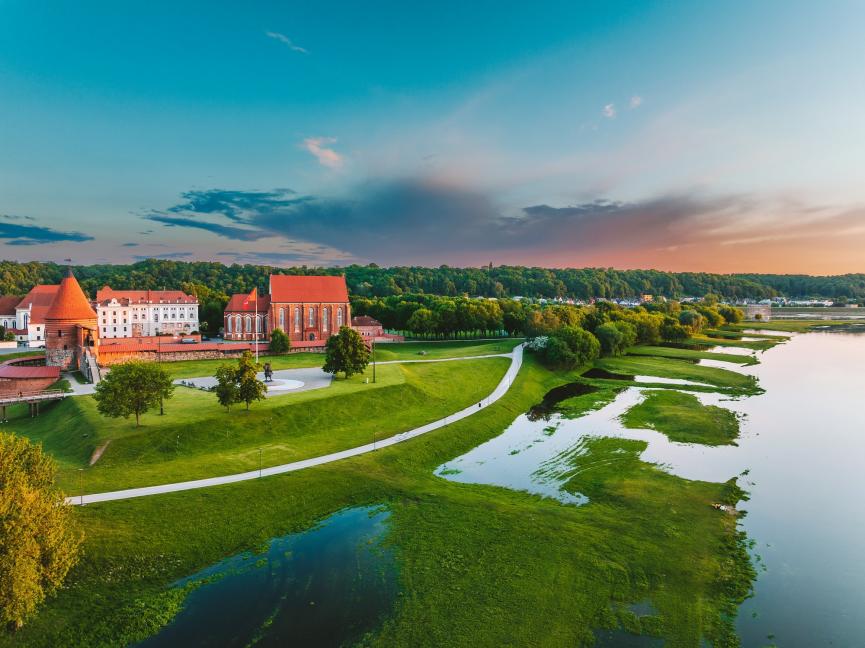 See here for a list of cognitive trails, here and here for weekend ideas in Lampėdžiai and by the Kaunas Lagoon.

Holidays are a great time to discover corners of Kaunas that you may not have seen before, perhaps not for the first time. For example, do you know what the city looks like from the water? Check out our recommended boat trips and excursions here. Don’t forget a trip to Zapyškis, where the exclusive culture boat Nemuno7 recently docked, offering topical exhibitions and an oasis for the soul.

Kaunas from a bird’s eye view is yet another romantic idea for a holiday in our city. Sightseeing flights are offered by the association Pilotai.lt, whose ultralight planes are waiting for you at S. Darius and S. Girėnas Aerodrome. Hot air ballooning is also a kaunastic way to start or end your day. Choose from offers here. 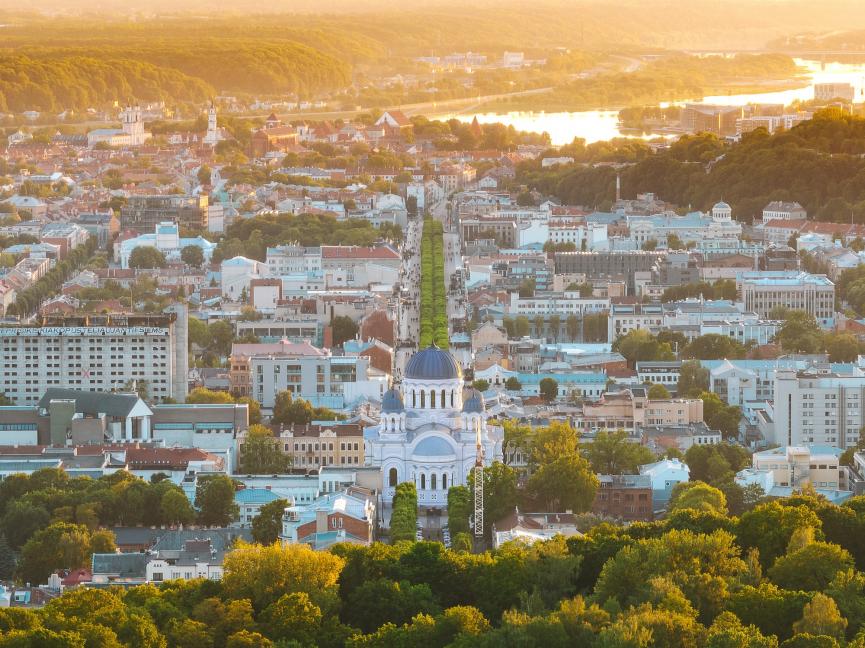 You don’t have to go to a remote spa to get the rest, relaxation and pampering you need for body and soul. The exclusive Aušra SPA, a spa, sauna and pool area, is open in the centre of the city, on Vytauto Pr. It’s not only pleasant, but it’s also very instagrammable! Those who like to travel to the East will love the services offered by East Island SPA, located in Kaunas Akropolis. At Manilla Medical SPA, near Kaunas Central Post Office, in the heart of the city, you will discover the latest science-based body and facial treatments inspired by Eastern culture.

One of the advantages of travelling is that after a long day of discovery, you don’t return to your home for the night, but to a hotel for another exciting experience. The Kaunas 2022 Hospitality Programme offers several of those. Whether it’s an authentic wooden villa in the historic district or Panemune, a cosy apartment in an Italian-style inter-war house or a 70’s-inspired stay in a busy neighbourhood, it will be a night or two to remember. For more about Experience Kaunas programme, click here. 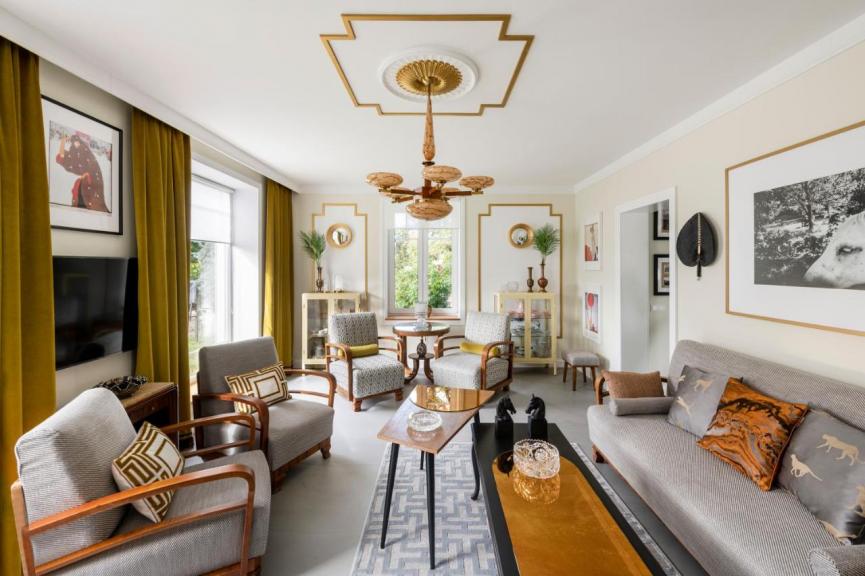 Grabytė villa in Panemunė. Photo by the owners.

And that’s not all - from boutique holidays at the cinematic Monte Pacis hospitality complex in Pažaislis Monastery and one of the best business-friendly hotels in the region, Radisson Hotel Kaunas in the city centre, to a holiday home on the shores of Lake Lampėdis, Kaunas has plenty of choices. For the wildest party animal, Moxy in the city centre on Maironio Street is one of the most kaunastic picks. 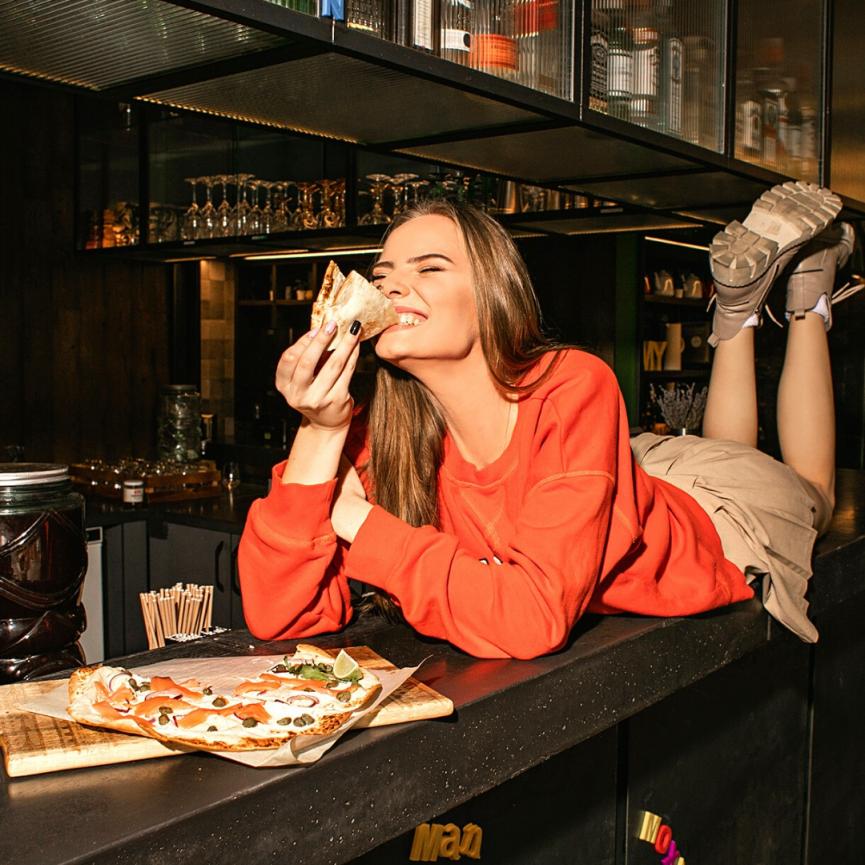