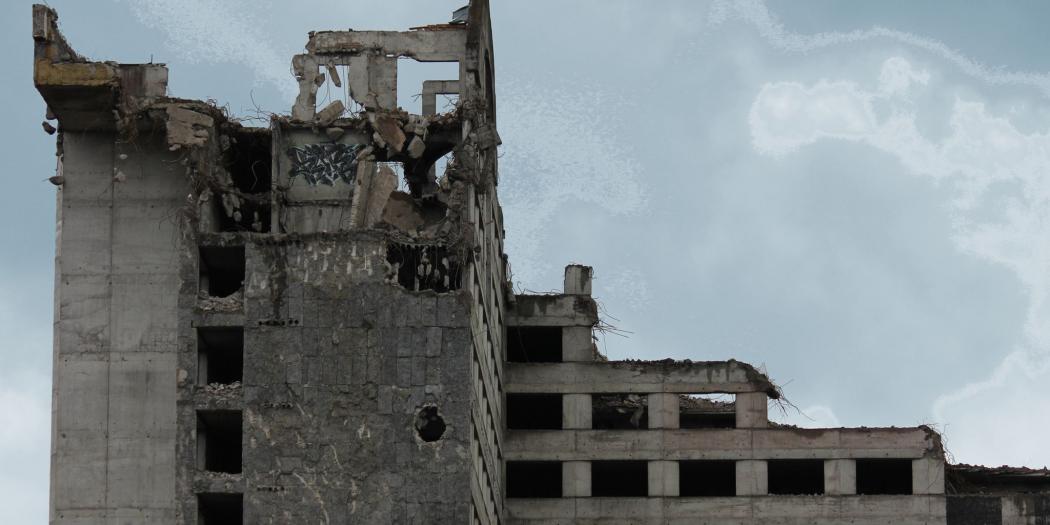 Cyborgs, robots, cybernetics, monsters, and techno-bodies. These keywords are probably, first and foremost, associated with the science fiction genre. However, in Matters, a platform for industrial culture at Kaunas – European Capital of Culture 2022, they encourage people to look at the phenomena surrounding us today. Kaunas Full of Culture magazine discussed with Daina Pupkevičiūtė and Gabrielė Gervickaitė – the curators of the symposium which will be the highlight of 2019 for Matters – how unusual terms can help us reflect the issues of ecology, accessibility or power balance and how it is all related to the industrial culture. 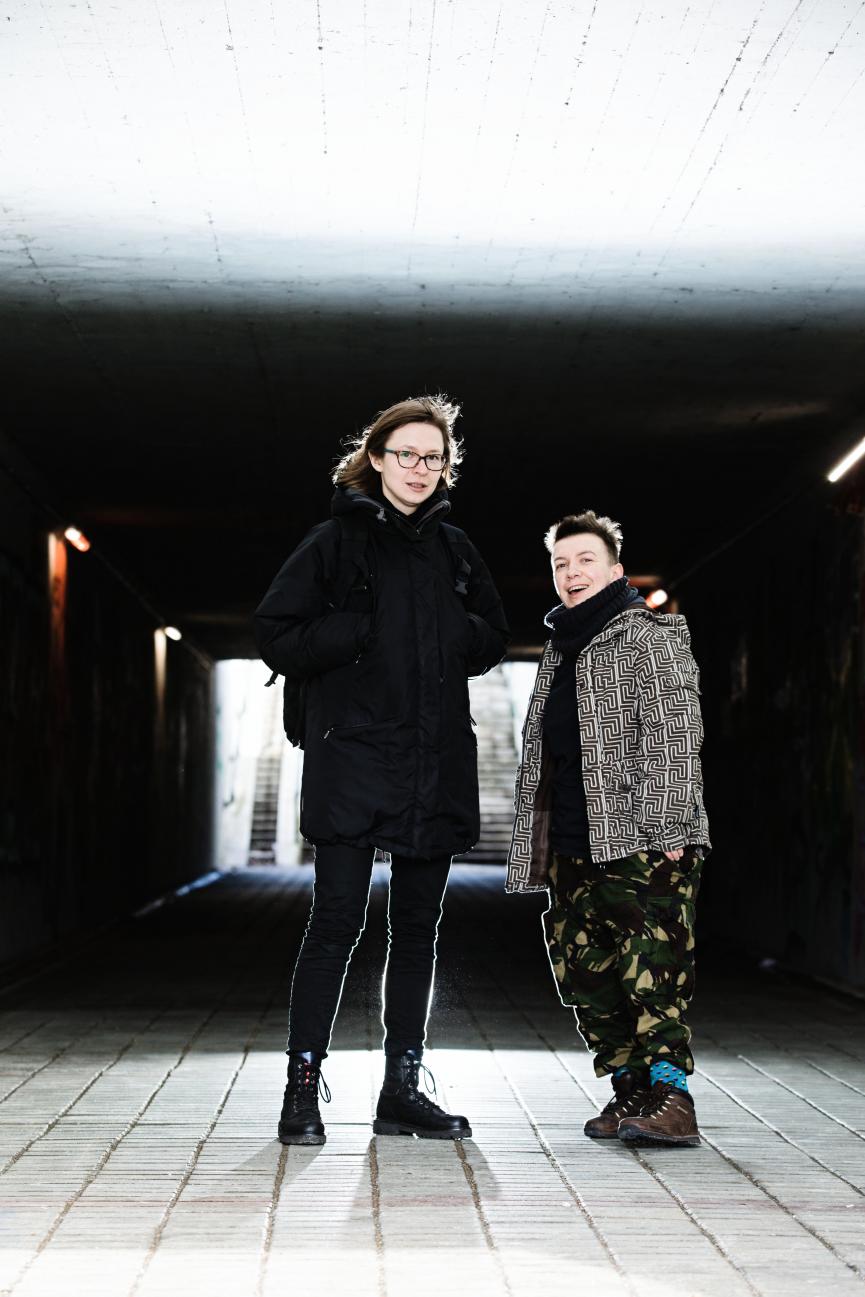 How is the industrial culture relevant to Kaunas right now?

Daina: For me, industrial culture seems to be important not just in the context of Kaunas, but rather in the context of a city in general. Not much of industry is left in cities these days – everything is cleaned up and moved to the periphery or the outskirts. But the industrial – or shall I say post-industrial – culture is as important as other countercultures. Although, I often ask myself how much of that ‘counter’ is possible in today's context when everything is being lent out and traded, and black metal is turned into fashion.

Looking at the origins of industrial culture in the 1980s, I think it was an important empowering medium. In the past, many industrial artists were political and would articulate their stance clearly. Now, both in visual arts and music, politics is being avoided. It seems to me that everything in the world is political; therefore the apolitical position of the artists or their alleged neutrality is not a positive phenomenon. Back in the day, industrial artists discussed the topics of power structures, control and surveillance, action and resistance. The field of industrial culture was characterised by a great deal of dialogue – the creators of sound, performance artists and poets worked together to find radical ways to talk about important things, like freedom.

I see the birth of industrial music in the first half of the last century, in the musique concrète and avant-garde scene, when together with technological change and the appearance of synthesisers, music production became available to a broader group of people. There was no need for music education to create something exciting and original. This inspired the birth of new genres. Industrial music emerged in the same field. Thus, accessibility has always been important for industrial culture. It is still relevant today, and industrial art can become one of the ways to talk about accessibility. Much of it is to do with do it yourself and do it together mentality. In industrial culture, it takes the shape of people creating their own record companies, publishing, concert organising, learning music technology and sound processing. It seems to me that the opportunity to do it yourself is one of the fundamental preconditions for human freedom, which we lack.

So, it seems to me that a medium that encourages critical being and seeks for a dialogue in a very monologue-like world of social media and cosy ego-bubbles, empowers and reminds us that freedom lies in the creation and not consumption, should be relevant in every city.

What issues are tackled by Matters program and what methods are used?

Daina: This is a platform where people from various fields can meet. I like to think about Matters as an open field of dialogue and creativity. People or non-humans meet, part, and share here, asking various questions, which could be attributed to industrial and post-industrial culture.
In recent years, there has been a severe lack of dialogue in the industrial culture. Post-industrial musical culture is branched, encompassing a variety of genres from dark ambient to techno, but it often does not transcend the limits of sound, and for me, personally, it lacks multidimensional contexts. On the Matters platform, I would like to start the interdisciplinary dialogue or to refine the existing one.

Matters was launched a little less than a year ago, in May 2018. What have you already done and what can be expected in 2019?

Daina: Three sound residences took place last year. I invited artists whose approach to the art of sound I found interesting. William ‘Bilwa’ Costa used the method of musique concrète and Brigitta Bödenauer studied the synthesis of sounds. We discovered Donia Jourabchi, who is working with resonances and feedbacks, during an open call. She explored all Kaunas forts. Each of the artists worked with the sounds of the city. They collected, processed, and synthesised them and early this year we released an album. It shows how sounds and understanding of the space surrounding us change based on human perception.

In 2019, we will not have any sound residences because each year I want to find new forms of dialogue. The plans include a couple of workshops and a symposium. One workshop will be dedicated to music programming, so we do not plan to abandon the sound, and the symposium should bring people from different fields for dialogue and experimentation.

What will the dialogue be and how it should take place during the symposium?

Daina: The first wave of industrial culture examined the human role in a fragmented and lonely society. Here, the focus is often on nihilism, which continues throughout the history of industrial culture until now. I like to ask why we see our culture as destructive and unattractive. Such questions bring me to the notions of ecology, posthumanism and capitalocene. The latter encourages us to think about how capitalist thinking is related to destruction and that everything we do has destructive power.

For this reason, we have added concrete to our keywords because it is a durable material and cannot be recycled. At best, concrete is used in other constructions, but some of it is simply discarded. In one form or another, this material remains, and human imprint on earth gets deeper.

At the symposium, we want to explore topics that question people and their role in the world. However, this research should take place without raising a person as the most important being, but asking why and how we do things, what is happening around us and in what forms we can be here. In this way, posthumanism, cyborgs, robots, monsters, and techno-bodies appear next to other symposium topics.

The dialogue should take an open, non-conference shape. I think there is too much expertise in our education when you get to hear one opinion without the opportunity to discuss. Our plans include an open fishbowl-type discussion with several scheduled presenters, but there is always one free spot. This place can be taken by anyone from the audience. When a new person joins the conversation, the other gets up from his/her seat, thus providing an opportunity for anyone else willing to participate. It is essential for us to create an environment where we can actually have a conversation, and everyone would be able to have a say. 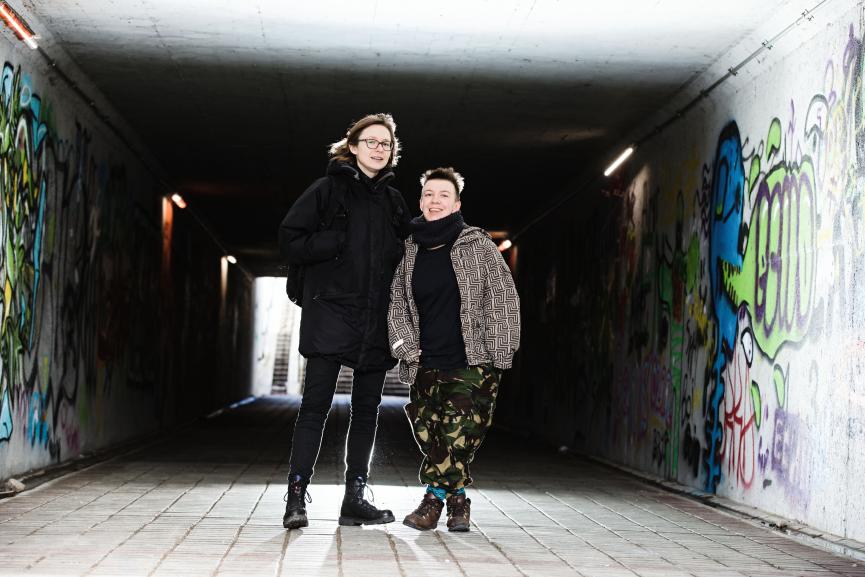 You both became the curators of Matters symposium, but you come from different art fields. Daina is a sound, video and performance artist as well as an organiser of Creature Live Art and Gabrielė is known as an interdisciplinary artist. How did Gabrielė become a curator of the symposium? How are both of your different artistic experiences useful to this work?

Daina: It seems to me that everything we do with others is much richer and more exciting and provides more food for thought. I like how Gabrielė creates and thinks. I saw her works for the first time when we participated in exhibition suniro in Leipzig in 2015. At first, I expected Gabrielė to join the symposium as a participant, but there were so many contact points in our field of interest that we decided to curate it together.

Gabrielė: Yes, the topics of the symposium were very close and important to me, so I decided to become a co-curator. I am delighted that people in Lithuania are increasingly talking about biopolitics and posthumanism, but very little attention is paid to phenomena like ecology. In the international context, universities have separate programs to study this field, and in Lithuania, you can expect individual lectures by visiting professors at best. I wanted to contribute to this symposium because it is a small step towards solving, discussing and publicising the problem. The event will invite international artists who know this topic well and find it important. Perhaps they will encourage Lithuanian society to look more closely at this issue.

Daina: Our different experiences are useful in bringing different people from different disciplines and attracting different audiences. Gabrielė is more familiar with the field of visual art, and I am more aware of the sound art field and people working in it. Of course, the analysing of these topics would be impossible without anthropologists and philosophers. I believe that art, to be worthy of anything, should be dialogical. My and Gabrielė’s qualifications allow us to include more than one branch of art in this project. In this way, the themes of the symposium are discussed in several disciplines.

The Matters platform will live for five years. What do you plan to achieve in this time frame?

Daina: I would like for industrial discourse to gain new impulses. It is crucial for me to try out and present the industrial potential in different forms: workshops, residences, concerts or discussion panels.

So far, we’ve talked about you as curators, but you're both actively working artists. Is your current creative activity related to topics covered by the Matters platform?

Gabrielė: Of course. Now, in my works, I deal with the connection between body and various foreign bodies, relationship with technology, political phenomena, and control mechanisms. This is closely related to the topics of techno-bodies, cyborgs, and posthumanism that are analysed in the symposium.

Daina: Currently I focus on the topics of sustainability, ecology, power, and community. I try to explore them in the fields of performance and sound art as well as anthropological studies. We live in times of crisis. Environmental problems and the emergence of the radical right in the political arena are breathing down our necks. I care about how people are able to start and maintain a dialogue in these times. I seek to explore ways to coexist, get together and maintain the power balance. I see this as an alternative to a scattered society that is frightened and helpless. These discourses are important in my personal work as well as in the Matters platform, which must become an open exchange space for researching these problems.

Questions by Justė Vyšniauskaitė for Kaunas Full of Culture magazine