The National Kaunas Drama Theatre is continually expanding the list of performances surtitled in English. Make sure to buy tickets well in advance!

We’re stoked to announce even more great performances at the National Kaunas Drama Theatre that now can be enjoyed by non-Lithuanian speakers. The theatre and its partners make an effort to provide English-language surtitles for some of the best-attended performances this spring. Here they are – see you at the theatre… 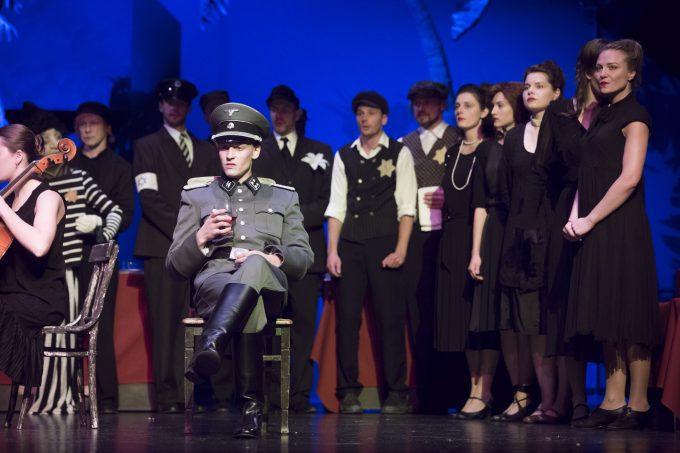 Ghetto,  a performance based on a play by Joshua Sobol, is the highlight of the current season at the National Kaunas Drama Theatre. Directed by Gintaras Varnas, one of the most awarded theatre directors in Lithuania. Ghetto clocks in at a whopping 3 hours 30 minutes (including intermission), but is far from elongated, thanks to a wide array of characters and the recurring concept of theatre-inside-a-theatre.   Israeli playwright Joshua Sobol first published Ghetto in 1984. The play focuses on the experiences of the Jews of the Vilna Ghetto during Nazi occupation in World War II, as well as the story of the Jewish theatre inside the ghetto. The theatre became the source of strength and resistance. It’s a story about a collective fight for survival, both physical and spiritual.

Interestingly, Sobol himself had not visited Vilnius before writing Ghetto. The play was also turned into a movie (director Andrius Juzėnas, 2005); the version of Varnas is the second interpretation of the performance in the Lithuanian Theatre. Varnas added a lot of documentary material to the work of Sobol. The production that premiered earlier this autumn is dedicated to the Centennial of the restored Lithuania and the 75th commemoration of the liquidation of Vilna Ghetto. 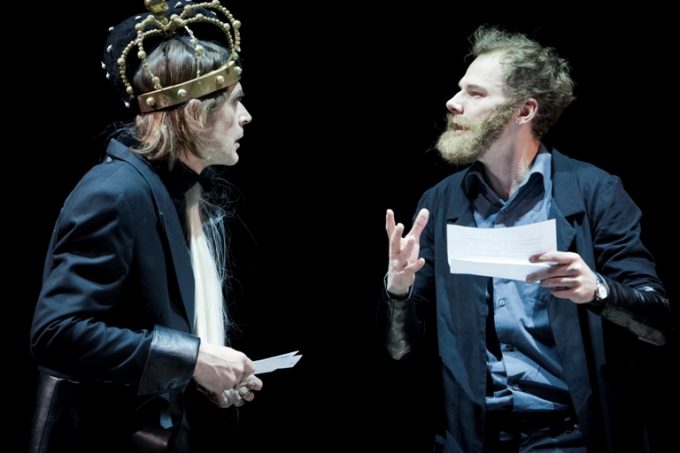 Many directors have tried to recreate Hamlet on stage; the play has become a synonym for the theatre. Each generation has a different answer to the question of existence. In the hands of young director Vidas Bareikis, Hamlet is neither a romantic hero nor an idealist. “I wanted the viewers to be able to answer the question of how to be”, says Bareikis. Vainius Sodeika, a young actor playing Hamlet, says this character is sort of a prize – and he was delighted to win the lottery. 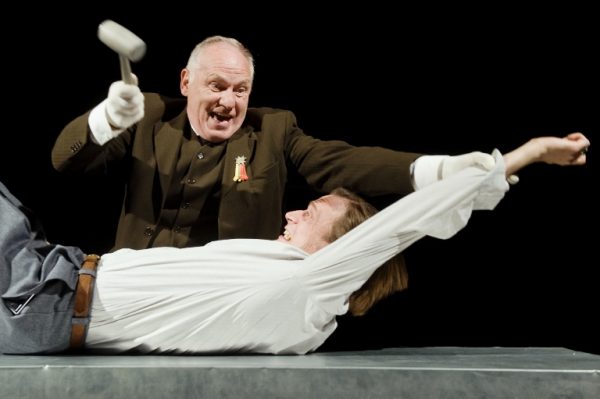 Directed by the legendary theatre artist Jonas Jurašas, The White Shroud is a dramatisation of a novel by an exodus writer Antanas Škėma (1910-1961). Number 87 takes down the elevator. Up and down. He is wandering through his cracky memories in places of the interwar Kaunas, High Panemunė and Vilnius. The 87th poet, Antanas Garšva, having no opportunity to vow to his creative work and achieve immortality of his soul, is forced to carry out a Sisyphean-like lift-operators work in the most prominent hotel in New York. His fragmented consciousness is haunted by homesickness, and sometimes images of women whom he loved. Garšva rejects love, ruptures human relationships, remains lonely in the cage of an elevator, but he still lives in the desire of hope fruition.

Garšva, as a cog in a vast machine, is recklessly looking for self-actualisation. He discards all his illusions and keeps to himself his poetry. However, a creative giddiness and desperate efforts to discover the truth brings suffering.

See The White Shroud on March 13. 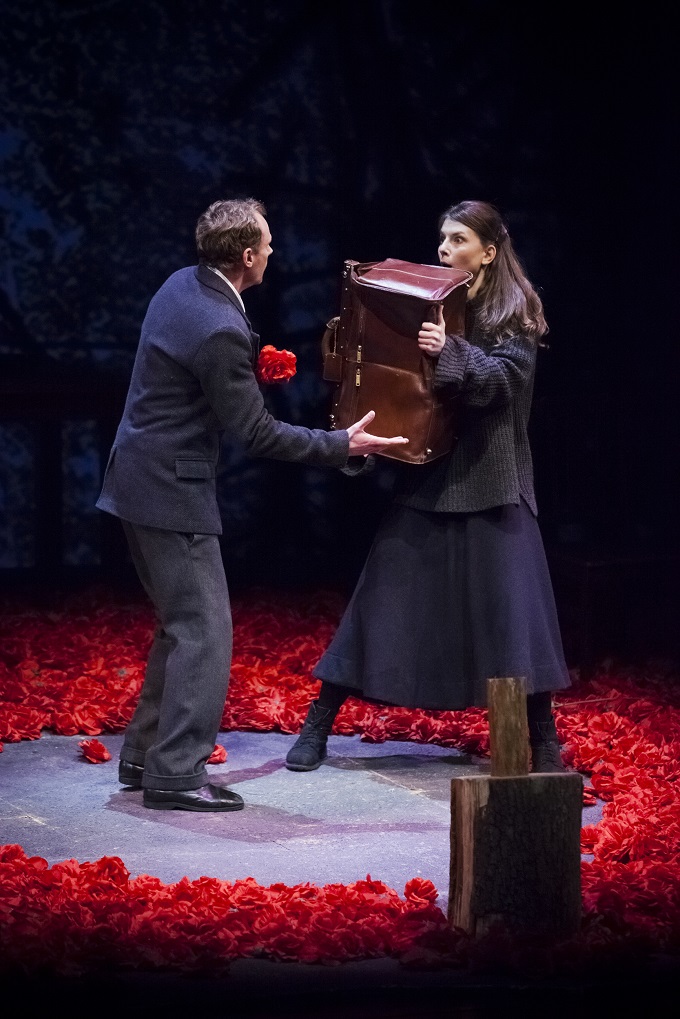 The Tribe is based on the novel Aukštujų Šimonių Likimas (Fate of Aukštieji Šimoniai) by Ieva Simonaitytė. It is a one-act play about Rose, the last surviving member of the Šimoniai family, which tells a story about her tribe and family. Like in the novel Fate of Aukštieji Šimoniai, the play includes many of the author’s autobiographic texts as well as her journalistic articles. Director Agnius Jankevičius chose the famous novel out of curiosity. Can a book that was written in 1935 live in the present? “I would like to know if this kind of an old-fashioned material, as well as the lexis, would reflect the text by Simonaitytė or the story itself in these modern times without serious post-modern interventions,” says the director.

See The Tribe on April 7 . 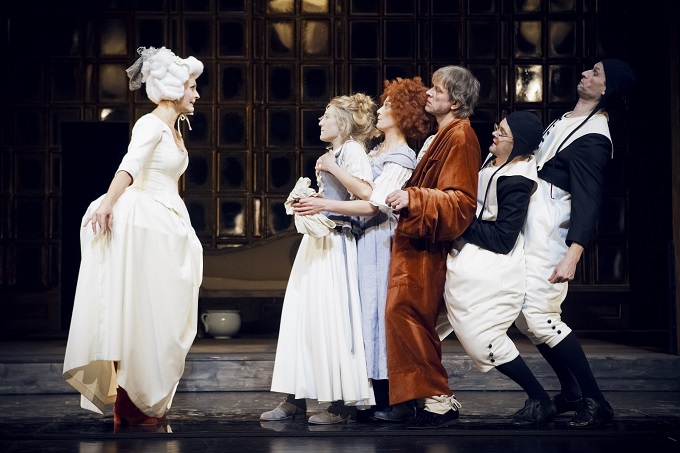 Director, playwright and actress Inesa Paliulytė rewrote The Imaginary Invalid, the last play of the great French comediographer, in a witty way and has relied on Moliére himself to be the central figure in the play. I – Moliére is a play full of captivating clownish elements, French farce, pastoral, and even operetta. Enchanting music, theatrical impromptu, humorous situations and intrigue will not allow the audience to relax even for a second. Mysterious and fragile nature of an actor is revealed here to take an unexpected turning point as a promise to a triumph of creativity and art. It is a lively, energetic story about stupidity and hypocrisy, love and courage. The great theatre invalid dies on the stage acting in his own play. Moliére is dead, long live Moliére! 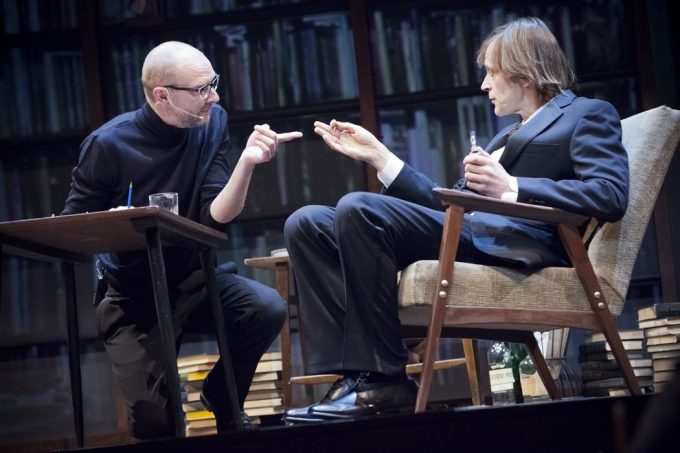 Directed by Gintaras Varnas, Biography: A Play Acting is a play in which the inevitability of destiny, variations of personal choices and a utopic desire to change a biography of private life are analysed. The surrealistic opportunity to realize life as a play on the stage and to change unpleasant or failed situations – what would happen if the Butterfly effect was real? This performance features absurd elements that exist in plays of F. Kafka’s The Trial where personal choices become an illusion because Destiny, God, Recorder always stands behind your back and cynically evaluates the life of a person as one more case in the Universe. A person who knows his destiny for 7 years ahead still makes particular mistakes, so the critical Human error is inevitable.

See Biography: A Play Acting on May 2.

To ensure the best visibility of the surtitles, the theatre highly recommends the seats above the 12th row. More information and tickets (we suggest you buy them well in advance as the theatre is one of the most popular cultural institutions in Kaunas): www.dramosteatras.lt/en.

All photos by Donatas Stankevičius.