Norwegian Digital Nomads in Kaunas - With a Dog!

Ninth Fort, gastronomic discoveries, a night out and beyond. 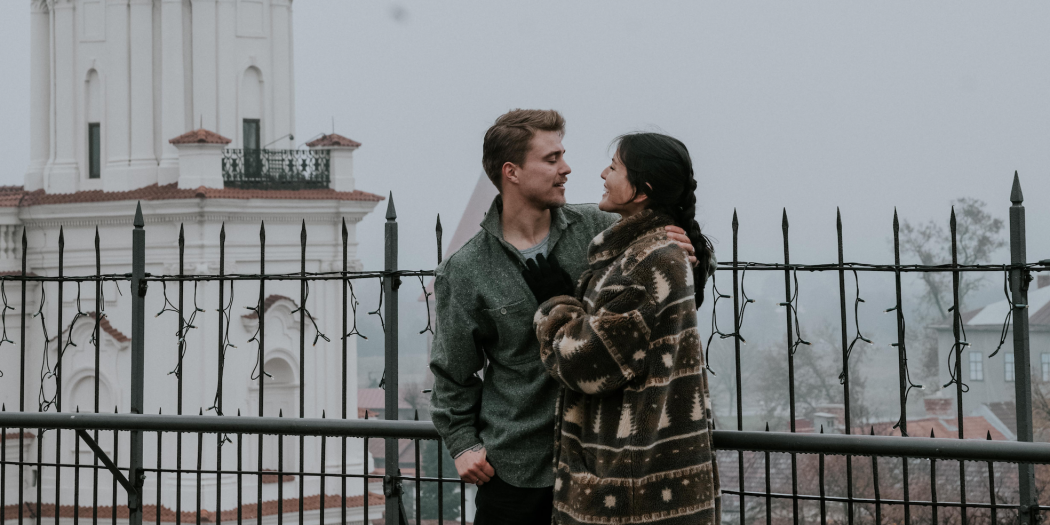 We met Norwegian travellers Ann Sylvia Deocariza and Georg Michaelis - as well as their cute dog Lola - right before the Christmas season in Kaunas. After a stop in our country, the digital nomads continued down South. The ultimate goal of their trip - it isn't exactly a holiday as our new friends work while they travel - is… India, and the couple are moving in their bright orange van. This kind of makes every stop their home. Isn’t that a dream come true for most wanderers? After doing a healthy dose of sightseeing and balancing it out with a few visits to some of the best restaurants and gastropubs in Kaunas, and right before a good night sleep in Hof Hotel, Ann Sylvia and Georg agreed to answer some questions about their kaunastic experience.

Is Lithuania a comfortable country for travelling in a van? Would you come back here in a van, or would you prefer other means of transport?

Lithuania is super convenient with a van, the roads are pretty good and the nature stunning. Finding camping spots are so easy as there are a lot of "hidden" roads that lead to beautiful woods and lakes. So we would absolutely come back with the van if we were coming back! 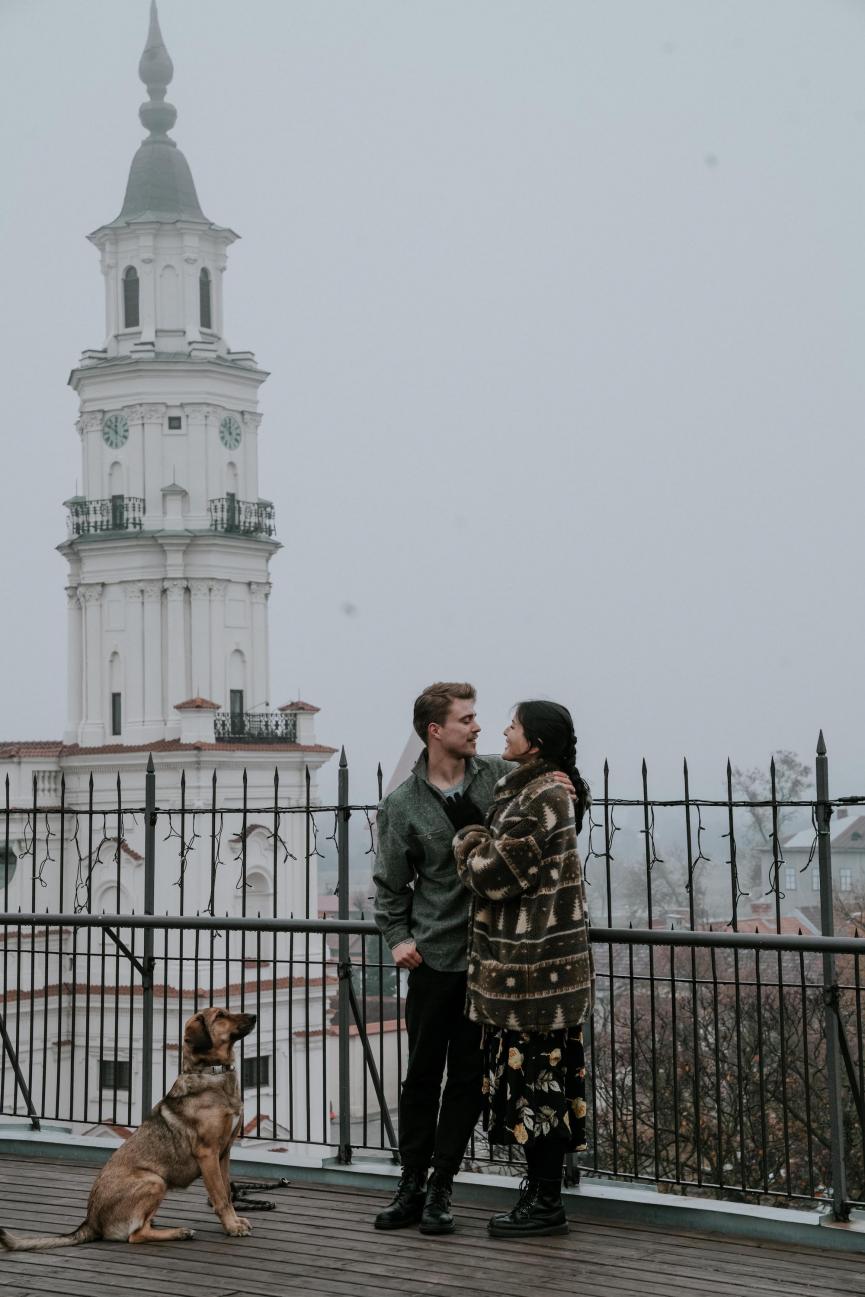 The terrace of the St. Francis the Xavier Church is the best spot for romantic selfies. Picture by @bloured

You’re also travelling with a dog which is amazing! How did Kaunas treat your little friend?

It was very easy to have Lola (our dog) with us to Kaunas, she was allowed into almost all places, and people are generally pretty positive towards dogs compared to some of the other countries we have visited. There are lots of parks and green spots in the city centre for the dogs to play in, which is great. 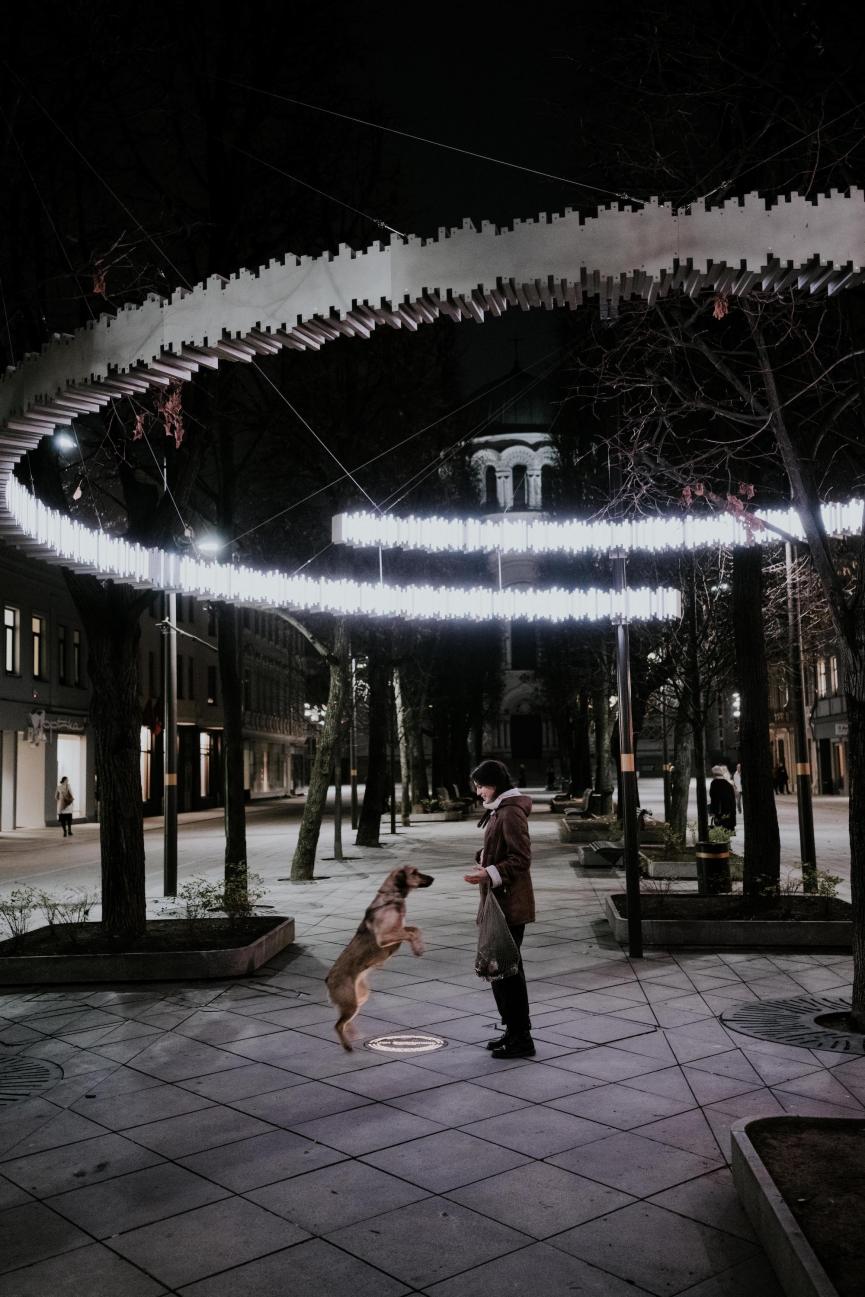 As you did quite a bit of sightseeing, we’d like to know which locations were the most interesting for you? Maybe not just for good pictures, but generally? Perhaps you made some essential historical discoveries?

We really liked the Ninth Fort! It has this exciting and triggering atmosphere and almost feels haunted. We had a private tour there, and since the weather was so foggy, there were no other people there. So we ended up running through the corridors, talking about historical events and just chatting about the place for hours. It was awesome. Also, the outside of the Ninth Fort is super photogenic, so we ended the tour with a really nice photo session. 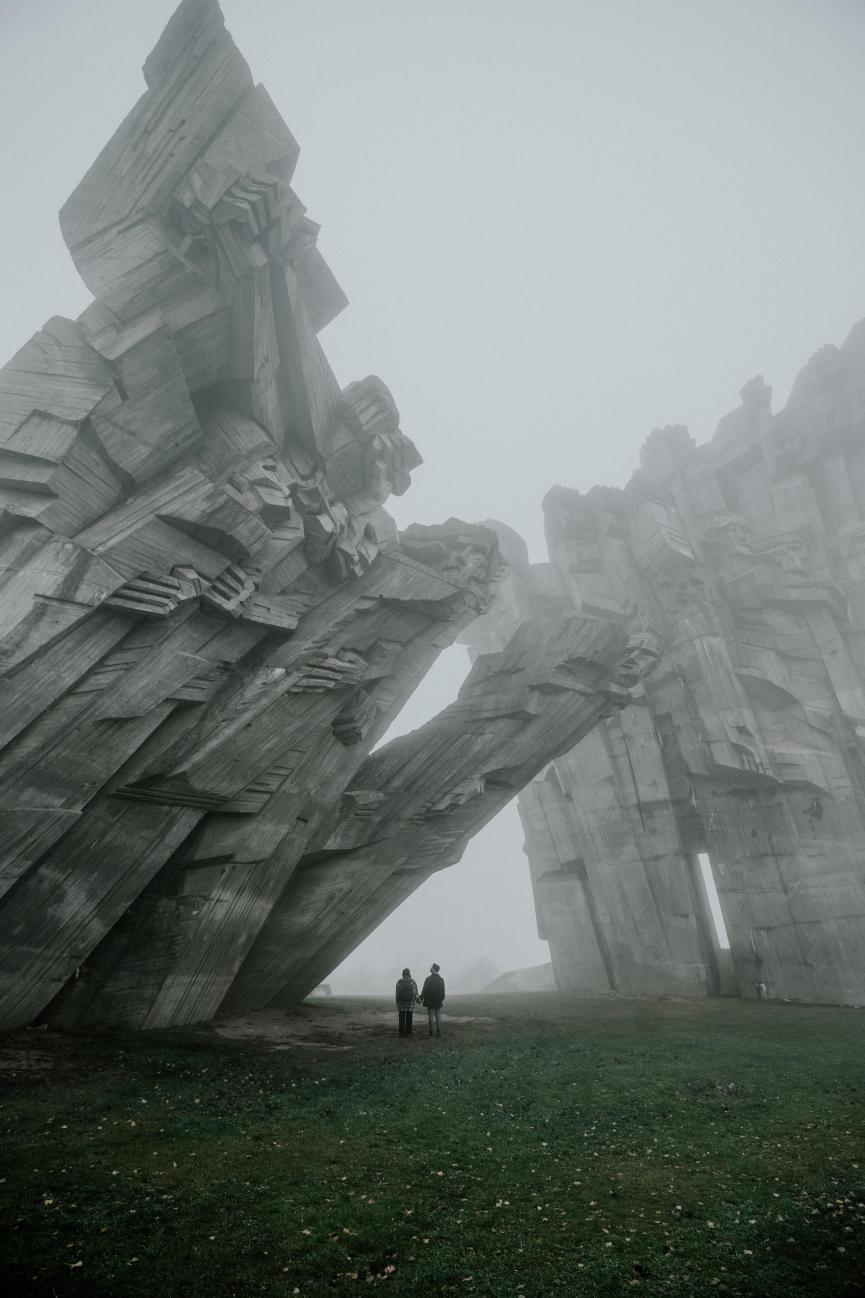 Which is the most Instagram-friendly place in Kaunas?

The Old Town! So many cute corners and lovely architecture.

You’ve travelled a lot, so maybe there is a city in the world you would say is similar to Kaunas with its vibe?

Kaunas is very special, but it bears similarities with Gdansk. They are both are indeed historical cities, have rivers, somewhat similar architecture and great nightlife and vibe. The streets in both cities are filled with people and the prices for food are good. 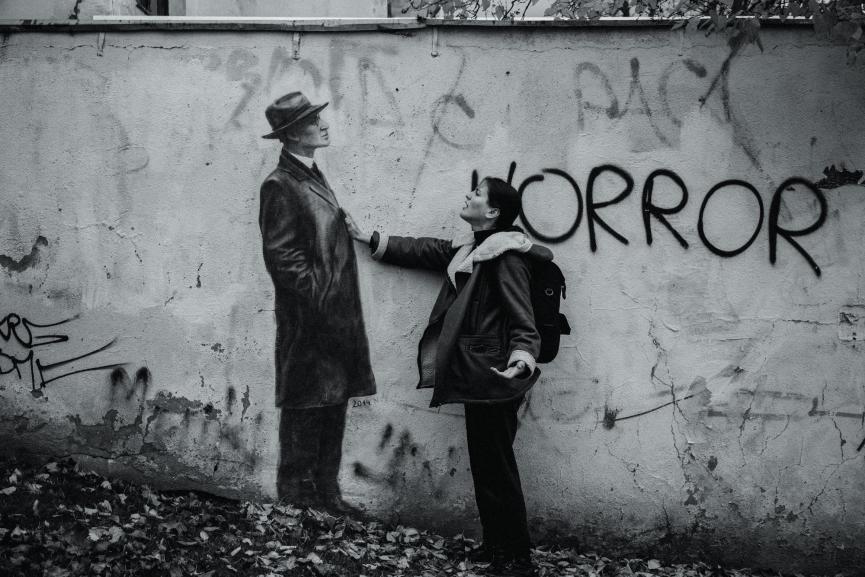 This street art gentleman can be found at the Kaunas Artists' House. Picture by @bloured

What about Kaunas nightlife? Was it busy enough for you on a Friday night? What were the highlights of your night out?

Our night out in Kaunas was really fun! People go out to have a drink, dance and talk with people - which is precisely what we were looking for. The beer is cheap, and the Lithuanian people are very generous. 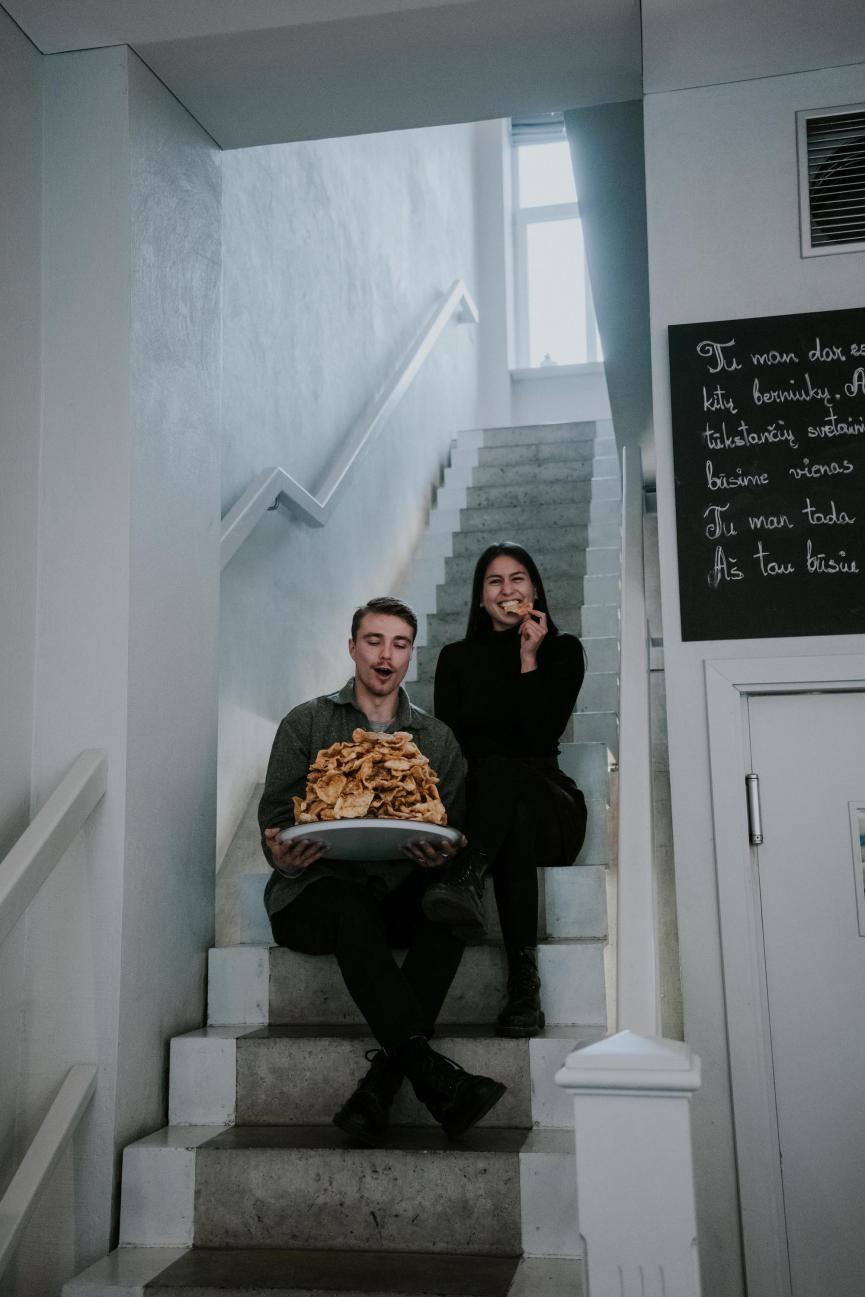 Višta Puode is THE spot to trie the honey-and-dough Lithuanian delicacy also known as the ant house. Picture by @bloured

Which gastronomic stops in Kaunas would you recommend for our readers?

We really recommend going to Sushi Masters if in Kaunas. They don’t serve traditional “boring” sushi but serves it in a way that will make your taste buds dance after another bite. We had our sushi served one piece at a time, and each piece was carefully assembled by a highly skilled chef. If you don’t like fish and want to try some traditionally inspired food, we would recommend Ieti. The food was supreme, and the place has such a cosy vibe. We loved our waiter so much and really had a great time at that restaurant. It’s also situated in a charming part of town.

Three words that would best describe your stay in Kaunas?