On our way to UNESCO: Inspired by the Modern Movement

As of 2020, the modernist architecture of Kaunas is part of the UNESCO tentative list, and the dedicated team is working hard on the final bid which is to be presented later this year. 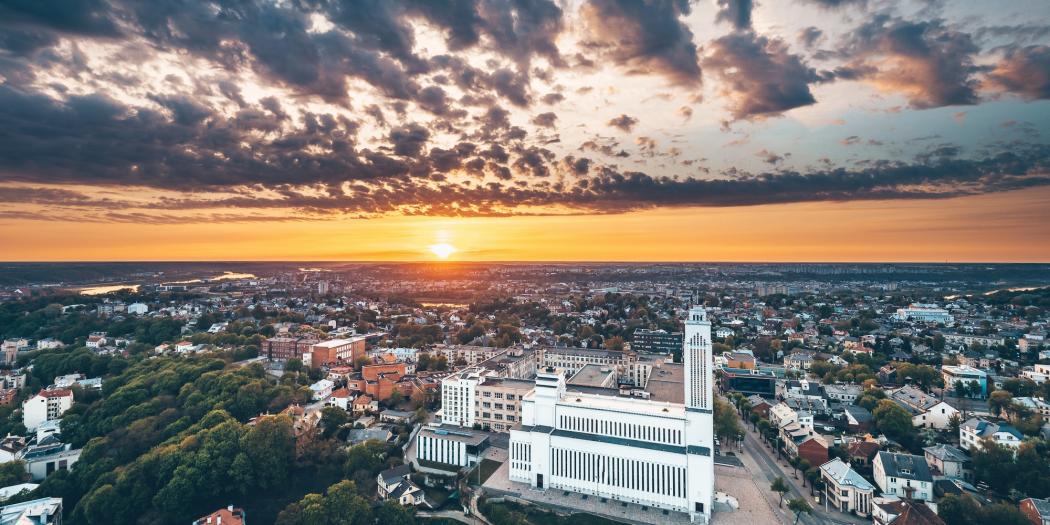 As of 2020, the modernist architecture of Kaunas is part of the UNESCO tentative list, and the dedicated team is working hard on the final bid which is to be presented later this year. Architecture historians and specialists, both local and foreign, agree we do have a gem of an urban carpet here in Kaunas. So, while waiting for the final decision, whether we’ll be included to the UNESCO World Heritage List, here is the main idea of our bid.

Kaunas 1919-1939: The Capital Inspired by the Modern Movement

During the period 1918 to 1940, Lithuania was one of the newly restored states that had formed in Central and Eastern Europe on a national-territorial basis after the First World War. Vilnius, its historic capital, had been lost in 1919, and Kaunas became the new capital city. Formerly a modest Imperial Russian garrison town, it suddenly acquired a new importance on the map of Europe. Its status as capital provided an impulse to accelerate its integration into the political, social and cultural context of interwar Europe, through material and non-material forms, such as architecture, diplomacy, culture and education.

During a short but very intense period, Kaunas lived through the most important phase in its historical development. The years from 1919 to 1939 were a time of revolutionary cultural breakthroughs for Kaunas, which was especially evident in architecture. Its status as a capital city provoked a huge construction boom, aiming to create all the necessary infrastructure: government institutions, museums, educational institutions (a university, academies and schools), business offices, hotels, industrial premises, housing, and the general infrastructure of the city (water supplies, the sewerage system, a new transport system, roads and parks). The architectural landscape of multicultural Kaunas was enriched by the buildings of various ethnic communities, such as churches, banks and schools, with distinctive forms of expression (in 1937 the population of the city was 61% Lithuanian, 25.5% Jewish, 3.9% Polish, 3.3% German, and 3.3% Russian). In 1938, it attracted 68% of all Lithuanian investment in the construction of towns and cities. The area of the city expanded more than seven times (from 557 hectares in 1919 to 3,940 hectares in 1939). More than 6,000 buildings from this period have survived till today. 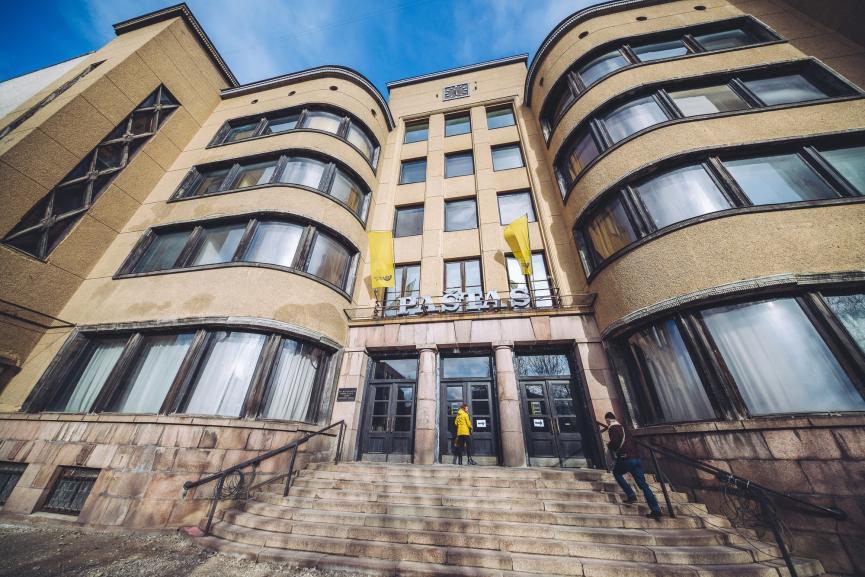 Vytautas the Great War Museum. Photo by A. Aleksandravičius 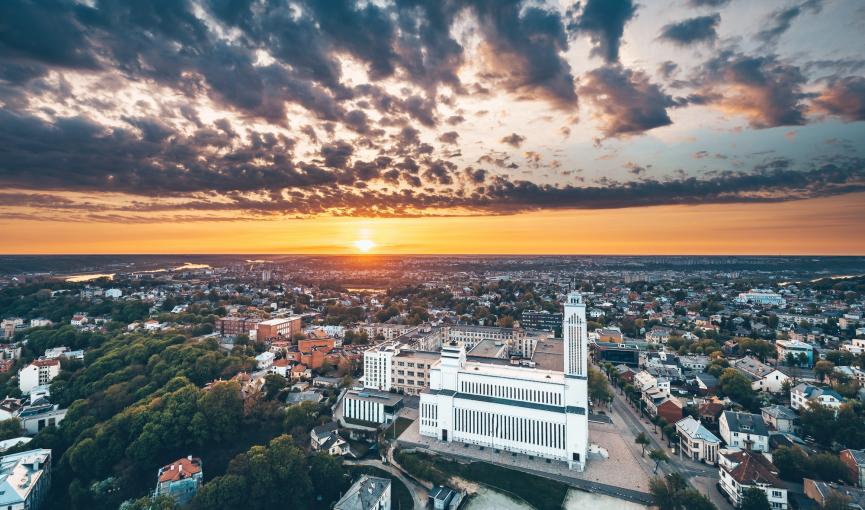 For political and economic reasons, the main construction work in Kaunas lasted less than two decades. The most intense period of construction was from 1927 to 1940. This corresponds with huge changes in architecture. In the 1930s, in a very short period of time, Modernism became the international style. The revolutionary seeds sown by Le Corbusier, Walter Gropius, Mies van der Rohe, and other world-class architects and schools of architecture, found fertile soil in thousands of places all around the world. Modernism is expressed in different local architectural languages. The urban and architectural development of Kaunas during the 1930s is one the most significant manifestations of the early stage of the Modern Movement, where the style is represented not as a distinct urban and architectural monument, but as a place inspired by the Modern Movement.

The limited financial means of this small East European state predetermined not the revolutionary but the evolutionary character of its architectural and urban development. The need for a public face for the capital, and the inspiration of the modern world (cleanliness, hygiene and social infrastructure), in Kaunas correspond with the delicate scale, the careful adaptation of the 19th-century urban grid, and the creative use of the natural environment (for example, one of the most distinctive urban features of Kaunas is the Resurrection Church, which was constructed at the top of the slope surrounding the city, as if illustrating the concept of Stadtkrone, the City Crown, formulated by the renowned German architect Bruno Taut). Therefore, Kaunas can be characterised by its small scale and disparateness, rather than by clear functional zones, by the consistent development of the townscape, rather than by dramatic restructuring, and by the development of the local character and topographical elements, rather than by a clearly recognisable Bauhaus architectural look (Functionalism).

The generation of architects who were educated in Western Europe, and graduates of the University of Lithuania (Vytautas Magnus University from 1930), brought international ideas, but they expressed them in a different way compared to the classic concepts of “heroic modernism”. The architectural style of Kaunas reflects various stylistic tendencies of the interwar period, and expresses a general tendency towards the steady evolution from Eclecticism to Modernism. This architecture was defined accurately by Vytautas Landsbergis-Žemkalnis, one of the most famous architects of the period, as “a classical rhythm of monumental construction in a modern form”. However, the intimate scale and the organic incorporation of elements of national art ensure the distinctive local architectural character of these buildings.

In contrast with radical schools of Modernism, Kaunas developed in a consistent and continuous way, gaining a form of aesthetic expression that was close to international Functionalism, but still based on its unique local character. The Lithuanian cultural memory and experience were used to encourage modern forms and new architectural quality, so that the past took on an active function and led to the future. This slow everyday evolution, avoiding strong cultural and urban shifts and perceived signs, provides an example of urban sustainability, before the actual concept of sustainable development arose. As a result, the influences of national traditions, the human scale and close relations with the existing environment gradually formed the local school of Modernism, and made the city one of the earliest examples of regionalism in the history of the Modern Movement. The distinct stylistic expression, the well-preserved urban character and the historical uniqueness associated with the development of the capital, give a chance for Kaunas to represent the diversity of manifestations of the Modern Movement in its early stages in the 1930s. 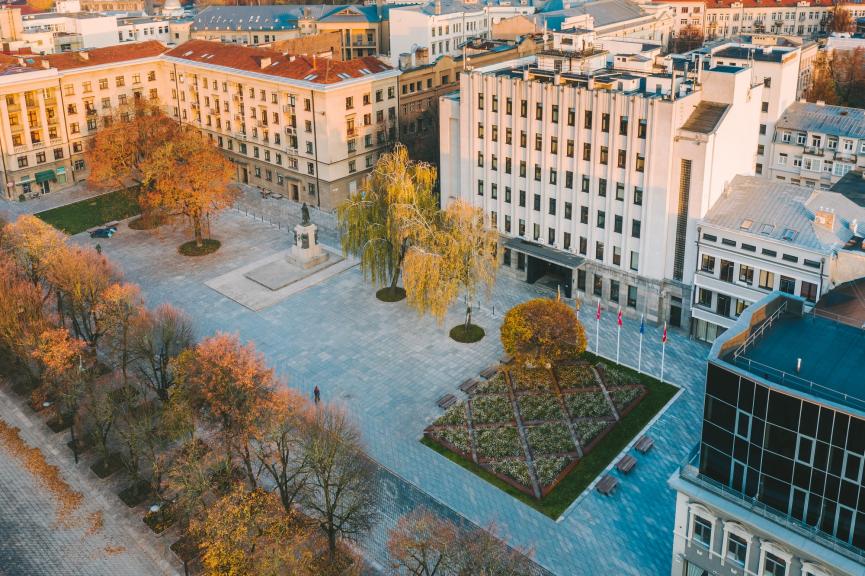 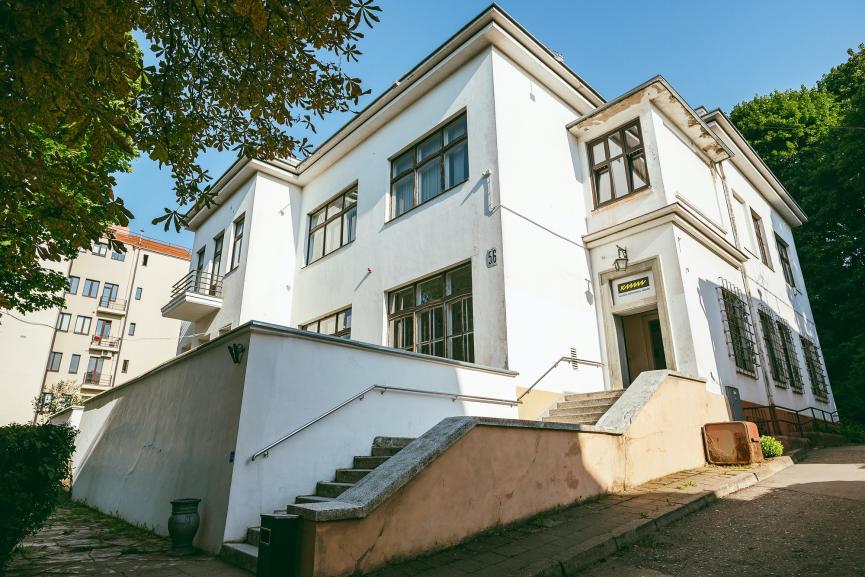 A villa designed for Vatican nunciature never became one. It is now Kaunas Artists' House. Kaunas Photo by A. Aleksandravičius 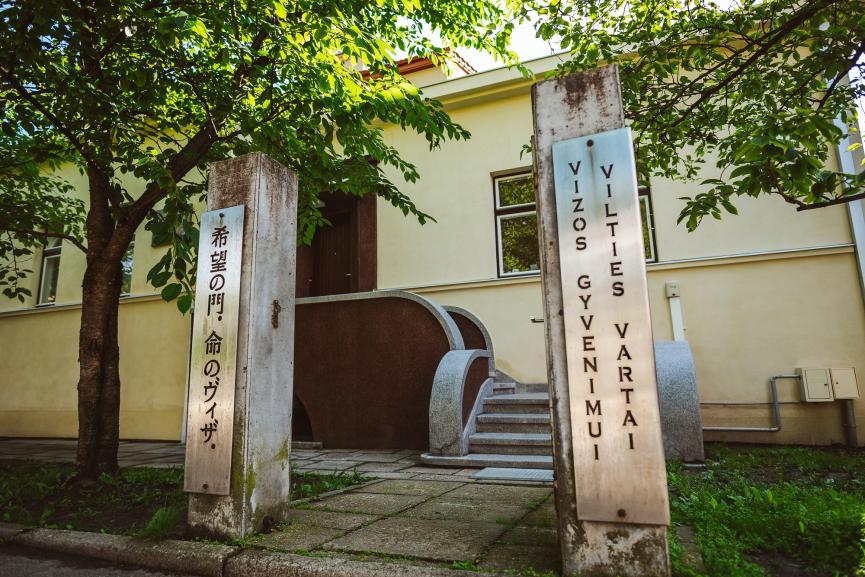 Villa and office of Japanese consul Chiune Sugihara, today an interesting museum. Photo by A. Aleksandravičius

The urban fabric of Kaunas’ central area contains all the elements necessary to transmit the phenomenon of Kaunas Modernist architecture as a unique piece of the tangible heritage, driven by the intangible aspirations of a young capital city. Visual relationships, panoramas, open spaces, topography, the urban grid (large quarters from the 19th century, and Modern Movement infills) have a certain degree of authenticity, and are protected by national law. The nomination area, the New Town (Naujamiestis) of Kaunas, consists of different historical layers. This is visually and spiritually an integral part of the historic city that has clearly distinguishable marks from several periods: the Russian Empire (1854-1918), the Republic of Lithuania (1919-1940), the Soviet period (1945-1990), and contemporary additions. Nevertheless, the urban layout from the earliest period survives, and architecture from 1919 to 1940 dominates the area, both in quantity (42% of the area), and quality (most of the urban landmarks in the area are from 1919 to 1940). The buffer zone consists of many other less authentic, integral or important interwar-period buildings and groups of buildings, which help to maintain the character of the city.

The area of the property consists of many single buildings and groups of buildings that embody the architectural and urban character of a modern capital. The level of authenticity of their expressive stylistic forms, and the variety of functions and materials, is high. Some important public buildings have preserved their interiors almost intact: the Central Post Office, the Officers’ Club, the Bank of Lithuania, the former Bank of Agriculture, and others. Even their adaptation to new technical requirements has retained the spirit of the times: the former Post Office Savings Bank, the former Ministry of Justice, the former Kaunas County Municipality, and others. These buildings give us an exceptional possibility to learn about the diversity of public life in interwar Kaunas. The residential areas and residential buildings in the site represent a variety of urban lifestyles: modern apartments on a large scale, exceptional examples of mid-size rented apartments for four to six families, and luxurious modern houses for one or two families. Most of the housing of the site has preserved its authentic material form, and stands as attributes giving information about form, materials and urban living traditions in the interwar period, and contributes substantially to the genius loci of Kaunas.

Unlike other cities that are famous for their Modernism (Asmara, Tel Aviv, Gdynia, and others), Kaunas’ Modernism is distinguished by its local character, rather than as a continuation of the Bauhaus tradition. During Soviet times, the distinctive spirit of the city remained, as a spatial symbol of resistance. Consequently, Kaunas is a unique example of the delicate status of small-nation statehood in the early 20th century, in a particular geo-cultural area, as well as being an example of an attempt to express an architectural identity based on the universal principles of Modernism.

Find the submitted proposal and the original text here