For the first time in the history of Independent Lithuania, 23 Lithuanian diplomatic missions scattered around the globe are sending a united greeting to the world. 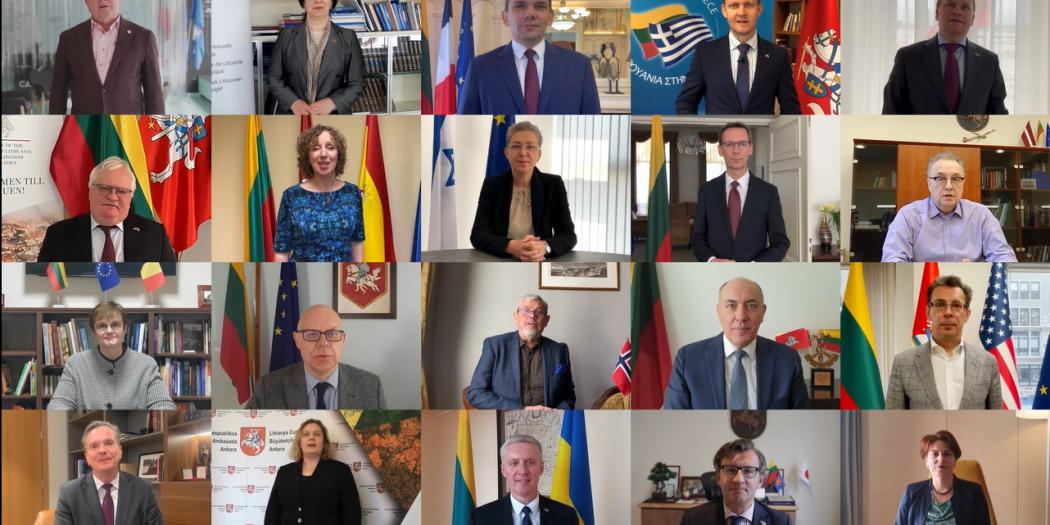 On Europe Day, the doors of the EU institutions in Brussels, Luxembourg and Strasbourg are usually opened for visitors, and European values are promoted to the public with a wide range of events across Europe.

Although this year, on May 9, we can greet each other only through the screens, this is not an obstacle to be glad that Lithuania is a culturally rich part of the European family, – in a joint greeting say Lithuanian ambassadors spread all over the world and those working in Lithuania.

For the first time in the history of Independent Lithuania, 23 Lithuanian diplomatic missions scattered around the globe are sending a united greeting to the world, reminding that without culture there is no democracy, and without democracy, there is no freedom. Greetings on Europe Day are sent by the heads of Lithuanian missions: ambassadors, consuls general in France, Germany, Greece, the Netherlands, Ukraine, Belgium and Luxembourg, the Kingdom of Spain, Japan, the United States, China, Israel, Turkey, Moldova, Romania, Latvia, Russia and its Kaliningrad region, the United Kingdom, Norway, Finland, Sweden.

The Minister of Culture of the Republic of Lithuania Simonas Kairys, the Mayor of Kaunas Visvaldas Matijošaitis and the Director of Kaunas – European Capital of Culture 2022 Virginija Vitkienė also joined the greetings to the world.

Wishing us to be proud to be the part of the united European family, they invite us to stay creative and remind us that after enduring this period we will be able to celebrate Europe Day next year throughout the year with events in Kaunas, which will become the main meeting place of continent’s culture.