The “Confluence” Effect in Kaunas: thousands of people gathered in the city

How many ways are there to celebrate life? “Confluence”, the second act of the Contemporary Kaunas Myth Trilogy, flooded the city with a multifaceted programme, showing that there are just as many of us. Every resident or guest of the European Capital of Culture created their own celebration formula this weekend. From a dinner table on Laisvės Alėja to wild dances on Town Hall Square, from the question-raising contemporary art in unexpected spaces to the heart- and body-soothing traditional sauna rituals by the river. From the feverish game of Kaunas Beast, which was even more involving than in January, to quiet pauses in art oases or a selfie after climbing the observation tower erected at the confluence of the Nemunas and the Neris rivers just for this weekend. “Confluence”, an international cultural festival, was by far the most colourful and eventful celebration to ever hit Kaunas. It is estimated that more than several hundred thousand culture and art seekers attended the events in these days, while performances were created by over 1000 singers, acrobats and actors. 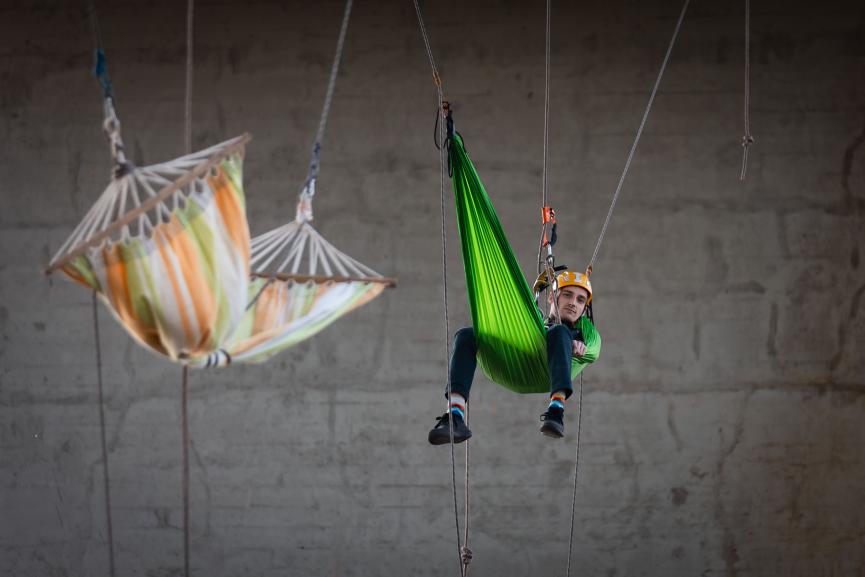 After celebrating the fifth edition of the Courtyard Festival on Friday in the central axis of Kaunas, Laisvės Alėja, on Saturday, the main action of “Confluence” moved to the Old Town and other parts of the city. From the morning onwards, orange balls were bouncing in the “Beast of the Street” tournament by the House of Basketball, while the sauna brothers gathered by the Neris River to set up their fires and prepare for talks on healthier living. 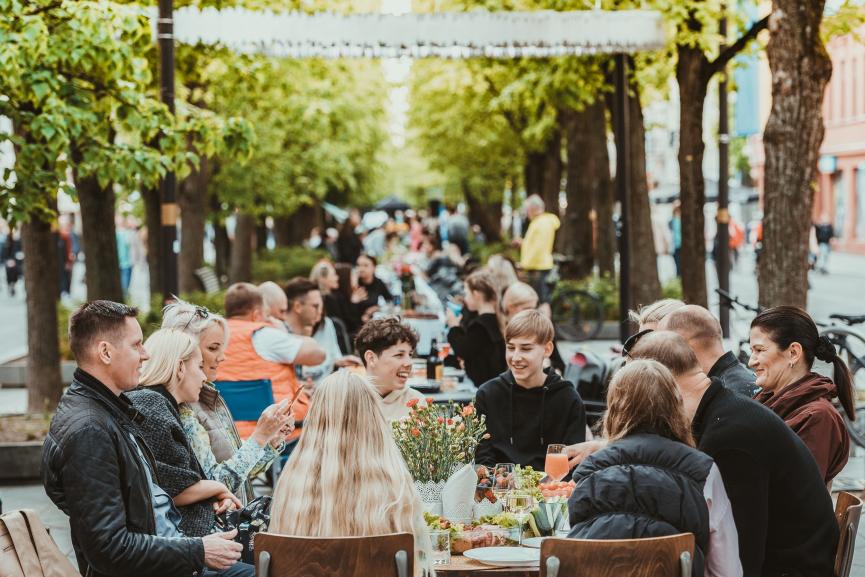 By midday, the most impatient had already dived into three themed mazes set up by Catalan Espectacle Spectacular. The labyrinths required a lot of wandering and head-turning to get through. The reward for successfully solving the puzzles were the performances presented by Kaunas State Puppet Theatre for the Kaunas Puppet 22 International Festival or the incense people could make themselves in the town of creative experiences. Of course, one could also bargain for souvenirs from the traditional fair dedicated to Kaunas’ birthday, which, like the Courtyard Festival, this year was attended by participants from Ukraine and other countries. 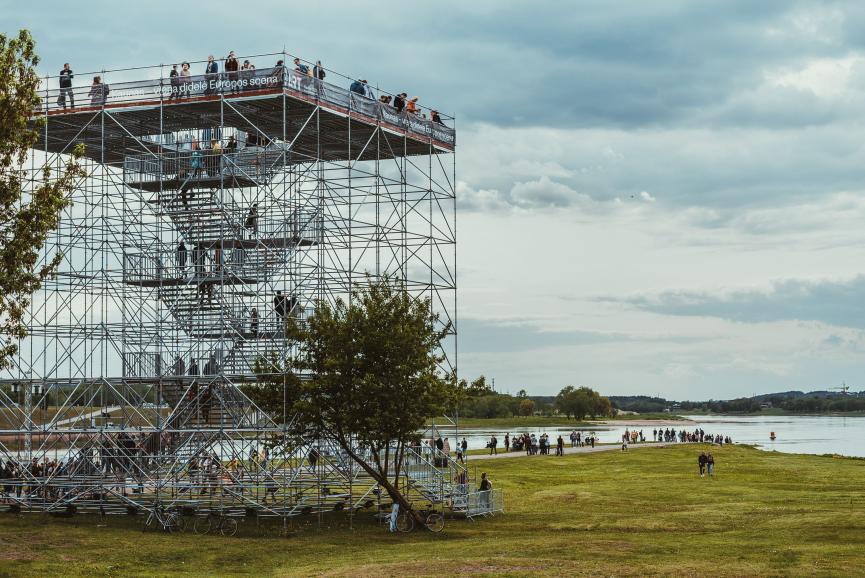 The French acrobatic troupe Cie Basinga gave an extraordinary, breathtaking show to those gathered at Kaunas Castle. The artist walked on a 230-metre long rope seemingly carefree and was greeted with an ovation for such tricks as a split or a headstand and other incredible movements that have been polished for years, ten metres above the ground. Fifty Kaunas 2022 volunteers worked together to make this performance, accompanied by fantastic live music, a success, creating the rope tension needed for a perfect show. 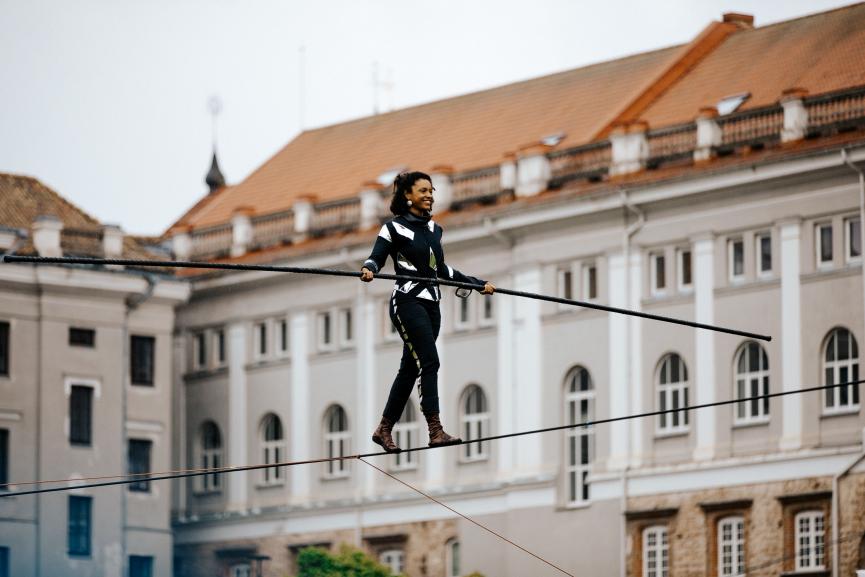 The initiative “Let's Celebrate the River”, which offered two cultural routes on the Neris and the Nemunas, invited people to discover unity in water. Cultural stops and co-created works of art awaited the inventively dressed, birthday-themed river-goers. “I would say that such routes should exist not only on the city’s birthday but permanently - that is, when travelling on the river by kayak or raft, you always want to visit an unexpected place or event, so I would vote for permanent art stops along the rivers,” commented a participant later after having completed the section on the Nemunas River starting from Petrašiūnai. 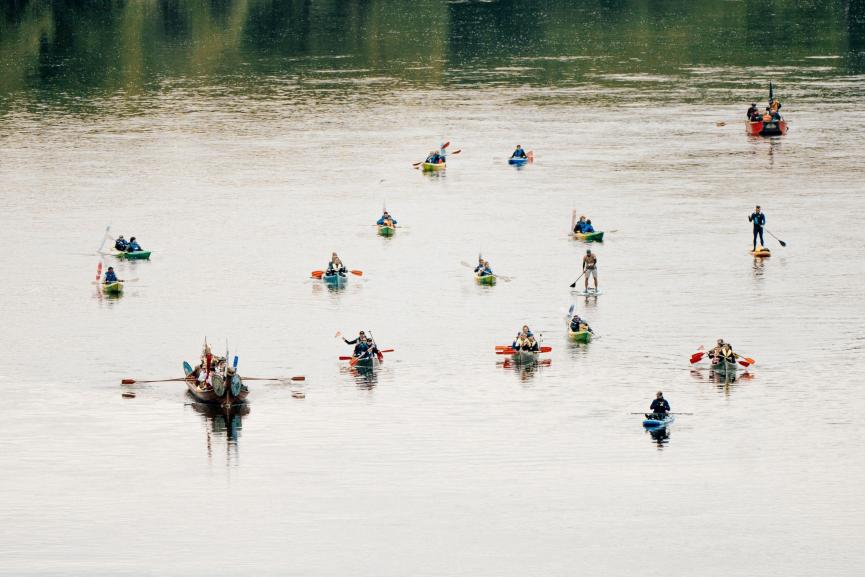 Music lovers also received some outstanding gifts - concerts by popular and emerging artists on two stages. On Friday, Justinas Jarutis, Saulės kliošas and Monique greeted everyone in Santaka Park, while on Saturday, Sisters on Wire, GJan and Saulius Prūsaitis took over the main stage. The Kaunas 2022 Summer Stage, which has just been set up in the Town Hall Square, was full of foreign guests, including LÜCY from Taiwan, Bratri from the Czech Republic and Musica Vitae from Sweden. The most interesting Lithuanian artists and performers - Kristijonas Ribaitis, shishi, or Baltic Balkan, who created a massive party after the main “Confluence” show - also performed on the stage that will remain in the square until autumn.

As darkness fell, miraculously - or maybe with the tail wagging the Beast of Kaunas? - the rain stopped, and tens of thousands of spectators flocked to the confluence of the Nemunas and Neris rivers, unwilling to miss the second act of the Contemporary Kaunas Myth trilogy. The show transformed the father of the rivers into a giant stage. The stars of the show were not only the musicians including the Ukrainian Jamala, who stunned with her fiery performance, Giedrė and Jessica Shy, Linas Adomaitis, Beissoul & Einius, Algirdas Kaušpėdas, ROYCE but also canoeists, windsurfers, aqua-acrobats and everyone else attracted to water as the most alluring element. 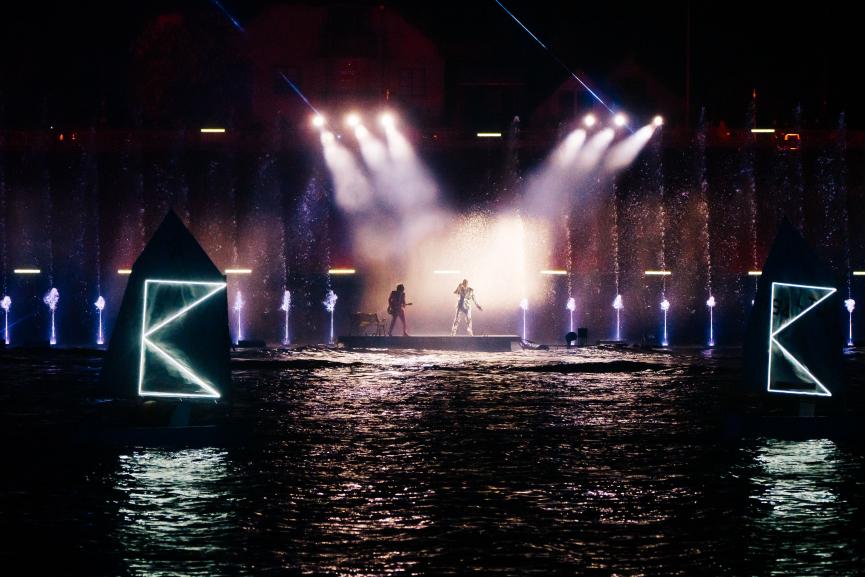 The actor Dainius Svobonas navigated the audience’s eyes, ears, and souls with his questions right up to the show’s climax, which once again reminded the whole world that Kaunas is not only the centre of Lithuania but also of European culture. Kaunas is a living organism whose heart beats strongest at the confluence of the Nemunas and Neris rivers, the mythical birth point of the city. “We are capable of more than we think” - with this statement, Svobonas led the crowd of thousands to continue experiencing “Confluence” and celebrating the art and culture that will help build the city together beyond 2022. 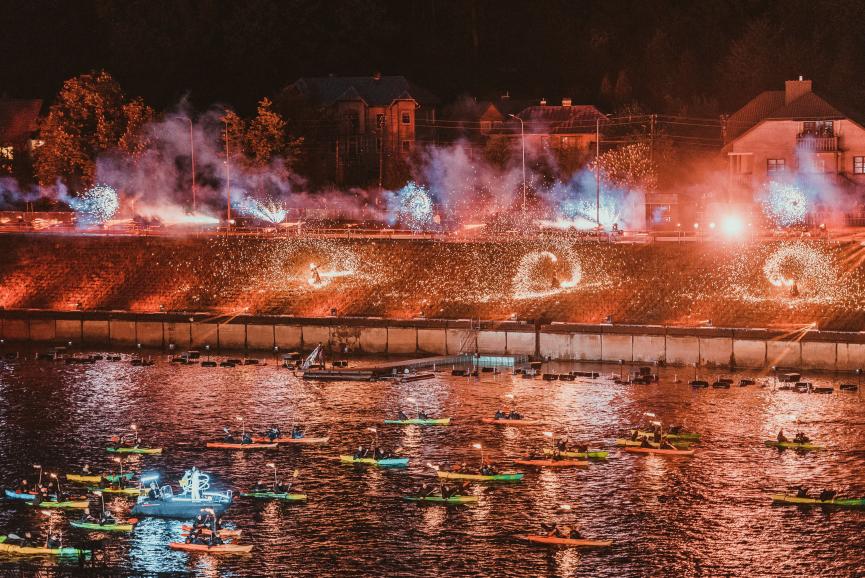 The fastest ones rushed upstream - back to the centre of Kaunas, to the Nemunas Island, where the quickest unveiling of a sculpture in history took place at midnight. Spotlights welcomed the Beast of Kaunas, who finally appeared, showing off his glowing body, and who can now be visited by all who wish. Another new attraction - the tooth of the Beast of Kaunas discovered by ceramicist Remigijus Sederevičius - awaits near the Kaunas Castle. It is said to bring good luck to those who see it and show it to others. 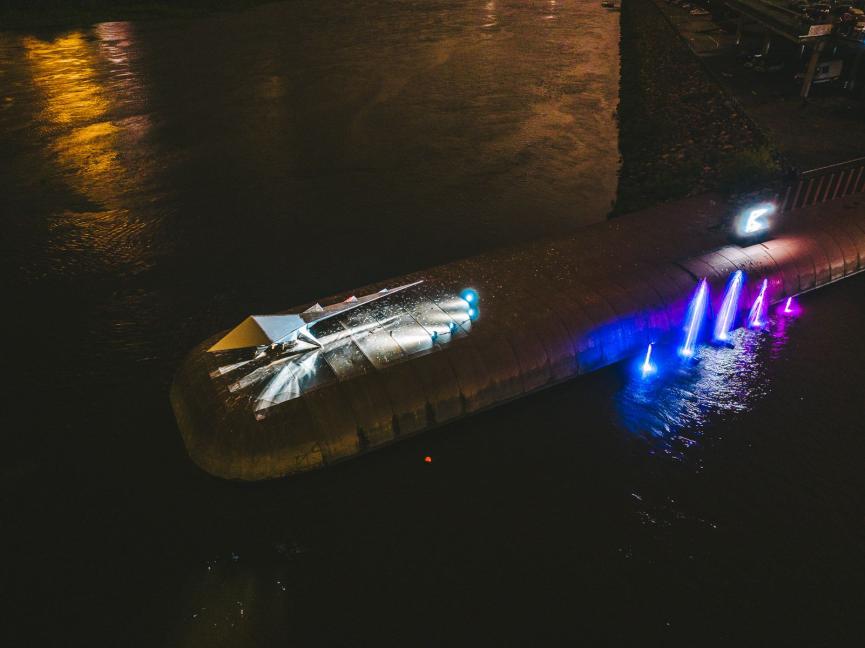 On Sunday, the vector of “Confluence” turned to the Kaunas district. In Zapyškis, the traditional international kite festival “Between the Earth and the Sky” was held, followed by the long-awaited opening of the cultural ship “Nemunas7”. The historic dredge, reborn as an art space, will invite visitors to contemporary art exhibitions, workshops and residencies until the end of the warm season. 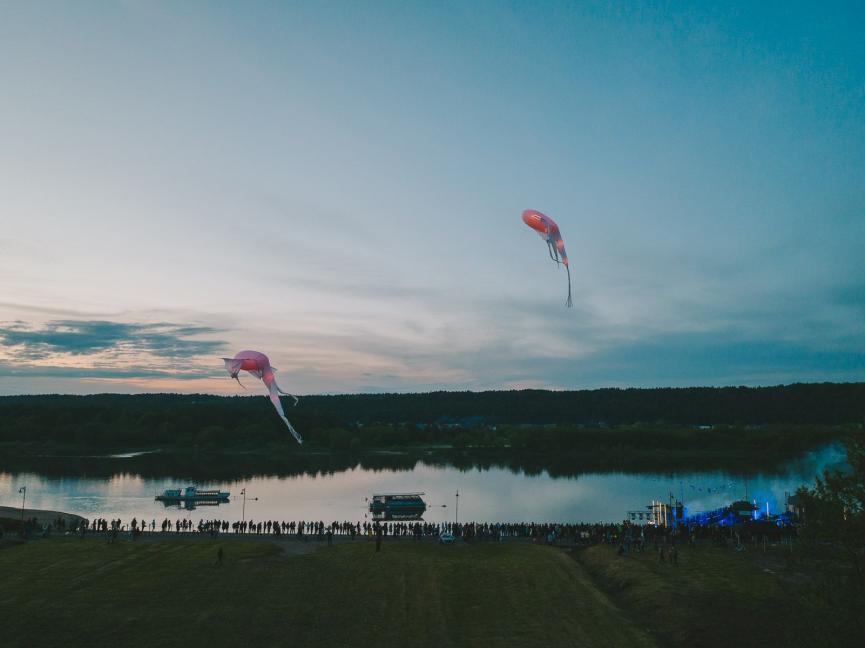 The trilogy of the Contemporary Kaunas Myth, which began with the “Confusion” in January and invited to dive into “Confluence”, will culminate in November with the last act - “Contract”. The European Capital of Culture programme in Kaunas and the Kaunas region continues throughout the year, with hundreds of traditional and debut events planned for 2022, including exhibitions, festivals, performances and other activities created by local and international artists and Kaunas communities. For the complete Kaunas 2022 programme, please visit www.kaunas2022.eu or the mobile app.