The Kaunas Mosque and its Community

'Kaunas is a big city that has plenty of everything. Here, we can afford to live as we please.' 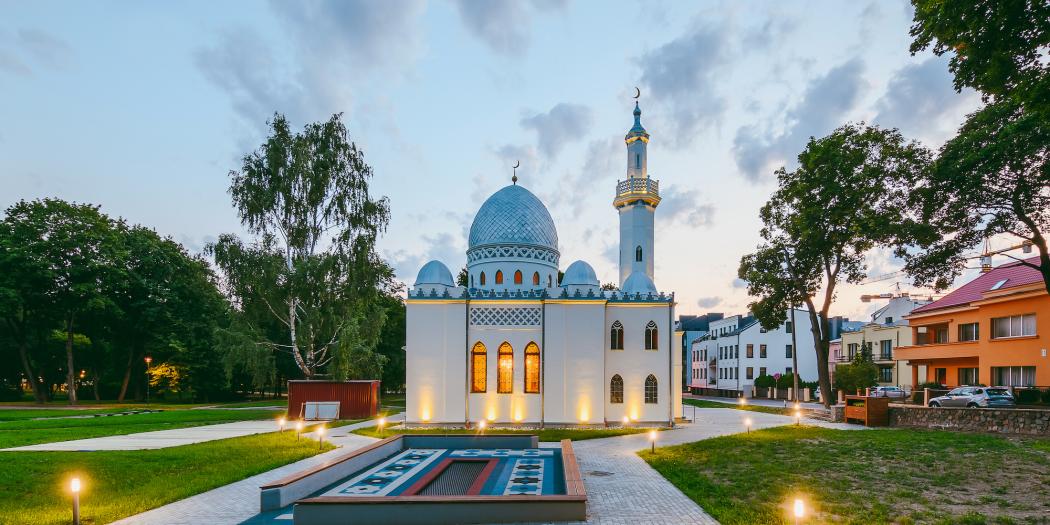 Story and interview by Julija Račiūnaitė for the August 2019 edition of Kaunas Full of Culture magazine. Browse the full issue here.

I am always slightly jealous of the city’s guests’ first impression when they encounter one of the most beautiful corners of the old cemetery of Kaunas, today the Ramybės (Serenity) Park.

The Kaunas Mosque which has been standing here since 1930, evokes not only aesthetic admiration or the joy of discovery. Just like the park, with its complex history, the building testifies that Kaunas was and still is a city of different cultures, communities, and experiences.

Since 1989 Kaunas Mosque is not only a significant historical monument but also a functioning prayer house of Kaunas Muslim Community. Sofian Okat tells us about community history and activities. The chairman of the Kaunas Muslim Community came to Kaunas from Lile in France in 2005 to study via the exchange program. In Kaunas, he met his future wife, the Lithuanian Tatar. For some time, their family with two kids lived in France but in 2014 moved to Kaunas and joined the local Muslim community. 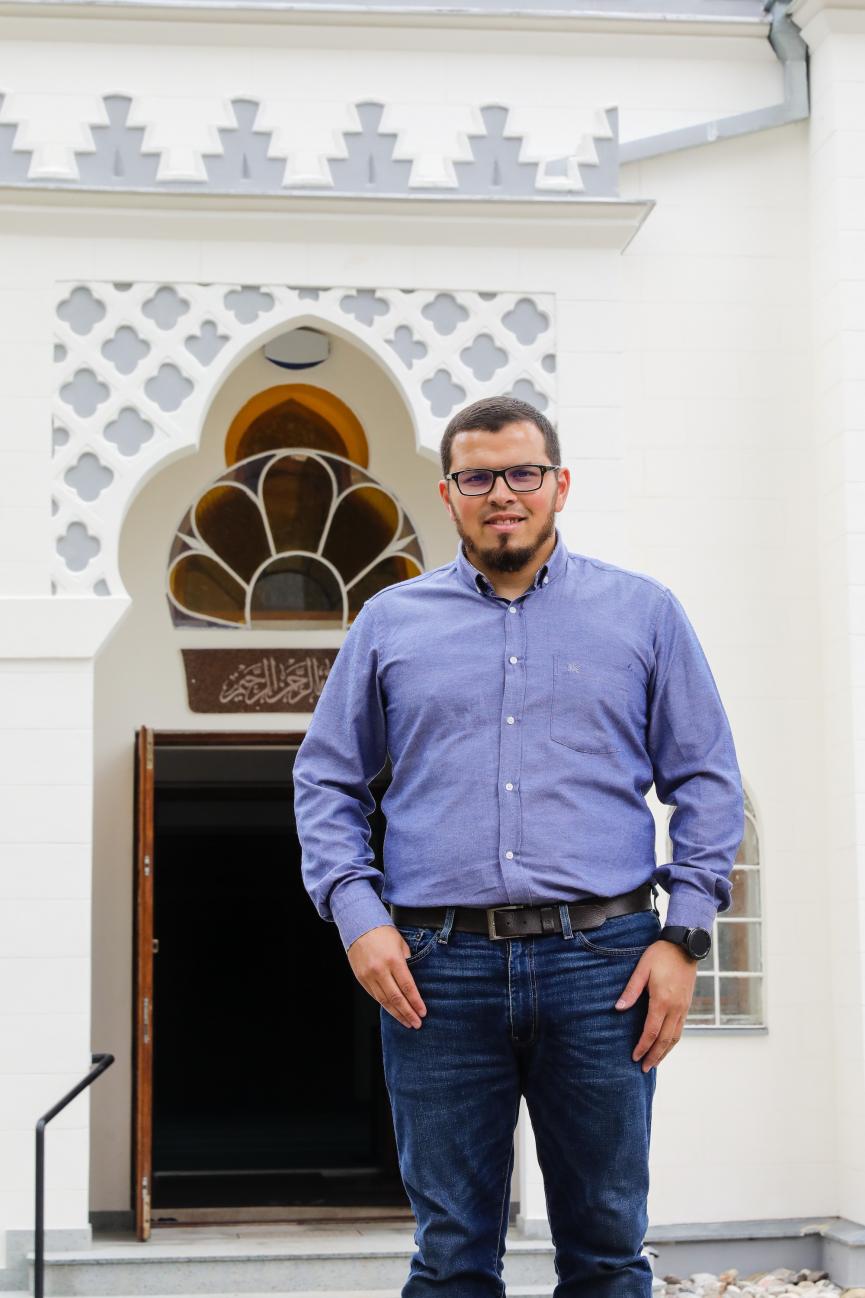 Tell us about the Kaunas Muslim Religious Community and its history.

It is a very long story because Muslims are not new to Lithuania. You have probably heard of Tatars who had settled in the lands given to them by Vytautas the Great (in 1997 Lithuania commemorated the 600th anniversary of Karaites and Tatars settling in Lithuania). They became the first Muslim communities to have settled in these lands. There have not been that many of them in Kaunas but in the mid-19th century under the order of the Tsar of the Russian Empire, the territory of current Ramybės Park was given to four confessions (Orthodox Christians, Catholics, Evangelical Lutherans, and Muslims) and in 1860 a wooden mosque was built right where the current mosque stands. It could be said that this is the oldest place of Muslim religious practice in Kaunas.

The community has changed along with the times. Although, as I mentioned earlier, it consisted mainly of Tatars, some Tsarist Army Muslim soldiers also came to Kaunas and joined the community. At the beginning of the Soviet era, all religious practices, including Islam, were banned. Local Tatars maintained their community, but there were barely any practising Muslims left, people had almost lost their faith. After Lithuania regained its independence, Muslim students from abroad started studying in Kaunas - the first generation was mostly Lebanese. It was they who began to revive customs and religious practices in this mosque. Step by step, the community was gathering, dominated by students from Lebanon, India, Pakistan, Turkey, and Central Asia. Thus, the Tatars are currently a minority in the Muslim community of Kaunas. The majority of its members are foreign students as well as businessmen from Central Asia –  Tajikistan, Kyrgyzstan and so on. Unlike in other religious communities, ours mostly consists of the younger generation from 20 to 40 years old. We have few older members. Currently, the Muslim religious community in Kaunas has about 500 members.

Is it an active community?

It has both active and passive periods. Summer is a quiet time, but in September, when students return, the community always comes alive. Sunni Muslims, orthodox Muslims, follow the same traditions as Muslims around the world, meaning that the mosque organizes daily worship and everyone is free to attend. We receive most people during the main service on Friday – the mosque is usually packed. We also have our traditional celebrations, and they are visited by large numbers of people not only from Kaunas but also Marijampolė, Alytus and other cities that do not have their places of worship. On Sundays, we invite children to the mosque where they can learn Arabic and study the Quran.

It is pleasing to see the revived Kaunas mosque and its surroundings.

As I mentioned earlier, a wooden mosque was first built here in 1860. By the way, next to it stood several buildings. The one was a shelter, and the other was home for the elder of the Tatar community. However, after Kaunas became the capital of Lithuania, it was decided that the city should have a modern brick building (project authors architects Vaclovas Michnevičius and Adolfas Netyksas). Its construction began in 1930, commemorating the 500th anniversary of the death of Vytautas the Great. This mosque became the first and only brick mosque in the Baltic countries. Compared to the Lithuanian wooden mosques, for example, in Nemėžys or the village of Forty Tatars, this mosque is distinguished by its design and architectural solutions. It looks much more oriental due to the shape of its dome and minaret. It operated until World War II, and during the war, it functioned only occasionally. In 1947 the mosque was finally closed under the order of the Soviet authorities. Around 1950 it was given to Kaunas city office. The new government changed the purpose of the building from religious to, let’s say, secular. For some time, the mosque served as a warehouse, a circus, a canteen, and a library.

What circus was located in the mosque?

The circus of Valentinas Dikulis. It seems that the performances of strongmen were held here [laughs]. Of course, it sounds ridiculous, but there is certainly no place for such activities in a religious building. The building was becoming more and more worn out from such activities, and in the 1970s it was given to the National M. K. Čiurlionis Art Museum. After receiving this building, the museum started to implement the project of the oriental art gallery. As part of the project, the mosque’s interior was equipped with a balcony that did not exist before, and the porch that stood outside the building was demolished. Also, as part of this project, a fountain was built next to the mosque – I don’t know if there ever was any water in it. So, the works were started, but the building was never opened as an art gallery. After Lithuania regained its independence, the mosque underwent a partial renovation, which allowed the building to start operating according to its original purpose again. In 2007 another renovation was funded by the Lithuanian Ministry of Culture, but the full renovation started only in 2017 when the Turkish Cooperation and Coordination Agency provided funding for the full renovation of mosque's interior and exterior.

Renovation goes beyond decoration, stained glass, and so on. It also includes the modernization of the entire infrastructure of the building. We are especially thankful for the heated floor. In the past, the rooms were only heated by radiators, and we would have to pray in the cold. Now we are overheating [laughs]! The surrounding area was also tidied up. The fountain in question was in a deplorable condition – abandoned, decayed, and full of garbage. Kaunas Municipality had offered to cooperate and to install a children’s area with a trampoline and places for recreation (the author of the trampoline is artist Morfai). 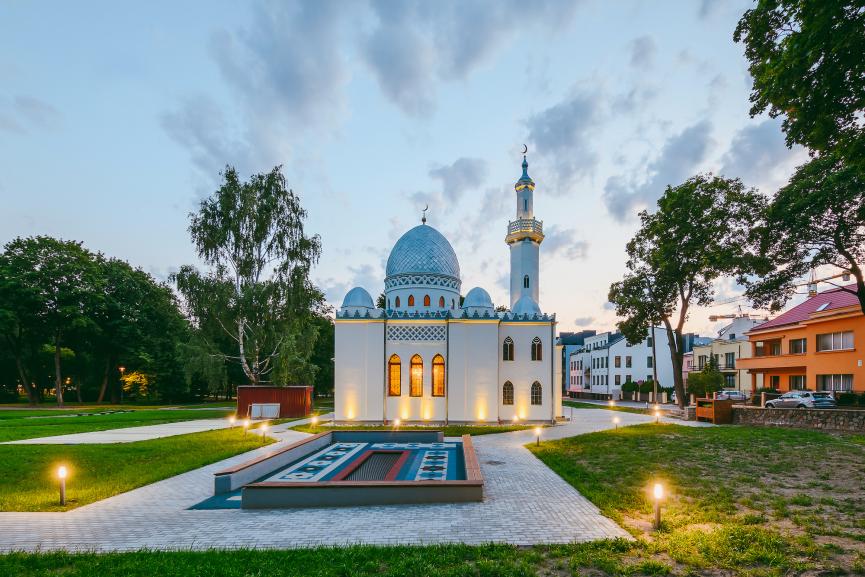 Is Kaunas a friendly city for diverse cultural and religious communities?

Various religious groups have lived together in Kaunas since ancient times, so it is common for Kaunas to unite different people and cultures. Students from our community who come to Kaunas every year via exchange programs integrate easily, do not suffer from racism, xenophobia, and I think that the people of Lithuania are friendly to those who contribute to the economic, cultural growth and well-being of society.

Tell us about the project Islam for Everyone.

It is a website that belongs to the public institution Education and heritage bringing together the Muslim community across Lithuania and also providing useful information and news about Muslim life in Lithuania for them as well as people interested in Islam.

This project is valuable both for newcomers to the community who join every year and for those who wish to link their lives to Islam, such as those seeking to start a family with a Muslim. Thus, one function of the website is to provide advice and information to potential and current community members, and another to establish a closer relationship with the Lithuanian public. We want to show that we are open, we have no secrets, and want to talk and share with each other.

Is there anything you lack in Kaunas?

Kaunas is a big city that has plenty of everything. Here, just as in France, we can afford to live as we please.