Time Travel in Kaunas (From Gothic to the 21st Century)

Travelling between countries seems as improbable as time travel these days, right?.. We decided to combine the two and share a story about the timeline of architecture styles in Kaunas. 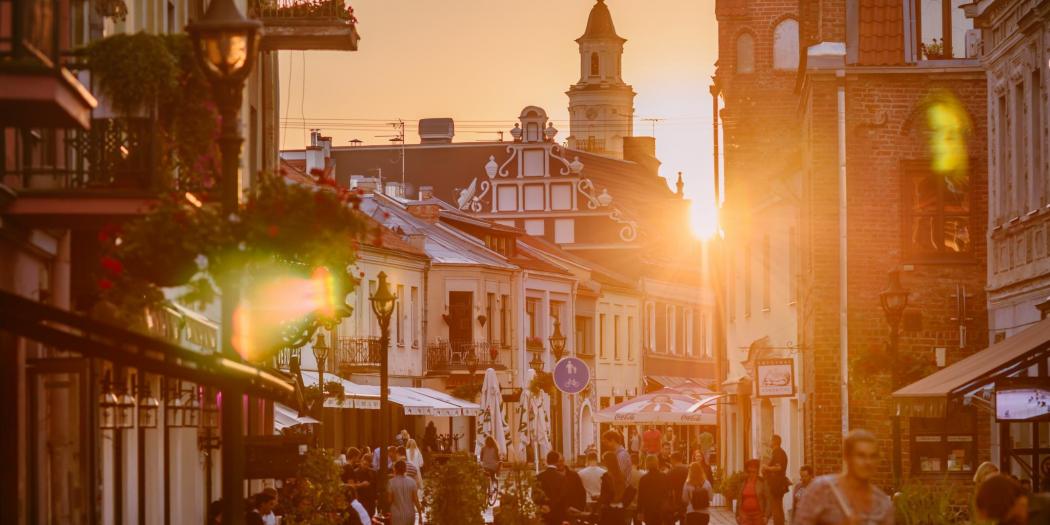 Travelling between countries seems as improbable as time travel these days, right?.. We decided to combine the two and share a story about the timeline of architecture styles in Kaunas, Lithuania. Linas Daubaras, president of the Lithuanian Guide Union, helped us a lot while preparing the article.

The first official written sources about Kaunas date back to the 14th century; this is where we decided to start our little trip. The Old Town of Kaunas is packed with historic buildings representing various architecture styles and epochs; quite commonly, a few types are mixed in one building. Gothic style, which formed in France as early as the 12th century, is recognised for its tall pointed arches and numerous towers. The Kaunas Castle itself was built when this trend reached Lithuania; today, only one of its towers remains and is one of Kaunas City Museum departments. A fantastic example of a flamboyant Gothic style and one of the oldest buildings in Kaunas is the Perkūnas (Thunder) house next to the Town Hall Square. It’s believed that Hanseatic merchants worked there in the 15th centre. Later, the Jesuit monks took it over (there’s a Jesuit high school right there at the same lot). Today, you can learn Medieval dances and discover historical reconstruction, even take part in a Medieval feast in the Thunder house. When you’re done with that, visit the Blessed Virgin Mary church, the only Gothic church in Lithuania that has a plan in the shape of a cross. 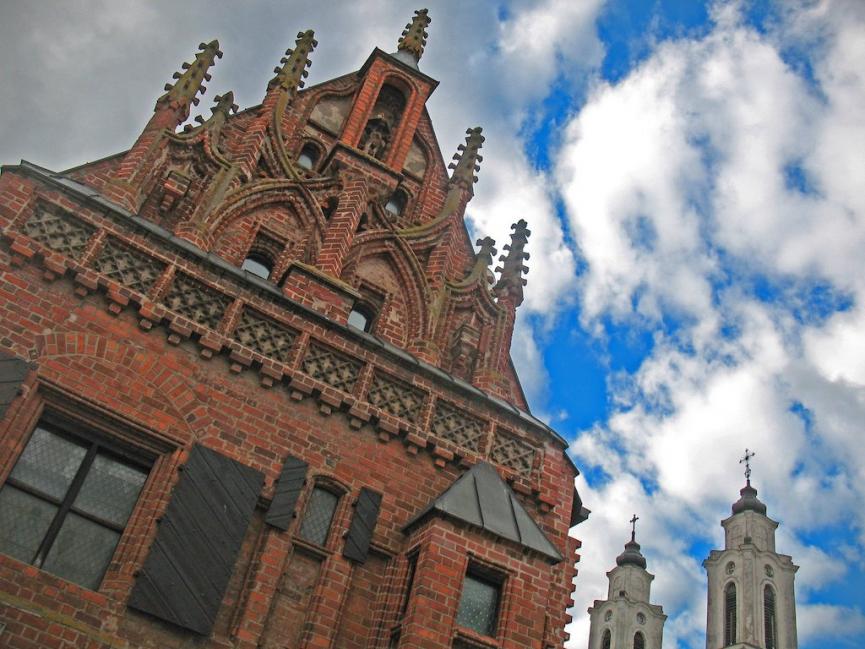 As we’ve mentioned before, the Old Town was rebuilt numerous times – Kaunas was attacked by both enemies and nature powers; the architecture styles changed, too. For example, the Kaunas St. Peter and Paul Cathedral Basilica, located in the heart of the Old Town, was built in the Gothic period, the beginning of the 15th century. Still, many details of Baroque and Neogothic styles can be observed there. There’s an extended Gothic presbytery on the eastern part of the building; especially exciting – and some of the widest in Europe – are the crystal vaults. 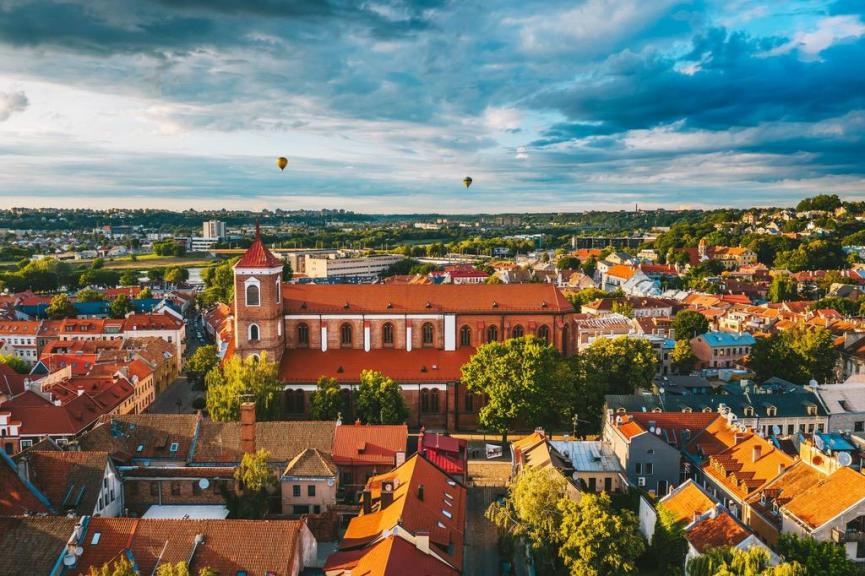 Yet another striking Gothic church is located where today’s downtown Kaunas is. Its the church of St Gertrude, famous for its candle sanctuary that warms the hearts and souls of passers-by even in the darkest times. The church was built in the second part of the 15th century. 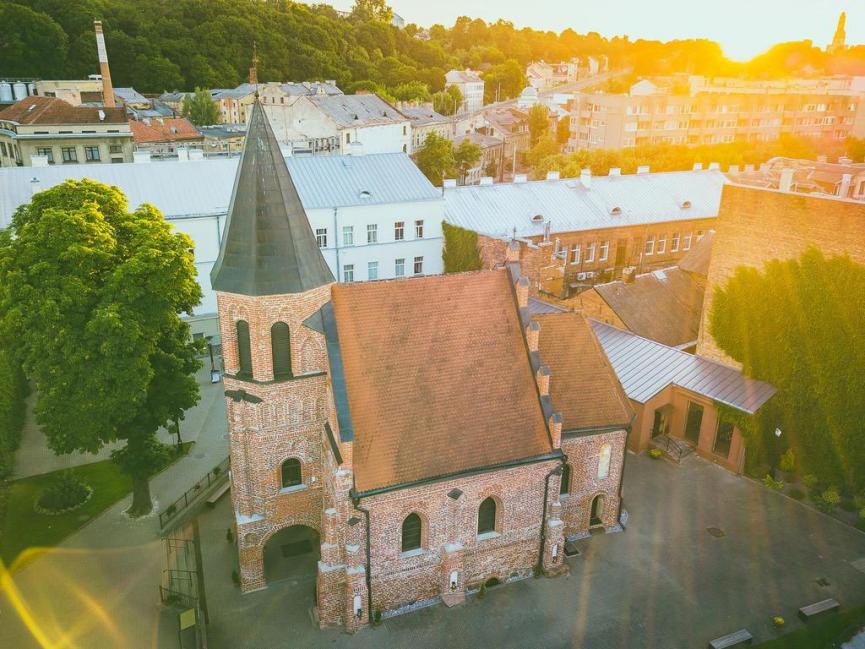 Let’s move on, shall we? Can’t miss the Renaissance, which came to Lithuania only at the end of the 16th century, later than elsewhere in Europe. The style influenced not just the appearance of buildings but also the urban structure of our cities, including Kaunas. A beautiful Renaissance church is the one of Holy Trinity – it does have Gothic details, too. The same goes with building #8 on Muitinės Street – some say Napoleon once stayed there. But let’s focus on Baroque, a style formed in Italy at the end of the 16th century and, some 100 years later, arrived in Lithuania with a bang. Kaunas is proud of the Pažaislis Monastery Complex, one of the finest examples of Baroque in the region. Of course, beautiful buildings can be seen in the Old Town, including St Francis the Xavier church and the Sirutis palace, today the Maironis Lithuanian Literature.

Pažaislis Monastery and the Church of the Visitation is situated in the Petrašiūnai elderate of Kaunas, Lithuania, on a peninsula in the Kaunas Reservoir near the Kaunas Yacht Club. Of course, there was no reservoir when the monastery was first built, but today, the combination of nature and history is truly spectacular.

Founded in 1662 by a nobleman of Grand Duchy of Lithuania and Great Chancellor of Lithuania, Krzysztof Zygmunt Pac, for the Order of the Camaldolese Hermits, the main construction continued until 1674 and resumed in 1712. The monastery was designed by Pietro Puttini, Carlo Puttini and Giovanni Battista Frediani. For the first time in Europe, exclusive architectural solutions were used: a hexagonal church plan and a concave facade. The interior stucco work is ascribed to Joan Merli and the frescos to Michelangelo Palloni. Krzysztof Zygmunt Pac burned the monastery construction bills before his death, saying, “What I have given to God, let him alone know.” He was buried in the monastery accordingly to his testament. Writers of the time wrote that the construction cost 8 barrels of gold coins.

The monastery’s church, decorated with highly polished marble, was damaged by the horses of Napoleon’s army, which was based in the complex. In 1832 the monastery was closed by the Russian authorities and later converted into an Orthodox church. The author of the Imperial Russian national anthem, God Save the Tsar, Alexei Lvov, was interred there in 1870. In 1915-1918 when the Orthodox monks had fled, a German war hospital was established in the monastery. The leaving Orthodox monks stole many treasures from the monastery. After 1920 the ruined abbey was returned to Roman Catholics and was restored by sisters of the Lithuanian convent of St. Casimir. After World War II, the Soviet authorities converted the church and monastery into an archive, a psychiatric hospital, and an art gallery (in 1966). In the 1990s, the complex was returned by the newly independent Lithuania to the convent’s nuns, and reconstruction work began. Today, the functioning monastery is also home to a restaurant and hotel Monte Pacis; HBO’s Catherine the Great was shot there. 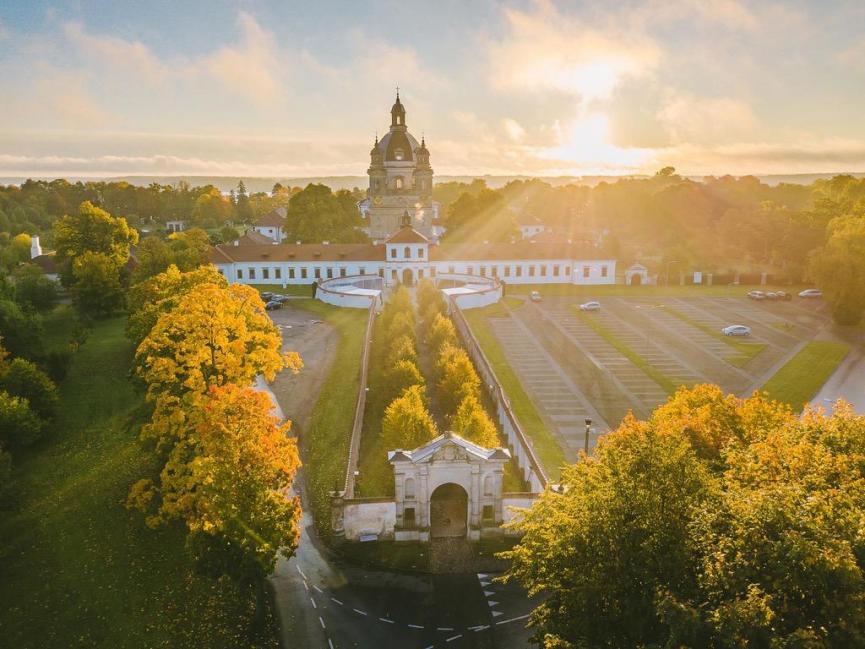 We have to speed up our storytelling train but do invest some time into the history of Kaunas Fortress, which began in the 19th century when Kaunas became an important city on the map of the Russian Empire. Such iconic locations as Laisvės alėja and Soboras church, as well as the fort system itself, is a significant part of our heritage. But now we arrive in the interwar period when Kaunas was declared the temporary capital of Lithuania, a newly reinstated republic on the map of Europe. Overnight, Kaunas had to transform itself from the Russian Governorate’s town to the capital that met the European standard. The city needed to speed things up; it needed to invest, be united, and, most importantly, believe! For various reasons, different professionals born, living, working or studying abroad started coming to Kaunas and collaborating with residents, business people and politicians. Offices, hospitals, schools, residential and industrial buildings, as well as other signs and centres of a modern (and modernist) city, didn’t arise overnight, but... almost.

It is impossible to accommodate all the riches of the modernist period into such a modest article. From 1919 till 1940 alone, 12 000 new buildings we built here! Therefore, we recommend taking a walk on the streets of V. Putvinskio (the representatives of foreign governments were located on it in the interwar period), K. Donelaičio, Kęstučio, Maironio and Mickevičiaus. Then, walk around the block of Trakų and K. Būgos streets located near Ramybės Park; climb the stairs up to the Radio district, wander around Vaižganto and E. Fryko streets, Perkūnas Avenue; walk to the Kaunas County Public Library and get lost in the residential architecture of Lelijų, Radastų and Tulpių street – wooden as well! Finish the modernist tour on Christ’s Resurrection Basilica terrace that guarantees a 360-degree view of our city. 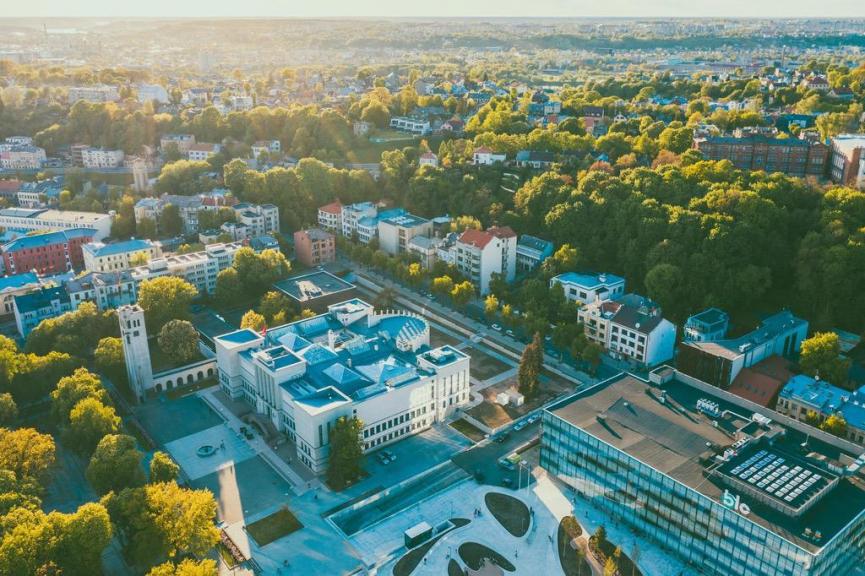 There’s a lot to tell about the times of Soviet occupation and its influence on the mass building of new elderates. You can explore them on your own – only after a long walk you’ll understand the large apartment blocks aren’t exactly all the same and hide many fantastic stories. And now, let’s focus on the phenomenon of the late 20th century – postmodernism, a movement that spread through many scenes of art and culture, including architecture. It’s a bold style that includes various historical details, metaphors and symbols; in fact, many have a love-or-hate relationship with it. There’s a handful of monumental examples of modernism in Kaunas. We’d like to emphasise the Mykolas Žillinskas Art Gallery, situated in a prime location near Soboras church. Reminding of an (art) temple, it was built in the late 80s (architects Eugenijus Miliūnas, Kęstutis Kisielius, Saulius Juškys) and has already been included in the Cultural value list of Lithuania – it is the first building of this style and period to be protected by the state. 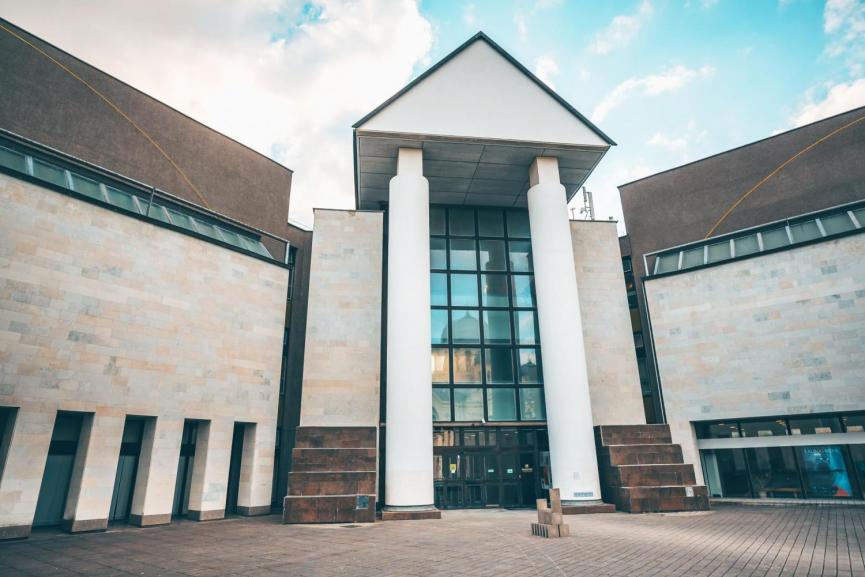 It’s quite complicated to analyse and discuss contemporary architecture – most probably, art historians will talk about it in some 30 years. The thing is, the traditions of modern building in Kaunas were heavily influenced by the newly reinstated independence, unlimited sources of inspiration and information from other countries, money flows and, of course, the ever-fluctuating relationship between the city and its people, the search for our new identities and rediscovering the historical facts and figures. Currently, there’s not a single part of Kaunas that could be defined as the ‘contemporary building zone’ – even the Old Town has some 21st-century inclusions, some less successful than the others. Best seen because of their size and location are the Žalgiris arena on Nemunas island and the Akropolis mall next to it (interestingly, the mall’s structure resembles a network of streets that were previously there; even an old house was incorporated in the architectural decision). In the same area, new office buildings were rapidly built in the past few years, making this part of the downtown a business centre every modern city needs. Oh, and the next big openings everyone is excited about is the Science Island museum in the Nemunas island and the Basketball House (also a museum) in the confluence of Nemunas and Neris rivers. 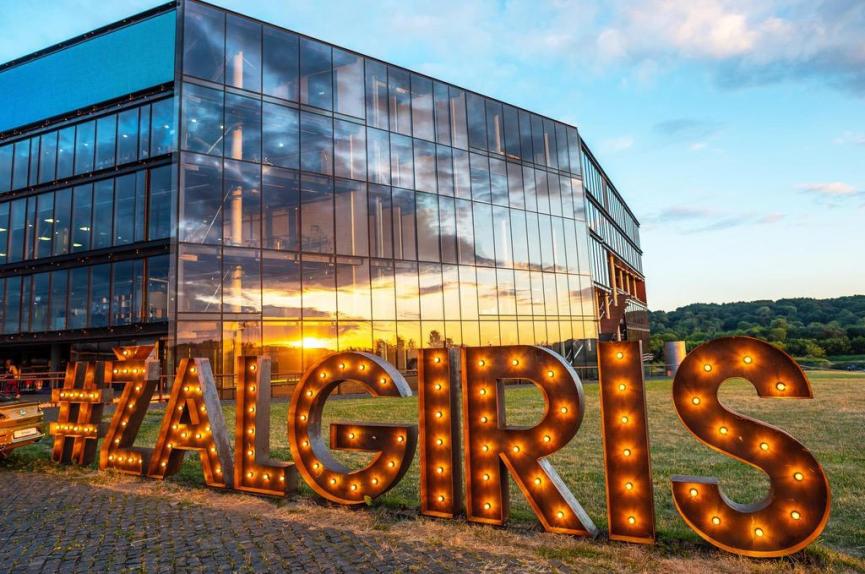 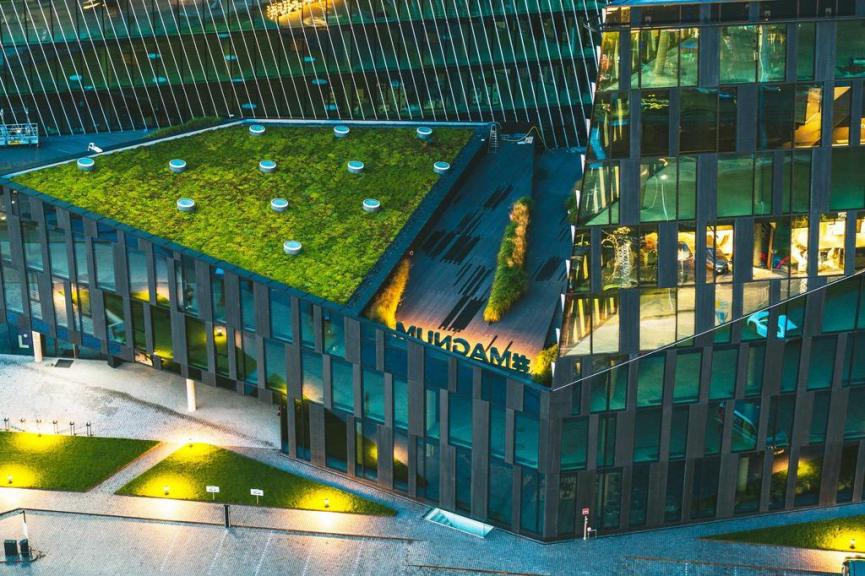