Two Kaunastic Days: How to Make the Most of Your Weekend 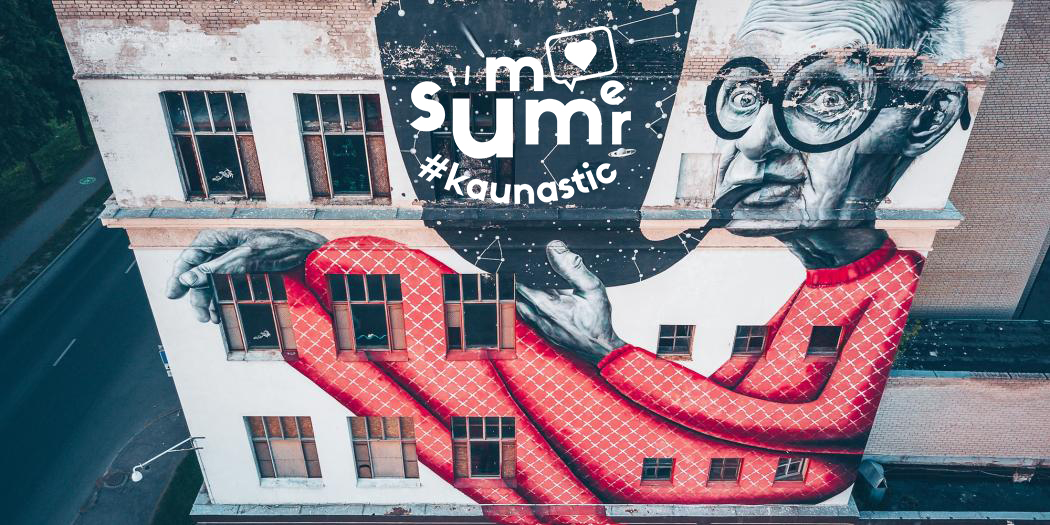 Thinking of an inspiring yet affordable weekend getaway? What about Kaunas, the future European Capital of Culture, the UNESCO City of Design and the former temporary capital of the First Republic of Lithuania? Conveniently located in the centre of the biggest of the Baltic countries, Kaunas can easily be reached by plane (see Kaunas airport or Vilnius airport), international bus, car or train. If you’ve already chosen your dates and type of travel, we suggest you take a look at a kaunastic weekend itinerary we’ve prepared for you.

The suggested itinerary for two days in Kaunas is free-form and totally expandable into a three- or four-day stay in Kaunas. The city is compact, so it’s totally up to you where you will be staying. Both Old Town and downtown Kaunas have plenty of affordable hotels, hostels and private accommodation options. We recommend checking out the new and extremely contemporary Moxy Kaunas Center opening in August!

Walking between the objects is a good option. Taxi trips are affordable and worth considering (Bolt app is trusted and recommended by the locals), especially if you want to visit more remote places like Pažaislis or the Ninth Fort. CityBee offers car sharing and bike sharing sharing services, while Bolt also offers e-scooters. More tips for getting around Kaunas can be found here.

DAY 1 – Old Town and Beyond

The place to start your weekend in Kaunas is the Kaunas Castle, one of the oldest buildings in town. First built in the 14th century, the whole structure didn’t survive until the 21st century. One of the towers did! It’s today part of the Kaunas City Museum and offers a tight yet in-depth historical exposition. A stone’s throw from the castle is probably the best-known mural in Kaunas, called the Old Wise Man. It’s just one of many examples of contemporary street art in the historic city. Look for the official street map of Kaunas called the Wallographer’s Notes to discover much more. 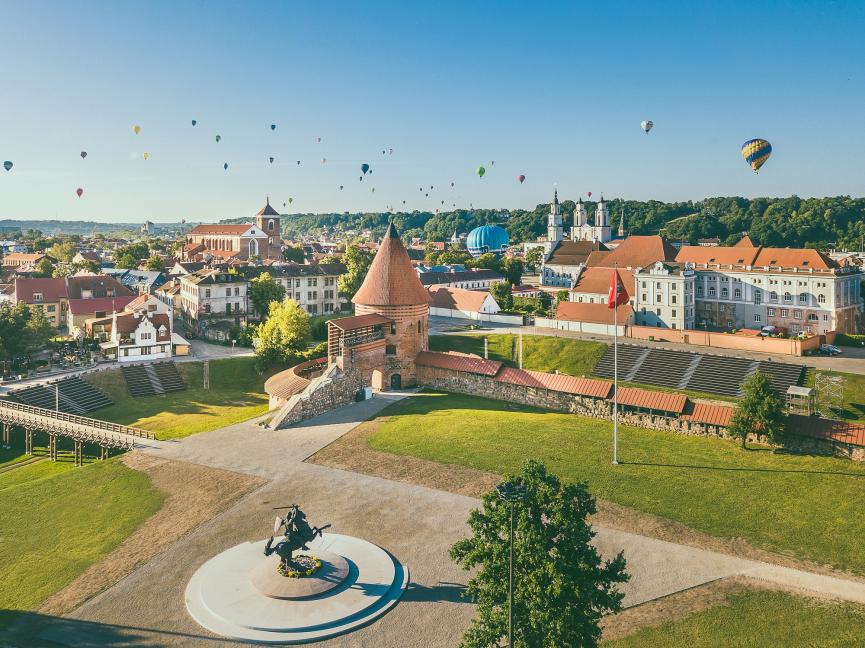 Kaunas Castle. Photo by A. Aleksandravičius

The Old Wise Man. Photo by A. Aleksandravičius

The best place to get the map mentioned above, as well as many other free publications and some of the cutest souvenirs out there, is the Kaunas IN Tourism Information Centre located in the Town Hall. The beautiful white building surrounded by trendy cafes and art galleries is where people of Kaunas get married – it’s also a branch of the Kaunas City Museum. Do climb all the way to the tower!

Yet another museum in the Old Town we recommend is the Folk Music Branch of Kaunas City Museum. It’s usually fascinating for young travellers and families – also great for those interested in the traditional music of various regions and its contemporary interpretations. 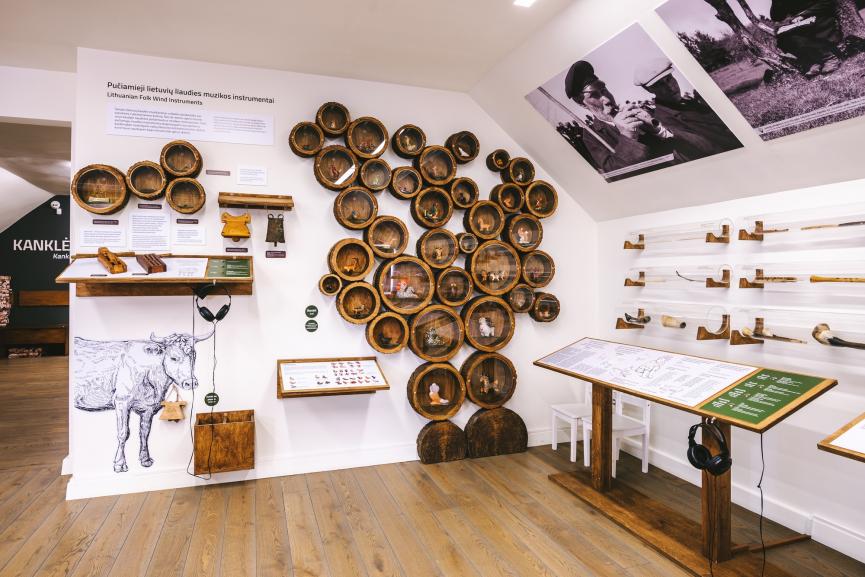 Folk instruments, anyone? Photo by A. Aleksandravičius

Vilniaus street, the central axis of the Old Town, is packed with cafes and restaurants – same as the Old Town Square. Visit Avilys for locally made beer, ManGi for perfect hotdogs, Lithuanian Pub Entry for interwar Lithuanian and Litvak recipes, Klimas for late-night drinks, Agave for authentic Mexican cuisine, Hop Doc and Nisha for craft beer selection or Galeria Urbana for inventive finger food. More places to eat can be found at our food map called the Kaunas Gastro Guide. 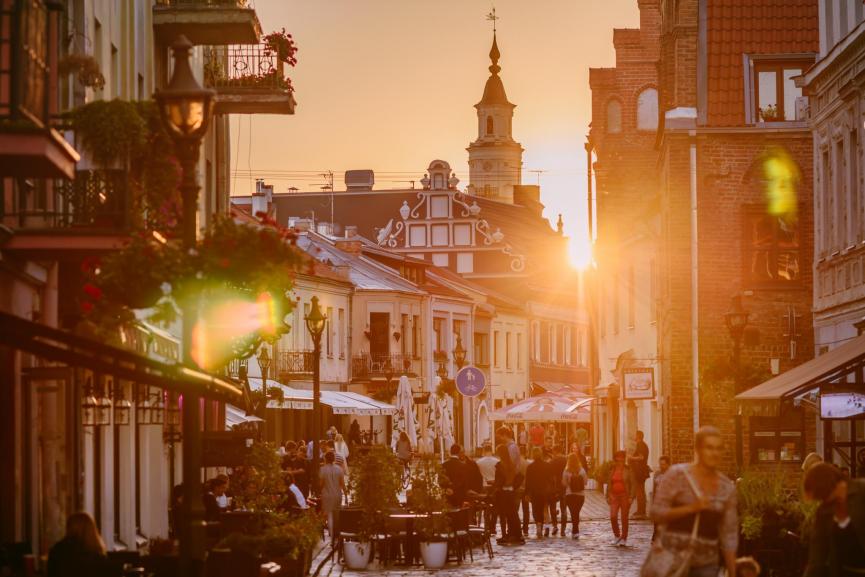 Vilnius street. Photo by A. Aleksandravičius

Have some time left before it gets dark? Take a ride to the Ninth Fort. Part of the Tsar-built Kaunas fortress, it’s also home to a museum exploring the history of Holocaust and one of the most significant war memorials you’ve seen. If you want to dig deeper into the subject, visit the Sugihara House in Žaliakalnis, the former Japanese embassy and now a small museum focusing on Holocaust and Litvak history in Lithuania.

Once you’re done with sightseeing, we suggest you take a look at what open-air terraces have to offer. In Nemunas island, next to Žalgirio arena, the biggest multifunctional venue in the Baltic states is home of Lithuania’s most loved and most awarded basketball club Žalgiris, there’s a summer concert place called Pakrantė. Surrounded by food trucks and bars, the stage is usually filled by some of the best Lithuanian singers and musicians. The nature-meets-industrial riverside view is worth a million bucks!

Other open-air concert places include KKC terasa (with a sliding roof, which is perfect for a rainier night), Laukas (next to Soboras) and Adform kiemelis (next to the Town Hall). Most gigs this summer are by Lithuanian artists, and they’re all worth discovering. 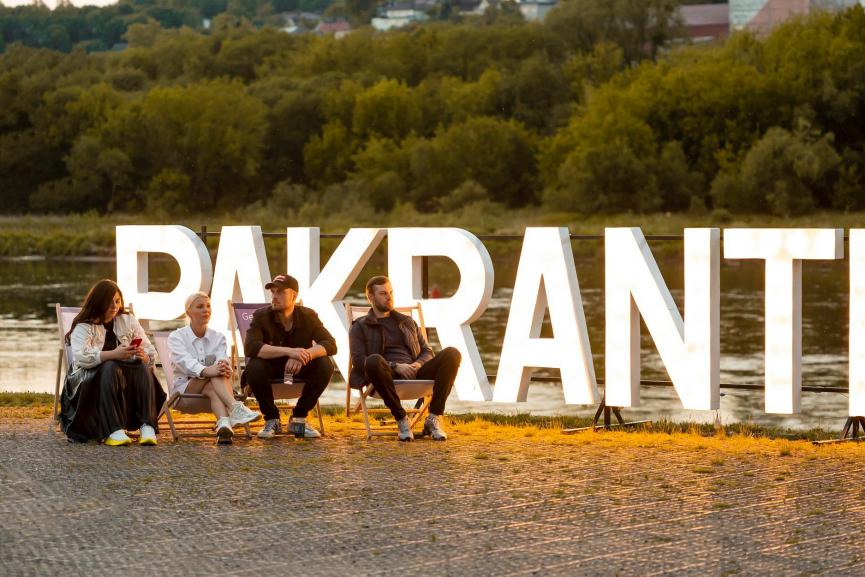 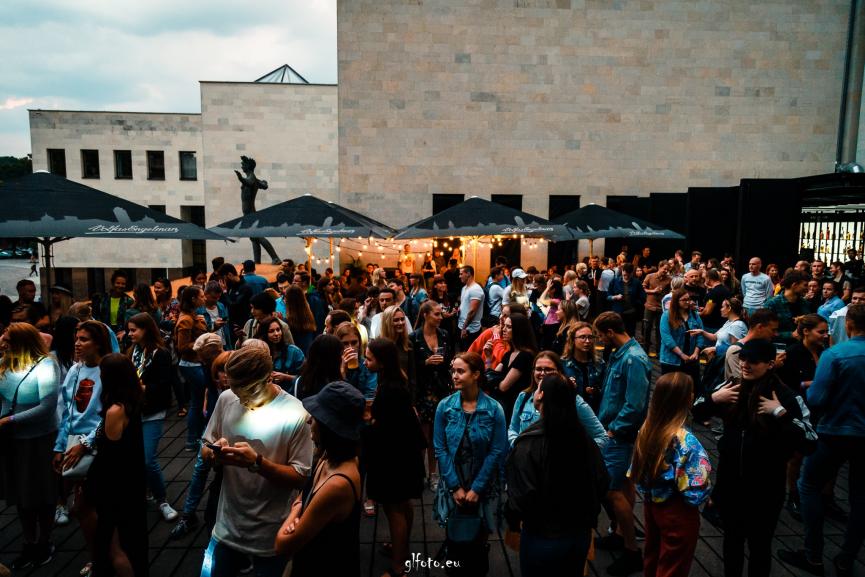 If you decide to skip the partying on the first night and wake up early, why not have a decent breakfast (Holy Donut, for example!) and head to Pažaislis monastery, a spectacular example of Baroque architecture? Located near the Kaunas Reservoir, it’s surrounded by a lush forest. The functioning monastery is home to a small museum of sacral art as well as a hospitality complex Monte Pacis. The latter has received multiple praises for its outstanding menu and elegantly decorated rooms. An idea for a special dinner, perhaps? 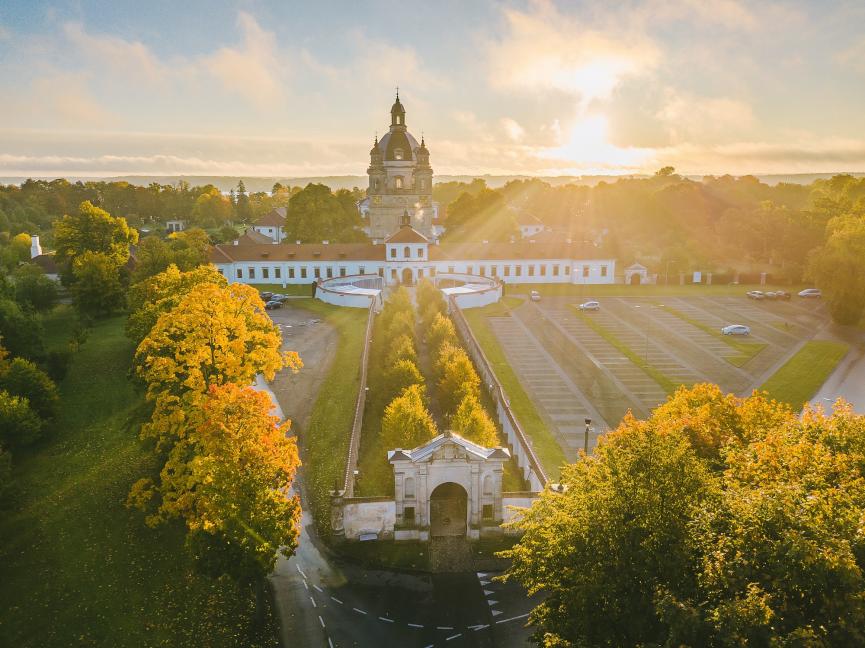 Pažaislis monastery. Photo by A. Aleksandravičius

… It’s time we head back to the centre of the city and dive into the unbelievably dense network of modernist architecture. Hundreds, even thousands of new buildings rose when Kaunas served as the temporary capital of Lithuania between the world wars. Don’t miss the excellent examples of interwar art and craft lined along V. Putvinskio street, including the National M. K. Čiurlionis Museum of Art. Its permanent and temporary exhibitions are worth an hour or two, as well as the world’s only Devils Museum. Insider tip: visiting both museums and many more in Kaunas is free of charge on the last Sunday of the month. If you continue walking down the street you’ll end up in the Yard Gallery, a fine example of community street art projects – you’ll also see the famous Pink Elephant mural on your way there. 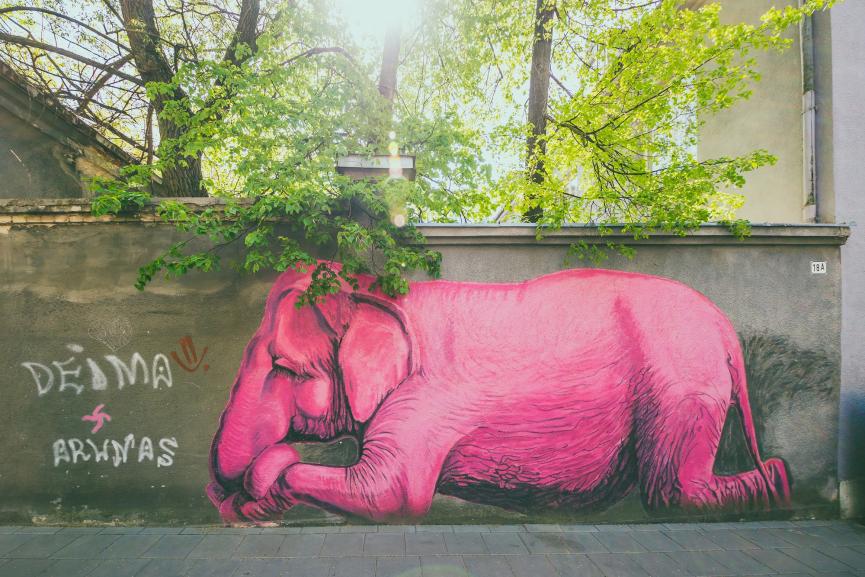 The Pink Elephant. Photo by A. Aleksandravičius

On the other side of V. Putvinskio street is a historic funicular, one of two in Kaunas – both are still operating. This one will take you to the monumental Christ’s Resurrection Basilica. It was started to be built in the 1930s, was converted to a radio factory during the Soviet occupation, and finally consecrated just a couple of decades ago.

How can one forget mentioning Laisvės alėja, one of the longest pedestrian boulevards in this part of Europe? Full of cafes, theatres, shops and other objects of interests, it’s loved by fans of architecture, students and basically everyone else. It’s also a good starting point for a dinner quest. A stone’s throw from the boulevard are some of the city’s finest restaurants, including Uoksas, DIA and Momo Grill. Book in advance.

At night, a great place to start is the Nepriklausomybės (Independence) square. A handful of stylish pubs and bars have recently opened in it and near it. Genys Taproom, Rebels and Nuogas are some of the most popular ones. In a corner under the M. Žilinskas Art Gallery (currently closed for renovation) there’s a nightclub called Lizdas, favourited by fans of electronic music. For lighter rhythms, choose Anna Mesha, its closest neighbour. Craft beer hunters should head to A. Mickevičiaus street and visit Vingiu Dubingiu pub, offering an impressive selection of local brews and imports from our closest neighbours.

Another bar to check out if you want to mingle with the trendy local art crowd is Kultūra, located on the steps of Kaunas Picture Gallery. The gallery is also worth a visit, especially if you’re into Fluxus art movement, as it’s home to George Maciunas Fluxus Cabinet. In fact, it is being renamed to George Maciunas Gallery as we speak! A hundred or so metres away is the George Maciunas Square, an art declaration you can’t (legally) enter. 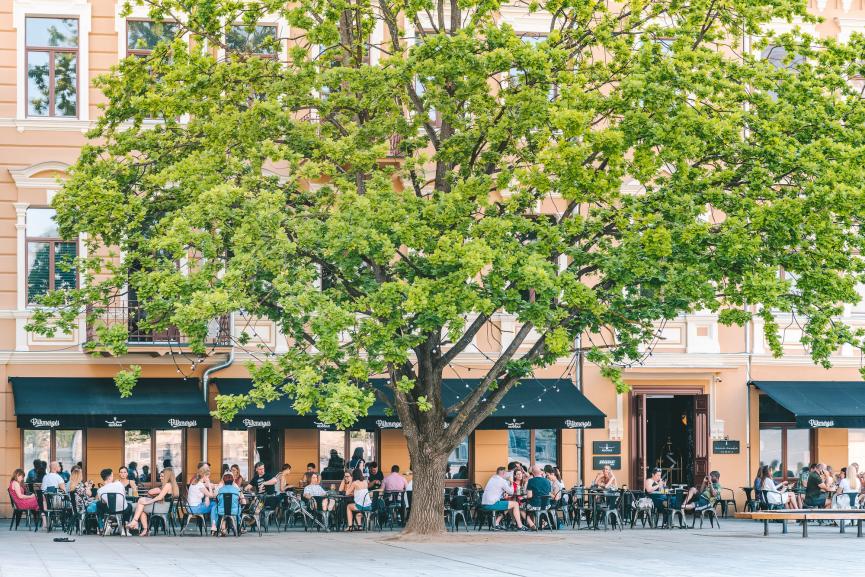 Nepriklausomybės square. Photo by A. Aleksandravičius 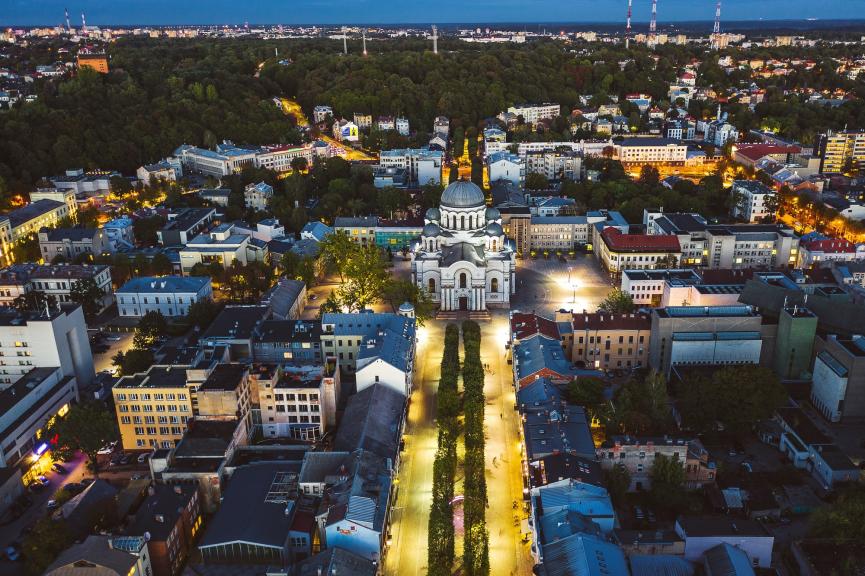 Laisvės alėja and Nepriklausomybės square. Photo by A. Aleksandravičius

If you have some extra time, we suggest you visit the peaceful Žaliakalnis neighbourhood up the hill (this is where the funicular takes you), full of modernist and wooden architecture, the busy campus of the Kaunas University of Technology, a big oak grove and Lithuania’s oldest zoo. The down-to-earth neighbourhood of Šančiai, carved with cute narrow streets, is also something to consider.

You’re welcome to check out the maps & guides section of our website and pick any of the illustrated routes.

Have a #kaunastic trip and don’t forget to tag your Instagram stories and pictures!