Under the old Kaunas (Pictures!)

The tour by Kaunas IN Tourism Information Center called 'The Spirit of Kaunas Catacombs' each year attracts a number of Kaunas residents and guests.

I have always been fascinated by mysterious places, which create a special feeling with their unique appearance, legends or perhaps an incredibly rich history. Kaunas Old Town can be proud of at least a few of such places; however, some of the enigmatic and dark spaces are hidden deep under popular landmarks. I have no doubt that many people feel a certain fascination, excitement or curiosity (that are hard to explain) about the places that are hidden from sunlight with several layers of soil.

Hundreds of tourists eagerly visit the huge catacombs of Paris or go on excursions around the London Underground tunnels, but Kaunas is also full of centuries-old underground spaces and curious people who want to enter them. The tour by Kaunas IN Tourism Information Center called The Spirit of Kaunas Catacombs, which each year attracts a number of Kaunas residents and guests (and the first such themed tour took place at the end of the last century!), also points to the attraction of these places.

According to the tour guide Dalia Leonavičienė, the ample underground heritage of Kaunas can be attributed to the fact that a strong class of merchants emerged here shortly after the founding of the city. Perhaps the tradition to build huge basements, the size of which in merchants’ houses sometimes exceeded even the entire area of the house, was also encouraged by the fact that Kaunas cooperated with the cities of the Hanseatic League. Maybe it also influenced the specific structure of the house with workshops or shops on the ground floor, living quarters on the first floor, and refrigerator-storage room in the basement (meanwhile in neighbouring Latvia, goods and other items were stored in attics). The main goods – beeswax, wood, food, salt, clothing, and fur – sold and bought – were usually stored in such underground storage facilities.

Of course, the cellars were not useful for merchants only. Nobles liked to store various things there, including wine and beer, into which they were first in Europe to start adding honey. However, the catacombs of the Old Town seen during the tour, today, function more as collages of historic signs for the eyes of tourists than functional storage facilities.

The walls of Kaunas Castle catacombs are characterized by a particularly colourful mixture of historical stylistic elements. As emphasized by the tour guide, the castle has retained some of its original materials – mostly stones that have survived since the 14th century, because instead of grandiose reconstructions, the building was constantly being fortified. Today, Gothic, Renaissance and Baroque bricks, aged white plaster, and newer fortifications can be found in these walls. However, although the mosaic of bricks makes it possible to get to know the history of the castle at least a little bit better, a considerable number of underground passages with their veil of mystery, remain undiscovered. 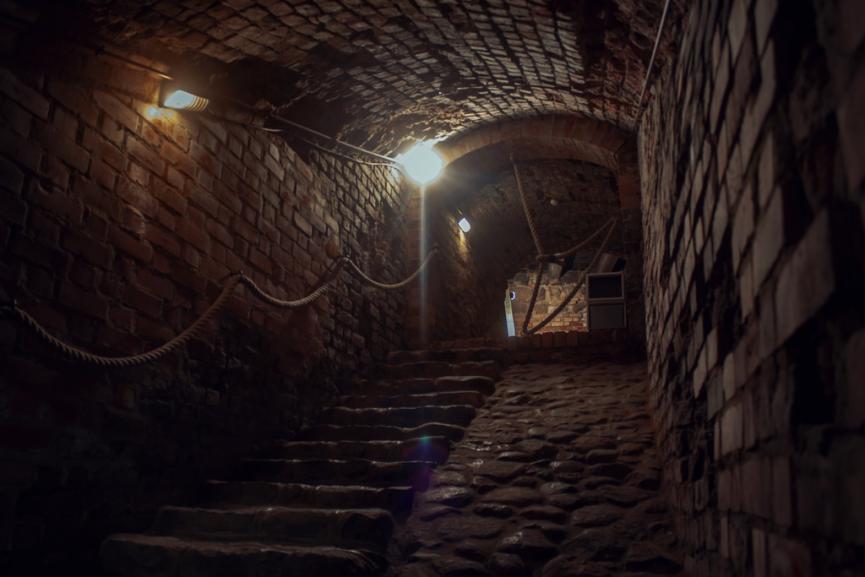 D. Leonavičienė said that the builders found one secret tunnel during the reconstruction of the castle. The beginning of this passage can be seen in the spaces open to visitors today, but the stairs leading down are covered. Unfortunately, the tunnel has collapsed and is impassable; therefore, it is not clear where it actually leads. According to some legends, several hundred years ago, the tunnels connected Kaunas Castle with the Bernardine monastery that was being newly established then and Vaidotas – brother of Vytautas the Great – who was responsible for the castle’s defence, would be able to use the secret passage during the siege. However, he did not manage to find the passage. Now, one can only speculate as to whether the impassible underground spaces were the unused escape passages.

Kaunas Town Hall also hides its stories in the underground halls. Here you can see the 16th-century quoin of the building, temporary exhibitions, and permanent expositions of ceramics and brassware. A beautiful collection of tiles for stove decoration and pages of old traditional recipes await the visitors. The former jail cell probably gets the most attention from visitors. The guide did not recommend staying here for a long time because the space is depressing. And indeed, a half-meter lower ceiling and a small dark room evoke unpleasant, even claustrophobic feelings. Prisoners with death sentences would spend their last days here without sunlight. Many strange events are related to this jail cell. D. Leonavičienė assures that employees usually associate inexplicable sounds, shadows and other ghostly things with this room. However, it is said that in order to feel, hear or see the ghosts of the old inhabitants of the Town Hall or Kaunas Castle, one needs to be completely alone in the catacombs. 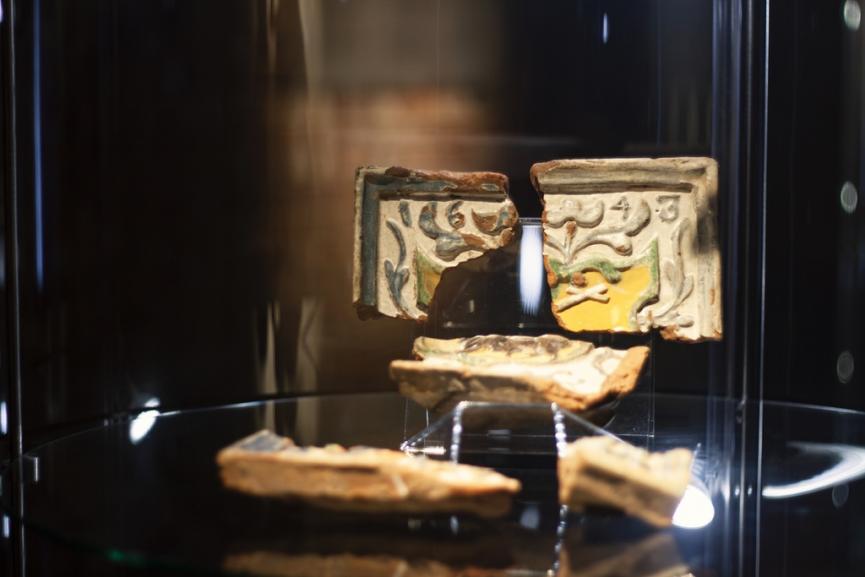 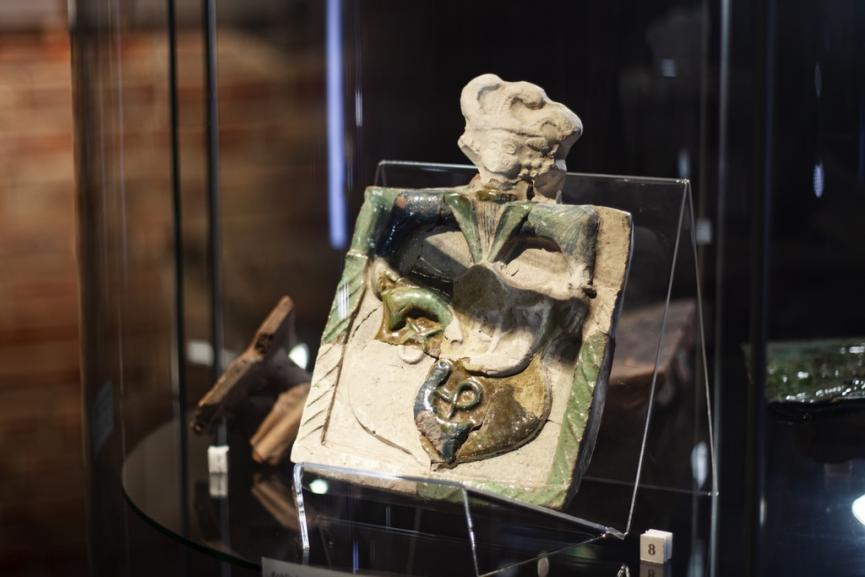 Ceramic tiles at the Town Hall

Ghost stories can also be heard from another, somewhat unexpected, place of interest – Maironis Lithuanian Literature Museum. Much before the poet bought the building, it belonged to a family of merchants and, as usual, contained underground premises – two basements. Now, these spaces are symbolically called the Devil’s Lair and the Shelter of Angels. The first is related to painful events when, after the uprising of 1863-1864, its initiators, including the priest Antanas Mackevičius, were brutally tortured here, and the metal chains hanging in the cellar remind us of that. The space of negative energy, in which five rebels lost their lives, is counterbalanced by the Shelter of Angels filled with positivity. Various cultural events – workshops, exhibitions, anniversaries of artists, concerts – are actively being held here. In addition, the underground spaces of the museum have charming architecture elements: wide vaults, arches marking the already bricked passages, a variety of bricks and stones used for construction. 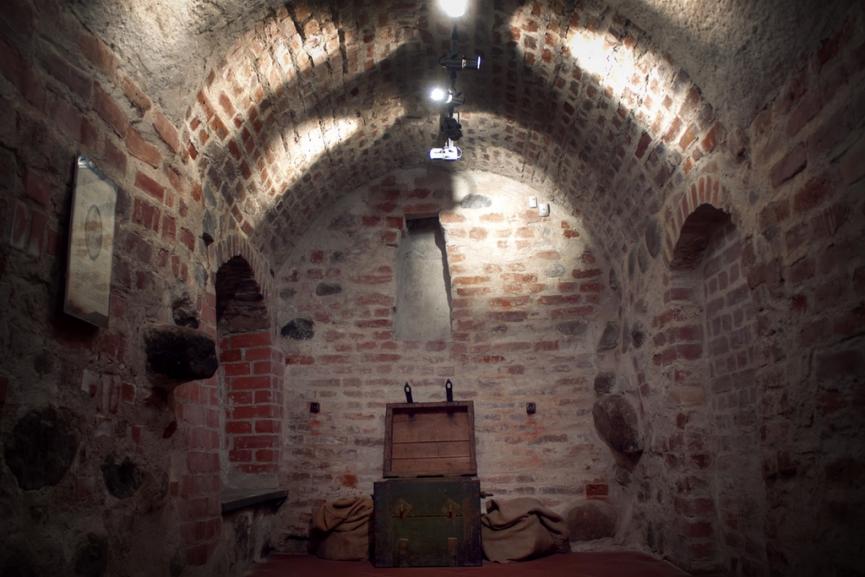 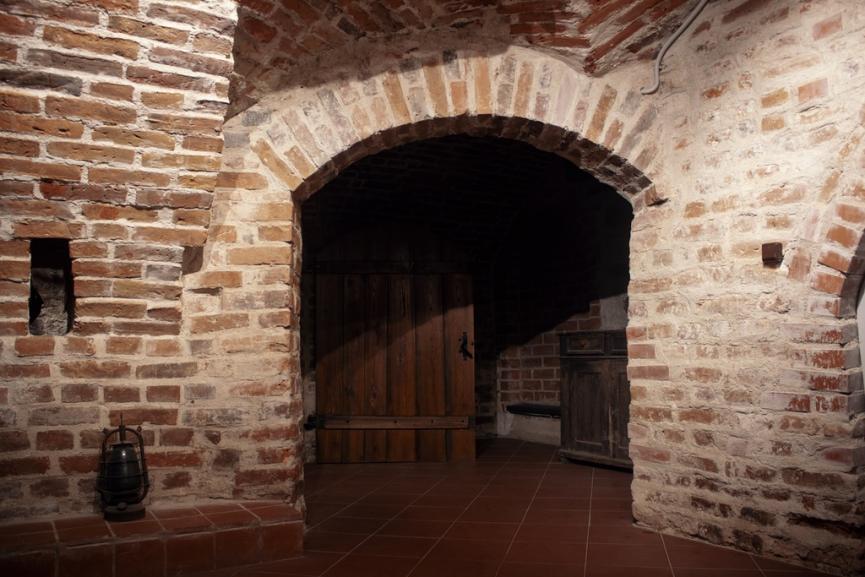 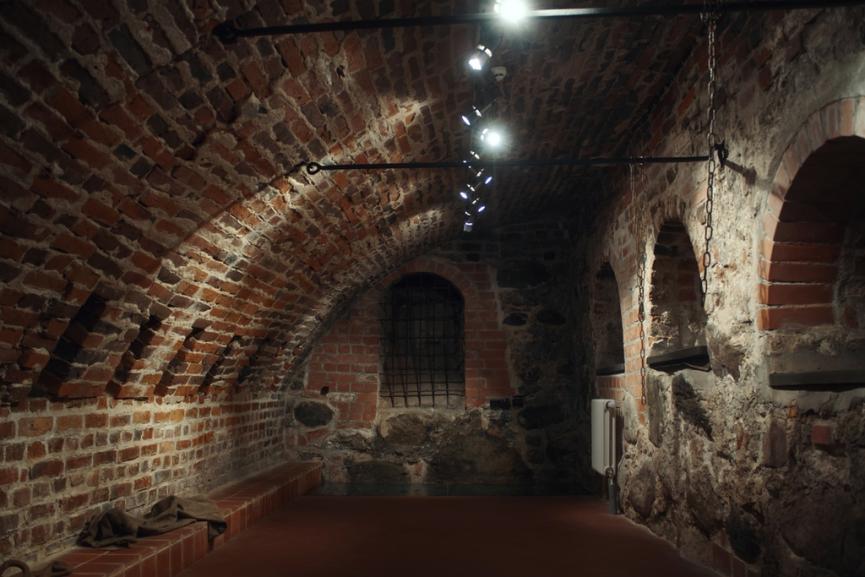 Although D. Leonavičienė is not inclined to believe the rumours that once underground tunnels connected even Pažaislis and Carmelite monasteries in Kaunas, the guide has no doubt that a large number of old underground spaces remain undiscovered. Along with the collapsed passages, they are probably hiding a set of stories that are still waiting to be discovered, or perhaps will remain buried underground forever. Still, adrenaline-chasing curious people will still be able to hear unexplained ghost stories. Lovers of history and architecture will also discover interesting things under the pavement of Kaunas Old Town. Just make sure you don’t get lost.

Story and pictures by Justė Vyšniauskaitė.
The article was published in the September issue of Kaunas Full of Culture magazine. Browse its digital archive here.