We Talked to the Author of the Kaunas Cats

The street tag series is turning 10 next year. 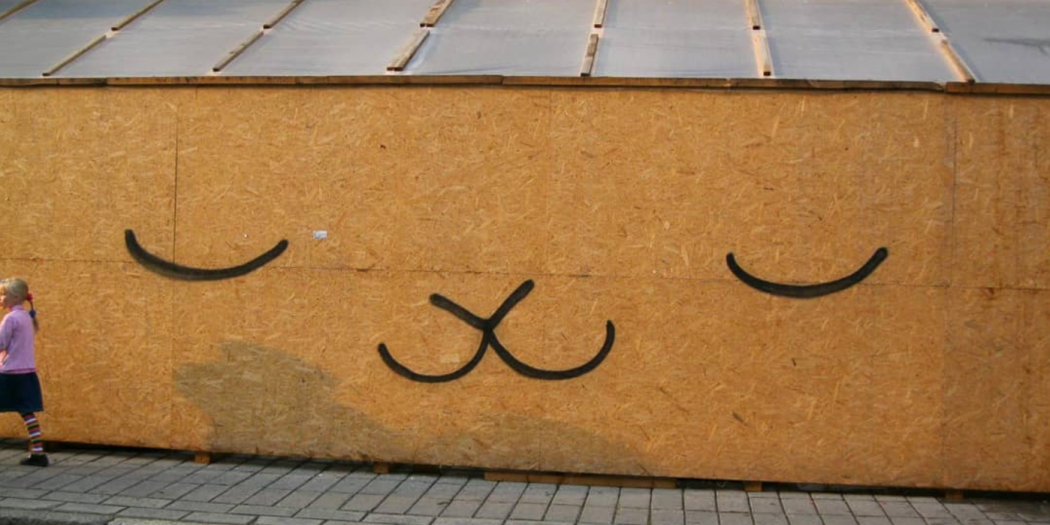 The peaceful cat tag is one of the best-known symbols of contemporary Kaunas – not just the streets, but the general atmosphere of the city. It’s not a brand nor a logo – anonymous, random, scattered and not exactly legal, the symbol represents the essence of street art. As the author of the tag has recently appeared on Instagram as @allcatsarebeautifultome, we couldn’t help but contact him (her?) and ask some questions. Without revealing his identity, the author has provided us with some thoughtful insights into the concept, as well as a few stories that have happened throughout the years. Yup, it’s been some 10 years – we hope the cat has many more lives up the sleeve! 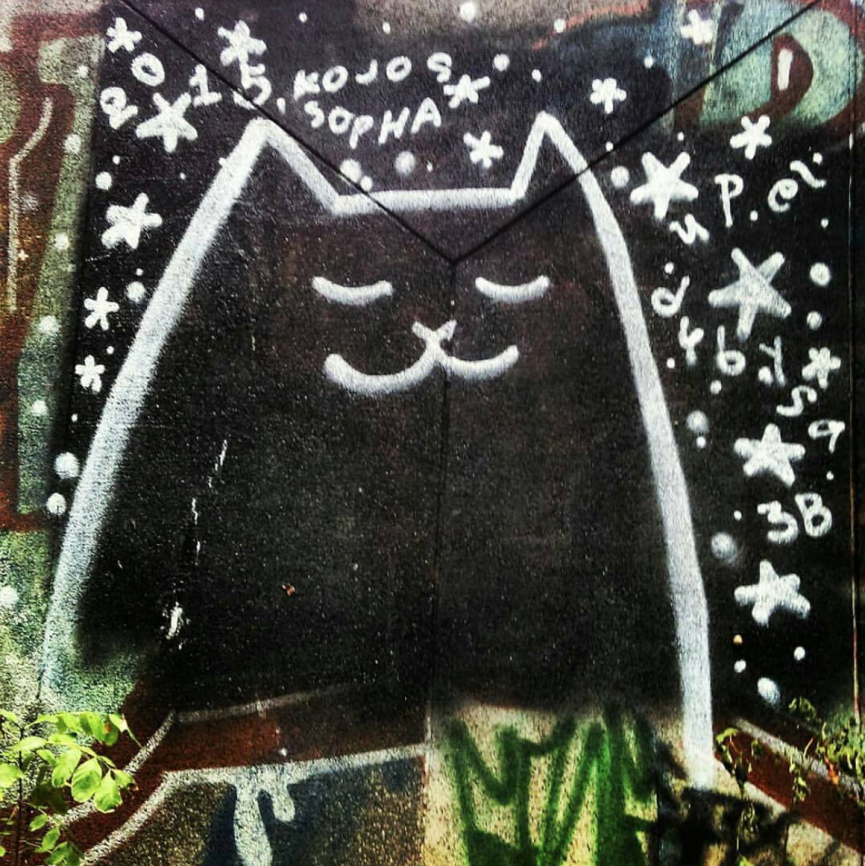 Hi, cat man! Do you remember which tag was the first one – and why was it born?

The oldest picture I’ve got dates back to 2010, so, let’s say the cats are turning 10 next year. The first one doesn’t exist anymore, as the kiosk it was on was demolished. I remember climbing the Parodos hill and thinking of a street art tool to express a positive message to the citizens of kaunas, something like “it’s going to be alright”, but without any text. So I drew a calm, smiling cat near the Kregždutė cafe which is on the hill. Why a cat? There were quite many of them on the streets of Kaunas at that time. I like cats in general.

There’s a theory floating around that the tags are done by a collective of artists that don’t know each other. Is this true? Does this actually matter?

Staying anonymous fertilised quite a few myths, and that was part of the original idea. I work alone. I’ve met people who told me they knew who the author is and that it’s a group of people because a single person wouldn’t be able to draw that many cats. I’ve also heard that the author is a female art academy student or a group of foreign artists.

I’ve seen some ripoffs if you could call them that, and they make me happy. One must really love (or hate) the idea to decide to break the law because of this tag. I salute that, and I invite everyone to join. The more, the merrier.

I think the biggest fans so far are the people that went the extra mile to draw guns pointed at the cats. Also, those that attacked the cats with red paint, leaving marks on the foreheads. I tried starting a dialogue by turning the red dot into a romantic heart, but I never heard back. 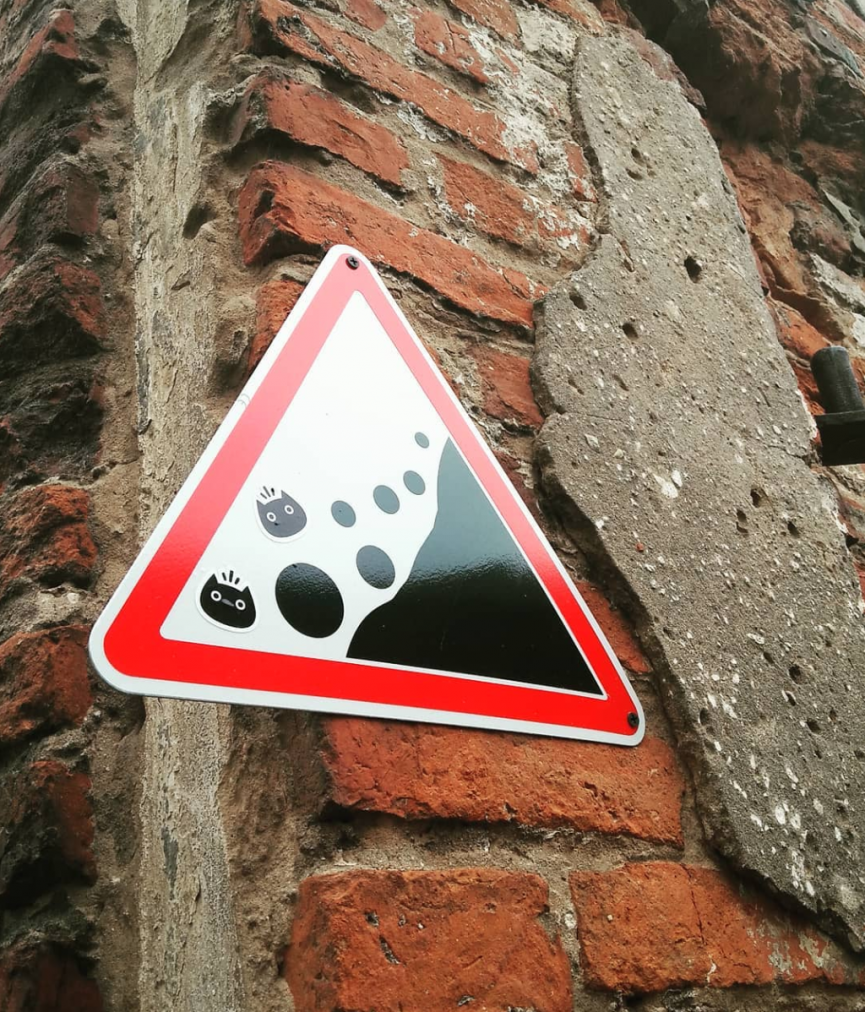 There are several messages. First, the cats on unexpected surfaces surprise you, they also lift your mood when you’re waiting for a bus or when you’re not having the best day. Some of the people think the cats are sleeping, but in fact, they’re just resting, letting you know it’s all good.

Another reason for the cats, since day one, is an alternative to outdoor advertising. Just to fight back some of the public space, as well as public attention. 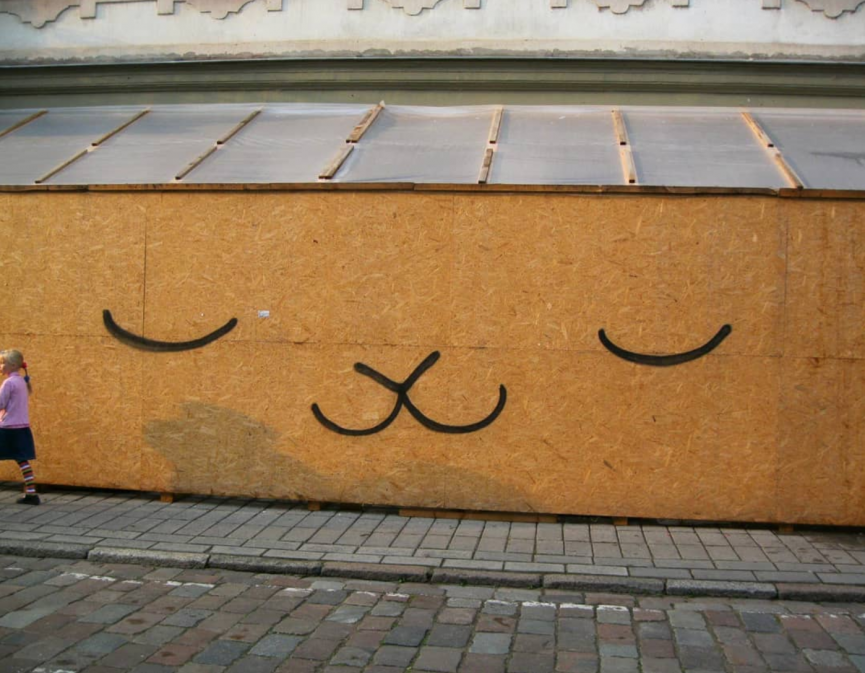 Have you heard any negative criticism?

When the cats appeared on recycling containers at the Town Hall Square, the picture made it to the Facebook page of a local website. Some of the comments were quite interesting, it’s a pity I didn’t save them. As far as I can remember, there were suggestions to chop my hands off and break my neck.

The cats have been spotted in London. How are they doing there?

Not only in London! They do like to travel. In fact, I am currently working on a cat adventure colouring book. Something like connecting the dots and finding the differences, for kids of all ages. 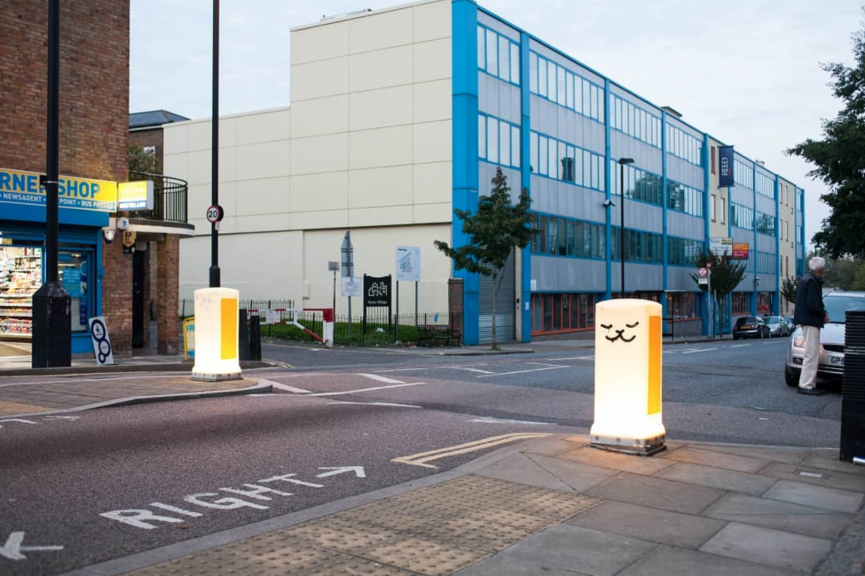 The biggest fans of the idea have even tattoed the cats. We know four of those! What about you?

That’s pretty rad, right? I know three so far, so you must show me the fourth – I’d love to send them some presents.

It’s a great accomplishment, and a reassurance someone actually cares about the cats. Kind words reach me through friends or through the Streets of Kaunas Facebook group. One of the nicer wishes was for the cat to appear at the Yard Gallery.

This is why I have launched the Instagram profile – everyone can contact the cats directly now. I’ve already received some beautiful pictures and some messages from foreigners expressing their love for Kaunas and thanking the cats for reminding them of the city. 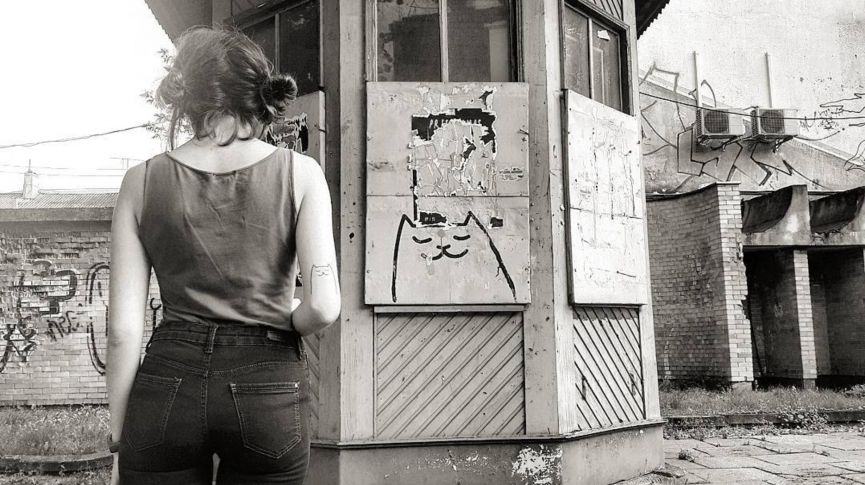 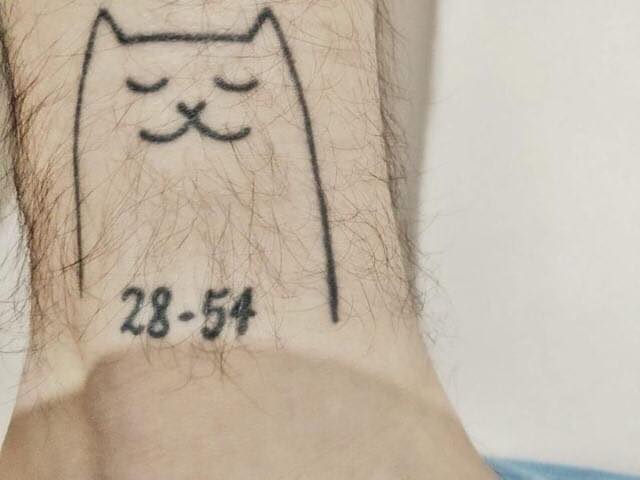 The cats have become the symbol of the Kaunastic street art map, as well as a pin one can get at the tourist information centre. What do you think about that?

I think it’s an important recognition and a sign that those responsible for city branding have become more creative and loosened up a little bit. Would any other city be brave enough to do that? Cheers, Kaunas! I also hope the source of the symbol won’t be forgotten and the street art of Kaunas will be rewarded.