Welcome to the 150+ years of Vytautas Avenue

Vytautas Avenue was one of the locations of HBO’s Chernobyl and is the central axis of this year’s Kaunas Biennial. Time to discover its history... 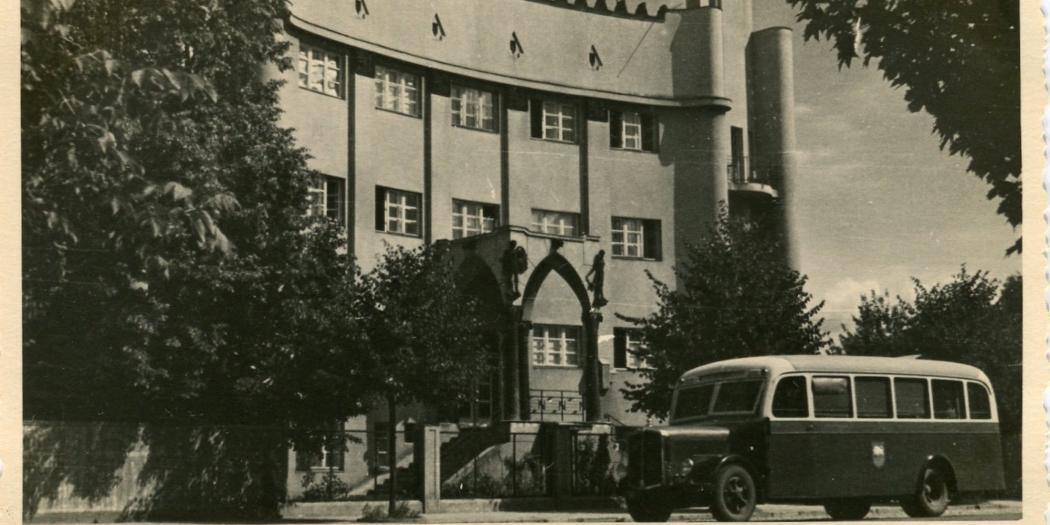 As Vytautas Avenue was one of the locations of HBO’s Chernobyl and is the central axis of this year’s Kaunas Biennial, we’re thrilled to invite you to a historical journey through the 150-year-old street, brilliantly put together by the Kaunas-based historian Arvydas Pakštalis. The article was published in the June 2019 edition of Kaunas Full of Culture magazine. You can find its PDF version here.

The designers of Mikhail Avenue at the time (now Vytauto, named after Vytautas the Great (1344–1430), one of the greatest leaders of Lithuania of all times) couldn’t even imagine that one day it will have to ‘perform’ in a TV show Chernobyl produced by HBO in 2019. The avenue designed over 150 years ago was transformed into Moscow Street and the house no. 58 was the place where Dr Valery Legasov, played by actor Jared Harris, spent his last days. Although it was the mid-19th century, Kaunas urban planners had an essential role in mind for Mikhail Avenue. 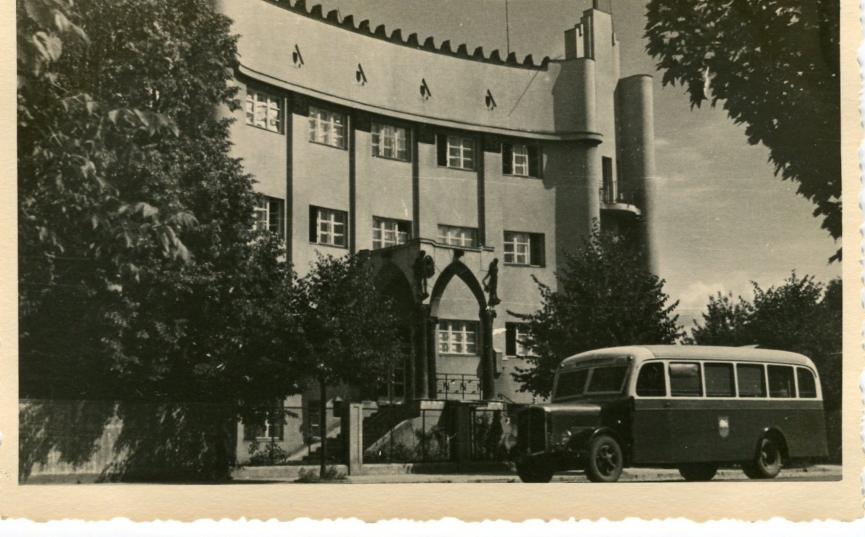 In 1843, when Kaunas became the centre of the newly formed governorate of the Russian Empire, urban development planning began. Under the approved New plan project in 1847, the city centre with new well-formed quarters and the rectangular street network was designed in the territory of Carmelite Monastery jurisdiction and previously empty lots. The newly shaped Rumšiškių Street and the future Mikhail Avenue marked the border of Kaunas territory on the eastern side of the city.

The project changed somewhat in the course of the implementation of the New plan and in the mid-19th century it was decided to turn the Rumšiškių Street into a boulevard. It was planned that the boulevard with two rows of trees on the sides will start at the Carmelite Church and will continue on Rumšiškių Street all the way up to Žaliakalnis. However, this idea was probably corrected by the railway built in Kaunas. Nikolai Avenue (now Laisvės alėja) was turned into a boulevard instead, and Rumšiškių Street was turned into Mikhail Avenue, becoming a significant artery connecting the city with the railway station.

In 1889, Kaunas rabbi Isaac Elhanan Spector was visited by British-Jewish lawyer Elkan Nathan Adler. When he arrived at the railway station early in the morning, he found the place tidy but dull. “Only a few people around and none of them speak German. Two Russian words that made up my vocabulary had to be used constantly to enable me to reach my destination. Neither carriages nor Jews could be seen.” The traveller concluded that it was too early for carriages, and all the Jews, in general, had to be in the synagogues at the time (according to him there were 25 of them in Kaunas) and thus he decided to walk to the centre. “But it seemed that every Christian I met on the way – be it Greek or Roman – recognized the words ‘Staro Rabben’ and pointed westward. And I walked for about an hour on a straight highway leading through the suburb. Bees were buzzing in the air and flowers blooming on the side of the road. People were walking joyfully to the city, and the suburban houses looked comfortable and prosperous.”

In 1930s Kaunas, most of the public announcements and street names were written in three local languages - Lithuanian, Polish and Yiddish. You can learn more about it by visiting an exhibition 'Kauno (Ne)laikinumai (The (Non)Temporalities of Kaunas)' currently open at the Kaunas City Museum Town Hall branch. Archive of the National M. K. Čiurlionis Art Museum.

The horse-drawn tram started operating from Kaunas railway station to the Old Town in 1892 and locals quickly named it 'konkė'. The first buses in town appeared in 1909. In the press of the time they were simply referred to as cars, “Two cars have recently started going in Kaunas: one from the railway station to the public square and the second one from the station to the Green Hill. So many people take it on the weekends that they barely all fit.” However, due to the poor condition of the streets, the buses ran irregularly. In 1910, one of the bus owners, Marija Goločeva called for the City Council to build a separate road for cars on Mikhail Avenue because the spring floods had damaged it so much that it was impossible to drive; therefore, she was no longer able to run her buses. The local authorities, although acknowledging the importance of developing such a connection, probably influenced by the interests of the 'konkė' owner, found many reasons not to build a new road. There were fears about horses coming from the villages, which, not having been acquainted with buses, could get easily frightened and cause an accident. It was also taken into consideration that large crowds were flooding the streets after the Mass on the weekends and students were walking between the street and drainage furrows on weekdays. If the new road were built, the buses would come too close to them, thus increasing the chance of accidents. Because of that, buses had disappeared not only from Mikhail Avenue but also from Kaunas for some time.

Under the plan drafted in 1847, a place for Catholic, Orthodox, Evangelical-Lutheran, and Tartar (Muslim) cemetery was designated in the eastern side of Mikhail Avenue. Recalling the Kaunas of the late 19th century, Felicija Bortkevičienė said that at the time it felt as if the railway station was located far away from the city and when the passengers had to be taken to the station, the coachmen would agree to travel in twos because, in the forest, where the cemetery was located, people were often attacked by robbers. In 1959 the Soviet government, trying to curb the anti-Soviet unrest in Kaunas, moved the cemetery and turned the territory into a park.

During the interwar period, the cultural life in this area intensified because the Germans of Kaunas had built a mathematics-oriented school in 1923 (currently A. Puškinas High School), which gained the status of a high school in 1930. Russian high school (now Kaunas Pedagogical Qualification Center) emerged on the Orthodox-owned plot of land in 1925 and ten years after that the Orthodox church of revelation was built on the same plot. In 1930, the Tartars of Kaunas, with the help of local authorities, built “a new mosque instead of the old one which was built in 1906 by Tartar Didžturtis Iliasevičius, the owner of the once famous Turkish bakery in Kaunas.” Nearby, on the other side of the avenue, Polish Adomas Mickevičius High School (now Steponas Darius and Stasys Girėnas High School) had settled in a newly constructed building in 1931. 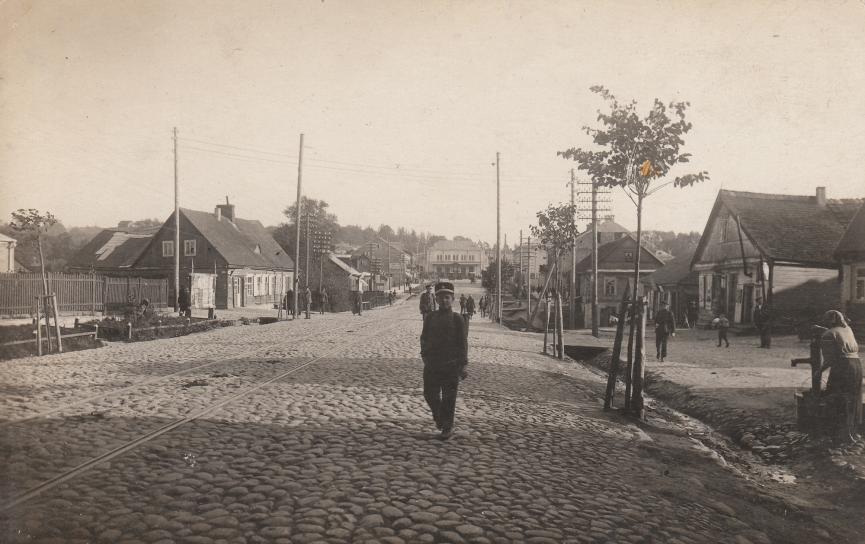 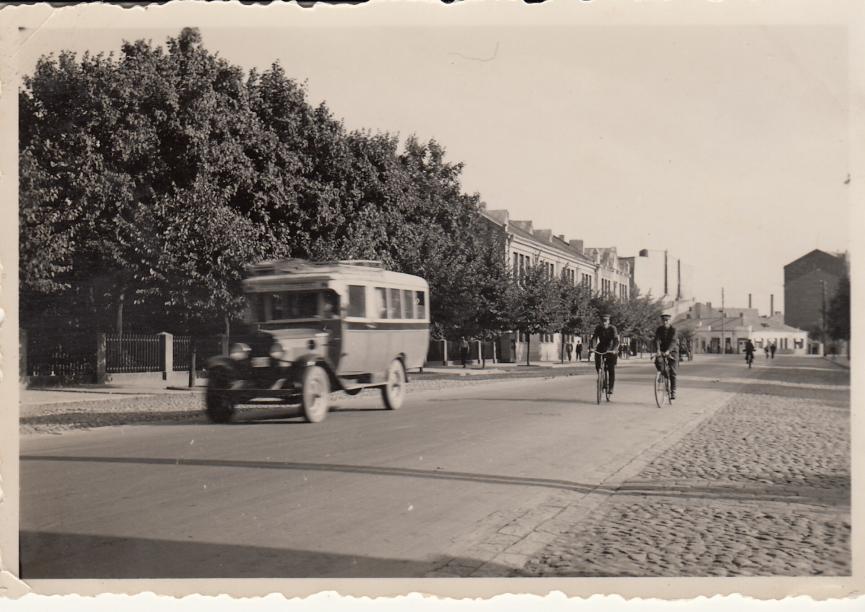 During the WWI Mikhail Avenue was renamed into Deutscher Ringstrasse, and in 1919 it was given the name of Vytautas. Despite the noble name of the avenue, for a long time, it was one of the most unkept streets of Kaunas. In 1932 there were complains that “Vytautas Avenue is probably the most derelict street in Kaunas. The cobble-stoned road is full of pits, the trenches have been full of some kind of sludge and trash for a few years now, and nobody cleans it. The pavements have a few meters of some worn-down planks, but mostly there aren’t any. If it’s wet, you will be drenched in mud by the time you reach the station … Any foreigner visiting Kaunas first sees the disarray while driving through Vytautas Avenue. In fact, when you see the street mentioned above, you think that it is anything but Kaunas.” Until that time, Vytautas Avenue continued only till the junction with Laisvės alėja, and after that, the street was called Donelaičio. In 1923 it was decided to extend the avenue till Parodos hill, but it was only fixed adequately in the early 1930s when one asphalt strip was laid in the middle of the avenue. In 1933, the journalists made funny remarks, “Once I heard a man from Suvalkija who was driving a car, say to his wife that Vytautas the Great himself would love driving on this road.”

Due to the railway and bus stations located in the vicinity of Vytautas Avenue, it is often called the Kaunas gate to Europe. As Paulius Tautvydas Laurinaitis observes, “the avenue witnessed both solemn greetings of the arriving guests and mourning processions; it saw the people who were being exiled and the Jewish people taken to labour camps by Nazis ... Kaunas cultural layer of the past century and a half is hiding here ... and like no other it reflects the Kaunas of today: although it is still looking for its role, it will always remain important because of its location.”