There are quite a few places to visit and remember in Kaunas connected to the Holocaust and the Jewish history in the city. 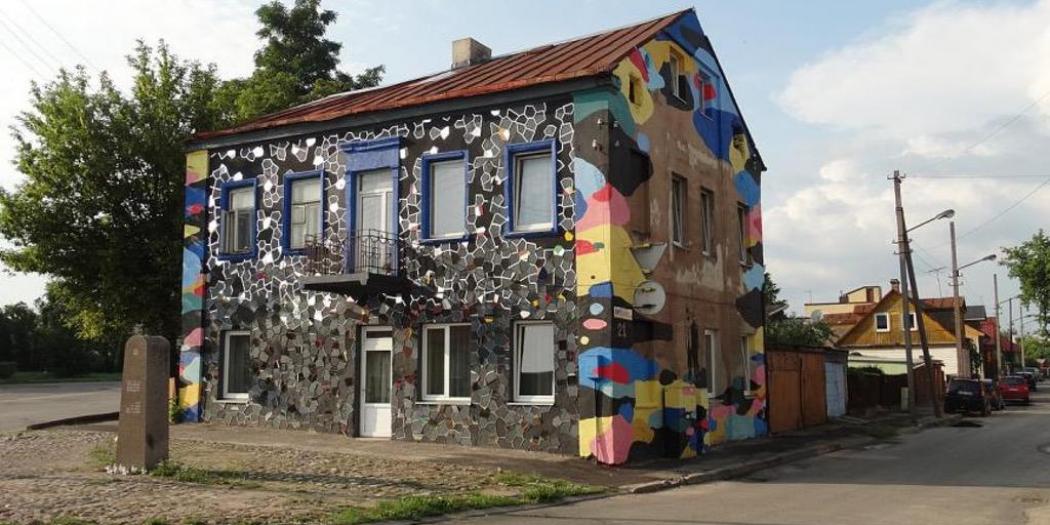 Approximately 37 000 Jews lived in Kaunas before the WW2. Only around 3 000 of them survived the Holocaust.

On 27 January 1945, Auschwitz-Birkenau, the largest Nazi concentration and death camp, was liberated. Thus, 27 January is International Holocaust Remembrance Day commemorating the tragedy of the Holocaust that occurred during the Second World War. It marks the genocide that resulted in the deaths of 6 million Jews and 11 million others, by the Nazi regime and its collaborators.

This year, traditional memorial services and events are not to be held due to the worldwide pandemics. Nevertheless, it’s always a good time to remember and contemplate; and pay tribute to the victims by visiting the historical sites – even if only virtually.

For historical reasons, there are quite a few places to visit and remember in Kaunas connected to the Holocaust and the Jewish history in the city. These include memorials and locations of suffering, also places inspiring hope and spreading light.

The Kaunas Ghetto in the Slabodka district, a neighbourhood inhabited by Jews for many centuries, was officially established on 15 August 1941, a couple of months after the Kaunas pogrom during which more than 3000 people were killed. The ghetto was turned into a concentration camp in Autumn 1943. It was burned in July 1944. Around 5 000 people were transferred to concentration camps, and only a few hundred managed to escape. It was one of the longest-running ghettos in Lithuania. It was also the most photographed one in Europe. The archives of the Kaunas ghetto Jewish police are kept in the Central State Archive of Lithuania.

In 2018, Vytenis Jakas, a Kaunas-based artist and founder of the famous Yard Gallery (more below), presented an idea of artistic intervention to add some positive emotional connotations to the former ghetto territory, as well as emphasise the meaning of the Lithuanian point of view to the importance of Jewish cultural and historical legacy. He decorated a building by the former ghetto gate with pieces of mirror. 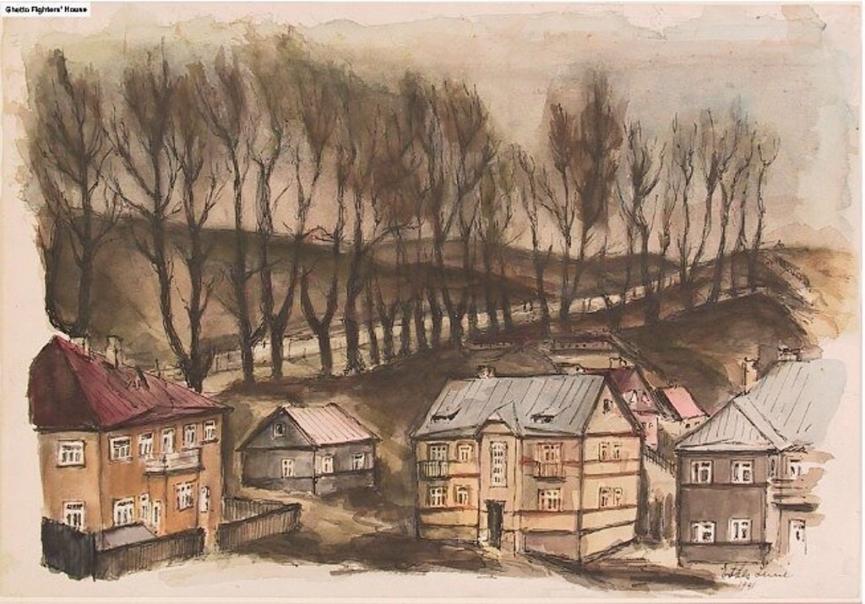 Kaunas Ghetto. Drawing by Esther Lurie, prisoner of the ghetto. 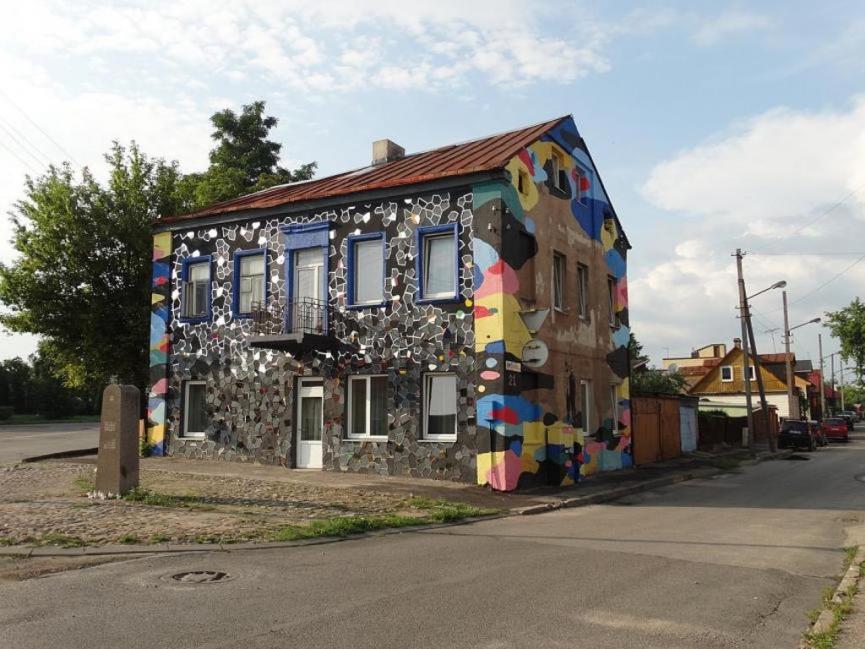 This fort is the only one within the Kaunas fortress network (Tzar ordered to build it in the 19th century) that never witnessed any military action. During the Nazi occupation, it was the first concentration camp on Lithuanian soil. More than 5 000 Jews were killed here. Today, the fort is home to a nongovernmental education institution. In 2016, a new memorial for Holocaust victims was erected here. 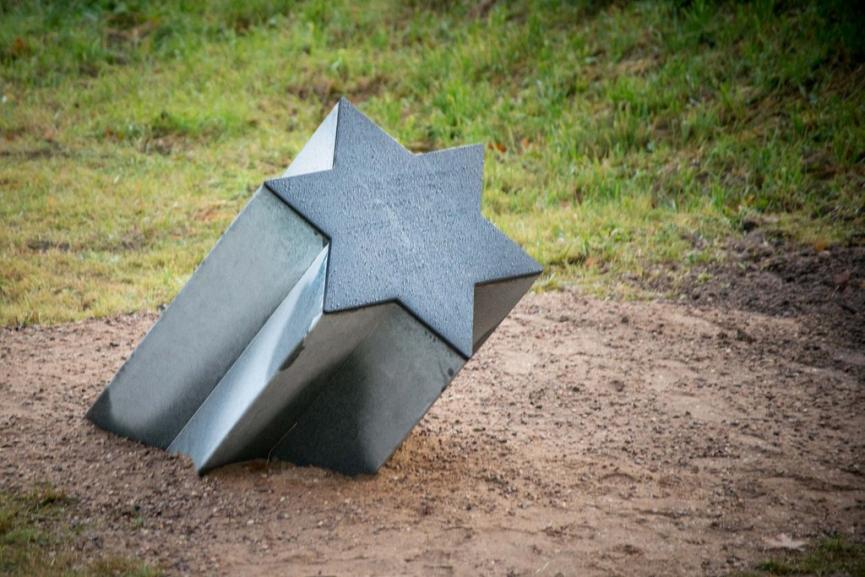 Memorial at the 7th Fort. Photo by Kaunas City Municipality

The gigantic monument by Alfonsas Vincentas Ambraziūnas, Gediminas Baravykas and Vytautas Vielius, erected some 30 years ago, is one of the most awe-inspiring landmarks of Kaunas – and a reminder of all the blood that was spilt here. Before WW2, the Ninth Fort of the Kaunas Fortress was used as a jail. Later, thousands of Jews were killed here, coming from local vicinities and transported in from other countries occupied by Nazi Germany. There is also a museum presenting the painful chapters of this period of history open here. 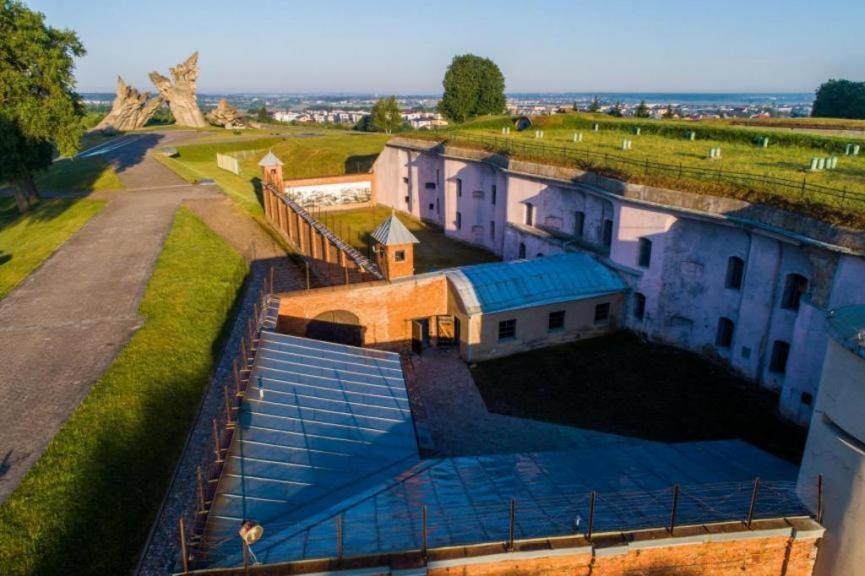 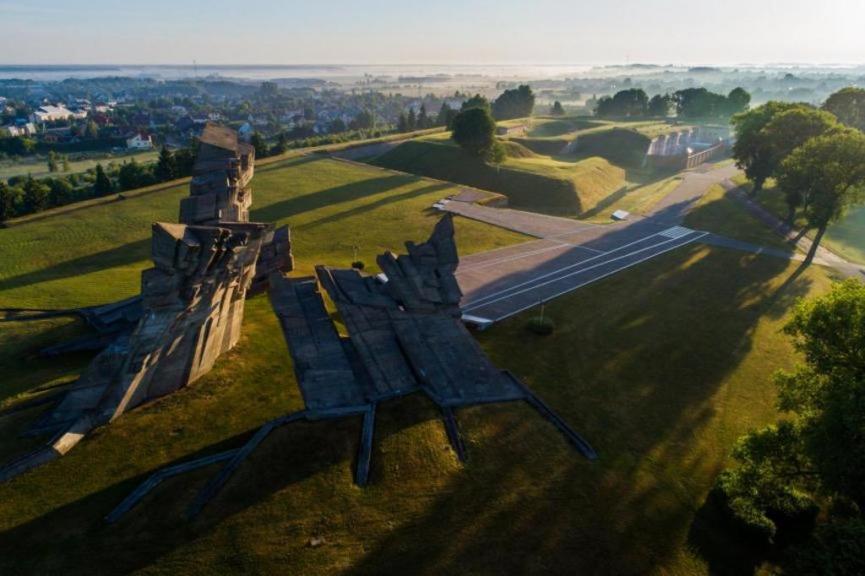 The 9th fort. Photos by Unseen Pictures / Kaunas IN


Squeezed between the Aleksotas slope and “Kauno grūdai” factory, this is the only active Jewish cemetery in Kaunas today. Remains were transferred here from the Ghetto cemetery in Vilijampolė in 1978. 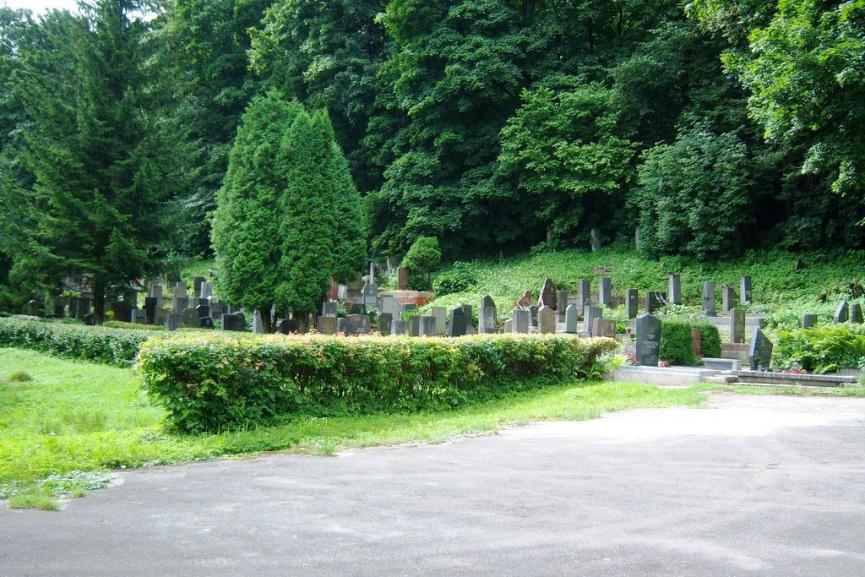 In 1940, a businessman Jan Zwanterdijk was appointed the honorary consul of the Netherlands, and the consulate began operating from the office of PHILIPS company. In the summer of 1940, he wrote up over 2400 de facto visas to Curaçao and saved thousands of Jewish refugees by helping them escape the country. He asked the Japanese Consul Chiune Sugihara to sign Japanese transit visas to people he had, and this is where the Sugihara chapter of the story begins (see below). The Righteous Among the Nations was posthumously bestowed on Zwartendijk in 1997. In 2018, Zwartendijk’s children and Willem-Alexander of the Netherlands opened a memorial in front of the former consulate. The author of the light installation funded by public and private institutions in Lithuania and the Netherlands is a Dutch artist Giny Vos. 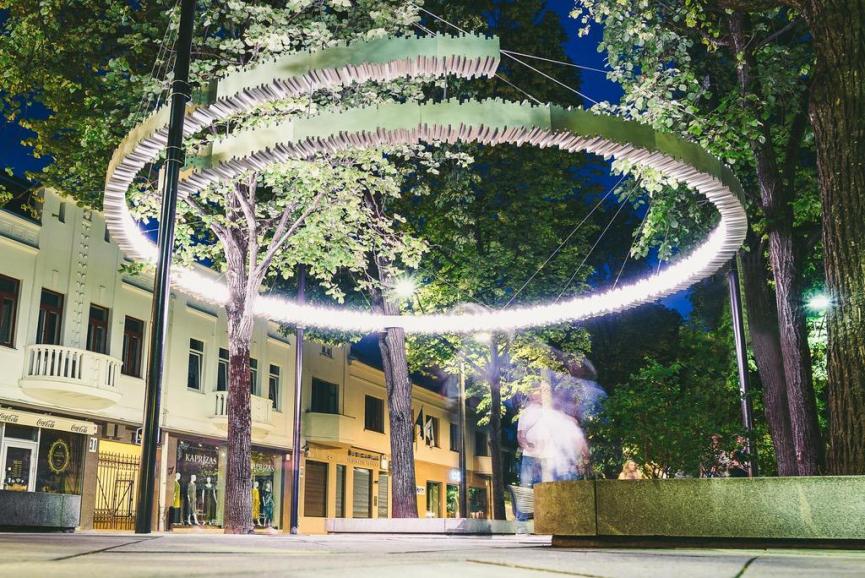 The modernist villa in Žaliakalnis attracts thousands of Japanese and Israeli visitors every year. This is where the Japanese diplomat Chiune Sugihara resided and issued life visas for Jewish refugees, and together with Dutch diplomat Jan Zwartendijk, he saved thousands of lives. Today, the house is a small museum that tells the story of Sugihara. 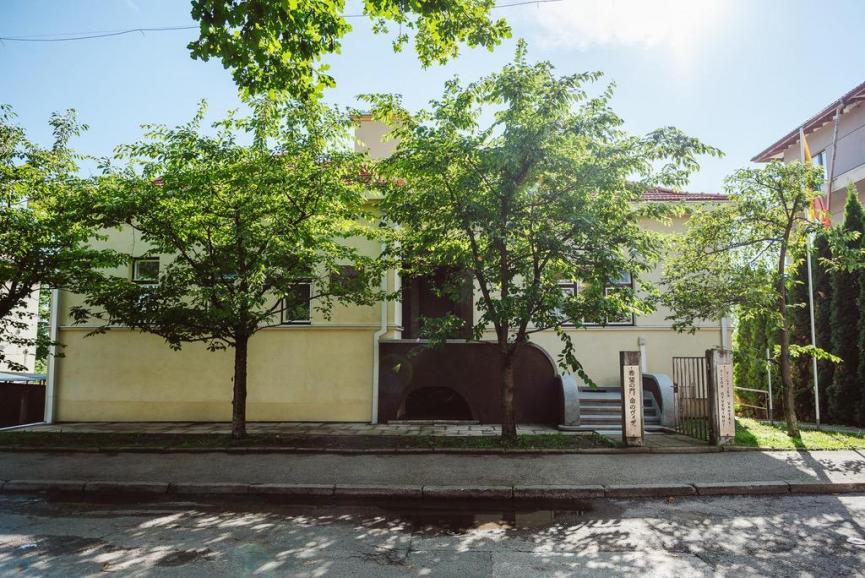 As the Japanese Consulate was closed due to the first Soviet occupation, Sugihara moved to the Metropolis Hotel and continued to sign life visas. The hotel continues to operate today; in 2019, a statue representing the deed of Sugihara (author Martynas Gaubas) was opened in front of it. 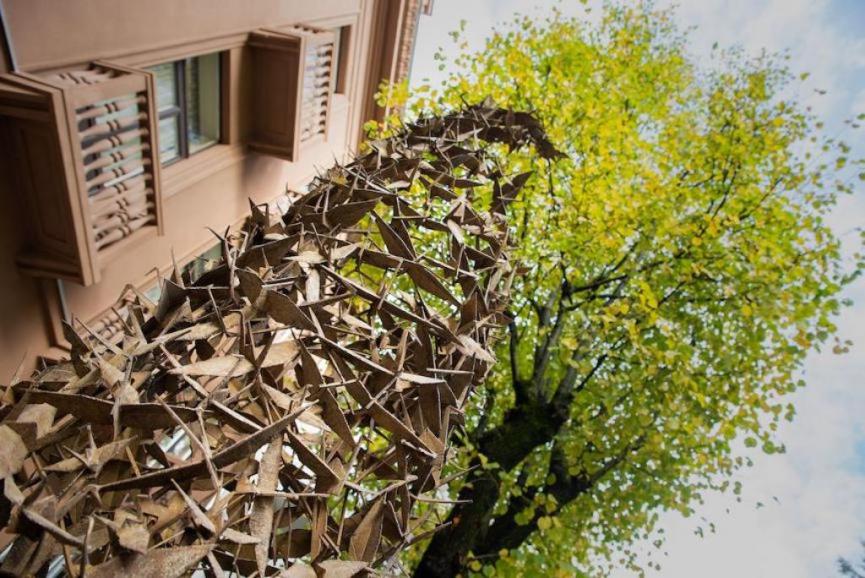 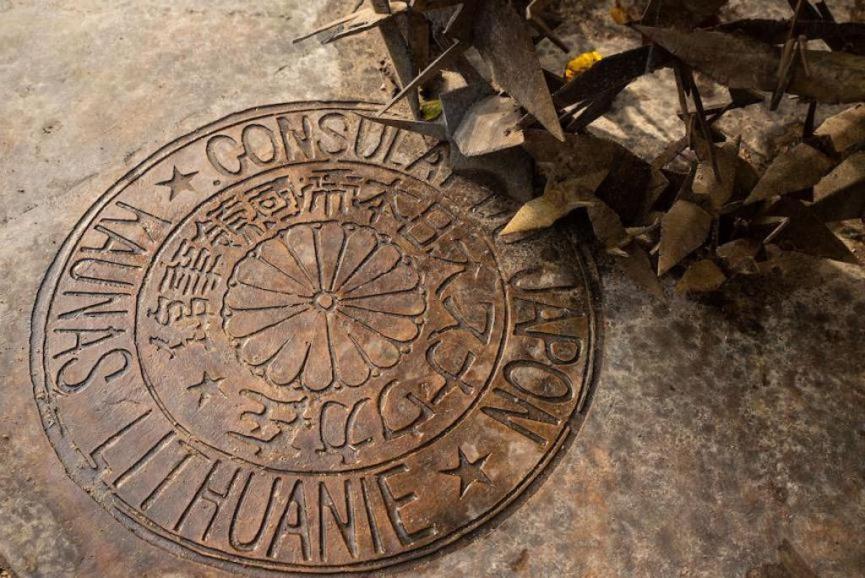 Established by the abovementioned artist Vytenis Jakas, and always being added to and developed. Jakas moved into the courtyard more than a decade ago, and through a series of artistic projects, helped his neighbours reconnect with their shared local courtyard history. A vital part of this reconnection was transferring photographs of the Jewish families – who had previously lived here – onto the courtyard walls. It’s open 24/7, but please be respectful to the residents. 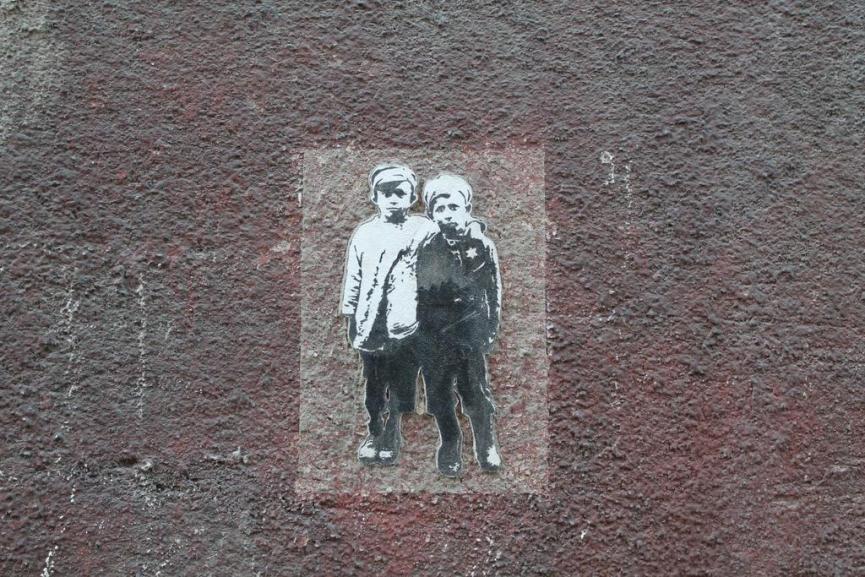 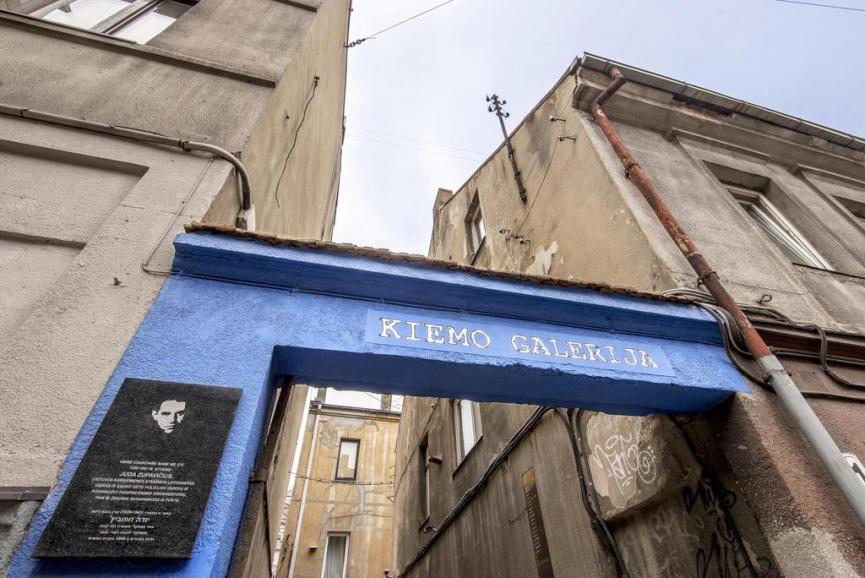 We have published a few maps telling more about Jewish history and legacy in Kaunas. Check out the Litvak Landscape and the Litvaks of Slobodka, as well as the Sugihara Route that tells more about the people that saved Jews in Kaunas and the places connected to them.