The house of Juozas Daugirdas, director of the “Drobė” corporation, was one of the most modern buildings in Lithuania and held to be a jewel of Vytauto Blvd at the start of the 1930s. Its first floor was dedicated for shops; the second, third, and fourth had two identical five-room apartments, with living quarters in the mezzanine as well. The portal is ornamented with a rim of Dubeneckis’ beloved tulips. In 1934-1935 the French Consul Paul Py stayed in this house. Year: 1930–1931. Style: Modernism. Architect Vladimiras Dubeneckis. 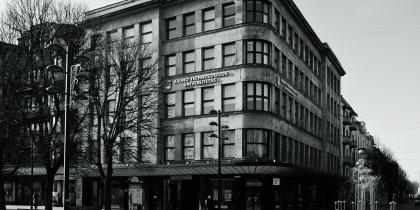