East, West and the Cosmic Energy in old Kaunas

How much do you know about theosophy, an esoteric belief prevalent at the end of the 19th century and early 20th century? It was a thing in Kaunas! The article by Agnė Abromaitytė was originally published in the August edition of Kaunas Full of Culture magazine. Browse the whole issue here.

It is 1932. A warm August day, noon. In a quick pace, you are walking through Laisvės Avenue towards Konradas’ cafe. You can’t wait to share coffee and some news with a couple of your friends. You step through the door and notice the bustle: the waiters move about hurriedly, wine corks are popping, the plates are lining up on the table. Gudaitis is passionately discussing something with Petrėnas, you nod to Galaunė; Herbačiauskas sitting a bit further away is sipping 60-cent black coffee, Kirša is marking something on paper, bored ladies of Kaunas are sitting in a thick cloud of cigarette smoke, traditionally armed with coffee, cakes and a new yo-yo toy that just came from Paris.

Not even a single free table, damn it! At the bar, you notice a slightly opened door and behind it a half-empty room. You boldly move towards it, but the chief waiter stops your way, “Sorry, sir, but this room is for the private Theosophical circle only.”

Theosophy was an esoteric belief prevalent at the end of the 19th century and early 20th century. It, however, dates back to much earlier time: it is said that theosophists existed well before the Christian era - both in the Ptolemaic dynasty and in ancient Alexandria. But the foundations of the era which has gained the most attention were laid by Russian-born scientist and philosopher Helena Blavatsky, who founded the Theosophical Society in New York in 1875.

The main pillar of the theosophical faith is pure truth, which is to be discovered in the synthesis of various religions. Much importance is attached to the human spirit and empirical senses, and it is believed that the connection with God can be discovered with one’s own strength – through forms of practice, intuition, contemplation, and meditation. There is no supreme teacher in Theosophy, Buddha, Krishna, Mithra, and Christ come together – it is left to the believer to decide whether to follow one or all of them.

It is quite curious to realize that this archaic, mystical and exotic-sounding faith spread throughout interwar Lithuania. However, it is worth remembering that the provisional capital kept pace with all the European standards and all the winds of fashion were successfully turning our windmills. The rudiments of Theosophy were brought to Kaunas from Paris by opera singer Marijona Rakauskaitė, who worked as a lawyer’s secretary in the big city. After returning to Kaunas, she soon became friends with one of the city’s creme de la creme members, writer, and literary critic Juozapas Herbačiauskas, who was personally interested in various mystical phenomena, esotericism, and Eastern philosophy, so the rays of Theosophy also caught Herbačiauskas’ eye. 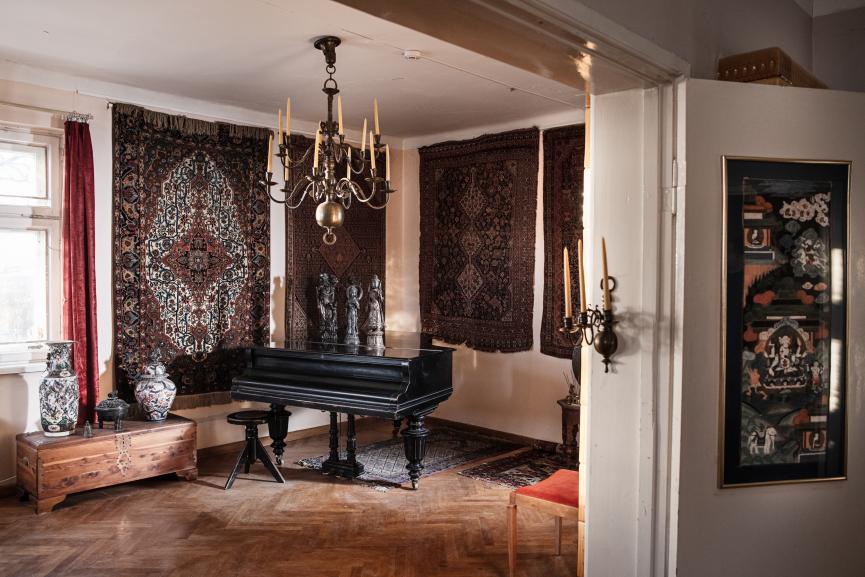 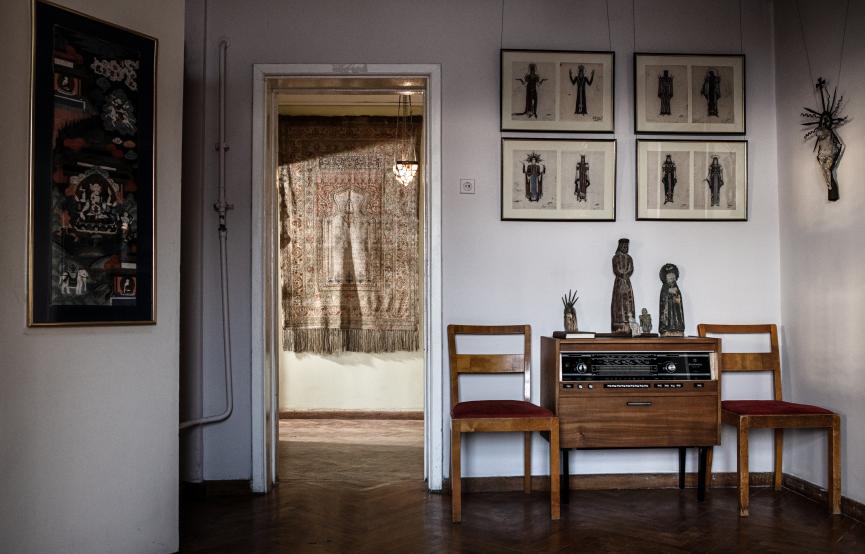 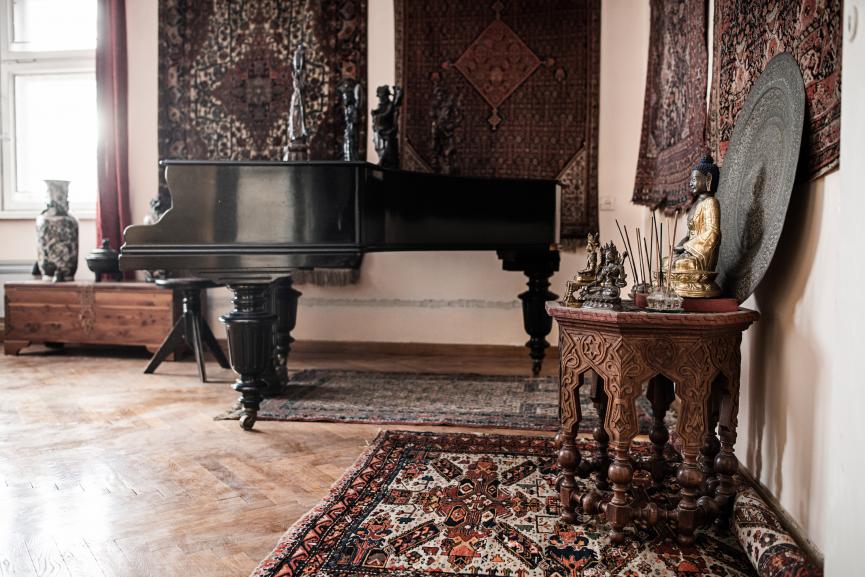 Located in Žaliakalnis, the House of L. Truikys and M. Rakauskaitė is currently the department of M. K. Čiurlionis National Museum of Art. Yes, you can visit it! Photos by Dainius Ščiuka.

Quite a few legends about Herbačiauskas’ abilities are still floating around. The favourite of Kaunas ladies at the time was popular for various reasons, but everyone who knew him said that the writer had the power of hypnosis.

For example, Herbačiauskas is sitting in the corner at some party, quite dismal. He tilts his head back, says something ironic and suddenly disappears. As if with a click of a finger, he leaves himself, stops reacting to his surroundings or people talking to him. It is said that this would take about 15 minutes, then he would return to a conscious state.

One student of the writer once said that when the daughters of noble and wealthy Lithuanian families one by one started succumbing to the fate of ‘white slaves’ (‘white slaves’ are girls from very good families, with good education and therefore fit for high-class prostitution. They would be kidnapped and shipped to South America and other parts of the world), professor Herbačiauskas would teach that if they got in trouble, they should focus and try to get in touch with him via their thoughts. So, when one unlucky girl had fallen into the hands of these merchants, they locked her behind three doors and put three men to guard her. Upon realizing that there is no way out because nobody – neither her parents nor friends – knew where she was, the girl remembered Herbačiauskas’ teaching. She conjured up the teacher’s face in her mind, and after focusing her thoughts started to call for help. After recollecting herself, she saw that the door was open. Not one, but all three, and all the guards were simply asleep. That is how the girl escaped and people who were with Herbačiauskas at the time testified to his 15-minute withdrawal.

Another major cultivator of Theosophy was Vydūnas, who was interested in various Eastern philosophies, read the Eastern scriptures, Blavatsky’s texts and Bhagavad Gita (one of the most important Hindu religious texts) that he was translating at the time. At Telšiai Gymnasium, Vydūnas peculiarly and indirectly was teaching his students (among them was Liudas Truikys) how to understand Theosophy. He would take them outside and teach them how to observe nature. He combined Eastern wisdom and foreign teaching with the importance of Lithuanian origin.

Truikys actively integrated Vydūnas’ teachings into his daily routine and perception of the world. Once, the scenographer asked Vydūnas how could he understand the meaning of his birth (this specific one, because Truikys strongly believed in reincarnation) and Vydūnas answered, “You are a great man, Liudas, a very talented one, yet distracted. If you want to justify your birth, it is enough for you to put your feet on the ground each morning you wake up. This will be the first word in your prayer. All activities of the day must be like a prayer, as a justification of your birth. How you use your creative powers is one word of prayer, how you eat - another, and how you talk to people yet another. As you lie down in the evening, consider how your daily prayer was, whether it was fitting of God.” 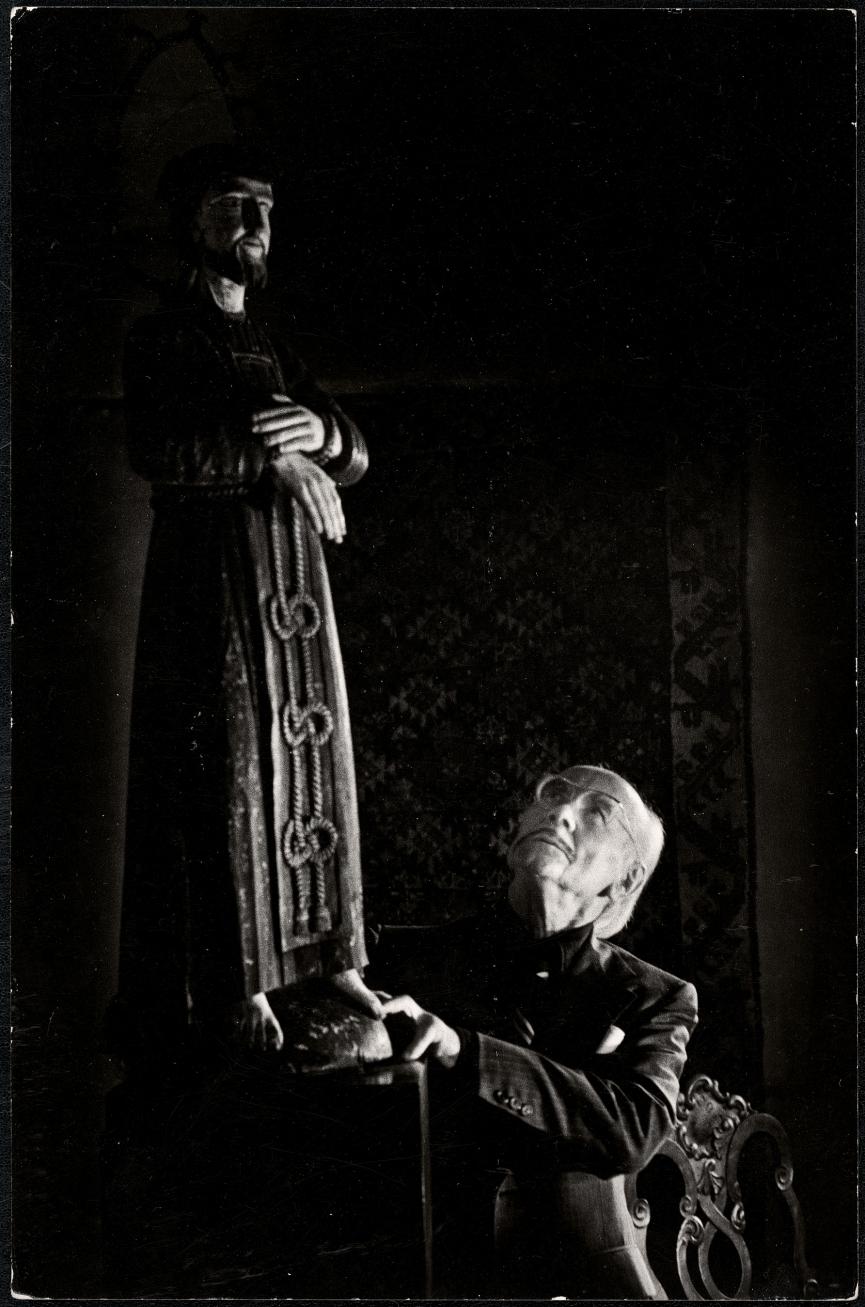 Initiated by the doctor Nadežda Serafinienė, the official Roerich Theosophical Society was established in Kaunas, in 1935. Kaunas singer and actress Julija Dvarionaitė-Montvydienė was suggested to lead the society. She was assisted by artists Petras and Domicelė Tarabilda, Truikys, Rakauskaitė, and Herbačiauskas. Theosophy fashion was spreading in the speed of light, with the help of Roerichians, the Agni Yoga Societies and on its own accord – during afternoon teas and visits. But of course, the theosophical circle in the temporary capital was not very wide. Although the interest was immense, theosophists were very selective in their choice of new members. The members of the group realized that pure faith could not come from the desire to follow fashion, so all the bored Kaunas ladies and young students were filtered out. To be a theosophist, first and foremost, meant to be educated. Secret knowledge was passed only to a strong person who was mentally and psychologically prepared.

Truikys would tell his students who really wanted to be theosophists, “You have to grow up for that. Not only the matters of your spirit and soul must be strong but the mind itself.” He even advised some not to read Blavatsky’s texts. There was a case when one student, who ignored the teacher’s warnings and tried to deepen her knowledge of Theosophy on her own, broke down, went completely mad and ended her days in a psychiatric hospital.

Another reason was, of course, the high risk during the Soviet period. Because of that, theosophists often gathered not only in Kondradas’ cafe’s little room but also in the homes of the society’s members. Truikys was traditionally visited by three trusted and loyal people at a time. Strong black jasmine blossom tea would be steaming, incense burning and Truikys’ suggestive story or teaching could be heard. But for the things Truikys was saying, he was unequivocally threatened by mental asylum or prison. One interrogator had even once uttered to him, “There will be plenty of Siberia for all of you, vegetarians and theosophists.”

During the meetings of theosophists, the members would discuss and share knowledge, sensations, and realizations. Someone would read aloud a page from some scripture, then everyone would rethink what it might mean. During the interwar period, intellectuals spoke at least 3 languages – Lithuanian, French, German, Russian, and sometimes English. Most of the theosophical writings were in German, so those who spoke the language could explain texts to others.

A person who wanted to join the theosophists had to introduce himself to a member. They would communicate, go eat together or take a walk and the theosophist would observe whether the novice’s brain was working in the right speed. He/she would determine that from speech, manners, gesticulation even the timbre and loudness of the voice. The overall harmony of the person would show if he/she was to find himself in Theosophy. Sometimes the truth sought by a candidate could be offered by the church, so theosophists were trying to protect people’s consciousness from the flow of information because Theosophy is essentially the teaching of all religions.

By the way, when it comes to the church, the priests had plenty of work during the interwar period. During confessions, they would ask the gorgeous ladies if they were not, by any chance, interested in Theosophy, and after hearing a positive answer, they tried to suppress their curiosity with Hail Mary. Theosophists themselves had nothing against the institution of the church, they merely asserted that no religious path had the right to declare itself the only right one. According to them, there is one root from which all branches stem and none of the branches has the right to despise the root or the branch of one’s brother.

Such thinking is a large part of the teaching of Theosophy. The synthesis of faiths, religions, and cultures. This was clearly reflected in Truikys’ teachings – when he asked students what culture they were interested in and hearing the most exotic answers – Japan, China, and India, Truikys would not miss an opportunity to emphasize that Lithuanian art is our roots which we as personalities, use to anchor ourselves. And the rigmarole of branches depends on us and can be the most diverse.

The scenographer also maintained this synthesis in his own home: for example, guests were offered to touch a small 12th-15thcentury bronze sculpture from Tibet, which he kept on his desk and believed it was the source of energy that inspired people to create. And right there, in another room, the statue of a very Lithuanian Nazarene could be found, standing, as Truikys himself said, “on the centre of the universe.” That centre – under the sculpture – was where Truikys stored white wine for his guests. 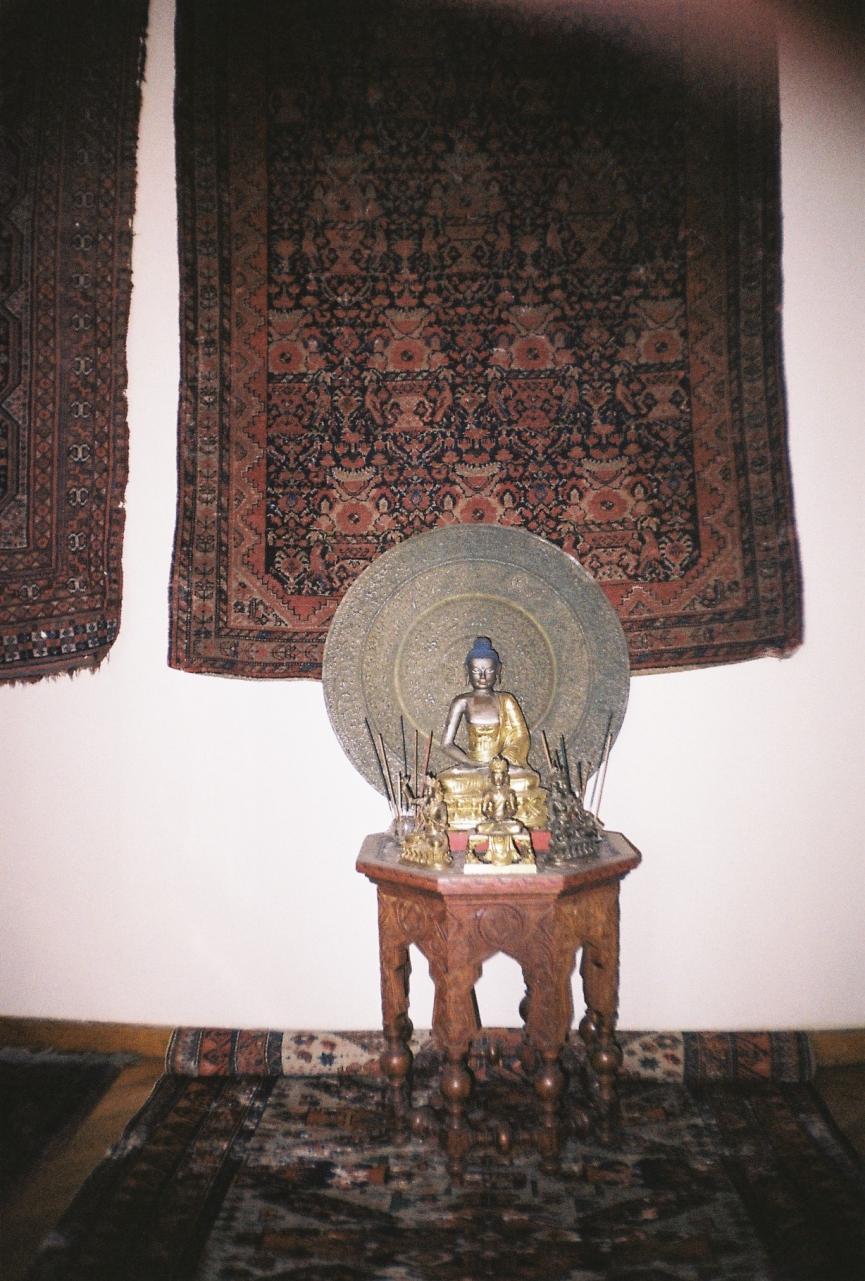 Kaunas raised its cultural bar sky-high almost a hundred years ago. Quite a nice fact was that it was the intelligentsia that dictated the fashion of the whole city. The residents of Kaunas were determined to read strange Oriental manuscripts that could have caused them to lose their minds. And I believe that more than one student, following Truikys’ example, would not draw their curtains at night for the blue moon and starlight to spread inside and in the form of creative energy help them get out of bed at 4 am.