Collaboration between talented artists, the Kaunas city municipality and building owners proved to be a successful formula. 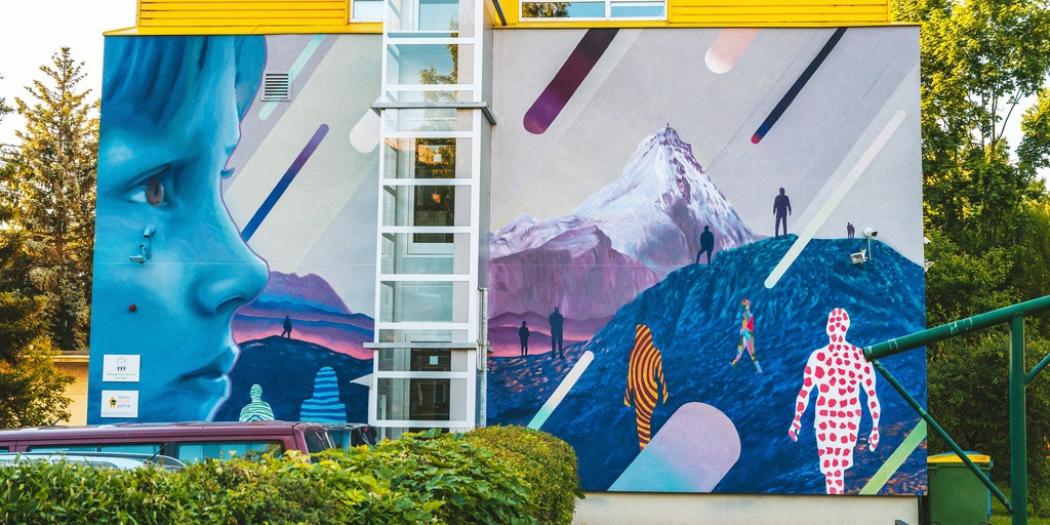 It took just a few years for Kaunas to become a street art city. It might seem like an ambitious statement, but collaboration between talented artists, the city municipality and building owners proved to be a successful formula. The less legal side of the subculture, graffiti and tagging, has been part of the urban face of Kaunas for decades; just recently, it became a renowned, appreciated and anticipated form of public art. Here are some of the most recent examples that appeared in Kaunas this Summer.

Kaunas — European Capital of Culture 2022, together with its main sponsor Švyturys Nealkoholinis, invited three renowned street artists to create new murals as presents for three of our city’s best-known, most-awarded and most-loved cultural institutions. The team have picked the art and culture magazine Nemunas (it has been published since 1967!), dance theatre Aura (established by choreographer Birutė Letukaitė in 1980) and Kaunas City Symphony orchestra, the youngest in the company – it has just celebrated its 16th birthday. The three murals were revealed for the Kaunas city birthday in May.

The mural for the orchestra, depicting a conductor on the move (A. Mickevičiaus St.), was done by Tadas Vincaitis-Plūgas, who’s way older than the orchestra – he did his first graffiti back in 1989. 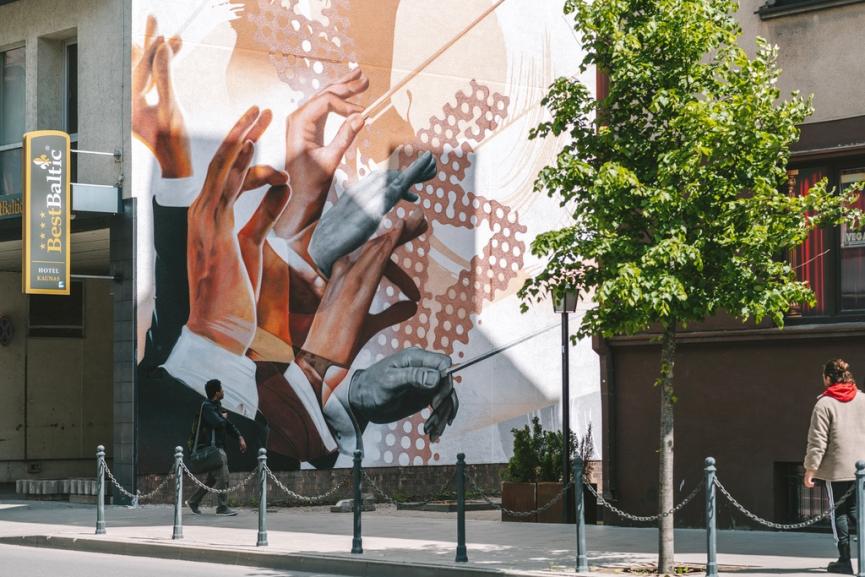 Aura – its French dancer Clara Giambino – was immortalised by Linas Kaziulionis, known for the 21st century Mona Lisa in the KTU campus and other witty drawings around town. Find the ‘Dance‘ on Nemuno St. 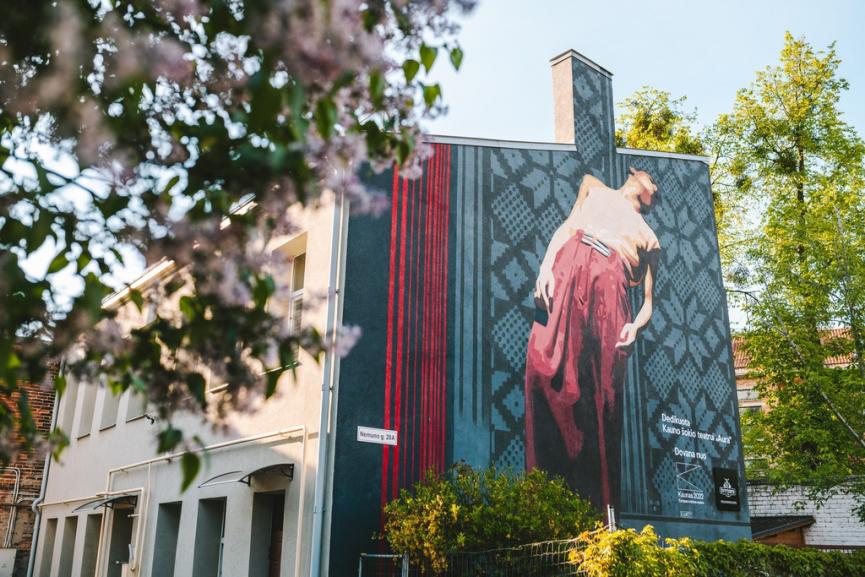 The legacy of Nemunas was interpreted by Karolis Grubis-Dėžutė, who placed a character he created himself, with a camera, on a magazine cover. The cover is surrounded by an editorial discussing the importance of art and artists in today’s world by the magazine’s editor-in-chief Erika Drungytė. The mural ‘Future‘ is best seen from Kęstučio St. and is near the National Kaunas Drama Theatre. 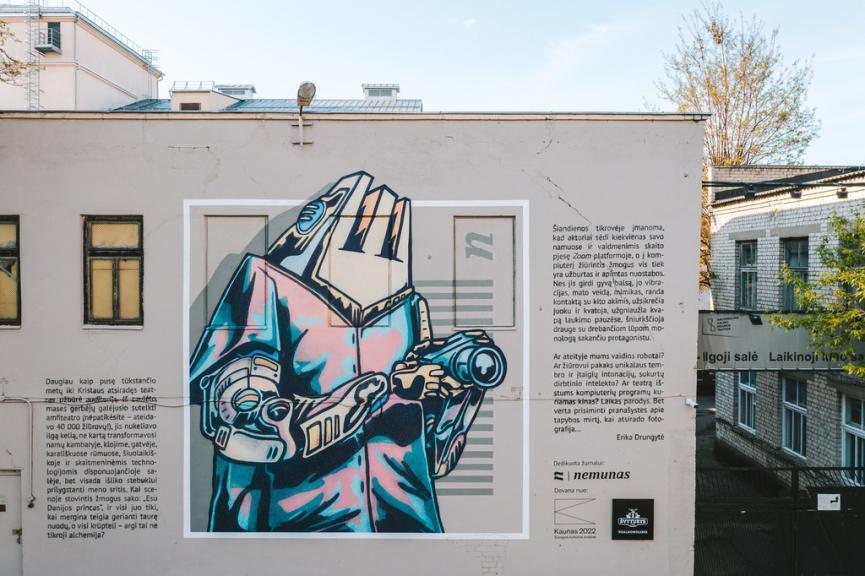 The location is often no less important than the drawing itself, and it can even suggest an idea for an artist passing by. Site-specific murals are a signature trend for Morfai, one of the busiest artists in Kaunas. His Star Seeder at the garden of Vytautas the Great War Museum, for example, only reveals its meaning at night! This year, Morfai noticed a tiny passage between an old building and a new one in Žaliakalnis, Ąžuolyno St. He popped a drawing on one of the almost-touching facades – a cut of a portrait, with the focus of an eye looking at you, asking, where you are going, or maybe just saying hi. 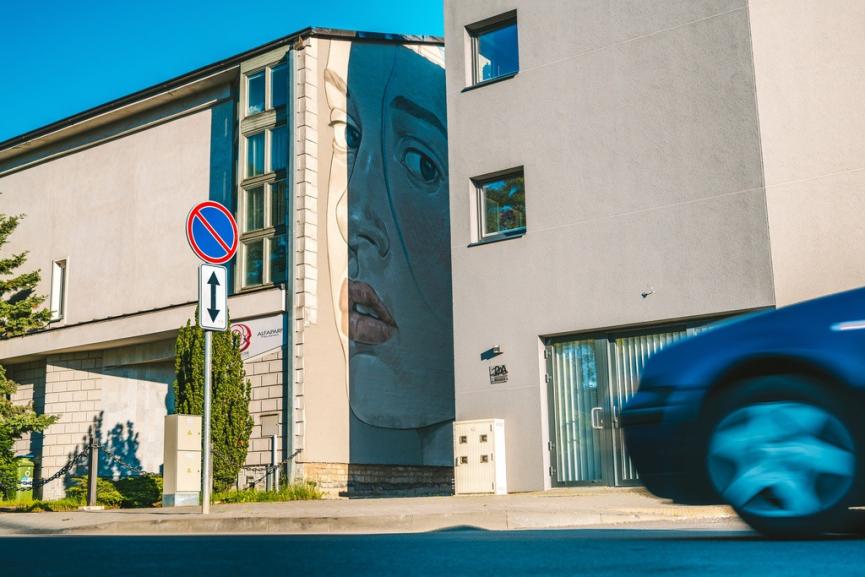 On June 1, the International Day for Protection of Children, a new mural popped up on the facade of children welfare centre “Pastogė” in Eiguliai microdistrict of Kaunas (P. Plechavičiaus St. 21). Kids helped Rodion Petrov create the sweet fairytale with their own hands! 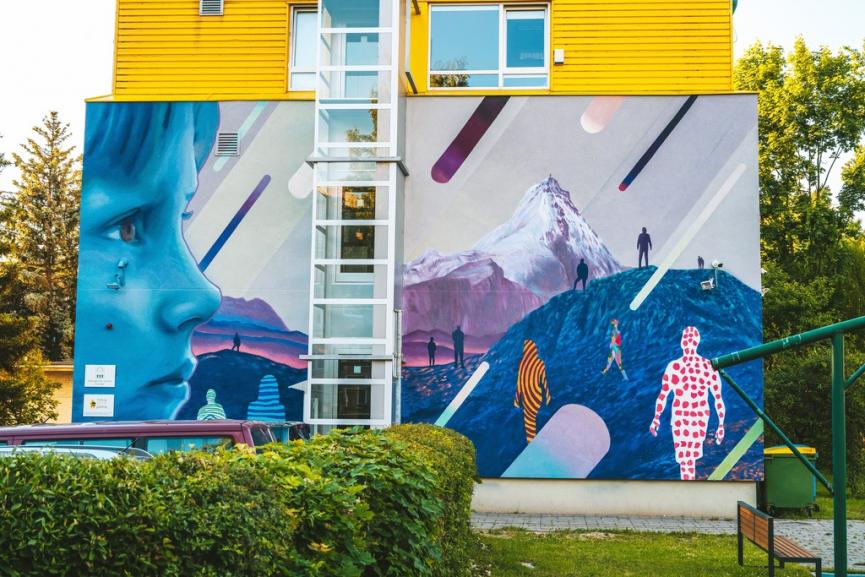 Kazys Varnelis, a Lithuanian artist that spent most of his life in the US, is best known for his optical art. His historic house museum is located in Vilnius, and recently one of his paintings was transferred on a facade of a Soviet monolith apartment block in the Lithuanian capital. Kaunas artists did the job, and the connection continues. Morfai interpreted the style of Varnelis and created a tradition-inspired yet contemporary drawing by the shore of Kaunas Reservoir. 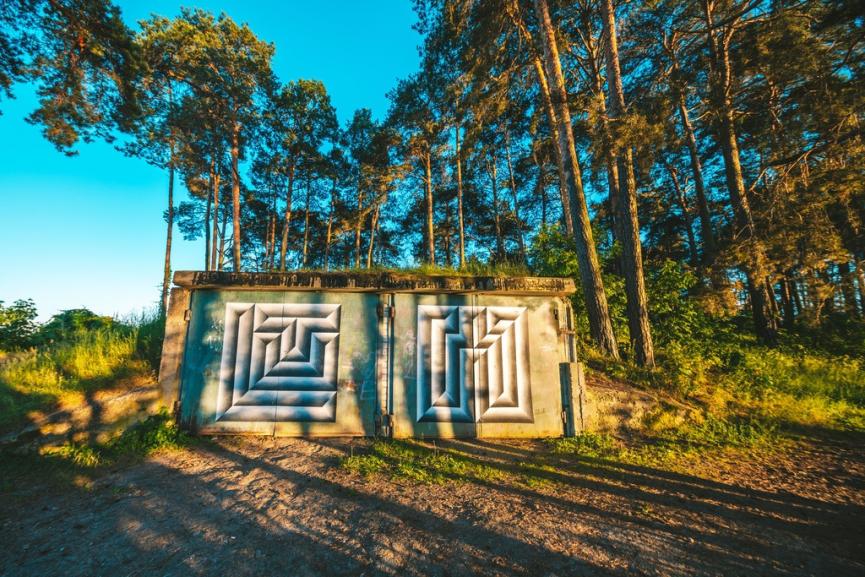 New murals are being created as we speak, so we might need to update this article sooner than later. Or, you can be faster than us and discover them by simply walking the streets of Kaunas. Not just the downtown – Šančiai, Dainava, Vilijampolė, Šilainiai and other parts of the city are getting more and more colourful. Additionally, you can discover the iconic street art of Kaunas with the It’s Kaunastic guide called “Wallographer’s Notes”. It’s available digitally at kaunastika.lt.

All photos by A. Aleksandravičius for Kaunas IN